The hybrid wardrobe has replaced business casual, as workers bring resortwear and sneakers to the office 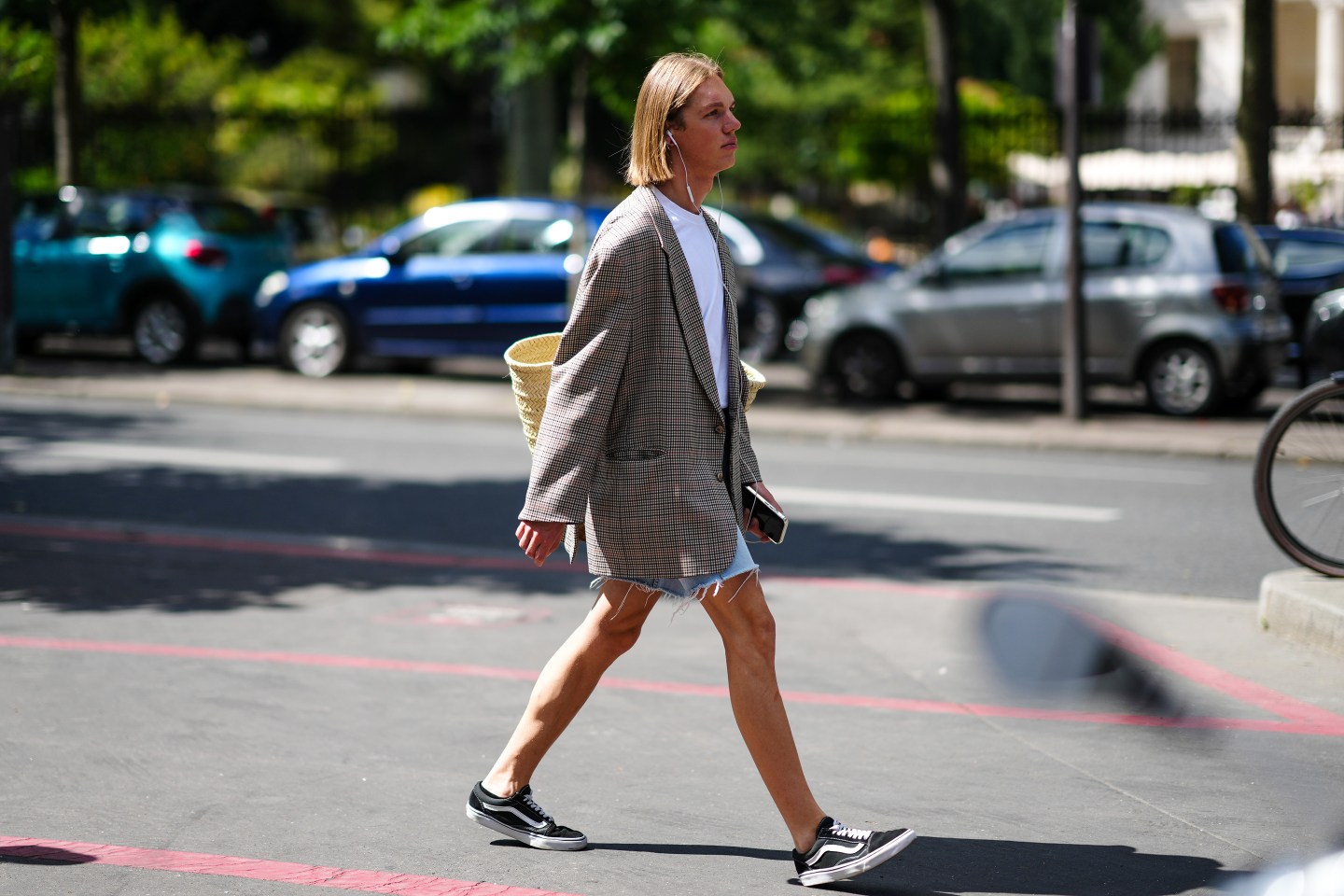 What we wear to work is changing now that many of us are on a hybrid schedule.
Edward Berthelot—Getty Images

On the eve of my first day at Fortune last month, I found myself standing in front of my closet with an age-old problem: I had nothing to wear.

It was a dilemma I hadn’t encountered in quite some time, having mostly worked from home in workout gear or sweats for the past two years. While I’d been going into the office on a hybrid schedule at my previous employer, company familiarity and colder weather made getting dressed simple—throw on jeans and a sweater and go.

But as I prepared to onboard in a new office for a new job, this felt different. There was a lot to consider: the pressure of a first impression and navigating a new office dress code, plus finding appropriate workwear that wouldn’t leave me sweating buckets during an NYC summer. An ongoing pandemic that has upended the workplace as we know it has only made shopping for new clothes that much trickier.

In an effort to avoid what-to-wear stress for the few days a week I’m in office, I’ve since dropped a lot of money on a new wardrobe. But I haven’t just been buying clothes for work: My social life has been on full speed between a backlog of wedding-related activities and a vacation. And since life in general costs a pretty penny right now, I’ve been strategizing how I can get the most ROI out of my clothing purchases, opting for pieces that I can wear at my desk and away from it.

White linen dress? Perfect for the office and my upcoming trip to Greece. Wide-leg trousers? Trendy enough for both a work party and a night out in the West Village. Plain blue tee? A quick solution when I’m running late for work or running a last-minute errand.

“Gone are the days of two separate wardrobes or even three separate wardrobes,” she tells me, explaining that we no longer have dedicated clothes for work, play, or lounging around the house. “We are blending it all together.”

It’s largely the result of the ever-evolving nature of work, as we’ve shifted from doing our jobs from our tiny apartments back to the office cubicle—or, for most of us, something in between. When major companies announced official return-to-office plans in March 2022, shopping app LTK saw a 166% increase in total monthly searches for workwear compared to October 2020, a spokesperson for the company says.

But balancing a hybrid work life has left many us questioning whether shorts are acceptable for the office, while new styles have us wondering if the pair we’ve owned since 2019 is even stylish or comfortable enough to wear three years later. Social media has accelerated fashion cycles during the pandemic, but inflation has made it difficult for us to afford to keep up with the trends.

“Money’s tight,” Rugolo says. “People don’t want to buy clothes that they’re not using across different aspects of their lives.”

People are looking for clothes they can wear every day of the week.
Daniel Zuchnik—Getty Images

It’s not just me. Annie Schuster, a 36-year-old, non-profit development director in Philadelphia has shopped for six different work wardrobes since 2020, ranging from business attire to work-from-home clothes to casual in-office wear—with a couple pregnancy wardrobes in between. She eventually found herself wearing the same clothes to work that she wore on the weekends.

“Dressing in the same style seven days a week is nice because it means you don’t have a whole separate work wardrobe,” she says. The caveat: She needed to buy more clothes because she didn’t have enough weekend outfits to sustain that fashion choice.

Many of us are trying to spend more intentionally on workwear as we attempt to stretch our clothing budgets, curating new post-pandemic wardrobes filled with stylish pieces that do double duty. That means what we’re wearing to work these days is also what we’re wearing everywhere else.

We want our clothes to reflect how we work

In a former life, Schuster used to wear pencil skirts and blouses to work. But when she wore that outfit to the office for a new job, she says she stuck out like “a sore thumb because everyone else was in jeans and T-shirts. It was definitely a cultural shift for me.”

On the LTK shopping app, orders for “stuffier” workwear like pencil skirts and slacks dropped during the pandemic, and stayed low, the spokesperson says. That’s not surprising since the 10% of workers who said they were wearing business formal attire—suits and tailored clothing—to work before 2020 dropped to 5% in 2022, per NPD research. Those wearing business casual also fell from 42% to 37%, losing share to “casual” dress for work, which grew from 32% to 40% and is defined by items like jeans and sneaks. Rugolo considers it a significant change.

Casual sneakers and flowy dresses are having their day in the office, she says. Also popular, as Schuster’s coworkers indicate, are tees that can be dressed up or down.

Casual sneakers and flowy dresses are having their day in the office.
Jeremy Moeller—Getty Images

And despite the hatred we seemingly developed for hard pants during the pandemic, jeans are another big winner as people return to the office, NPD’s research finds. Perhaps that’s because the hotly debated transition from a skinny fit to a looser style has made jeans more comfortable.

For men, Rugolo says, jeans have become what activewear is for women: Men who said they wear jeans five to seven days a week jumped from 36% in 2016 to 43% in 2022, similar to the trends of women wearing leggings.

The rise of athleisure and the resurgence of streetwear was already turning fashion more casual in the 2010s. The trend creeped into the workplace, as Silicon Valley billionaires oversaw their start-ups while wearing V-neck T-shirts, and fashion editors walked the halls of the glossies in Balenciaga’s Triple S Sneakers. Even Goldman Sachs loosened its dress code in 2019, making suits and ties optional.

These trends particularly influenced workwear in creative environments, where “people started feeling freer to incorporate the occasional elastic waistband or elevated slipper slide into their cubicle wardrobes,” Véronique Hyland, fashion features director at Elle and author of Dress Code: Unlocking Fashion from the New Look to Millennial Pink, tells me. “As white-collar work has evolved into a hybrid affair, those influences have only accelerated, and office uniforms are now hybrid themselves.”

Working from home has made it more difficult to sign off at the end of the day, further accentuating the feeling of being “always on.” Hyland says that also lends itself to the need for hybrid wardrobes.

“This lack of distinction between categories seems to point to increased slippage between work and life—if you’re always tethered to your job by Slack and email, are you ever really off the clock?” she says. “For millennials and Gen Z who may have multiple jobs or rely on freelance gigs, work versus play feels fungible, so it makes sense that work clothes and play clothes would merge, too.”

Designers are reinventing dressier styles with less structured and more forgiving silhouettes, reforming workwear staples for out-of-office wear, and making pieces once meant for the street now acceptable for a meeting with your boss.

Hyland points to a new line called Kind Regards that launched with a collection of hybrid two-piece jumpsuits “as a prediction about the future of workwear.” While designers have been trying to simplify office wear for years, this is more of a seismic shift, she argues.

Consider blazers, which Rugolo says have given way to a softer structure that women have been pairing with everything from leggings to shorts. British upmarket fashion brand ME+EM says it can’t keep pace with blazer demand, selling out six times faster than they did pre-pandemic. Active pants, too, have expanded to a wider leg that can pass for a run to the coffee shop or a day in the office.

Hybrid designs have become such a norm that it’s hard to even find more traditional work clothing at retailers these days. “Sometimes you have to kind of dig online if you’re looking for something specific that may not be available,” Rugolo says.

Sara Maxey, a 27-year-old accountant in Houston had a hard time finding an interview outfit at the mall recently. Her go-to business styles at J.Crew and Banana Republic were discontinued, and Nordstrom had one suit style available in limited sizes. She finally found something at Ann Taylor, but the pickings were slim. “I bought a suit there out of necessity but didn’t feel it fit my style,” she says.

The lack of availability, coupled with the comfortable WFH clothing she became accustomed to, is partly why she’s started integrating more casual pieces into her work wardrobe. She adds that her pre-pandemic work clothes also “feel tired.”

But the growing versatility of hybrid styles allows us to invest in pieces we’ll get multiple uses out of. Schuster increased her jean budget from $50 to $150 a pair, hoping that higher quality would make them last longer now that she’s wearing them more frequently.

Rugolo believes the longer we remain a hybrid workforce, the more likely a hybrid wardrobe will become permanent. That might be our new reality, considering that workers and bosses are playing tug-of-war over a return to office. If hybrid workers are the happiest, perhaps we’re also happiest in hybrid clothes

As for my first day of work outfit, I unknowingly settled on all the dominating officewear trends: casual sneakers with a matching white tee that I dressed both up and down with jeans and a blazer.