‘The only team in the world with no money who can buy every player’: So how is broke Barcelona doing it? 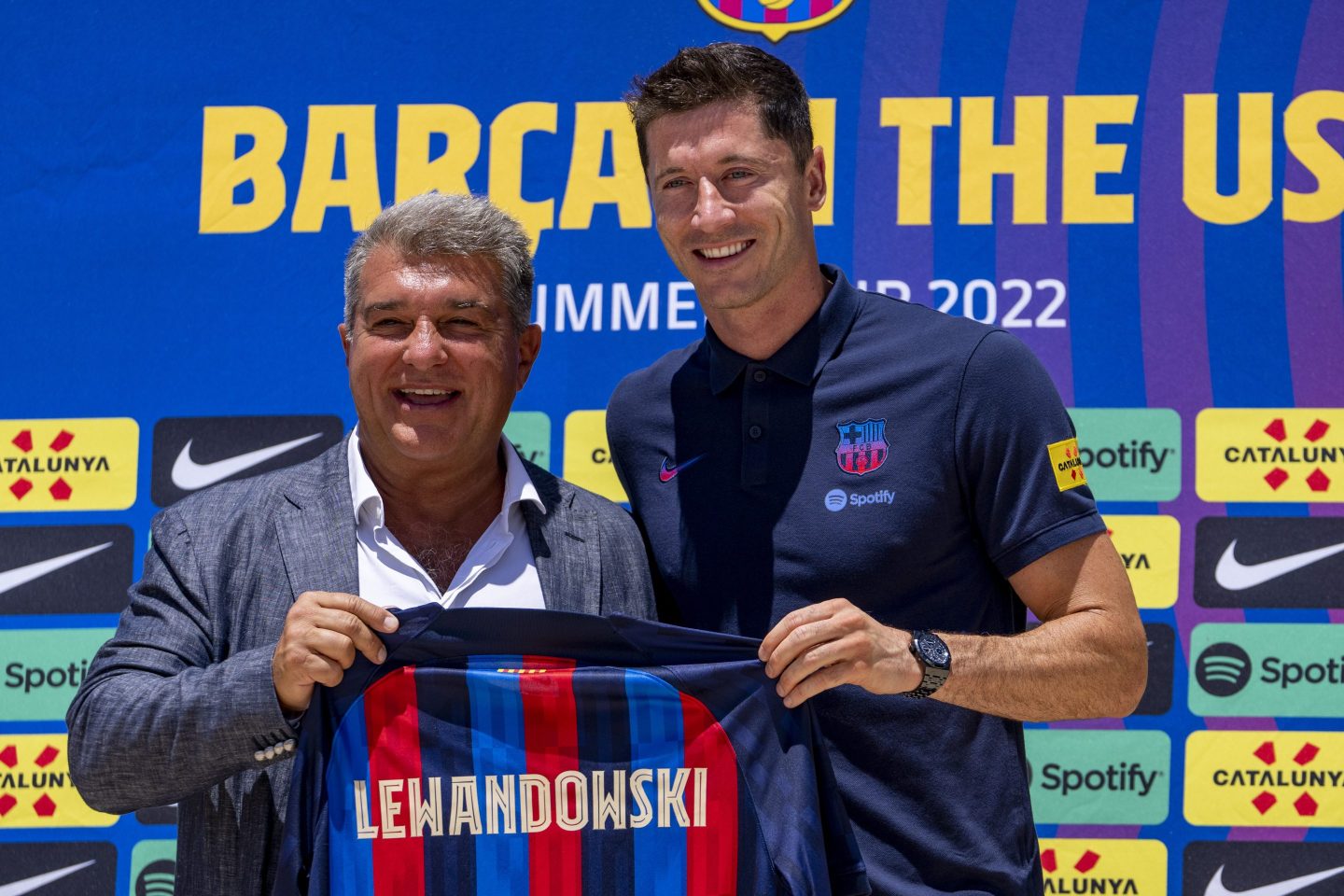 FC Barcelona may be mortgaging its future by signing a deal to give U.S. investment firm Sixth Street a 25% cut of its lucrative TV rights.
Eric Espada—Getty Images

In its bid to re-establish its dominance over global football, top-flight team FC Barcelona inked a television rights deal that can finance the heavily indebted club’s appetite for marquee players.

For a reported half-billion euros, the Catalan side gave U.S. investment firm Sixth Street a 25% cut of its future TV licensing receipts. In return, the immediate cash injection should free up the transfer of star Polish striker Robert Lewandowksi for an estimated 60 million euros ($61 million).

In a statement, veteran club president Joan Laporta praised the deal with Sixth Street negotiated over the past few weeks as a “meaningful increase in capital strength,” adding that management looked forward to its long-term partnership with the U.S. investment firm.

FC Barcelona has been struggling to keep pace with England’s rapid-fire commercialization of the sport, where Russian oligarchs, American tycoons, and Emirati sheikhs have poured billions into their clubs to sign the best players.

It prides itself on its ability to offer the world’s best football, relying on talent mainly brought up through the ranks and playing a style of attacking football revolutionized by club legend Johan Cruyff.

Yet Barça, one of the few football clubs fully owned by its members rather than billionaires, has been on a steady decline for years now after climbing to the very peak of club football.

The team hasn’t won Spain’s La Liga since the 2018–19 title. Even worse, it exited the Champions League after failing to advance past the group stage for the first time in 17 seasons. Sporting site AS called the humiliating departure a “resignation from the football elite.”

Believed to shoulder around 1.3 billion euros in debt, Barça would not have been able to sign its latest additions without Sixth Street’s help due to spending cap restrictions under the league’s financial fair play rules.

Nevertheless, the contract, which follows an initial 10% sale at the end of last month, had critics howling.

Germany’s leading football publication Kicker blasted the deal, approved in advance by the club’s membership last month, as a “sellout of its future.” ESPN wrote that Barça has “basically taken out a massive mortgage on their future to a degree no other team has done in the past.”

TV rights are the most lucrative source of income for a club, next to corporate sponsorships, membership dues, ticket sales and merchandising. According to the most recent figures, Barca hauled in nearly 166 million euros, more than any other club in Spain’s La Liga.

More than a club

Bayern coach Julian Nagelsmann, who is losing Europe’s best player Lewandowski to Barcelona, called it “the only club in the world that has no money but can buy every player.”

Whereas companies are founded to generate profits, teams must win silverware, and for fans of the Blaugrana spoiled by success during the glory days of their talismanic player, Lionel Messi, times have been brutal of late.

Just as important as its success on the pitch is its meaning to the broader Catalan society. The signing of Lewandowski, is meant to restore the club’s, and the region’s, wounded pride.

As its motto Mes que un club literally states, Barcelona is “more than a club.”

It is a cultural institution, internationally perhaps the most prominent symbol of the autonomous region’s ethnic identity, and remains as a result—whether it wants to or not—a flag bearer of the ongoing movement for self-determination even after Spain’s bloody crackdown in 2017.

The financial strains resulting from two years of a pandemic, however, have been reshaping the economics of the sport.

A dozen of the best-known teams from Spain, Italy, and England, including Barcelona, risked outrage by announcing the creation of a new European Super League in a bid to replenish their depleted coffers. It was abandoned within days following a backlash by Premier League fans who opposed further commercialization of the sport.

With few options to drum up cash, Barça president Laporta was forced to let Messi leave last season to Qatar-backed rival Paris St. Germain. The decision came despite the seven-time footballer of the year been all but raised by the club, which paid for his hormone treatments and honed his skills at the sport’s most famous youth academy, La Masia.

More recently Barça made the fateful decision in April to monetize its global popularity by opening membership up to anyone around the world.

Previously it had prohibitively high hurdles designed to ensure members given a vote in the club’s leadership lived in Catalonia and had a long-lasting connection to the club—at best handed down through the family from one generation to the next.

The Sixth Street deal may buy time for Barça to return to Europe’s elite, but it could come at the cost of future success.