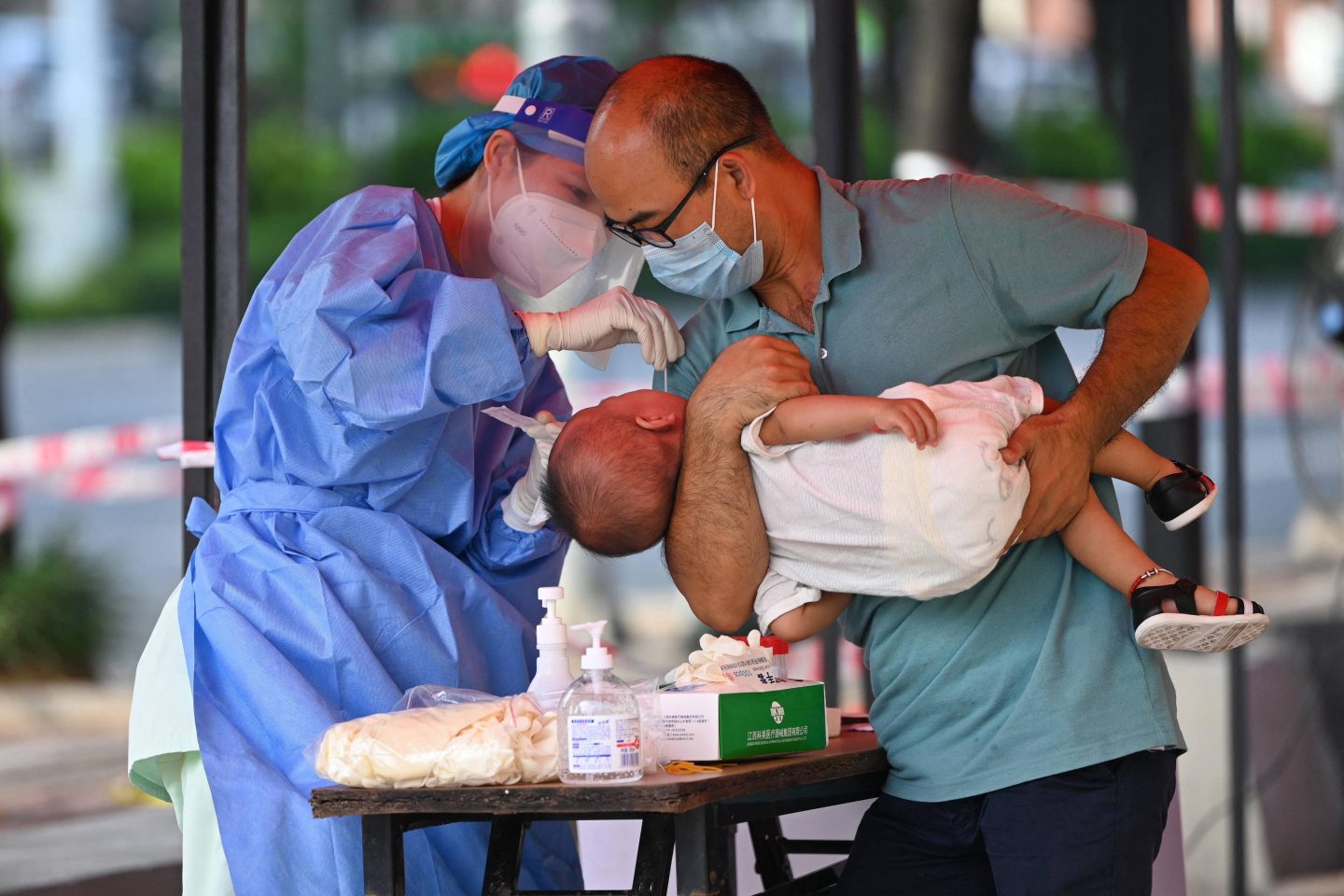 A health worker takes a swab sample from a baby for a Covid-19 test in Nanning, China on July 19, 2022.
AFP/Getty Images

No, China is not easing its COVID rules or opening its borders any time soon.

That’s the message China’s top health official seems to be sending to the Chinese public amid speculation that China finally may be rolling back its COVID-zero policy.

“The latest COVID-19 control playbook is not about relaxing rules, but about precision, which requires greater efforts to grasp prevention and close loopholes,” Chinese vice-premier Sun Chunlan said during a visit to China’s northern Hebei province this week, according to Chinese state media.

For the last two years, China’s government has barely deviated from a strict zero-tolerance policy for COVID infections, subjecting residents to harsh lockdowns, constant testing, and trips to centralized quarantine facilities when outbreaks arise. Recently, China’s government has made some slight adjustments to the policy, namely reducing mandatory hotel quarantine periods from 21 or 14 days to seven for people entering the country.

Business leaders cheered the policy change and some took it as a sign that China may finally be opening up its borders like virtually every other country on earth has done since the mass rollout of COVID-19 vaccines.

“It will really bring businesses and people’s lives back in China,” Allan Zeman, a prominent Hong Kong businessman told the South China Morning Post about China relaxing its quarantine period. “Seven days is a good step in the right direction, and a good indication that China is controlling the outbreak well and has confidence.”

But even as China has reduced quarantine periods, its COVID-zero policies remain as strict as ever in other ways.

COVID cases have steadily climbed in recent days amid the rise of the BA.5 subvariant of Omicron. China’s daily caseload topped 1,000 this week for the first time in two months. In response to the outbreaks, authorities have launched citywide testing campaigns and localized lockdowns in areas across the country. Some residents, traumatized from past lockdowns that have lasted as long as several months, have tried to flee areas with known cases to escape new stay-at-home orders.

Shenzhen, a tech metropolis in southern China, is recording a few dozen COVID cases per day, prompting authorities to seal off the residential compounds of positive cases. After authorities found cases in a Shenzhen neighborhood, people jumped a fence and broke down barricades to escape the district and avoid being locked down, according to a recent viral video.

Other cities like Shanghai, Chengdu, and Lanzhou have also implemented citywide testing measures and localized lockdowns due to new outbreaks. An outbreak in Beihai, a coastal vacation destination, pushed authorities to lock down the city of 1.9 million last weekend, stranding over 2,000 tourists. In total, 264 million people, or nearly one in every five Chinese citizens, is living in a full or partial lockdown, Japanes bank Nomura wrote in a note earlier this week.

Sun acknowledged that China’s public may feel “weariness and fatigue” from the COVID measures, but said that China must overcome those feelings to ensure a “successful opening of the 20th Communist Party Congress” this fall.

At the autumn conference, Chinese President Xi Jinping is expected to clinch an unprecedented third term in power. China’s government will likely maintain its COVID-zero policy until at least then since Xi prioritizes stability above all else, says Yanzhong Huang, senior fellow for global health at the Council on Foreign Relations.

“Xi does not want to have any surprises that derails his leadership transition process,” says Huang. He says that China’s leaders will avoid a mass COVID outbreak at all costs this year. Chinese leadership likely believes that the chaos of lockdowns and quarantines would pale in comparison to having hospitals across the country overrun with COVID patients and the appearance that the government had lost control of the outbreak.

Before the conference, “Xi’s top priority is to make sure the worst case scenario does not happen even though China [through COVID zero] has to pay dearly for achieving that.”