AIG nearly imploded during the 2008 financial crisis. Its turnaround plan includes giving 6,000 of its employees to Accenture 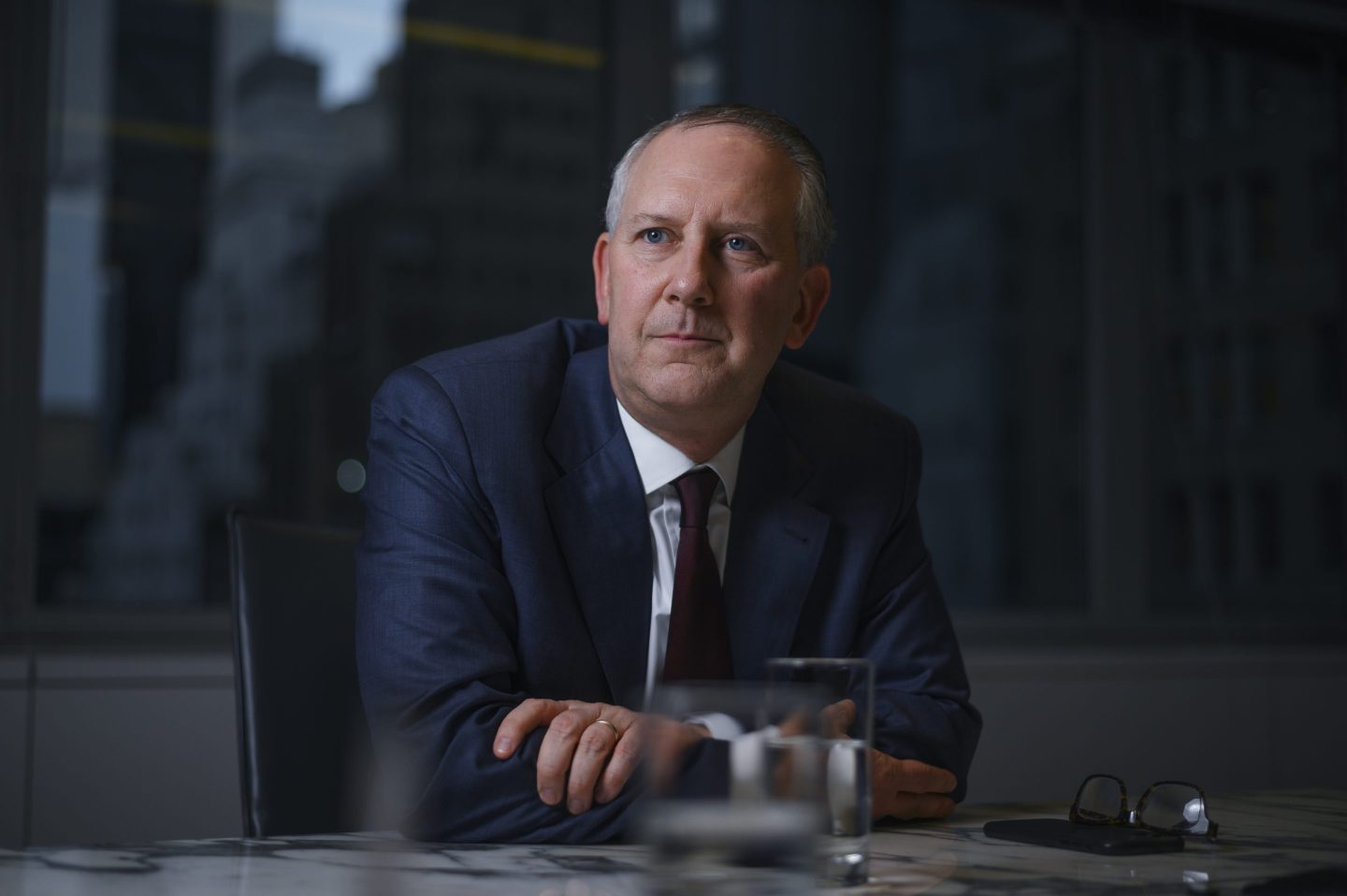 Peter Zaffino needed some crucial information, fast. He was stunned to find that it didn’t exist.

The year was 2017, and he had just arrived as the new chief operating officer at AIG. Later that year he also became CEO of the insurance company’s biggest business, General Insurance, which sells a wide range of property, casualty, liability, and other insurance. This business was floundering. “Get me an account list,” he recalls saying. “I want to see underwriters’ names, who performs well, who doesn’t—I want to learn from both.”

But when the company looked through its systems, it discovered that underwriters’ names weren’t linked to specific policies. That was worse than just sloppy record-keeping. Underwriting, evaluating a customer’s risk profile and calculating how much to charge for coverage, is the skill most fundamental to an insurer’s success or failure. Financial results showed that AIG was terrible at it. “No one knew who underwrote what in the commercial auto and trucking division,” says Zaffino, now AIG’s CEO.

That early shock was a sign of bigger challenges to come in the following years. Turning around underwriting was just one step in what would become a multi-year transformation. Today, most Wall Street analysts believe AIG is executing a remarkable broader turnaround, much of it achieved during the pandemic. The company’s performance in this year’s first quarter “confirms a turnaround fully underway,” according to the Keefe, Bruyette & Woods analyst team, which gave the stock an “outperform” rating. At Barclays, analyst Tracy Benguigui cited AIG’s “strong underwriting acumen,” among other factors, as reason to expect a rising stock price.

The overall turnaround wouldn’t have happened if AIG hadn’t taken a multipronged approach that included fixing underwriting and designing and executing a global transformation program, which included forging an innovative partnership with Accenture. That partnership began after a serendipitous meeting with Accenture CEO Julie Sweet in December 2019. Together, the two companies worked on several elements of the turnaround, including technology transformation, new digital workflows, and an initiative that resulted in 6,000 AIG employees becoming Accenture employees en masse—“the most people we’ve ever taken on at one time,” Sweet says. Along the way, she recalls, “I had the fun of telling Peter, ‘Our chief technology officer is personally involved, and he has said to me that you have not just the worst tech in the industry, but it may be in the top three he has ever seen.’”

Recovering from the crisis

For those not in the insurance industry, AIG slid into obscurity after the 2008 financial crisis. Founded in 1919, it had grown into a global colossus and America’s biggest insurer, ranking No. 9 on the 2006 Fortune 500 list. As the U.S. housing bubble swelled in the early 2000s, the firm became a huge seller of credit default swaps, a form of insurance against defaults in credit contracts. When the bubble burst and the crisis peaked in September 2008, AIG couldn’t come up with the money it suddenly owed to major financial institutions. “The government concluded AIG was too big to fail and committed more than $180 billion to its rescue,” a report by the Financial Crisis Inquiry Commission later said. That rescue remains the largest corporate bailout in U.S. history. By the end of 2008, AIG had lost 98% of its value.

The company struggled to recover, hobbled by its newly tarnished reputation. Some 20,000 employees departed or were laid off in the immediate aftermath, and the company struggled to replace high-level executives because top performers at competitor firms were put off by the weakened AIG brand. Employees who remained were disheartened and pessimistic, and multiple leaders seemed unable to revive the company. When the board promoted Zaffino from COO to CEO in March 2021, he was AIG’s eighth chief executive in 16 years.

Even before his arrival as COO, when Zaffino ran Marsh & McLennan’s insurance brokerage and risk management business, he had identified what was wrong at AIG: nearly everything. Once at AIG, recruiting a new executive team became urgent. Zaffino, 55, is “a guy who makes sure his teams deliver,” says Andrew Kligerman, a longtime insurance analyst at Credit Suisse. “He pushes people to task and makes sure they’re the right people to get those tasks accomplished.” Getting outsiders to join AIG was still a tough sell, but Zaffino had been building his contacts list since childhood. His father was a prominent insurance executive and would host dinner parties on weekends, Zaffino recalls. “I got to know his contemporaries. That helped me a lot when I became a CEO [of a Marsh & McLennan subsidiary] at a young age.” Today, nine of AIG’s 12 senior executives were appointed by Zaffino.

Fixing AIG’s worst-in-class data system was also a pressing matter. The company had millions of customers, but insurance claims were on paper and had to be entered slowly and laboriously into a manual data system. Digitally transforming the organization would be a massive undertaking.

In mid-2019, AIG’s general counsel, Lucy Fato, called Sweet. They had met years earlier, when both were partners at top-tier New York City law firms. The company Sweet runs, Accenture, is a consulting giant that provides infotech services to companies worldwide. Fato briefed Sweet on Zaffino’s turnaround plans at AIG and recommended that the two connect.

“He looked at me and said, ‘I don’t like consultants,’” Sweet recalls of their first meeting over lunch. “He’s very direct.” That was fine with her. She says she doesn’t consider herself a consultant because “they don’t commit to outcomes. They’re not a partner.” After a long discussion, she and Zaffino agreed to work together.

To kick off AIG’s infotech transformation, Zaffino planned to build a shared-services center—an entity that would handle multiple tasks for AIG’s various business functions, including HR operations, claims resolution, actuarial operations, and finance. The company had some 6,000 employees at data centers in Malaysia and elsewhere who could transition to the relevant tasks.

But Sweet had her doubts, urging Zaffino to consider a different path in light of AIG’s need for speed and lack of in-house experts. Accenture, on the other hand, had decades of experience building and running shared-services operations and leading-edge data centers. It didn’t need to learn how this was done. Zaffino agreed.

Thus began the plan to convert those 6,000 AIG employees to Accenture employees. In the highly regulated insurance industry, the proposal required approval from state insurance commissioners and foreign governments, which came through in nine months—lightning speed for regulators. The handover took place in January 2021, and the AIG locations where the 6,000 employees previously worked became Accenture offices. Since then, Accenture says, 17% have been promoted and nearly 76% have participated in training on digital technologies, including machine learning and automation.

Accenture says dramatic improvements are already apparent. Some claims are processed twice as fast, for example. AIG has also gained capabilities from the technology transformation. At one time, Sweet says, it was virtually the only company in the insurance industry without an underwriting platform, a software system for evaluating risks and calculating premiums; now it has one. Accenture isn’t yet processing all of AIG’s claims but is taking on more of them.

Ensuring that Zaffino’s top team was fully integrated with Sweet’s was one of his most important priorities from the start. That step may sound routine, but Sweet says it’s a key part of the story. The relationship between teams that CEOs tap for a project is just as critical as the relationship between the CEOs themselves. “You have to dedicate the right people,” Sweet says. “Peter has a great team, and I have a great team, and they became one team.” It doesn’t always work out that way.

While most Wall Street analysts are optimistic about AIG’s future, investors remain leery. It’s hard to blame them, given AIG’s past. The stock price has been volatile over the past five years. “That’s usually a sign that investors are uncertain about the company’s real prospects,” says Bennett Stewart, former CEO of the EVA Dimensions financial analysis firm, which is now part of ISS Governance. “Is the company back on track for real, or is it just setting itself up for another fall?” He says that if investors expected AIG’s economic profit—return on capital minus cost of capital—to merely remain flat, the stock would be higher.

Zaffino realizes AIG can’t change perceptions fast. “People need to see it,” he says. “It just takes time.” He’s willing to be patient with results. “If we don’t lay the foundational work—two hard years or more of just grinding it out—then we’re not going to get there. I don’t think we took any shortcuts at all, and it took a lot of time to get it right.”

Looking ahead, Sweet says that “through this experience we’ve learned a lot to help others.” She’s not just talking about companies as beaten-down as AIG was. “Most companies are facing massive transformation, and it’s easy to get overwhelmed,” she says. To avoid that, she counsels taking one step at a time, as AIG did with shared services, rather than trying to address all issues at once. Value progress over perfection, she says, and have a clear road map.

Sweet’s bottom-line lesson, which is guidance for business leaders everywhere, is the importance of joint teams with partners. Forming and maintaining genuine joint teams isn’t easy, she says, but “if you want to move with speed, that’s what you have to do.”

As for AIG’s future, it’s unlikely the company will return to its glory days, but it finally seems to have overcome its lowest point. “AIG has morphed from the global leader in insurance, to a vulnerable company that was brought to its knees, and now to a market leader,” says Credit Suisse insurance analyst Kligerman. “It’s a legendary company, and it’s just great to see that they’re back on a bright path.”