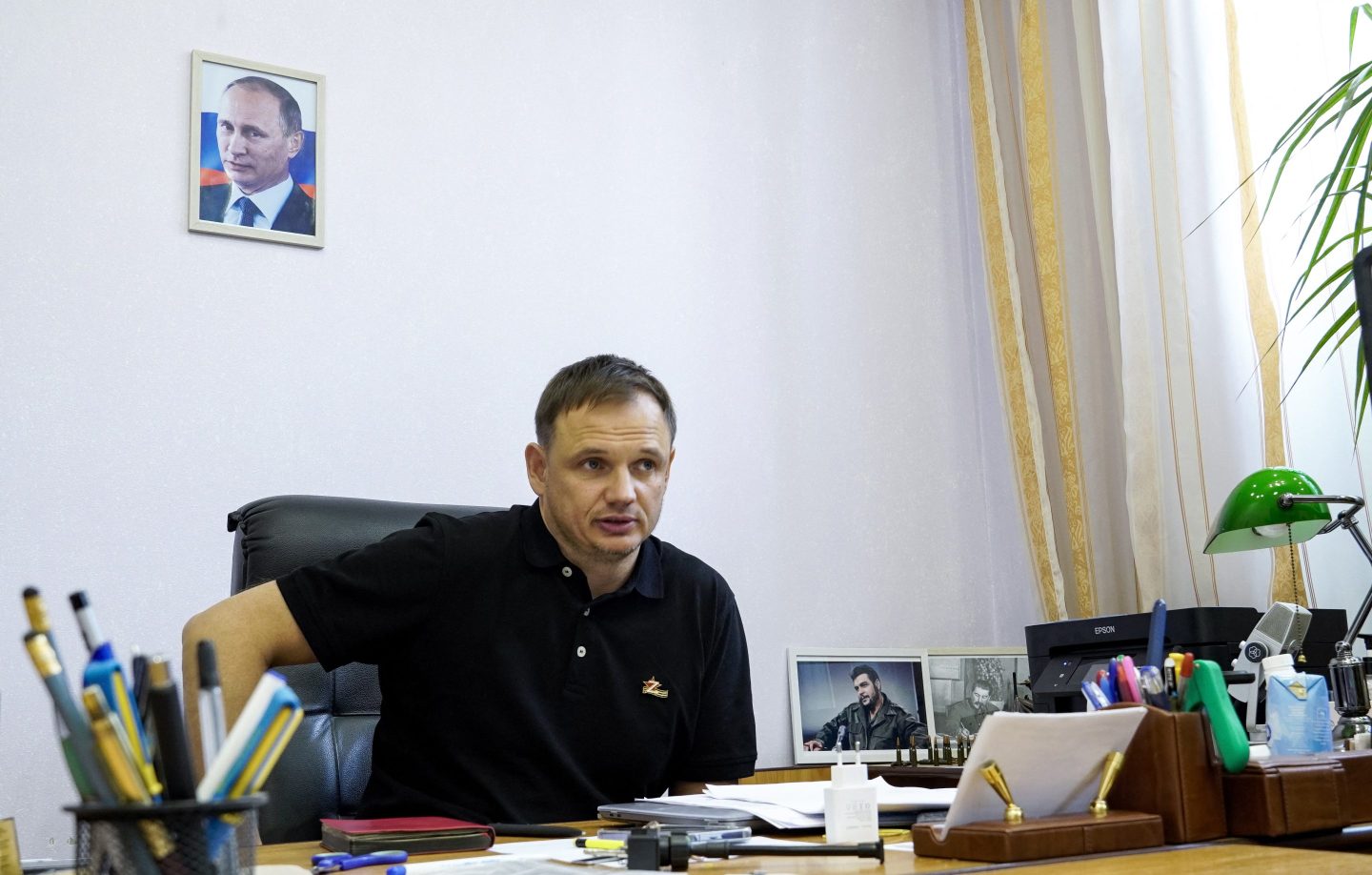 Kirill Stremousov, deputy head of the Russian-installed Kherson administration, is pictured in his office, with a portrait of Russian President Vladimir Putin seen on the wall behind him, in the city of Kherson on July 20, 2022.
Stringer—AFP/Getty Images

Putin’s plan for Ukraine is becoming clearer to U.S. intelligence agencies, as Washington refuses to rule out further sanctions in the future to counter the Russian president’s “annexation playbook” in Ukraine.

“Russia is beginning to roll out a version of what you could call an annexation playbook,” Kirby said, drawing similarities with how Russia absorbed the Crimean peninsula—formerly under the administration of Ukraine—in 2014.

Russia’s first step, which is already playing out, will be to control the political narrative in Ukraine through pro-Russia officials, especially in the parts of the country the Russian army has already claimed, according to Kirby.

“Already, Russia is installing illegitimate proxy officials in the areas of Ukraine that are under its control,” he said, adding that the Russian government is combing through “detailed plans” to run the political narrative and eventually annex eastern Ukrainian provinces including Kherson, Zaporizhzhia, Donetsk, and Luhansk.

Should Russia be able to annex these four states, it would create a contiguous land border in eastern Ukraine connecting Russia with Crimea.

Kirby said that Russian bureaucrats and figures with “no connection” to Ukraine were already being implanted in various official and administrative positions in these regions. Kirby also added that local referendums on joining Russia could be held before the end of the year, possibly at the same time as Russia’s regional elections next September.

In 2014, around one month after the Russian army invaded Crimea, local officials held a referendum to gauge public interest in joining Russia or remaining part of Ukraine. The official results showed that more than 95% of voters supported joining Russia, although voting irregularities led the U.S. and the United Nations to quickly declare the referendum invalid and illegitimate.

Putin’s plan to annex eastern Ukraine also involves absorbing Ukrainians into Russia’s financial and social systems, according to Kirby, as Russia is devising plans to control the country’s monetary and economic system by introducing Russian banks and currency.

“Russia is attempting to set conditions on the ground by seeking to establish branches of Russian banks to establish the ruble as the default currency in these areas,” he said.

The Russian army is also looking to control more of Ukraine’s broadcast towers and replacing local telecommunications networks with Kremlin-approved ones, and is actively seeking to “sabotage civilian Internet access,” among Ukrainians suspected of engaging in resistance activities.

The fast-track citizenship option has been offered to Ukrainian citizens in Kherson and Zaporizhzhia since May, while Donetsk and Luhansk residents have had access to a simplified track since 2019. In 2014, shortly after the Russian annexation of Crimea, thousands of Crimean residents were compelled to sign up for Russian passports.

Kirby emphasized that both U.S. and international law deemed such acts of annexation as illegal and illegitimate, and suggested that the U.S. would respond to these actions with heavier sanctions targeting Russian officials placed in charge of Russian-controlled parts of Ukraine, as well as providing more military support for the Ukrainian army.

Later this week, the U.S. will send a new weapons package to Ukraine as its army continues its fierce confrontations with Russia in the eastern provinces. The new package will include more American-made mobile rocket-launch systems known as HIMARS, Kirby said, which military analysts have said could potentially tilt the war in Ukraine’s favor. Ukrainian officials have praised HIMARS as a “game changer” during the war.