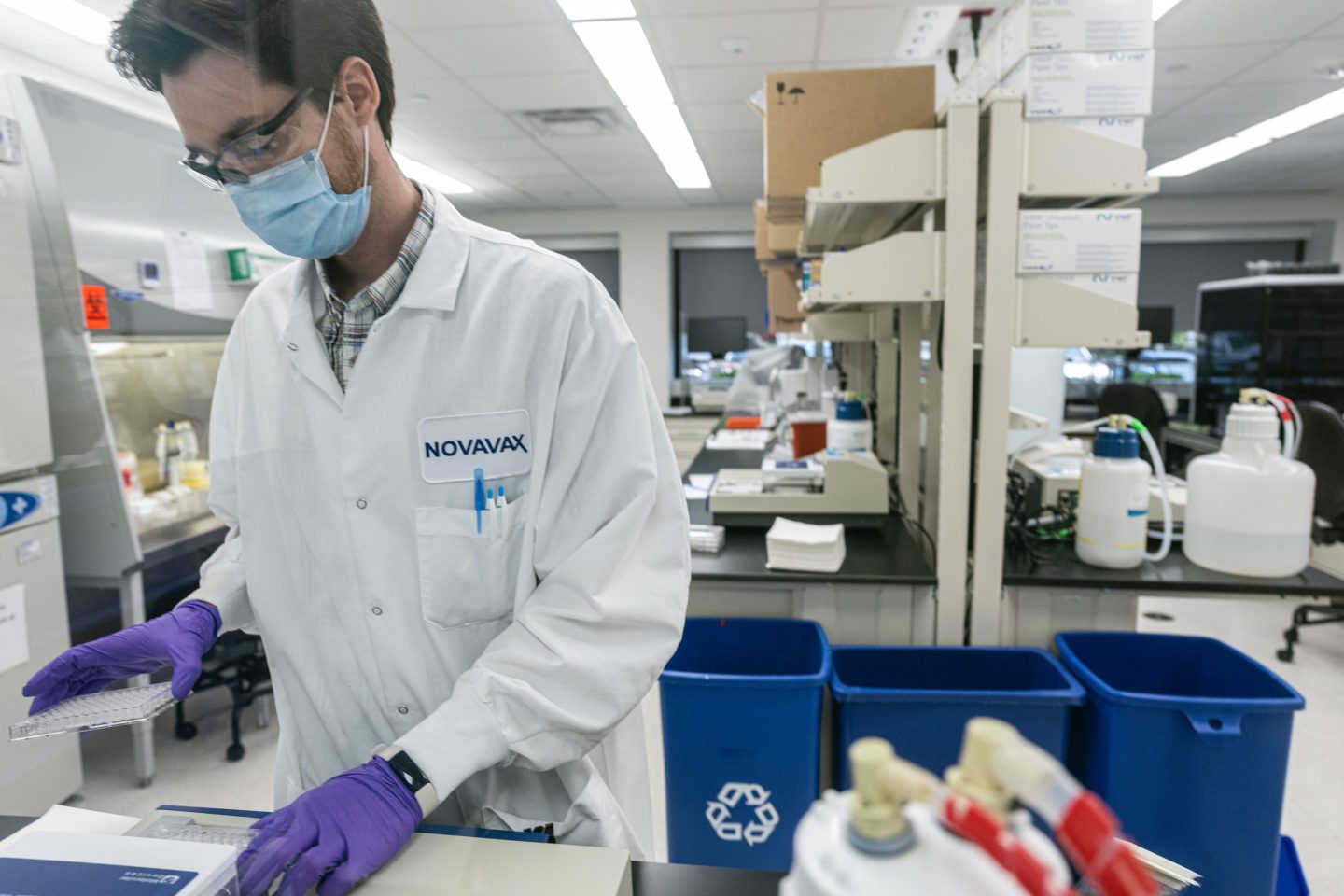 A scientist works in a laboratory at the Novavax facility in Gaithersburg, Md.
Jon Cherry—Bloomberg/Getty Images

On Wednesday, the U.S. Centers for Disease Control (CDC) approved the COVID-19 vaccine from Maryland-based vaccine maker Novavax, unlocking the 3.2 million doses that the U.S. government has purchased from Novavax for widespread distribution.

“Today is another step forward in our nation’s fight against the virus,” U.S. President Joe Biden said in a statement about the Novavax approval on Tuesday. Novavax’s vaccine is already approved in dozens of countries around the world, but the U.S. may prove a critical market for the company, given its large population and relatively low vaccination rate.

When Australia approved Novavax’s COVID vaccine in January, 92.8% of the country’s population was fully vaccinated, giving the company a tiny market for its primary two-dose regimen. Australia’s approval of Novavax’s jab as a booster provided a bigger opportunity, but since January Australia has administered just 167,800 doses of the vaccine, a tiny fraction of the 60.6 million doses the country has received as a whole. Investors seemed to acknowledge the limitations of the Australian market. After the vaccine won approval there, shares jumped just 1.5%.

By contrast, nearly one-third of U.S. adults are still not fully vaccinated, meaning tens of millions of Americans are eligible to receive Novavax’s primary vaccine regime. For now, Novavax’s COVID vaccine is only available to American adults who have not yet been vaccinated for COVID-19. If Novavax wins approval as a booster and as a primary COVID vaccine regimen for children, even more Americans could receive the jabs.

Novavax investors recognized the importance of unlocking the U.S. market, sending shares up 11.5% on Tuesday.

The U.S. government is optimistic too; it hopes that Novavax’s approval will convince some vaccine skeptics to get their first doses.

“If you have been waiting for a COVID-19 vaccine built on a different technology than those previously available, now is the time to join the millions of Americans who have been vaccinated,” CDC director Rochelle Walensky said in a statement on Tuesday.

Novavax vaccine vs. Pfizer and Moderna

In the U.S., there are at least some people who have been holding out on getting vaccinated until the U.S. government approved the Novavax vaccine. Many of these so-called Novastans prefer Novavax’s protein-based vaccine technology to Pfizer and Moderna’s mRNA-based jabs.

Novavax uses a more traditional vaccine technology than Pfizer and Moderna. Protein subunit vaccines like Novavax’s have been widely used for decades starting with a successful hepatitis B vaccine over 30 years ago. MRNA vaccines, meanwhile, had never been approved for use before COVID-19. The protein subunit vaccine deploys harmless COVID-19 proteins and an adjuvant (an ingredient to help bolster immune responses) to help the immune system respond to COVID infections. MRNA technology, on the other hand, uses a genetic code to teach the body how to respond to COVID-19 infections.

“We think vaccine choice is important, particularly as we expect to see ongoing surges of COVID-19 and work to increase vaccination rates,” said Novavax CEO Stanley Erck in a press release.

CDC officials estimate that 26 million to 37 million people in the U.S. have not been vaccinated, and it’s unclear how many of them might be holding out specifically for the Novavax vaccine. The fact that highly effective vaccines have been readily available for nearly two years in the U.S. without more widespread uptake makes some experts skeptical.

“Some say they don’t want an mRNA vaccine, so this [Novavax] protein vaccine can be an alternative. But other people might say, ‘I just don’t like vaccines, period,’” Robert Schooley, an infectious disease doctor at UC San Diego Health, recently told CNBC.

For Novavax, the approval marks the end of a drawn-out regulatory process that was plagued with manufacturing issues. But now the company may finally be able to contribute to the U.S.’s fight against COVID-19.

“More people need to roll up their sleeves, particularly as we confront [the Omicron subvariant] BA.5,” Biden said in a press release.