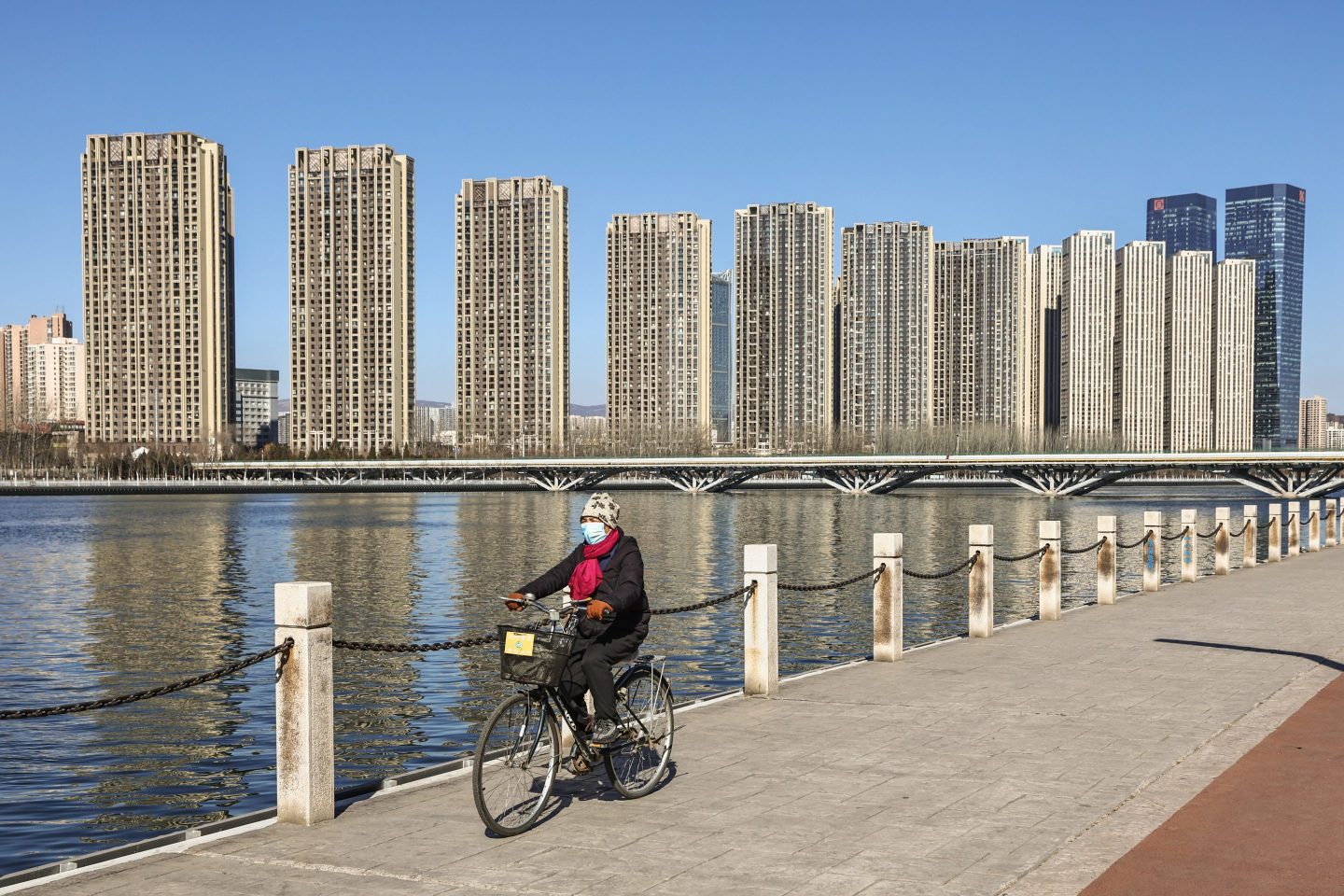 A cyclist rides past residential buildings on the banks of a river on March 1, 2022 in Taiyuan, Shanxi Province of China.
Hu Yuanjia—VCG/Getty Images

Former UBS Group AG economist Jonathan Anderson once called it “the most important sector in the universe.”

More than a decade on, Chinese property is again grabbing the attention of global investors—this time for all the wrong reasons.

Mounting signs of stress this week in an industry that accounts for about a quarter of the world’s second-largest economy have roiled China’s credit markets, dragged down the nation’s bank stocks and pummeled commodities from iron ore to copper.

After a burst of optimism earlier this year that looser regulatory curbs might stem the industry’s debt crisis, investors are getting spooked by rolling COVID lockdowns and a rapidly escalating homebuyer boycott of mortgage payments on stalled projects. The bigger worry is that a widespread loss of confidence in real estate will put major strain on China’s economy and financial system, which is sitting on 46 trillion yuan ($6.8 trillion) of outstanding mortgages and still has 13 trillion yuan of loans to the country’s beleaguered developers.

“Property has been getting steadily worse the whole time; prices, sales, starts, all terrible,” said Craig Botham, chief China economist at Pantheon Macroeconomics in London. “The chronic deterioration has now taken another step. It was always going to hit the financial sector eventually, given the prevalence of collateral in loan books with large real estate portions.”

What started as trouble with China Evergrande Group is now snowballing into a crisis that risks engulfing the majority of the country’s developers, its biggest lenders and a middle class that has significant wealth tied to the property market. China’s home prices have tumbled 10 months straight, according to data released on Friday.

“The whole pyramid is collapsing now,” said Anne Stevenson-Yang, co-founder of J Capital Research Ltd. “What’s different is that things are worse now because of the Evergrande crisis a year ago, which is spreading its tentacles throughout the Chinese economy.”

The turmoil this week has battered what was already one of the world’s most stressed industries. The average yield on Chinese junk dollar debt, which is dominated by developers, has surged to almost 26%. Selling has also spread to investment-grade builders, with a bond issued by China Vanke Co., the nation’s second-largest builder by sales, falling to a record-low of 81.6 cents on the dollar on Tuesday.

China’s COVID Zero policy is exacerbating the situation by damping demand for property and depressing economic activity. Lockdowns remain commonplace in China, which continues to stick to a policy of keeping out the virus with stringent curbs. A recent flareup in Shanghai has spurred concern the city could be heading for another lockdown.

Concern that mortgage boycotts will lead to a rise in souring loans sent a gauge of Chinese bank shares to its lowest level since March 2020.

Chinese authorities held emergency meetings with major banks this week to discuss the mortgage boycotts on concern that more buyers may follow suit, according to people familiar with the matter. Some lenders plan to tighten their mortgage lending requirements in high-risk cities, two of the people said.

The housing ministry in Xi’an became one of the first government agencies to address the issue publicly, saying it will penalize developers who cause social incidents due to failure of project delivery.

Homebuyers have stopped mortgage payments on at least 100 projects in more than 50 cities as of Wednesday, according to researcher China Real Estate Information Corp. That’s up from 58 projects on Tuesday and only 28 on Monday, according to Jefferies Financial Group Inc. analysts including Shujin Chen.

“If more home buyers cease payment, the spreading trend will not only threaten the health of the financial system but also create social issues amid the current economic downturn,” Betty Wang, a senior economist at Australia & New Zealand Banking Group Ltd., wrote in a note Thursday.

Banks are rushing to reassure investors that risks from loans to homebuyers were controllable, with at least 10 firms issuing statements. State-owned Agricultural Bank of China Ltd. said it held 660 million yuan of overdue loans on unfinished homes, while smaller rival Industrial Bank Co. said 1.6 billion yuan of mortgages were impacted, of which 384 million yuan have become delinquent.

Nomura Holdings Inc. said the refusal to pay mortgages stems from the widespread practice in China of selling homes before they’re built. Confidence that projects will be completed has weakened as developers’ cash woes intensified.

Nomura economists led by Ting Lu estimate that Chinese developers have only delivered around 60% of homes they presold between 2013 and 2020, while in those years China’s mortgage loans rose by 26.3 trillion yuan. GF Securities Co. expects that as much as 2 trillion yuan of mortgages could be impacted by the boycott.

Housing in China has gone from being a sure bet over the past two decades to a growing risk. The government cracked down on leverage in the real estate industry, helping drive up debt refinancing costs for developers and triggering a record wave of defaults. Home sales tumbled 41.7% in May from a year earlier, with investment dropping 7.8%.

The real estate industry has an oversized impact on the economy. When related sectors like construction and property services are included, real estate accounts for more than a quarter of Chinese economic output, by some estimates. About 70% of household wealth is stored in property, along with 30-40% of bank loan books, while land sales account for 30-40% of local government revenues, according to Pantheon Macroeconomics’ Botham.

The worsening crisis will test authorities’ ability to minimize the fallout. Earlier this year, China was setting up a stability fund to provide support to troubled financial firms as risks to the economy grow. Handling such issues will be also key for President Xi Jinping ahead of a leadership confab widely expected to cement his rule for life.

The slowdown in construction is also hurting demand for building materials. Iron ore slumped more than 8% on Thursday, falling below $100 a ton for the first time since December. A year ago, iron ore was trading comfortably above $200 a ton, with China’s wave of Covid-era stimulus feeding a boom for property and the steel market. Futures for steel rebar in construction collapsed in Shanghai to their weakest since 2020. Copper dropped for a fifth day.