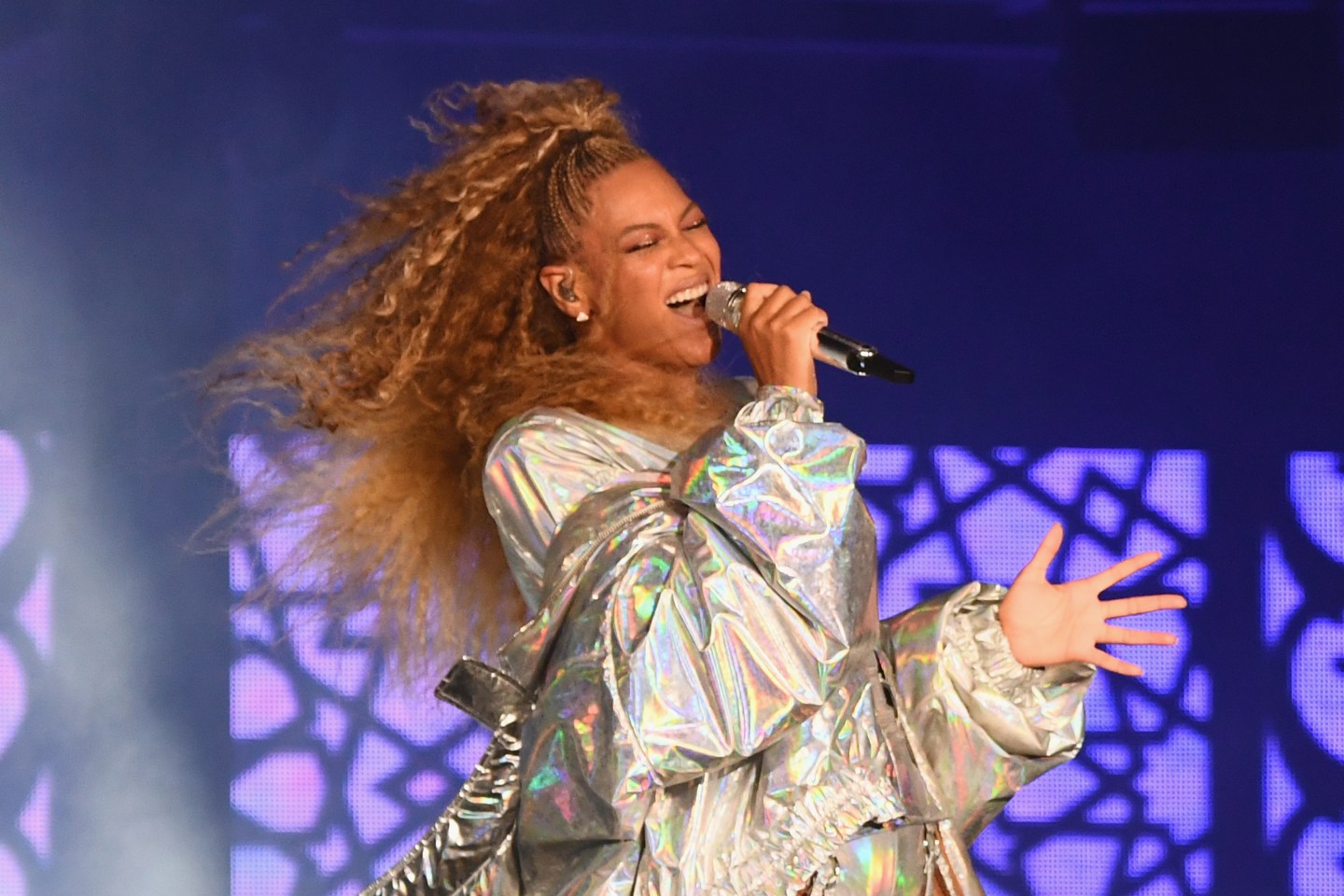 Beyoncé's anthem for the summer "Break My Soul" is more than a rallying cry to get on the dance floor. It's a call for healing and hope during a time that's been marked by COVID, war, and economic precarity.
Larry Busacca—PW1/Getty Images

Beyoncé’s soul may not be broken, but she nearly broke TikTok yesterday when she made her debut on the platform with—in signature Beyoncé style—a love letter to her fans.

The mega-star has been stoking fan excitement in advance of Renaissance, her hotly anticipated first solo studio album since Lemonade in 2016. The full album will be released on July 29.

The first single, “Break My Soul,” which was released with no warning on June 20, has already become an anthem for a modern, troubled age. “With all the isolation and injustice over the past year, I think we are all ready to escape, travel, love, and laugh again,” she told Harper’s Bazaar last year. “I feel a renaissance emerging, and I want to be part of nurturing that escape in any way possible.”

It’s a carefully constructed call to save ourselves by getting on the dance floor.

Larisha Paul, writing in Billboard, breaks it down. “Beyoncé sings the praises of new beginnings through salvation, motivation, and building sturdier foundations. Earlier on the record, she taps into her role as a vessel, as she recounts falling in love and quitting the nine-to-five job that kept her up at night,” a nod to the great resignation that she may or may not have personally experienced. “But communicated within the lyric is an understanding that there’s someone listening somewhere who probably needs to hear these sentiments the most, someone counting down the hours to the next time they can indulge in a night of full-bodied, whole-spirited dancing.”

So, it should be no surprise that Beyoncé’s first-ever TikTok video is a compilation of fans and TikTok creators dancing to the song and interpreting its message of salvation through their bodies and voices. It is a beautiful extended snapshot of joy, resilience, and solidarity—and of course, she remembered to tag the TikTok creators in the comments. (Look for a cameo appearance from Cardi B, too.)

“Seeing y’all release the wiggle made me so happy,” she wrote. “Thank you so much for all the love for BREAK MY SOUL! – Love B.”

I expect, in retrospect, that the spectacle around the upcoming album will form another chapter in Beyoncé’s legacy as an artist, collaborator, marketer, community builder, truth teller, business leader, justice seeker, and an unmatched reader of the cultural room.

One of the truths behind the beat is that escape from the nine-to-five is a privilege few can afford. While sure, some Beyhive members felt Beyoncé had given them a special kind of permission to join a Resignation already in progress, for so many once ignored, then pandemic-essential marginalized workers, abandoning the grind is not an option. If the song holds a mirror to our collective trauma, then the prescription she offers is a reminder that power is a choice. I will do the job, but not be the job. Excuse me, then, while I leave you and the system you create behind, at least for a while.

But as the queen asks us to embrace a freer version of ourselves, even temporarily, it’s also worth thinking about the many people whose names we may never know but who long ago played a part in fighting for a future prepared to welcome Beyoncé in her full power. I stumbled upon one such nearly-erased person whose life and fight for equity in music and beyond has been illuminated in an amazing podcast I recommend below.

I hope you do something good for your soul this weekend.

Jim Thorpe has 1912 Olympic medals restored Thorpe, whose original name was Wa-Tho-Huk, is widely believed to be one of the most talented all-around athletes in modern sport. He won two gold medals in the 1912 Olympic games, only to have them rescinded when his amateur status was later challenged. The controversial decision was particularly upsetting to tribal communities; Thorpe was a member of the Sac and Fox Nation and the first Native American to win an Olympic gold medal. “We are so grateful his nearly 110-year-old injustice has finally been corrected, and there is no confusion about the most remarkable athlete in history," said Nedra Darling, the co-founder of Bright Path Strong, a group that advocated for the decision. Wa-Tho-Huk, which is loosely translated as “bright path,” died in 1953.
ESPN

The nursing association is on a racial reckoning journey. Their first stop is this statement, published last month, acknowledging their historic role in causing racist harm and their plan to remedy that harm moving forward. “Through acts of omission, when we failed to act, and commission, when ANA’s actions negatively impacted nurses of color, we have caused harm and perpetuated systemic racism,” the statement begins. “[W]e must acknowledge that from 1916 until 1964, ANA purposefully, systemically and systematically excluded Black nurses.” We will stay tuned.
Nursing World

The finance world is no longer here for your okey-doke The new Center of Innovation for Diversity, Equity, and Inclusion in Finance has launched, a networking/learning non-profit community with a lofty mission: “To create a culture of capital that embraces diversity and accelerate economic justice, power, and influence for all.” Interested professionals meet every Wednesday to share best practices and beyond; their board of heavyweights includes Cindy Chen Delano, co-founder of Invictus Global Management; Rodney Herenton, founder and co-CEO of Channing Capital; and Kate Murtagh, chief compliance officer, Harvard Management Company. If this is for you, please check it out and report back.
IDiF

The man who made Black music possible, or at least he tried I had never heard of Harry Pace, an extraordinary figure who founded Black Swan Records, the first Black-owned record company, just over 100 years ago. He had deep ties to the Black thought leadership of the day; he was so influential that he launched careers (Ethel Waters), changed the culture (coined the term “rock-and-roll”), and joined forces with W.C. Handy to make the blues an enduring art form. He also plotted to circumvent racist housing covenants in the South Side of Chicago in a bold—and successful —plan that borders on unbelievable. And yet, it is the very story that award-winning playwright Lorraine Hainesbery tells in Raisin In the Sun. Oh, and he basically made Ebony and Jet possible. And…he may have passed for white when it suited him. The story is complicated.

This is part of what makes The Vanishing of Harry Pace, the podcast series from Radiolab, in partnership with Radio Diaries, so compelling. But as the story unfolds, the storytellers raise it to an art form. It starts with Harry’s obviously white grand and great-grandchildren being informed that the ancestor in the sepia-toned photo on the dining room wall whose name they barely knew was, in fact, a very famous Black man—wow, what a family meeting. But in the hands of Kiese Laymon, scholar Imani Perry, screenwriter Cord Jefferson, and WQXR’s Terrance McKnight, the twists and turns of history are expertly interpreted with compassion, nuance, and context. Pace was a figure of enormous influence, a “race man” who worked diligently toward uplift and justice, and whose now invisible fingerprints can be traced to major figures and moments in history.

Did he make Beyoncé possible? Not exactly yes, but not exactly no, either. He understood the power of culture to bring necessary change and the necessity of commercial success to bring justice. I’m happy to know his name, and I promise you will be, too.

“Oh—So now it’s life. Money is life. Once upon a time freedom used to be life—now it’s money. I guess the world really do change . . . No . . . something has changed. You something new, boy. In my time we was worried about not being lynched . . . You ain’t satisfied or proud of nothing we done. I mean that you had a home; that we kept you out of trouble till you was grown; that you don’t have to ride to work on the back of nobody’s streetcar—You my children—but how different we done become.”

— Lena Younger, or "Mama," from Raisin In the Sun