If you were infected with the original Omicron, you don’t have ‘a lot of good protection against BA.4 and BA.5,’ Fauci says 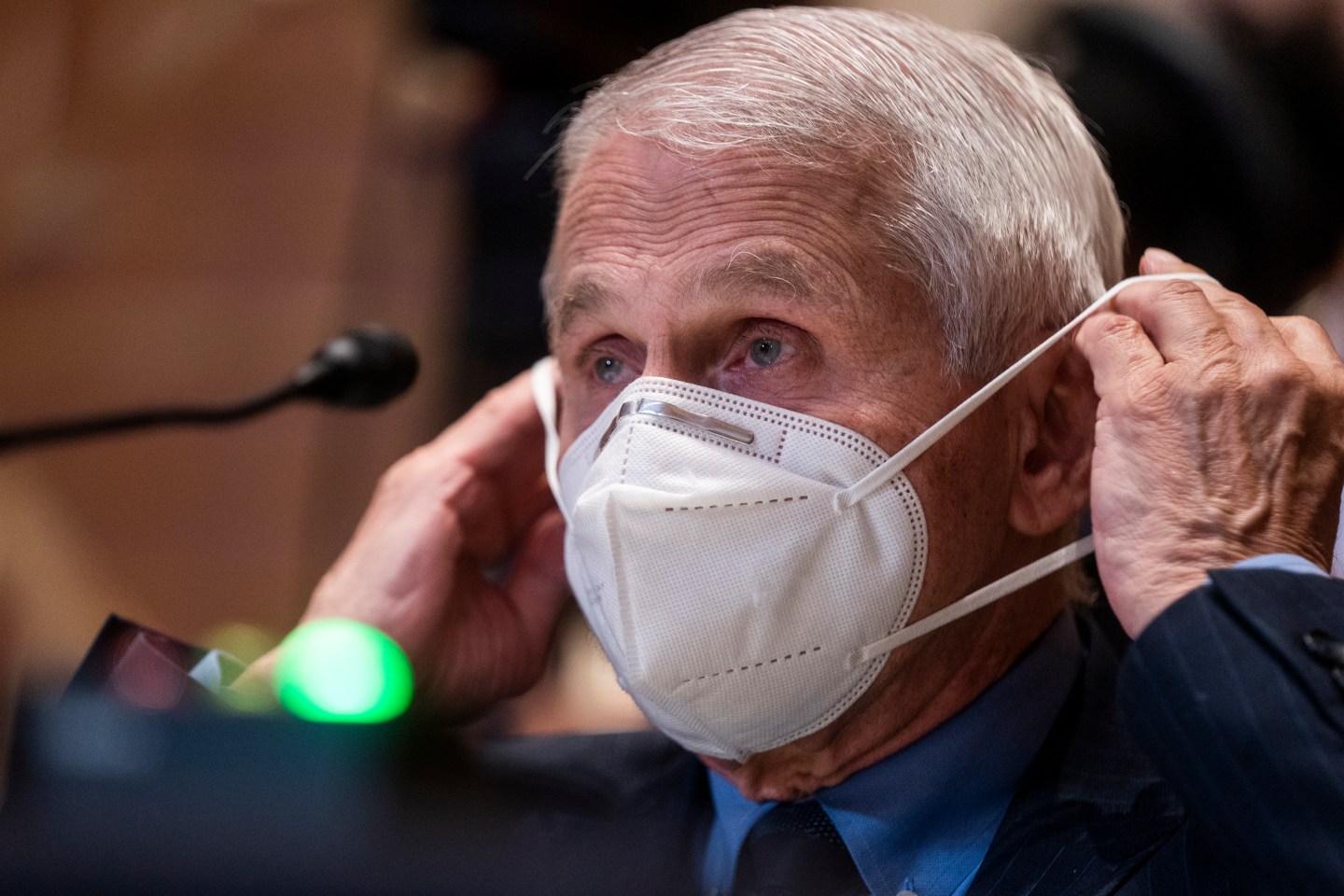 Director of the National Institute of Allergy and Infectious Diseases Dr. Anthony Fauci testifies during the Senate Appropriations Subcommittee on Labor, Health and Human Services, and Education, and Related Agencies hearing to examine proposed budget estimates for fiscal year 2023 for the National Institutes of Health on Capitol Hill on May 17 in Washington, D.C.
Shawn Thew-Pool/Getty Images

Those who were infected with COVID during the first wave of Omicron “really don’t have a lot of good protection” against dominant U.S. subvariants BA.4 and BA.5, Dr. Anthony Fauci, chief medical adviser to the president, said Tuesday.

“It’s very, very clear that immunity wanes, whether that’s immunity following infection or immunity following vaccine,” Fauci said at a White House COVID-19 press briefing. “We have good data now that if you were infected with BA.1, you really don’t have a lot of good protection against BA.4 and BA.5.”

The original strain of Omicron, BA.1, hit the U.S. late last year, eventually overtaking Delta as the dominant strain. No significant new COVID variants have been seen since, with subvariants of Omicron—including so-called “stealth Omicron” BA.2, BA.2.12.1, and currently dominant BA.4 and BA.5—evolving in rapid succession, each more transmissible than the last.

Data out of other countries make the reinfection potential of BA.4 and BA.5 clear, Fauci said, calling on those eligible for vaccinations and booster shots to get them.

Reinfection with BA.4, BA.5 ‘very likely’ for those who had BA.1, experts say

If you’ve had COVID in the past but haven’t had BA.5 or BA.4, coming down with one of the two is possible, if not likely—even if you’ve had another version of Omicron in the past, experts recently told Fortune.

In the early days of the pandemic, reinfections were reported as a rare phenomenon. Now it’s clear they are an inevitable fact of pandemic life—especially with new, more transmissible, increasingly immune-evading variants evolving on the regular.

Fortune reported in May that you can expect to get COVID about once every year, based on modeling projections. At that time, the dominant variants in the U.S. were BA.2 and spin-off BA.2.12.1.

Just two months later, BA.2 has been all but banished by stealth Omicron spinoff BA.5 with help from its close sibling, BA.4. These are thought to be the most transmissible versions of COVID yet, with the ability to evade immunity from both prior infection and vaccination. It’s a whole new ballgame for reinfection, experts say.

Those who had BA.1 were unlikely to get reinfected with BA.2 because they were enough alike, Dr. Amesh Adalja, a senior scholar at the Johns Hopkins Center for Health Security, recently told Fortune.

But someone who had a previous version of Omicron is “very likely” to get reinfected with BA.4 or BA.5, he said.

Western Australia’s chief health officer, Andy Robertson, told news.com.au last week that the region is seeing an increasing number of patients who had BA.2 and are becoming reinfected with what is “almost certainly BA.4 or BA.5” roughly six to eight weeks later.

BA.4 and BA.5—the most transmissible and immune-evasive strains yet—now comprise the vast majority of COVID cases in the U.S., at more than 80%, the White House said Tuesday.

BA.5 in particular “has the potential to cause the numbers of infections to rise in the coming weeks,” the Biden administration said in a statement released Tuesday, encouraging those who are 50 and older, or moderately or severely immunocompromised, to get a second booster shot.

The numbers were released as World Health Organization officials said the BA.5 subvariant is spreading “at a very intense level” globally, comprising an increasing proportion of reported sequences.

At a Tuesday press briefing, WHO Director-General Dr. Tedros Adhanom Ghebreyesus said that the “virus is running freely, and countries aren’t effectively managing the disease burden,” adding that there is a “major disconnect” between the public opinion of the situation and the true gravity of it.

“As the virus pushes us, we must push back,” he said.

Vaccines should continue to offer protection from severe disease and death, officials say

The jury is still out on whether current vaccines hold up against BA.5. But given that vaccines were 15% less effective against Omicron than they were against the Delta variant, even with a booster, “it would not be at all surprising to me to see further decline of protection against hospitalizations and deaths,” Dr. Eric Topol, a professor of molecular medicine at Scripps Research and founder and director of the Scripps Research Translational Institute, recently wrote.

U.S. officials stressed Tuesday that vaccines were still expected to protect against severe disease and death, urging Americans 5 and older to get their first booster shot if they haven’t already, and adults 50 and older and those who are immunocompromised to get their second booster. The Biden administration is reportedly considering the approval of a second booster for all adults.

Getting boosted won’t prevent anyone from getting a variant-specific booster this fall or winter, Dr. Ashish Jha, the White House’s COVID response coordinator, said at the Tuesday press briefing.

Individuals 50 and older with only one booster shot were four times more likely to die this spring than similar individuals who had been boosted twice, CDC Director Dr. Rochelle Walensky said Tuesday.

The rise of a new ‘Deltacron’?

BA.5 takes some of Omicron’s worst traits—transmissibility and immune evasion—to a new level.

But it also combines them with a penchant for affecting the lungs reminiscent of the Delta variant that hit the U.S last summer and fall, according to two recent studies.

In the case of Delta, COVID tended to accumulate in and affect the lungs, potentially resulting in more severe disease. Until recently, a silver lining of Omicron has been its tendency to instead accumulate in the upper respiratory tract, causing symptoms more similar to a cold or the flu.

BA.5 is different, according to a study published June 10 on medRxiv, a Yale– and British Medical Journal–affiliated website that publishes studies not yet certified by peer review. Recent reports show BA.5 shifting back to the lower respiratory tract—at least in animal models—“with a potential increase in disease severity and infection within lung tissue,” researchers from Australia’s Kirby Institute wrote. They referenced another May preprint study that found BA.5 and close relative BA.4 replicate more efficiently in the alveoli of human lungs than so-called stealth Omicron, BA.2.

“BA.5 not only gives the virus greater antibody evasion potential, but concurrently has changed [where it tends to accumulate], along with an increased transmission potential in the community,” the Kirby Institute authors write.

The scenario calls to mind the term Deltacron, which referred to a Delta-Omicron hybrid identified in the U.S. this spring that never took off. Back then, the term was used “prematurely,” Topol wrote in a Sunday blog post on the studies.

Now, for BA.5, the term might be more appropriate, even though the subvariant isn’t a true hybrid.

“The ability to infect cells for BA.5 is more akin to Delta than the previous Omicron family of variants,” Topol wrote.

While BA.4 and BA.5 led to a wave of infections in South Africa this spring, they were relatively mild, with manageable rates of hospitalization. The U.S. and Europe, however, are currently seeing an increase in BA.5 hospitalizations, though well below levels seen in prior waves.

The difference could be due to the fact that South Africa saw a wave of the COVID variant Beta in late 2020 and early 2021 that the West did not, potentially conferring better immunity to Omicron subvariants, Topol wrote.

BA.4 and BA.5—dominant in many countries across the globe—were first detected in the U.S. in late March, as Fortune previously reported, but have quickly taken over the global scene.