A city of 650,000 had zero COVID deaths until Sunday. Omicron’s most transmissible subvariant yet finally overtook its defenses 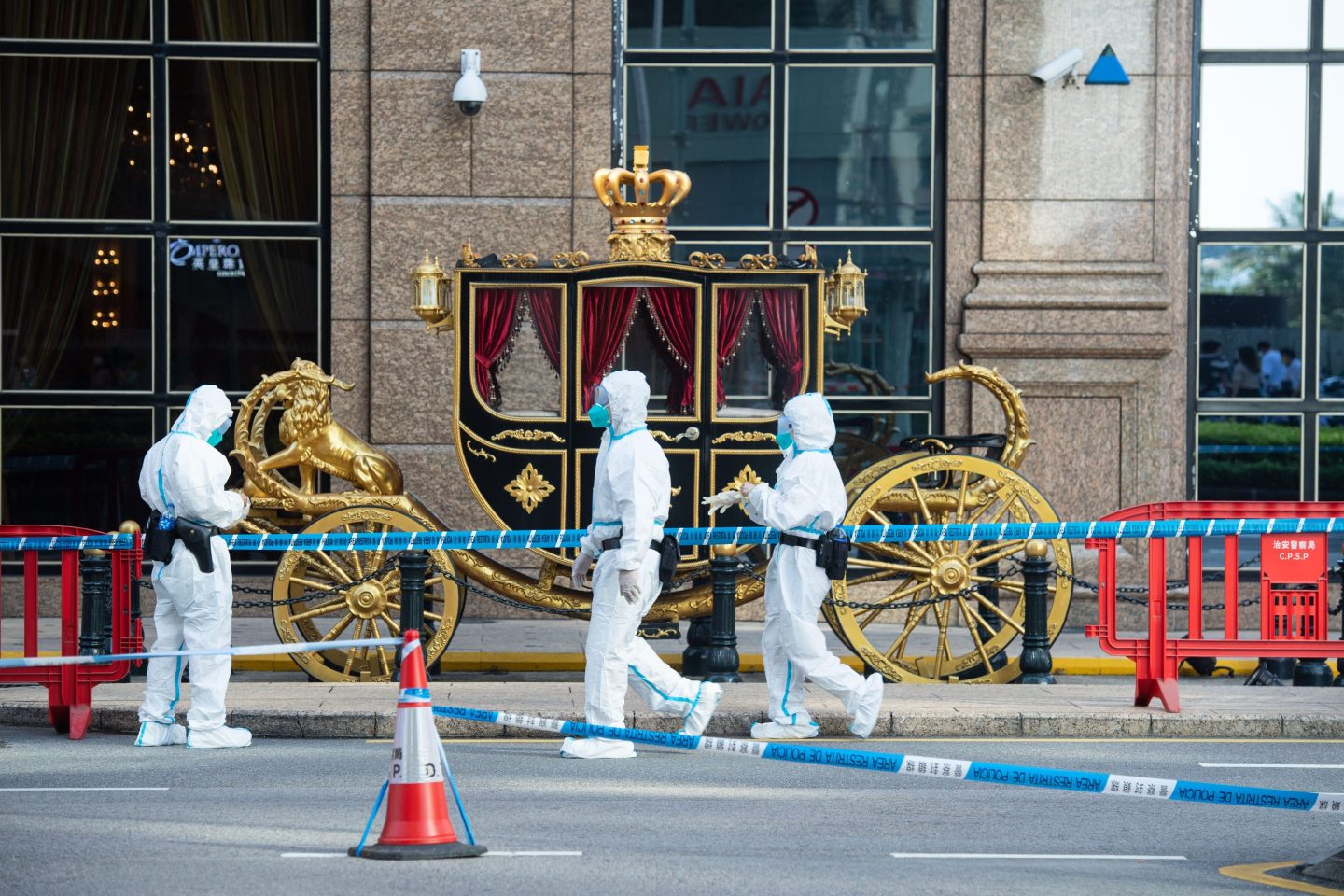 Police officers stand near a carriage outside a casino in Macau on Oct. 4, 2021. The region is experiencing its biggest-ever COVID outbreak.
Cheong Kam Ka/Xinhua via Getty Images

Macau, a semiautonomous region off the coast of southern China known for its casinos, recorded its first-ever deaths from COVID-19 after two elderly people with underlying conditions—a 100-year-old and a 94-year-old—succumbed to the disease on Sunday. The deaths break Macau’s streak of being one of the only cities on earth to not record a death from COVID-19 since the pandemic broke out two and a half years ago and went on to kill 6.3 million people around the world. Globally, 1,500 people are still dying from COVID-19 daily.

Macau health officials say the new Omicron variant BA.5 is driving the current outbreak. BA.5 has rapidly become the dominant strain in the U.S. and elsewhere due to its high degree of transmissibility. Health experts attribute BA.5’s fitness to its ability to evade vaccine defenses and infect people who have previously caught COVID-19.

Macau recorded its first COVID deaths as it faces its largest-ever outbreak of the virus. The gambling hub of 650,000 people has reported 784 cases since June 18. Before then, it had recorded 151 total in total.

Macau kept COVID at bay by sealing itself off from the rest of the world. The territory deploys strict COVID-zero policies and harsh border restrictions similar to mainland China’s. Macau requires that all travelers entering the city undergo a 10-day hotel quarantine (which the city recently reduced from 14 days). Once inside Macau, residents must use a health code app to enter restaurants, casinos, and shopping malls.

Macau authorities are still not sure how the virus entered the city, but the first clusters in June were traced to an employee at a prison and a worker at a meat shop who often commuted between Macau and the nearby city of Zhuhai in mainland China.

The new outbreak has pushed the city to tighten its restrictions. Macau has allowed casinos to stay open but forced schools to end the academic year early. The city has also shut down bars, cinemas, salons, gyms, government buildings, and in-person dining at restaurants.

Macau is the world’s largest gambling hub. Before the pandemic, it took in five times more gaming-related revenue per year than Las Vegas. But Macau’s COVID restrictions have taken a toll on the city’s economy, with casino revenue down 80% this year compared to pre-COVID levels.

From July 4 to July 9, Macau will test every city resident for COVID-19 three times, Macau’s secretary for social affairs and culture, Elsie Ao Ieong, announced on Sunday. After this round of tests, every Macau resident will have been tested for COVID six times since mid-June; the government just completed a different round of three citywide tests last week.

Mainland China also appears to be tightening COVID measures days after it appeared to resume normal life following Shanghai’s months-long lockdown. Over the weekend, China’s government put 1.7 million people in central Anhui province into lockdown after authorities discovered over 1,000 infections in the province. (It is unclear which Omicron subvariant is responsible for the Anhui outbreak.)

For now, it appears there is no end in sight to rounds of lockdowns and mass testing in mainland China, as well as in Hong Kong and Macau, which often follow the central government’s lead.

“Our country has a large population; such strategies as ‘herd immunity’ and ‘lying flat’ would lead to consequences that are unimaginable,” Chinese President Xi Jinping said in Wuhan last week about China’s commitment to its COVID-zero strategy.