Bond-holders look to recession for salvation after vicious half: End of 2022 ‘shouldn’t be as ugly as the front half of the year, but it won’t be pretty’ 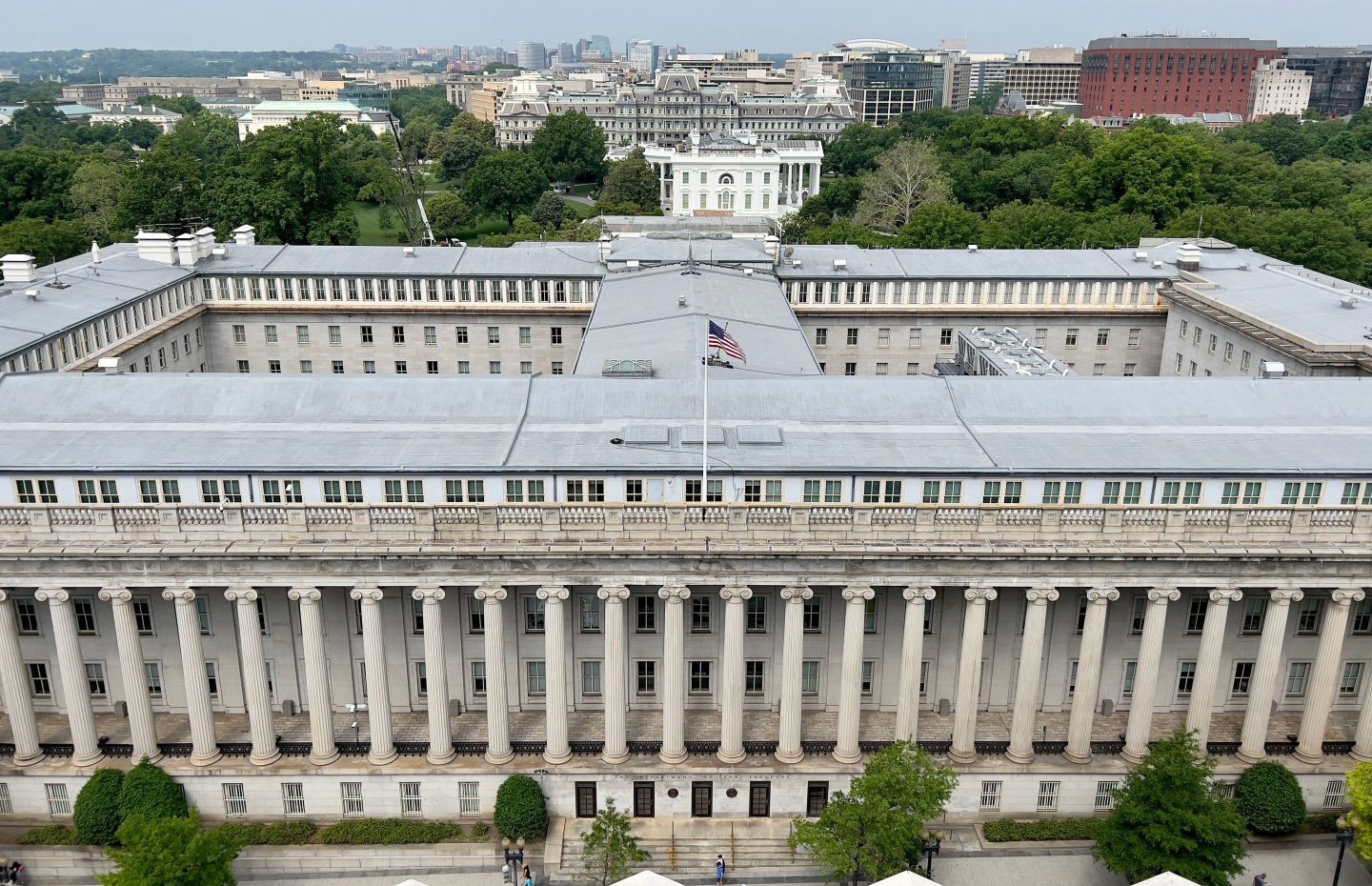 The U.S. Treasury Department building East of the White House, in Washington D.C., pictured on May 20.
Daniel Slim—AFP/Getty Images

Treasury holders reeling from the most brutal first half on record are starting to bet that a worsening economy will deliver some relief from the relentless selloff even as they brace for the risk of more weakness.

With the specter of recession looming bigger by the day, expectations for where U.S. policy rates could ultimately go are being dialed back and some bond buyers are dipping their toes back into investments at these new, higher yields. But inflation is far from defeated and there’s trepidation that the first half rout—which saw close to 14% wiped off global bond portfolios despite stocks also plunging—could be extended even if growth stagnates.

The final six months of 2022 “shouldn’t be as ugly as the front half of the year, but it won’t be pretty,” JPMorgan Chase & Co. rates strategists led by Alex Roever said in a note. In their view, the ongoing battle between inflation and recession risks will result in yields moving up from their current levels while the Treasury curve flattens.

Of course a situation that’s worse than the past six months for bonds is hard for many to envisage simply because it has been so bad already. By one reckoning, the performance of American debt has been worse than at any time since before the US Treasury department was even established during the late 1700s. Based on widely-followed Treasury indexes, meanwhile, investors have endured a first half that’s more painful than any going back to at least the early 1970s.

It’s not just holders of U.S. debt that have been absorbing blows either. The inflationary spiral, caused by the Covid pandemic and exacerbated by the war in Ukraine, has spilled over globally. While the Treasuries index notched a loss of close to 10% from January through June, upward pressure on rates spread everywhere from Germany and Italy to Brazil and New Zealand. Even Japan—long the bastion of ultra-easy monetary policy—is facing pressure to give way to higher yields.

The recession versus inflation dilemma is potentially paralyzing for Treasury-market investors who are struggling to know what strategies to adopt, especially at a time when poor market liquidity is helping to drive outsized moves and jack up volatility.

The earlier stampede toward short-positions in the bond market — those that benefit from higher yields—has been halted and reversed. Yet few are wagering on significantly lower yields either and positioning appears to be fairly balanced. And while derivatives trades that protect against the tail risk of dramatically higher or lower rates are attracting some market participants, overall conviction is low.

“Have we seen peak inflation? I think there’s a very good probability that we have but that’s difficult to predict,” said Janet Rilling, a senior portfolio manager at Allspring Global Investments, which manages $541 billion in assets. “What’s easier is to say that inflation will stay pretty elevated. But even if we just stay elevated the Fed has work to do. In our view, the Fed will continue to be aggressive.”

That expectation for punchy rate increases by the central bank—and concern about how that might hit growth—is evident within the pricing of front-end derivative contracts. Traders are still pricing a 75-basis-point hike as slightly more likely than a move of 50 in July, and they see the benchmark—currently in a 1.25%-to-1.5% range—climbing to around 3.3% by year end.

But pricing beyond that suggests it won’t go too much higher, maxing out around at less than 3.4% in the first quarter, with the Fed then being forced into cutting by more than half a percentage point before 2023 is out. That’s quite a marked shift from just a couple of weeks ago, when the terminal rate was seen above 4% and likely to happen around the middle of 2023.

Market expectations for the pace of consumer-price gains, meanwhile have also come off, with so-called breakeven rates on Treasury inflation protected securities pricing in an average annual rate of around 2.36% for the coming decade.

Erin Browne, a fund manager at Pacific Investment Management Co., is among those who reckon that the economy is “near a tipping point where inflation will break growth.” She says that once inflation “starts to crest” she would look to buy Treasuries in the 2-year to 5-year sector because they will benefit when traders begin to price in more aggressively the kind of rate cuts the Fed could eventually have to implement.

Saira Malik, chief investment officer at Nuveen, says her firm is taking “baby steps” toward increasing bond-market exposure once again. “The Fed needs to see consistent moderation in inflation data points before it can take its foot off the gas with rate hikes. And it’s going to be hard for them to avoid a recession,” she said.

This backdrop leaves the coming holiday-shortened week ripe for more volatility—with certain measures near their highest levels since March 2020—and further bouts of haphazard liquidity. The June employment report and key job openings data will be front and center in the coming week as Powell has stressed in order to ease inflation the central bank needs to cool off the “unsustainably hot” US labor market.

On top of that, there is the potential impact that recession fears will have on riskier assets like stocks, and the flow-on effects to Treasuries. Big moves in the the S&P 500 Index, which has just notched its worst first half since 1970, could be a catalyst for further flows in and out of bonds, particularly now that market participants are past the hurdle of quarter-end rebalancing. And just as importantly, market moves could spill over to the real economy as consumers start to factor in the large changes to wealth that have taken place as both stocks and bonds have gotten hammered.

“The wealth effect from stocks and bonds is massive,” said Gene Tannuzzo, global head of fixed income at Columbia Threadneedle. He reckons that data will start to show both growth and inflation slowing in the third quarter and that while the Fed still needs to follow through on actually implementing its hikes, the “peak in Treasury yields is getting closer.”