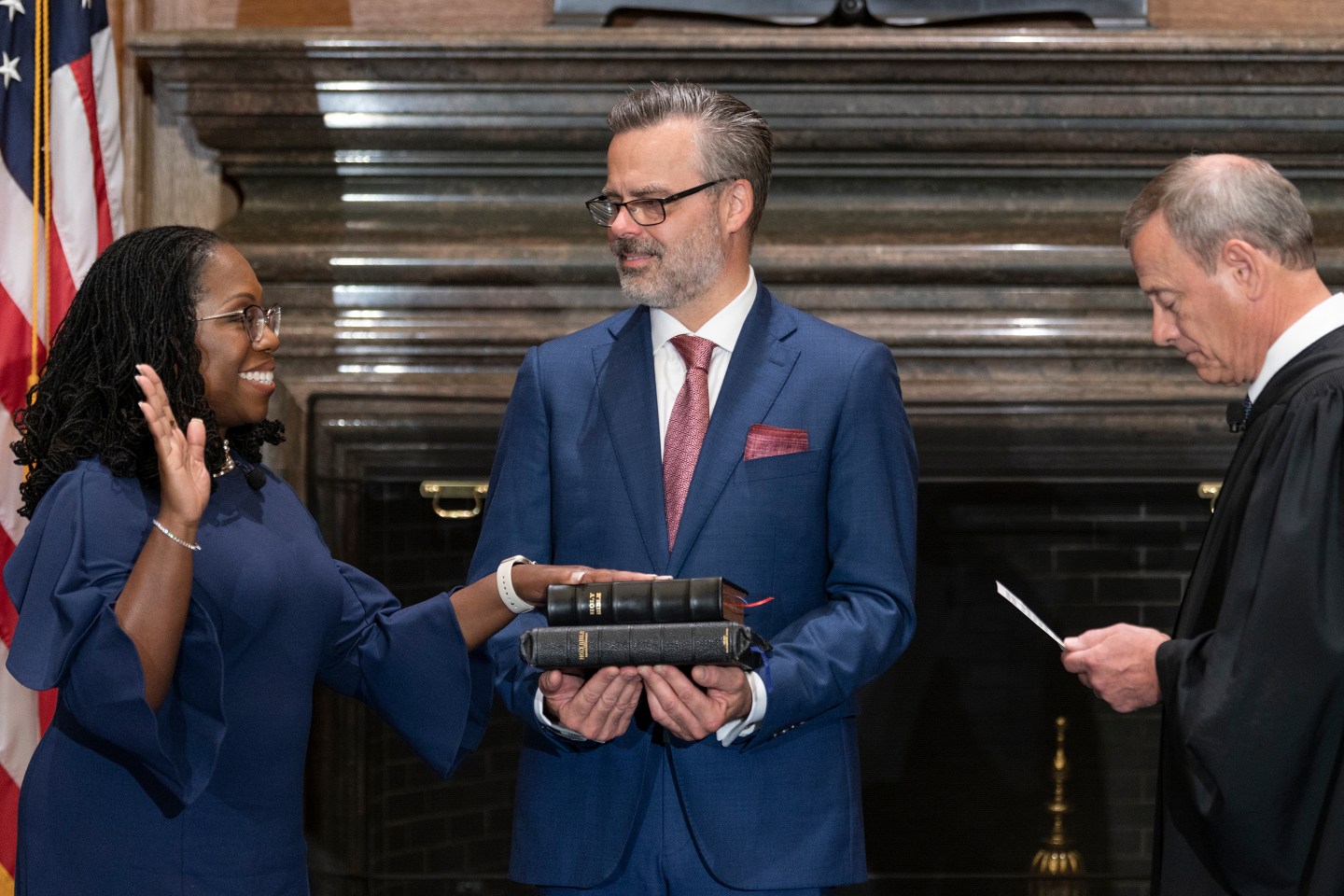 The swearing in took place just minutes after Justice Stephen Breyer retired on Thursday. The ceremony itself was short, lasting just over four minutes. Jackson took a constitutional oath administered by Chief Justice John Roberts and a judicial oath by Justice Breyer.

“I am pleased to welcome Justice Jackson to the court and to our common calling,” Roberts said at the end of the ceremony.

Jackson’s appointment is historic, but her presence doesn’t change the ideological makeup of the court. The appointment of three justices by former President Donald Trump has created a conservative supermajority unseen in the last 75 years. And since Supreme Court appointments are lifelong, it’s unknown how long this majority will last.

This year alone, the conservative makeup has ruled on a number of cases that have upended longtime precedents and reversed laws implemented by past liberal justices and legislators. Many of these rulings are split 6-3 along ideological lines, including the decision on Dobbs last week that effectively overturned Roe v. Wade.  The court also struck down a New York gun law restricting licenses for concealed carry of handguns last Thursday, and ruled yesterday that the 1963 Clean Air Act does not give the Environmental Protection Agency the authority to regulate carbon dioxide emissions from power plants.

In some instances, one conservative judge has joined the liberals’ dissent. On Wednesday, Justice Neil Gorsuch penned the dissent against his fellow conservative justices, lambasting them for their ruling that rolled back tribal sovereignty and granted state authorities jurisdiction over crimes involving non-Native Americans in Native American territory.

There have been some wins for the liberal justices, though. Yesterday, in the court’s final decision for 2022, Justices Roberts and Brett Kavanaugh sided with the liberal justices on Biden v. Texas, allowing the Biden administration to end a Trump-era law forcing asylum seekers traveling to the southern U.S. border to await approval in Mexico.

While Jackson will likely find herself siding with the Court’s liberal justices, statements made at her confirmation hearings this spring suggest her jurisprudence draws from originalism, a judicial philosophy made popular by the late Justice Antonin Scalia, a Reagan-appointed judge. Justices Clarence Thomas and Amy Coney Barrett are also proponents of this ideology.

“I extend my sincerest thanks to all of my new colleagues for their warm and gracious welcome. I am also especially grateful for the time and attention given to me by the Chief Justice and by Justice Breyer,” Jackson said in a statement following the ceremony. Early in her 25-plus year law career, Jackson clerked for Justice Breyer, and considers him one of her most influential mentors. “In the wake of his exemplary service, with the support of my family and friends, and ever mindful of the duty to promote the Rule of Law, I am well-positioned to serve the American people.”

“I am glad for America. Ketanji will interpret the law wisely and fairly, helping that law to work better for the American people, whom it serves,” Breyer said in a seperate post-ceremony statement.

Jackson was confirmed by the Senate in April by a vote of 53-47, with three Republicans joining Democrats. The vote followed a contentious confirmation hearing criticized for Republican senators’ treatment of Jackson. A formal investiture ceremony for Jackson will be held in the fall.

Broadsheet will be taking Monday off in observance of July 4th, but will return in your inboxes on Tuesday.

- Piercing criticism. Wyoming Representative and January 6 committee vice chairwoman Liz Cheney laid into former president Donald Trump in a speech Wednesday night. “We are confronting a domestic threat that we have never faced before—and that is a former president who is attempting to unravel the foundations of our constitutional republic,” she said to a standing ovation at the Ronald Reagan Presidential Library. Cheney criticized fellow Republican leaders for “enabling” Trump’s false claims about the 2020 election, and said they cannot  "be loyal to Donald Trump and loyal to the Constitution.” New York Times

- Scrubs made cool. Figs co-CEOs Heather Hasson and Trina Spear have disrupted the scrubs business by offering fashionable and practical scrubs through a direct-to-consumer model. While Figs has seen a sales slump in recent months—it fell behind its sales goals for the first time, bringing in 100,000 fewer customers than anticipated last quarter—its founders think the company still has plenty of runway. Figs is seeing an increase in repeat customers and has branched beyond scrubs, also selling clothing like sports bras and hoodies. Fortune

- Eyeing payment information. Payment data could serve as the easiest way for criminal investigators in antiabortion states to find out who is getting abortion care. While many card providers don’t keep lists of everything cardholders pay for, prosecutors may try to subpoena relevant information like if a purchase was made at a pharmacy that only sells abortion pills. Banks like New York-based Amalgamated Bank plan to push back on these requests and even notify customers of such subpoenas. New York Times

- Filibuster fight. President Joe Biden said Thursday he would support making an exception to the filibuster in order to codify laws on the right to abortion and privacy. Currently, the Senate lacks the 60 votes needed to approve a law on abortion rights and allowing an exception to this rule would help get the legislation passed. All Democratic senators support codifying abortion rights except Sens. Joe Manchin of West Virginia and Kirsten Sinema of Arizona. CNN

MOVERS AND SHAKERS: Alicia Boler Davis, who left Amazon as its senior vice president of global customer fulfillment last week, is joining Alto Pharmacy as its CEO in September.

- NDA rollbacks. Workplace nondisclosure agreements are pervasive in the U.S., and can prevent workplace harassment victims from coming forward. Congress wants to change that. On Wednesday, House lawmakers introduced the Speak Out Act, which prevents employers from forcing workers to keep quite about instances of work-related sexual assault and harassment. While experts appreciate the legislation, they also note more comprehensive legislation preventing employers from buying employee silence is necessary. 19th*

- Uncovered warrant. On Wednesday, a team researching Emmett Till, a 14-year-old Black boy who was kidnapped and lynched in Mississippi in 1955, uncovered an unserved warrant for the arrest of the woman whose accusations against him led to his death. Carolyn Bryant Donham, the woman who accused him, is still alive and currently in her 80s. She has since recanted part of her allegation that Till grabbed her and made sexually suggestive remarks, but she was never arrested. Family members of Till are now calling for her arrest, though experts say it is unlikely that will happen.  New York Times

- Internal turmoil. Ankiti Bose, co-founder of Singapore-based global fashion supply chain platform Zilingo, has stepped down from her board position, saying the board was opaque when disclosing allegations of misconduct against her. Bose was removed from her role as CEO in May following claims of financial irregularities, and the board has been weighing options for liquidation and management buyout as the startup falls deeper into crisis. The company was once valued at $970 million in 2019. Bloomberg

I am a trans man. I had an abortion. Reproductive rights is everyone's fight. Esquire

Workers are coming back, and coming out, at the office Wall Street Journal

Seeking an abortion? Here’s how to avoid leaving a digital trail Washington Post

“I grew up in a small town in the Deep South looking the way I do. I was different than everybody else… What [Sheryl Sandberg] was saying was… 'You're actually part of the team as opposed to being the outsider.’ It took me a long time to internalize that the fight that got me to where I was successful also was holding me back.”

-Ancestry.com CEO Deborah Liu on her former Facebook colleague Sheryl Sandberg telling her “‘you can stop fighting now. You've won," and how it has informed her management style.