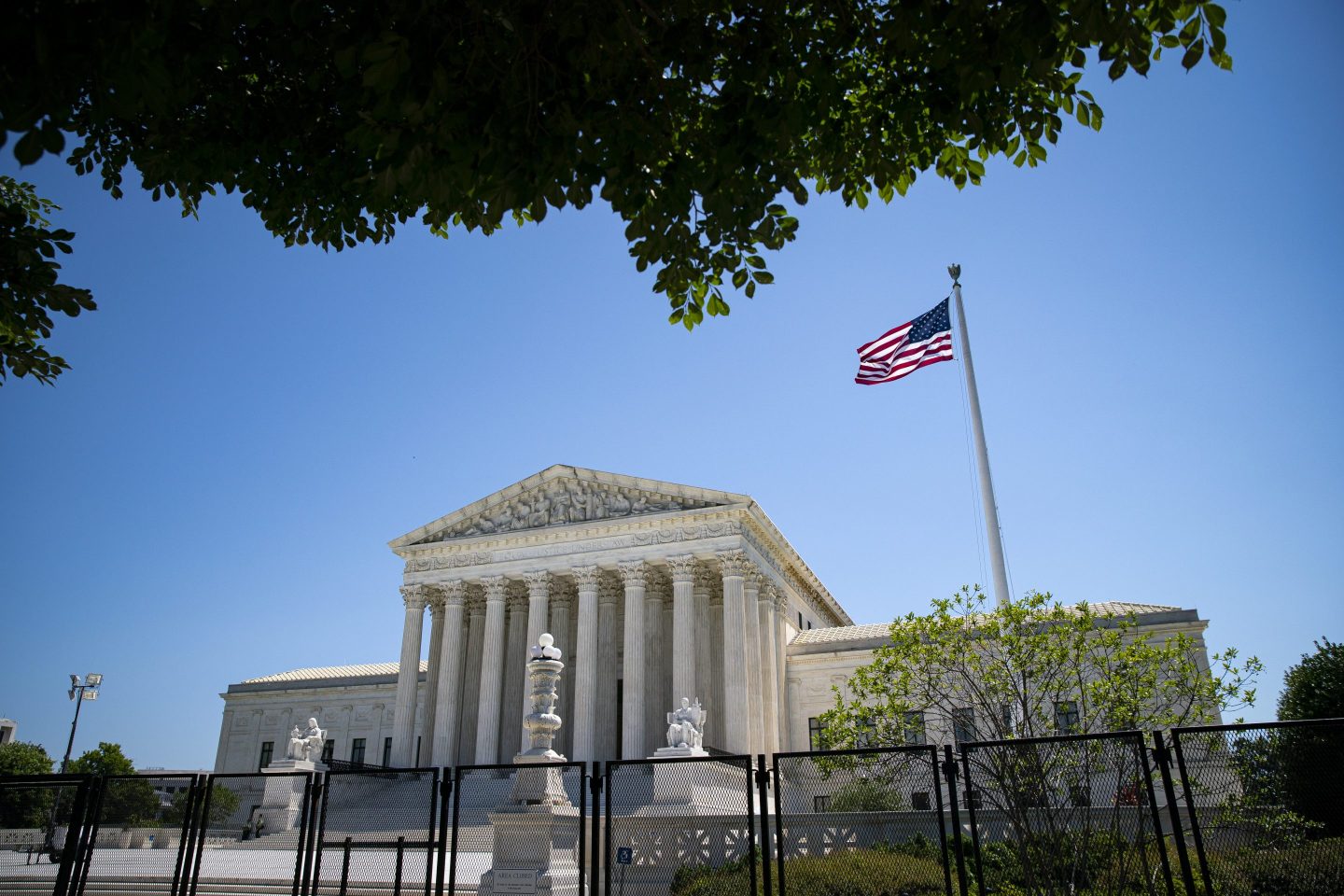 The court will hear an appeal by North Carolina Republicans seeking to reinstate a voting map they drew in the General Assembly to lock in probable victories in 10 of the state’s 14 districts.
Al Drago—Bloomberg/Getty Images

The U.S. Supreme Court agreed to use a North Carolina redistricting case to consider adopting a far-reaching legal doctrine that would shift more federal election power to the state legislatures that are now disproportionately controlled by Republicans.

The court said it will hear an appeal by North Carolina Republicans seeking to reinstate a voting map they drew in the General Assembly to lock in probable victories in 10 of the state’s 14 districts. State courts imposed a different map, saying the GOP’s lines were so partisan they violated the state constitution.

The appeal asks the justices to embrace what scholars call the “independent state legislature” theory, which contends the U.S. Constitution gives state lawmakers near-exclusive authority to set federal election rules. Republicans have been pushing the theory for decades, invoking it during the 2000 presidential election battle and in fights over the counting of mail ballots in 2020.

If adopted, the doctrine could bar state judges from striking down legislatively enacted congressional maps and voting laws and empower the U.S. Supreme Court to decide when those state courts have gone too far. It could cast doubt on the use of independent redistricting commissions.

The theory focuses on the Constitution’s elections clause, which says the rules for congressional races “shall be prescribed in each State by the Legislature thereof.” A similar provision governs the appointment of presidential electors.

Three conservative justices—Samuel Alito, Clarence Thomas and Neil Gorsuch—suggested in March they agreed with those arguments. The clause’s language “specifies a particular organ of a state government, and we must take that language seriously,” Alito wrote for the group.

The court will hear arguments and rule in the nine-month term that starts in October.

The General Assembly’s map is being challenged by voters and self-described pro-democracy groups. They urged the Supreme Court not to hear the case, saying the GOP arguments would fundamentally alter the balance of state and federal power and nullify potentially dozens of state constitutional provisions across the country.

“The U.S. Constitution does not grant impunity to a state legislature for violations of its state constitution simply because the legislation relates to congressional elections,” argued one of the groups, Common Cause.

The North Carolina Supreme Court said in February that the General Assembly-drawn map violated several provisions of the state constitution. The legislature then approved a new map, but a three-judge panel concluded it was unconstitutional as well. The panel imposed its own lines for the 2022 election.

The court-ordered map is more in line with the state’s politically divided nature, with seven likely Republican districts, five likely Democratic districts and two competitive seats. States must redraw their districts after the US Census every 10 years.

In its March decision, the U.S. Supreme Court refused to restore the Republican-drawn map for the 2022 election. Justice Brett Kavanaugh cast a pivotal vote, saying it was too close to the balloting to force North Carolina to change its districts again, but adding that the court should eventually take up the issue.

In his opinion, Alito faulted the state court for relying on provisions of its constitution that don’t explicitly refer to partisan gerrymandering.

Adoption of the doctrine would threaten a 2015 Supreme Court decision that permitted independent redistricting commissions. A 5-4 court in that case rejected Republican arguments that an Arizona commission, approved by voters in a ballot initiative, violated the elections clause.

The court’s conservatives invoked the independent state legislature theory during the litigation surrounding the 2020 presidential election when they criticized decisions by both state and federal judges to extend deadlines for the receipt of mail ballots.

In the 2000 Bush v. Gore decision, three conservative justices said the Florida Supreme Court usurped the power of state lawmakers when it ordered ballot recounts that might have swung the presidential election to Democrat Al Gore. The court as a whole didn’t adopt that approach, instead relying on a different constitutional provision to rule for Republican George W. Bush and seal his election.

The Supreme Court ruled in 2019 that federal judges can’t throw out maps for being too partisan. The majority downplayed the impact of its decision in part by pointing to the possibility that state courts could invoke their own constitutions to invalidate partisan gerrymanders. The court has grown more conservative since then, with Justice Amy Coney Barrett replacing the late Justice Ruth Bader Ginsburg.