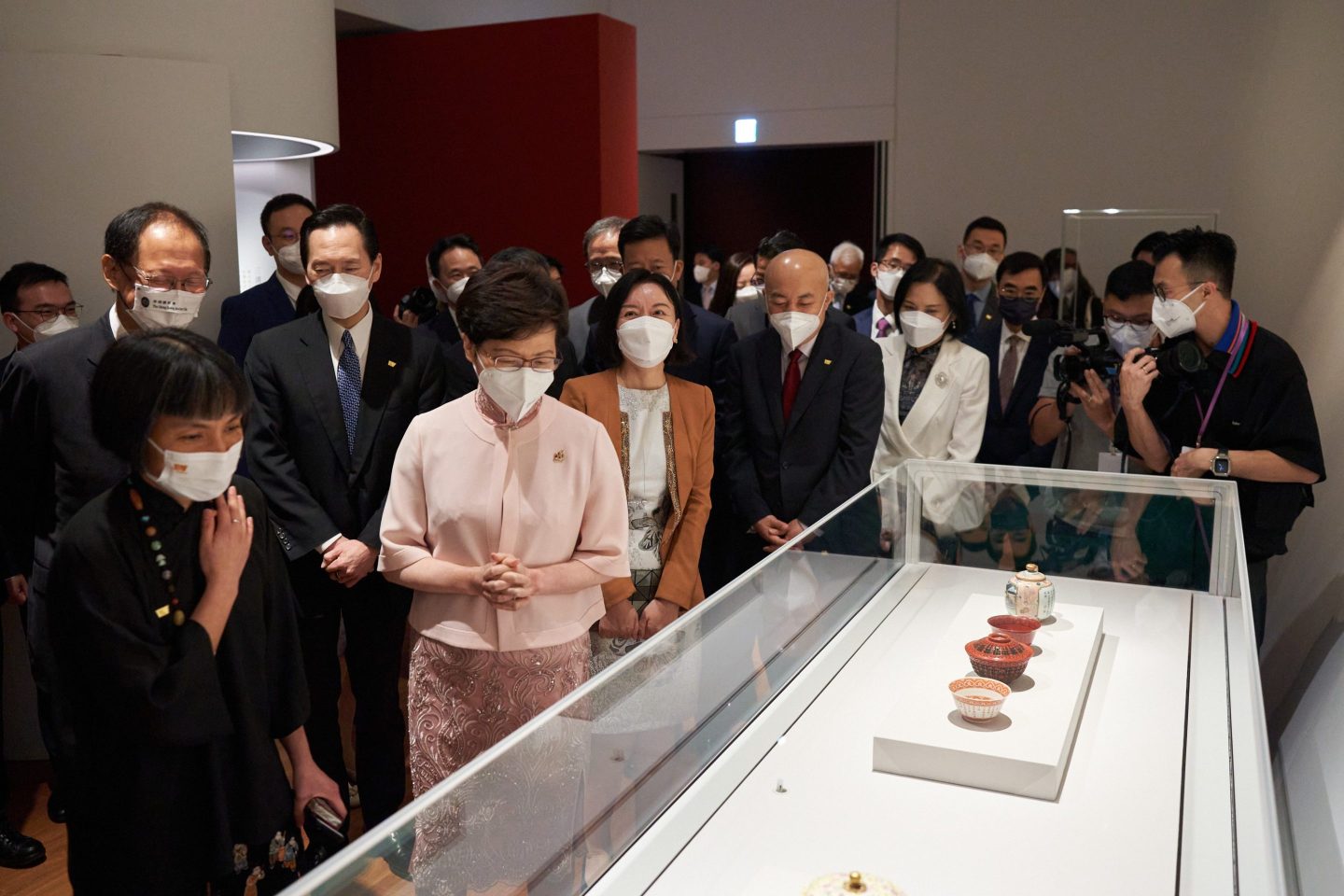 China President Xi Jinping made his first trip outside of mainland China since the pandemic began on Thursday, traveling across the semiclosed border between Shenzhen and Hong Kong to commemorate 25 years since the former British colony returned to Chinese sovereignty.

When the president last visited Hong Kong, five years ago, one of the few stops on his tour was the West Kowloon Cultural District, a nascent arts center built within a park on the water’s edge, that served as the proving ground for the Special Administrative Region’s outgoing chief executive, Carrie Lam.

Lam served as the chairman of the board overseeing the development of the cultural district from 2012 to 2017, when she was elected chief executive of the city. But her bid for chief executive was briefly derailed over her decision in 2016 to designate the West Kowloon Cultural District home to the Hong Kong Palace Museum (HKPM), a cultural project whose exhibits borrow items from Beijing’s museum of the same name.

At the time, critics denounced the unilateral nature of Lam’s decision, accusing her of bypassing local legislature and forcing through plans for the museum under direct order from Beijing, and pro-democracy advocates depicted the museum as a symbol of the central government’s growing influence over Hong Kong’s local affairs. Five years later, as Xi returns to mark the end of Lam’s term in office, those early criticisms that Beijing had grown increasingly assertive of its authority in Hong Kong have proven prophetic.

The Hong Kong Palace Museum is one of several new centers built in West Kowloon.

Hong Kong’s $450 million Palace Museum was designed by Rocco Design Architects, a local firm, and is built roughly in the shape of a ding—a traditional Chinese cauldron. Rising five stories high and slanting outward as it climbs, the golden structure houses nine gallery spaces displaying 914 artifacts on loan from the Palace Museum in Beijing, otherwise known as the Forbidden City.

According to the HKPM, its collection is “the largest and finest the Palace Museum has ever lent to another cultural institution since its establishment in 1925.”

The museum, now complete and set to open to the public on Saturday, was financed by the Hong Kong Jockey Club—Hong Kong’s largest taxpayer and one of its largest charities, which also holds a monopoly on gambling licenses in the city. The government will foot the bill for half of the venue’s operating expenses; ticket sales will cover the rest. The museum can welcome 5,000 visitors per day and, as of last week, had already sold 70,000 at a price of roughly $6.

On Wednesday, during a VIP preview of the museum, the Hong Kong Palace Museum deputy director Brian Yuen said he didn’t know whether Xi would visit the landmark project during his trip to Hong Kong.

“The government hasn’t told us yet,” Yuen said, although the museum appears to have rushed to open in time for Xi’s visit. One large blank wall awaits delivery of a tapestry from the Louvre, which is co-curating one of the exhibitions at the HKPM. A few empty display cases line a gallery space otherwise decked with intricate carvings and luxurious lacquer works.

The governments—both local and national—have kept details of Xi’s trip closely guarded. Hong Kong police only confirmed Xi was coming at all on Tuesday, arriving by train from China’s southern city of Shenzhen on Thursday, and leaving again the same day, only to return to Hong Kong once more on Friday July 1, the actual anniversary date of Hong Kong’s handover.

The high-speed rail line between Hong Kong and Shenzhen that will transport Xi back and forth was another controversial project opposed by activists, who denounced the $10.8 billion rail link as a waste of public funds and a marker of the city’s creeping integration with mainland China. Opponents said the same thing of the $18.8 billion Hong Kong-Zhuhai-Macau bridge that Xi personally opened in 2018, providing a 34-mile road route connecting the three cities.

The Hong Kong Palace Museum was initially controversial because of how Lam pursued its development, bypassing the local legislature and allegedly signing a cooperation agreement with the museum in Beijing and appointing Rocco as the site’s architect before gaining legislative approval in Hong Kong.

Opponents accused Lam of violating rules that require proposed developments in the Cultural District to go through a period of public consultation. Hong Kong’s Independent Commission Against Corruption (ICAC) opened an investigation into the incident in March 2017, at the request of lawmaker Claudia Mo, but dropped the case that June, days before Lam’s inauguration.

“Of course, some will say what a coincidence in timing this is—it seems—like a celebration for Lam who is ready to take office. But personally, I choose to believe in the ICAC,” Mo said at the time.

The rail link, the bridge, and the Palace Museum are all part of Xi Jinping’s vision for Hong Kong’s future as one node along an integrated economic region dubbed the Greater Bay Area—a constellation of 11 cities that collectively produce $1.5 trillion in GDP each year, or roughly the same economic output as all of South Korea.

“[The Hong Kong and Beijing] museums will work closely together to integrate into the development of the Greater Bay Area and draw on Hong Kong’s position as an international arts and cultural exchange hub to broaden the international influence of Chinese culture,” Wang Xudong, director of the Palace Museum in Beijing, said during the official opening of the Hong Kong Palace Museum last Saturday.

Critics who see the museum as a symbol of mainland China’s creeping assimilation of Hong Kong are, therefore, not entirely wrong. The concept of the Greater Bay Area expressly calls for China’s two Special Administrative Regions of Hong Kong and Macau (both former colonies that currently enjoy a level of administrative independence from the national government in Beijing) to integrate with mainland China’s Guangdong province.

The central government has tasked Hong Kong with serving as the financial hub for the economic zone. Developments at the West Kowloon Cultural Center—where Hong Kong also opened the M+ contemporary Asia arts gallery last November—show that officials are angling to position Hong Kong as the Bay Area’s leading cultural hub as well.

But opponents in Hong Kong say the Hong Kong Palace Museum is also a propaganda tool, designed to counter the localist streak inherent to Hong Kong identity and instill Hong Kongers with a sense of Chinese national pride.

When Hong Kong returned to Chinese sovereignty in 1997, the national government agreed the city could maintain its judicial and legislative autonomy under a framework called One Country, Two Systems. But since 2014, when pro-democracy demonstrators occupied large areas of Hong Kong for several months, the national government has placed greater emphasis on enforcing the “One Country” aspect of its cross-border relationship.

In 2016, the Hong Kong government disqualified several elected lawmakers because they refused to comply with a new rule from Beijing that required all lawmakers to “solemnly” pledge an oath of allegiance to the People’s Republic of China when taking office.

In 2020, following months of antigovernment protests in Hong Kong, the government in Beijing bypassed Hong Kong’s legislative autonomy and imposed a National Security Law in the city, criminalizing acts of treason, secession, sedition, and subversion against the central government. Dozens of pro-democracy politicians and advocates have been arrested under the law, including Mo, who urged the ICAC to investigate Lam over the Hong Kong Palace Museum in 2017.

Last year, Beijing lawmakers also revised the rules on elections in Hong Kong, redesigning the election process so that “patriots only” can run the city. Lam is ending her five-year reign as chief executive on Thursday, leaving former police chief John Lee as her successor, after he won a local election in May.

Lee ran unopposed and secured victory with just 0.02% of the population eligible to vote under the new rules. Xi is due to attend Lee’s swearing-in ceremony on July 1, where analysts will pick over details in the president’s speech for indications of how Beijing expects Hong Kong to develop over the next five years.

“On the one hand, Beijing wants to incorporate Hong Kong into the Greater Bay Area development plan,” Vivan Zhan, an associate professor specializing in Chinese politics at the Chinese University of Hong Kong told Bloomberg. “But at the same time, it needs to allow Hong Kong to maintain a certain degree of autonomy to strengthen its credibility for an international audience.”