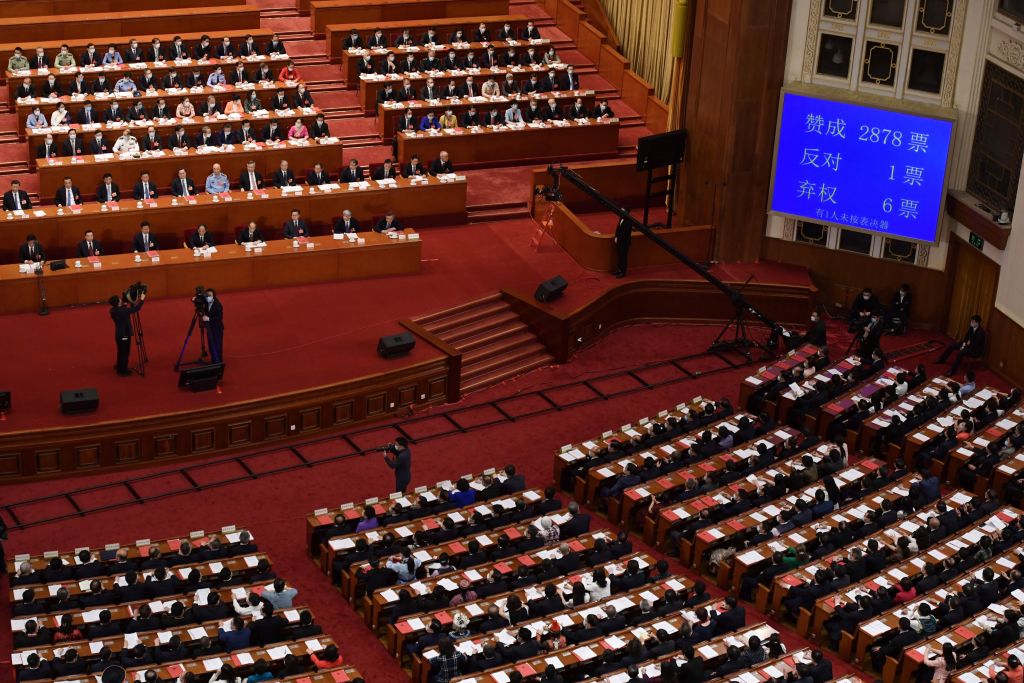 A screen shows the result of the vote on a proposal to draft a security law on Hong Kong during the closing session of the National People's Congress at the Great Hall of the People in Beijing on May 28, 2020. - China's rubber-stamp parliament endorsed plans May 28 to impose a national security law on Hong Kong that critics say will destroy the city's autonomy. (Photo by NICOLAS ASFOURI / AFP) (Photo by NICOLAS ASFOURI/AFP via Getty Images)
NICOLAS ASFOURI/AFP via Getty Images

The National People’s Congress (NPC), China’s top political organ, voted to move forward with the law on the last day of its annual meeting in Beijing. Lawmakers in China will draft the legislation in the coming months, and it’s expected to take effect by September.

The law bans sedition, secession, and subversion of China’s central government. Critics say it threatens civil liberties in Hong Kong and undermines the “one country, two systems” arrangement that separates the region’s political, legal, and financial infrastructure from mainland China’s.

The U.S. government has already signaled it will oppose the passage of the law, which U.S. Secretary of State Mike Pompeo on May 22 called a “death knell” for Hong Kong’s autonomy.

A U.S. response to the NPC vote could jeopardize Hong Kong’s special trade status and standing as an international financial and business hub.

On Wednesday, Pompeo said the State Department no longer considers Hong Kong autonomous from the Chinese government. Pompeo certified the designation to Congress, as is required by the 1992 Hong Kong Policy Act.

Pompeo’s remarks do not trigger any part of HKHRDA, but they pave the way for harsher U.S. action against Beijing. The HKHRDA allows the U.S. to sanction Chinese officials and gives it the option to rescind Hong Kong’s status as a separate trade and customs territory from mainland China.

If the U.S. chooses to revoke Hong Kong’s special status, the city would be subject to all the same tariffs and export restrictions that the U.S. places on China. Some experts worry that the political uncertainty could discourage foreign investment in Hong Kong and prompt multinationals to scale back their presence there, or relocate to places like Singapore or Tokyo.

President Trump said on Tuesday that the U.S. would announce its response to the national security law by the end of the week. Trump said the response would be “very interesting” but did not specify what it would entail.

The U.S. Chamber of Commerce said in a Tuesday statement that it was “deeply concerned” that the national security law would undermine the “one country, two systems” framework that separates Hong Kong’s legal, financial, and political systems from mainland China’s. The chamber also expressed concern that altering Hong Kong’s special trade status would have “serious implications for Hong Kong and for U.S. business.”

“It would be a serious mistake on many levels to jeopardize Hong Kong’s special status, which is fundamental to its role as an attractive investment destination and international financial hub,” the statement read.

A Hong Kong government spokesperson on Wednesday called the U.S. chamber’s statement “unhelpful” and said, “All the rights and freedoms enjoyed by Hong Kong people and international investors will remain unchanged.”

What’s next for Hong Kong?

Article 23 of the Basic Law, Hong Kong’s mini-constitution, states that the Hong Kong government should introduce its own version of a national security law forbidding secession, sedition, and subversion against the central government.

In 2003, Hong Kong’s government was forced to withdraw a bill that would have enacted the article after hundreds of thousands of demonstrators in Hong Kong took to the streets to oppose the legislation.

Beijing is bypassing Hong Kong’s legislature with the new law. Thursday’s vote authorizes the NPC Standing Committee to draft the new law on its own. Once it’s written, the Hong Kong government is required to enact the law immediately.

Anti-government protests in Hong Kong, which entered a lull during the coronavirus outbreak after engulfing the city for much of 2019, restarted last week after Beijing announced the national security legislation.

On Wednesday, police fired pepper balls and arrested over 360 people during another protest against a proposed national anthem bill.

—Inside China’s reopening: 7 personal stories of life after lockdown
—Photo essay: What life looks like in Europe as the continent starts to reopen
—Reopening of Shanghai Disneyland is a proving ground for pandemic-era theme parks
—Trump’s demand that China pay coronavirus reparations evokes an ugly history
—PODCAST: How Marc Benioff is helping out during the coronavirus pandemic
—WATCH: The global crisis in recycling