Amazon staff demand ban of books calling transgender people mentally ill: ‘If we bill ourselves as the world’s biggest bookstore, that comes with a lot of responsibility’ 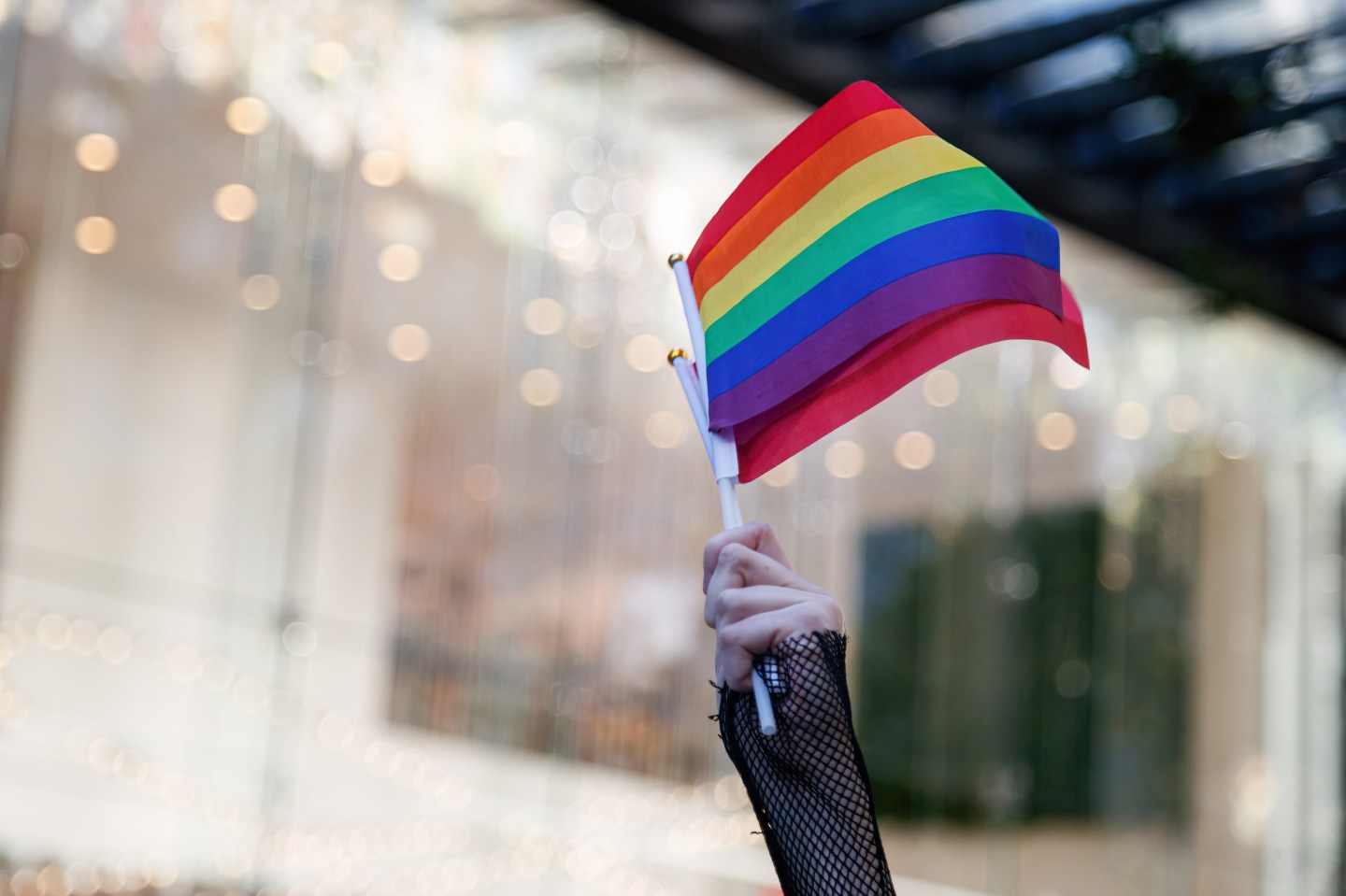 A protester waves the LGBT flag during the demonstration. Equal Love Brisbane organized a rally in Brisbane's King George Square for LGBT rights and called for an end to discrimination before marching through the central business district. Speakers identified questions surrounding the recent Fédération Internationale De Natation (FINA) decision to ban transgender athletes from competing on a professional international level and the much-discussed Australian Religious Discrimination Bill which if brought forward would give religious organizations the authority to fire or discriminate against employees or students depending on their sexuality /or gender.
Joshua Prieto/SOPA Images/LightRocket via Getty Images

A group of Amazon.com Inc. employees plans to march in Seattle’s Pride Parade on Sunday to protest the online retailer’s sale of books they consider anti-transgender—an action that threatens to erode the company’s image as an inclusive employer.

In recent months, several hundred staffers have been pushing the e-commerce giant to ban books like “Irreversible Damage: The Transgender Craze Seducing Our Daughters.” They say such titles dehumanize trans people and dismiss their identities as mental disorders, which runs counter to the recommendations of almost every major medical group. Employees say the books could confuse vulnerable teens and their parents who turn to Amazon seeking information.

“It’s pretty jarring to see books that are promoting that trans people should not transition in the LGBT book section,” said Lina Jodoin, who transitioned two years ago and quit her engineering job at Amazon last month in protest. “It just hurts on a personal level.”

The internal backlash began more than a year ago via employee chat rooms, then spilled into public in March when more than 400 workers signed a petition demanding that senior management stop selling certain books and convene a panel to determine whether the titles violate Amazon’s policies against hate speech. The activism ratcheted up earlier this month when about 30workers belonging to a group called No Hate at Amazon participated in a “die-in” during a Pride celebration at Amazon’s Seattle headquarters.

To date more than 600 employees have signed the petition and about 20 workers have quit the company due to the sale of titles they say misrepresent what it means to be transgender, according to a member of the group. Several other transgender employees are also planning to quit after they complete certain gender-affirming treatments, a complex and personal processthat can take years and could be disrupted by switching jobs and insurance plans, said the person, who requested anonymity for fear of retaliation.

The planned demonstration during the Seattle Pride Parade, which is expected to attract as many as 500,000 observers, will be No Hate at Amazon’s most visible protest to date. Three months ago, Seattle Pride organizers also dropped Amazon as a corporate sponsor, citing its support of lawmakers and organizations that support anti-LGBTQ legislation.

“We respect that many people care deeply about this topic, and we remain committed to providing an inclusive work environment for all of our 1.6 million employees,” Amazon spokesperson Maggie Sivon said in an emailed statement. “As a company, we believe strongly in diversity, equity, and inclusion. As a bookseller, we’ve chosen to offer a very broad range of viewpoints, including books that conflict with our company’s stated positions. We believe that it’s possible to do both—to offer a broad range of viewpoints in our bookstore, and to stand behind our values as a company. When reviewing a book against our content guidelines, we consider the specific content of that book and we invest significant time and resources to ensure our guidelines are applied as consistently as possible.”

Deciding what items to ban is a constant challenge for Amazon, which typically declines to yank products until public pressure threatens to dent its reputation. In 2015, the company pulled Confederate flag merchandise from its web store but only after Walmart Inc. and EBay Inc. banned them first. Amazon is frequently called out for selling Nazi memorabilia and other merchandise deemed anti-Semitic, such as Christmas ornaments celebrating Auschwitz, the infamous Nazi death camp. More than half the goods sold on Amazon come from independent merchants, who post their own merchandise on the site through online portals, making the sprawling online marketplace difficult to police.

For example, Amazon last year stopped selling the book “When Harry Became Sally,” saying it dismissed transgender people as having mental disorders. But a Bloomberg reporter found the book on the web store this week while reporting this story. It was removed after the reporter asked Amazon about it.

Employees are struggling to understand why Amazon banned that book but continues to carry other titles with similar themes. They suspect a backlash from Republican lawmakers may have given the company pause. Senator Marco Rubio of Florida, for one, accused Amazon of censorship after it stopped selling “When Harry Became Sally.”

Of particular concern to the employee activists is “Irreversible Damage,” which appears at the top of search results when an Amazon shopper types in “transgender.” Written by Abgail Shrier, the 2020 book uses anecdotal evidence to suggest that teens identifying as trans is a passing “trend” that can be traced back to mental health issues. It has a 4.7-star rating and more than 6,000 Amazon reviews.

Shrier and Regnery Publishing didn’t respond to requests for comment. On its website, the publisher said “Abigail Shrier’s essential book will help you understand what the trans craze is and how you can inoculate your child against it—or how to retrieve her from this dangerous path.”

Another target is “Johnny the Walrus,” a children’s book by conservative commentator Matt Walsh about a boy who thinks he’s a marine mammal. The boy’s mother, caving to pressure from “the internet people,” feeds him worms and takes him to a saw-wielding doctor who suggests turning his hands and feet into fins.

A spokesperson for the title’s publisher, the Daily Wire-owned DW Books, applauded Amazon for “dismissing demands by its woke employees,” adding that “with nearly 100,000 copies sold on Amazon alone, it’s clear there is a huge demand for “Johnny the Walrus” by Amazon customers, and we are thrilled with the book’s massive success.”

Some Amazon employees express frustration that their employer is willing to take a position on some issues—supporting the Black Lives Matter movement, say, or providing relief to Ukrainians fending off the Russian invasion—but is unwilling to ban all books they consider anti-transgender.

GLAAD, a LGBTQ media watchdog group, says the company has failed to honor the pledge it made last year not to sell books misrepresenting LGBTQ people as mentally ill. “Amazon should keep that promise, adhere to its own content guidelines that forbid hate speech and stop misrepresenting these titles as anything other than what they are: harmful anti-LGBTQ misinformation and propaganda,” a spokesperson for the advocacy group said.

Jodoin, who knew she was transgender when she was 18, is particularly concerned that parents reading books like “Irreversible Damage” could deny their children’s transgender identity, with potentially devastating consequences. Transgender and nonbinary teens were more likely than their cisgender peers to consider or attempt suicide in the past year, according to a survey of LGBTQ youth conducted by the mental-health advocacy group The Trevor Project. Respondents who were threatened with or subjected to harmful and discredited practices known as conversion therapy were also more likely to report suicidal ideation than those who had not. At least 20 states have banned the use of conversion therapy on children.

“It’s especially dangerous when it’s this marketplace as big as Amazon,” Jodoin said. “If we bill ourselves as the world’s biggest bookstore, that comes with a lot of responsibility.”