March of Dimes’ CEO is using crypto to address maternal health care deserts: ‘We have a new focus on donations made by cryptocurrency’ 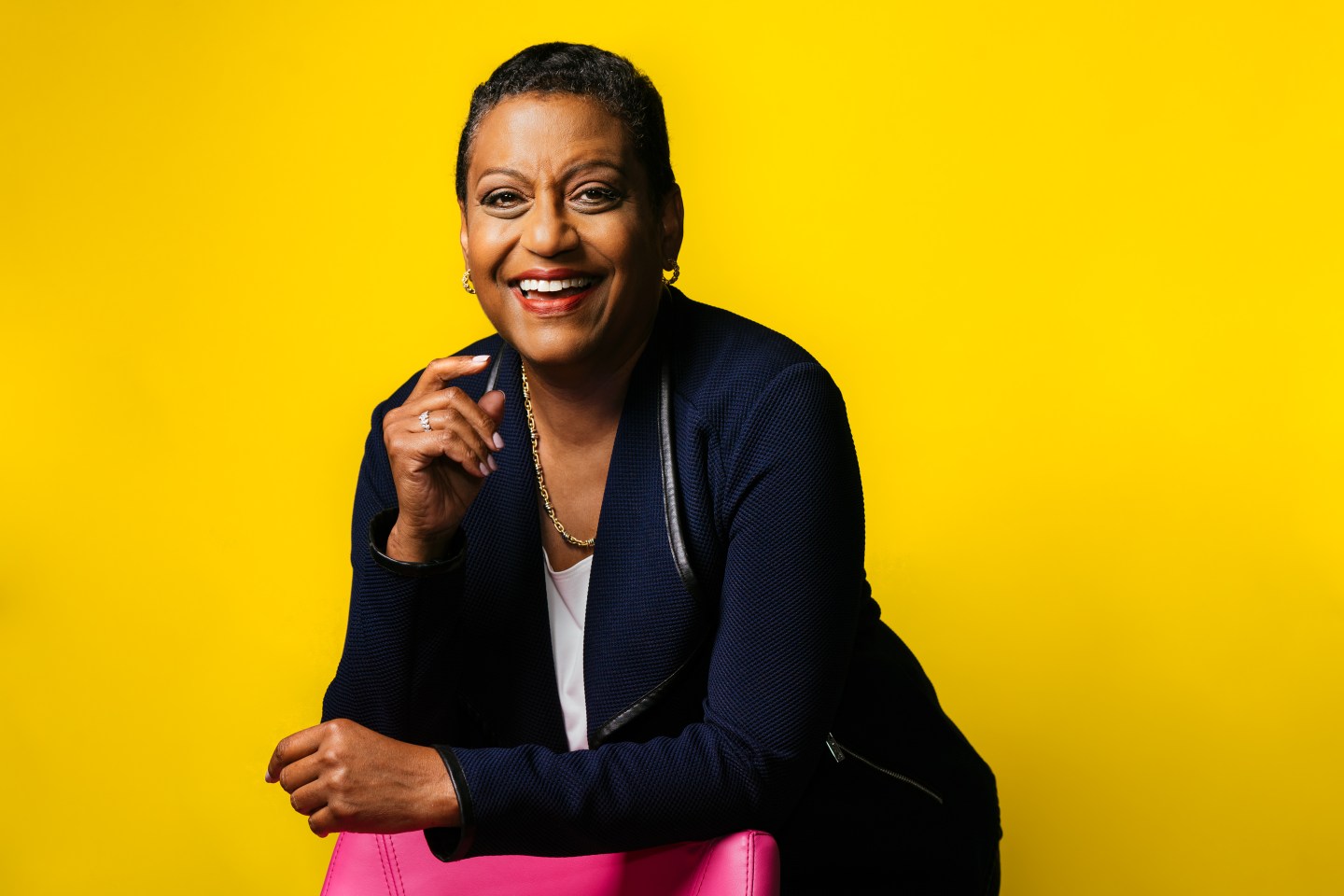 March of Dimes president and CEO Stacey D. Stewart at its headquarters in Arlington, Va., on June 13, 2022.
Photograph by Lexey Swall

The pandemic has set back women’s progress in countless ways. On the maternal health front, it has knocked many women out of the workforce, deepening health inequity for those from lower socioeconomic backgrounds. And it’s made the March of Dimes’ mission to ensure healthy pregnancies and births for American women and their babies ever more urgent, says Stacey Stewart. As CEO of the nonprofit organization, she’s drawn on her background in both the corporate and nonprofit sectors, strategizing new ways to raise money from well-heeled donors. (For instance, the nonprofit’s new acceptance of cryptocurrency for donations.)

“We’re trying to combat this issue of maternity care deserts with new partnerships,” notes Stewart, one of the few African American executives to lead a major nonprofit organization. Maternity care deserts are areas in which access to health care services for mothers and infants is limited or absent, and the problem is particularly acute for mothers of color and women in poor rural areas. Fifty-four percent of counties in the U.S. lack medical facilities that provide maternal care.

“I do think that the reason that we have in this country such poor outcomes for moms and babies is that we typically do devalue women in all parts of society, including access to care,” says Stewart.

Stewart, who was formerly a top executive at for-profit entities like Fannie Mae as well as nonprofits like United Way, is ardently pursuing closer collaborations with the private sector to help the organization, which has a $100-million-a-year budget, hit its goals. To name one such partnership, March of Dimes works with consumer products giant Reckitt to send “mother-baby buses” into areas in and around Washington, D.C., that lack maternity wards to provide prenatal care. She sees greater opportunity to partner with corporate giants, particularly health insurers and drugstore chains, as they open more health clinics in underserved areas.

Fortune: How has the pandemic worsened women’s access to health care?

What we’ve seen is that the COVID-19 pandemic has had a disproportionate impact on women of color. In 2020, the total maternal mortality rate spiked by 18%, but it was higher for Black and brown women. You can suspect that a lot of it had to do with the fact that many were hesitant to get the vaccine.

Some of your partners include major health insurers. Are they doing enough for maternal health?

A lot of them, to their credit, have really begun to invest more of their dollars into understanding the social determinants of health, such as access to good nutrition, access to safety and housing, good paying jobs, and how they all have an impact on our health. They’re starting to look beyond what happens in a clinician’s office.

Are the plans of big drugstore chains and big-box stores to build clinics in underserved areas a solution for bringing maternal care deeper into the country?

Oh my gosh, yes. I’m really so excited by the opportunities that exist with some of the chain drugstores and others like Walmart that are focusing on setting up medical clinics and delivering medical care in these places. Some 54% of all counties in the country have little to no obstetric care, and about a third of counties in the country have absolutely no access to obstetric care. A lot of the drugstores and big retailers are in these places and they’re often the most trusted brand there. To the extent that they’re now making available such health care services in those areas, we think it’s a tremendous opportunity.

What are some of the things March of Dimes is doing now to address the so-called “health care deserts”?

One of our partnerships is with [consumer goods maker] Reckitt, which owns the brand Lysol. Reckitt has a significant partnership with us to fund what we call “mom-and-baby mobile health centers” or “mom-and-baby buses.” These buses go into hard-to-reach places, including some of the poorest parts of Washington, D.C., Prince George’s County [Maryland], and parts of Appalachia, to bring health care to women. We’re trying to combat this issue of maternity care deserts with new partnerships.

You’re an advocate for the greater use of midwives and doulas. How would that help dent this problem?

We are talking to more ob–gyns who are very open to working alongside midwives because they understand that women often need more support at the time of delivery. One of the pieces of legislative actions we are pushing for is to diversify the perinatal workforce by making Medicaid reimbursement a part of how we can grow the number of midwives and doulas that are available and make them affordable. When you look at other highly industrialized countries as it relates to midwives, we’re at the low end of the totem pole in terms of the number of midwives that are practicing in the country.

In this uncertain economy, are you grappling with donor fatigue?

There’s not really donation fatigue, but what is happening is that there are a lot of pressures on the economy that put some families in financial stress. When you’re just trying to make your mortgage payment or rent payment and pay for other necessities, charitable giving is probably one of the first things that has to drop, and that puts a lot of pressure not only on March of Dimes, but a lot of nonprofit organizations. So we’re always trying to find new and innovative ways to reach individuals. Over the past decade or more, it’s been higher net worth individuals who are really driving the most philanthropic giving.

What are some of the newer ways you are reaching donors?

We have a new focus on donations made by cryptocurrency, and you’re seeing a big uptick in nonprofits receiving crypto donations. We also have many partners that allow us to not just focus on each individual donor, but we’re still very dependent on everyday donations from people. The ability to rely on not just direct mail but digital donations, cryptocurrency, and a philanthropic venture capital fund to raise more dollars has really helped us to grow.

You were the chief diversity officer at Fannie Mae in the late 2000s, years before the role became commonplace. What do you make of the proliferation of that title in corporate America?

I see it as a way to both diversify the workforce, which I think is really important, but also to build a culture of inclusion. I think the George Floyd situation and the Breonna Taylor situation obviously opened a lot of people’s eyes to a reality that a lot of CEOs had not really understood well before. What I worry about, in relation to the rush to hire a lot of chief diversity officers, is that if they’re not successful, then the companies may pull back from the role. My hope is that people will see this as a long-term commitment, and invest the resources to make it successful.

What’s different about being the CEO of a nonprofit versus a corporation?

I worked on Wall Street for five years; I worked for a small minority-owned investment banking firm for a couple of years in Atlanta. I have always seen myself as a business leader whether it is being in a corporate environment or in a nonprofit environment. As far as I’m concerned, the only difference between the two is the tax status of an organization, because I too have to worry about making payroll, and having a marketing strategy that makes us relevant and that drives people to want to support us. I think having business training and having gone to business school helps me to be a more effective leader at the March of Dimes because I bring a set of skills that some folks in the nonprofit sector may not have.

Get to know Stewart:

• Stewart is an amateur photographer who offers her services to young female athletes to build portfolios and a social media presence as they seek to increase their visibility while scouting for sports scholarships.

• While she was pursuing her MBA in finance at the University of Michigan, she was president of the largest African American student organization on campus, the Black Business Students Association.

• She joined the board of the Bipartisan Policy Center, a Washington, D.C.–based think tank that promotes cooperation between Republicans and Democrats, in January.