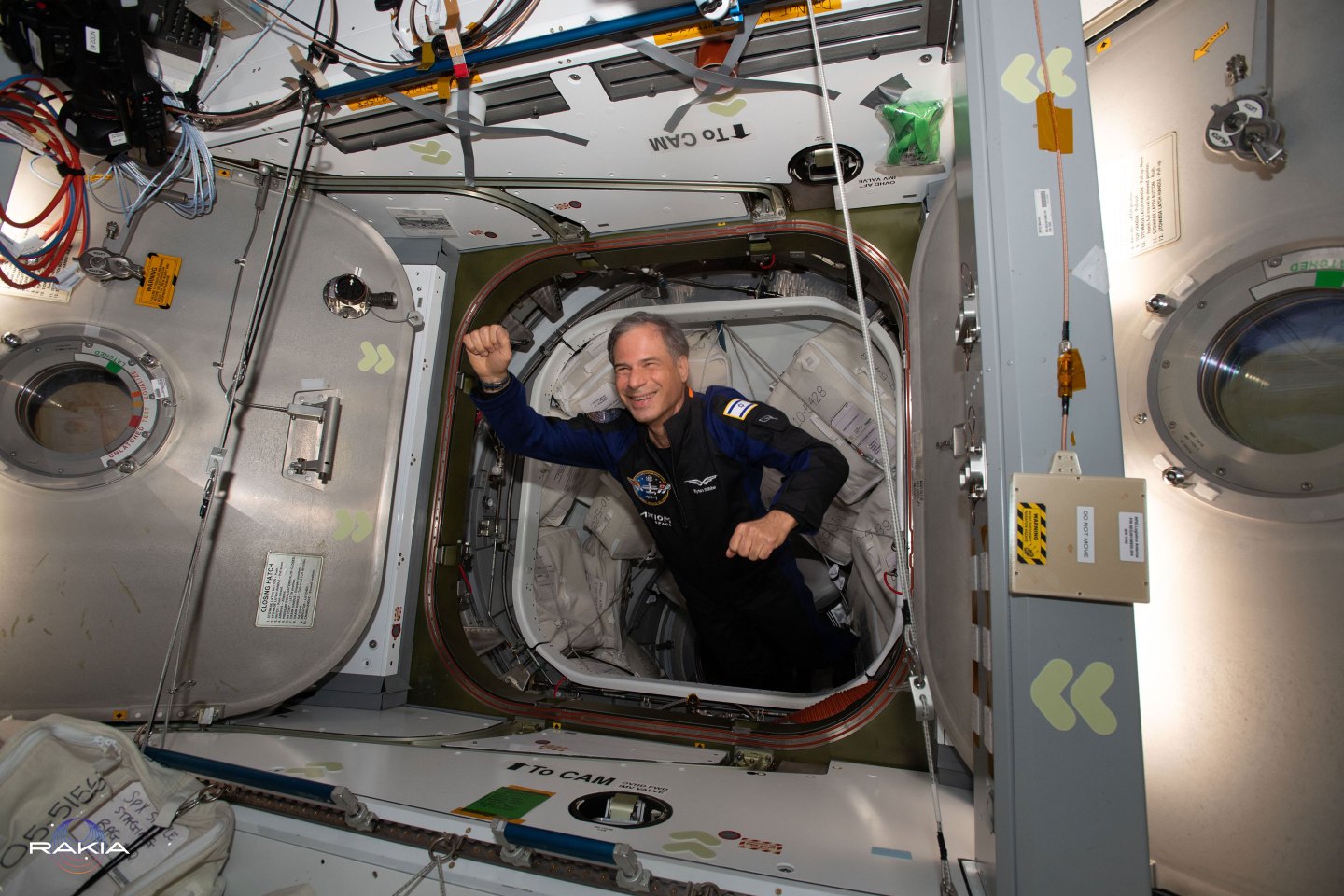 As our world faces a surge in the global population by 2050 and climate change challenges the availability of food and water, the race is on to find better and more efficient ways to access these resources and to save the planet from hunger.

The urgency is real: By 2030 the global population will need 35% more food, 40% more water, and 50% more energy than it consumes today according to a report by PwC. This quest for resources is also the rationale behind the recent push in space exploration: Knowing supplies will be scarce at home, scientists, entrepreneurs, and rogue billionaires alike are looking to the skies for solutions.

That is part of what Eytan Stibbe, a 64-year-old billionaire and a former fighter pilot for the Israeli Air Force, set out to do on April 8, 2022, when he launched into space on the SpaceX Dragon with three fellow astronauts and headed for the International Space Station (ISS).

His mission on the ISS was to perform more than 30 experiments—some of them in the fields of radiation, optics, and communications—but also to investigate if it’s possible to grow meat cells in space and chickpeas in zero-gravity conditions.

Stibbe and his fellow passengers—Michael López-Alegría, a Spanish American and professionally trained astronaut; entrepreneurs Larry Connor, an American, and Canadian Mark Pathy—also took part in the Axiom Space Ax-1 mission of the first, all-private astronaut crew headed to the ISS.

Stibbe spent a total of 17 days in space, 15 of which took place aboard the ISS. He and the two other entrepreneurs on Axiom’s mission each paid a reported $55 million for their trip, putting them in the same league of such billionaires in space as Virgin Galactic’s Richard Branson and Amazon’s Jeff Bezos.

Unlike other billionaires who have recently made space trips to promote their businesses, Stibbe’s voyage was different by design and involved research that could help pave the way for life in space as well as accelerate research in food science and other industries here on earth.

What Stibbe’s trip did, said freelance journalist Peter Ward in a phone interview from London, was put the experiments “front and center,” which better helped garner public support and made the mission “more palatable” to the average person.

That is because “we don’t see him as just a selfish person that is spending his money to fulfill his boyhood dream—you see him as doing something for humanity,” said Ward, author of The Consequential Frontier: Challenging the Privatization of Space.

In comparison, Branson launched himself 53 miles high on July 11 last year to the edge of space, a trip that lasted 15 minutes. Just days later, Bezos, the founder of Amazon, blasted off on his company Blue Origin’s first flight into space for a 10-minute trip.

Even if Stibbe paid for his trip, the Israeli arm of the mission, called Rakia, after the Hebrew biblical term that refers to the sky’s creation, was set up through a close collaboration among the Israel Space Agency, the country’s Ministry of Education and the Ramon Foundation, a nonprofit that promotes space education, scientific studies, and leadership.

And it was Stibbe who came up with the idea of undertaking experiments during his trip to space, said Inbal Kreiss, chairwoman of the Rakia mission’s scientific and technological committee. Experiments in space are important for future missions but also to improve knowledge on earth, she said.

“When Eytan came to my home and told me he is going to space, [he] asked me to take on the role of managing the scientific community,” she recalled. “I understood immediately that this is a rare occasion for many researchers, scientists, and Israeli entrepreneurs to get access to the ISS and perform their research there. For years technologies developed for space have helped us in our daily lives, whether in advanced materials or textiles.”

All of the selected projects were closely vetted by the special committee of Israeli researchers headed by Kreiss and approved as suitable to be conducted in space by both NASA and Axiom Space.

Astronauts on the space station today get regular shipments of a variety of freeze-dried and prepackaged meals for their dietary needs. As crews venture farther into space, traveling for months or years, they will not be able to receive regular shipments, and the vitamins in prepackaged meals break down over time. This creates a problem for astronauts’ health and has made finding a solution essential for longer missions.

One of the experiments Stibbe undertook in space was to grow meat cells—in a bid to provide astronauts with the ability to eventually create their own steaks and also to show how cultured meat can potentially be grown with limited resources.

The technology for creating meat in a lab setting—using just cow cells, for example, without the need to grow or slaughter animals and thus reducing the negative environmental footprint—is increasingly capturing attention of entrepreneurs and investors around the globe.

One such product was developed by Israel-based Aleph Farms, which last year raised $105 million from investors to bring its development to market. Stibbe is not an investor in the company.

Aleph is not the first or only company producing meat alternatives that mimic steak and other products. Companies like California-based Upside Foods have cultivated chicken and duck meat, while Air Protein, also Californian, has developed a method of making meat analogues out of carbon dioxide.

To produce its meat, Aleph Farms isolates the animal cells responsible for growing muscle tissue, nurturing them in tanks that act as fermenters, similar to what is done in a brewery. There, the cells are shaped into 3D structures that form the meat.

The space mission “was part of the vision of Aleph Farms to supply food with nutritional value to anyone, anywhere, anytime—and so also in space or Mars and the moon in future missions,” said Neta Lavon, chief technology officer and vice president of R&D for Aleph Farms.

The experiment Stibbe conducted in space explored whether meat cells can proliferate and duplicate in microgravity conditions, she explained. The second part of the experiment analyzed the potential of these cells to differentiate themselves and become the functional cells that build muscle tissue.

The firm is now processing the data from the experiment, comparing the cells grown in microgravity to those grown on earth.

Ideally, Lavon said, astronauts would head into space with just a vial of cells that would be incubated over a period of some three weeks in small bioreactors, eventually producing the steaks.

Even more important, she explained, would be the lessons learned for life on earth.

Because resources in space are so limited, along with the lack of weight and water, growing meat in these stringent conditions can be used to improve manufacturing efficiency on earth, she said. For example, because shipping materials to the ISS is so expensive and space is at a premium, the company needs to develop circular production methods such as transforming the growth medium into a powder that is lighter to carry and easily dissolved in recycled water; and using waste materials from each production cycle to launch a new production process.

These more efficient manufacturing methods can then be implemented on earth to reduce waste, emissions, and the environmental footprint, resulting in a minimum use of natural resources and energy.

The company, which has a dedicated space team among its workers, hopes to publish the results from Stibbe’s experiments by mid-July and to set up a plan for the creation of the mini-bioreactors based on these results.

Another experiment that Stibbe conducted was to grow chickpeas, or garbanzo beans, in space. Chickpeas are considered a “nutritional powerhouse” as they contain all nine essential amino acids that help our bodies function properly.

For the experiment, partners in the study, which included Israeli food maker Strauss Group and a team of students from a girls’ Orthodox high school in Yeruham, a town in the Negev desert, developed a miniature greenhouse in which to grow the beans.

The 20-by-10-centimeter device contained six cameras to observe the growth of the chickpeas from all angles as well as a nutritional gel instead of soil, which was made up mostly of water and some agar, a jellylike material. The high school students wrote the computer code that operated the greenhouse.

The agar “provides the structure, because in space there is no gravity and the water would go everywhere,” said Yonatan Winetraub, a researcher at Stanford University and the principal investigator of Aviv Labs, one of the partners in the space hummus study.

The choice of a gel instead of soil was made in acknowledgment of the growing scarcity of soil resources on earth as well as in space.

The team then planted 28 carefully selected chickpeas—not enough to make hummus but probably “just enough for a nice salad,” Winetraub noted—and sent them into space to watch them grow.

Chickpeas in space “grow differently” on earth, he observed, and faster in their early stages of development.

Given the lack of gravity, the sprouts of the beans can’t quite figure out which way to grow, while on earth they would develop vertically.

“It seems that chickpeas really rely on gravity to know in which direction to go,” he said.

The second part of the experiment was to control the growth of the chickpeas, to simulate growth in a scarce environment.

“As we witness global warming and as resources become scarcer, you can’t really have the plants grow as much as they’d like,” Winetraub explained.

The hope is that this research will lead to technology that will help mankind and plants on earth “do more with what we have,” and still provide food and essential nutrition, he noted.

The Outer Space Treaty, adopted by the United Nations in 1967, set out the principle that the exploration and use of outer space would be “for the benefit and in the interests of all countries and shall be the province of all mankind.”

Growing food in space, explained Ward, can bring “real benefit” to humans on earth as climate change takes hold and it becomes harder to cultivate crops in our own environment. If you can grow something in space in zero gravity or a really harsh environment, he said, then it will be possible to grow the same in harsh and arid areas on earth.

Perhaps Stibbe best summarized how his mission in space could be beneficial to earth and humanity in an interview he gave in March 2021 to Fun Fact Science, in which he showed the image of Vincent van Gogh’s Starry Night.

In the painting, explained Stibbe, there are unclear lines, a “mix of imagination and reality,” a blending of hills, a village, and nature with the sky.

It shows that the sky and the earth “go together” as one, he said. “It is not that you go to space in order to research only space travel,” he added. A lot of the research and work done in space ”are to better life on earth.”