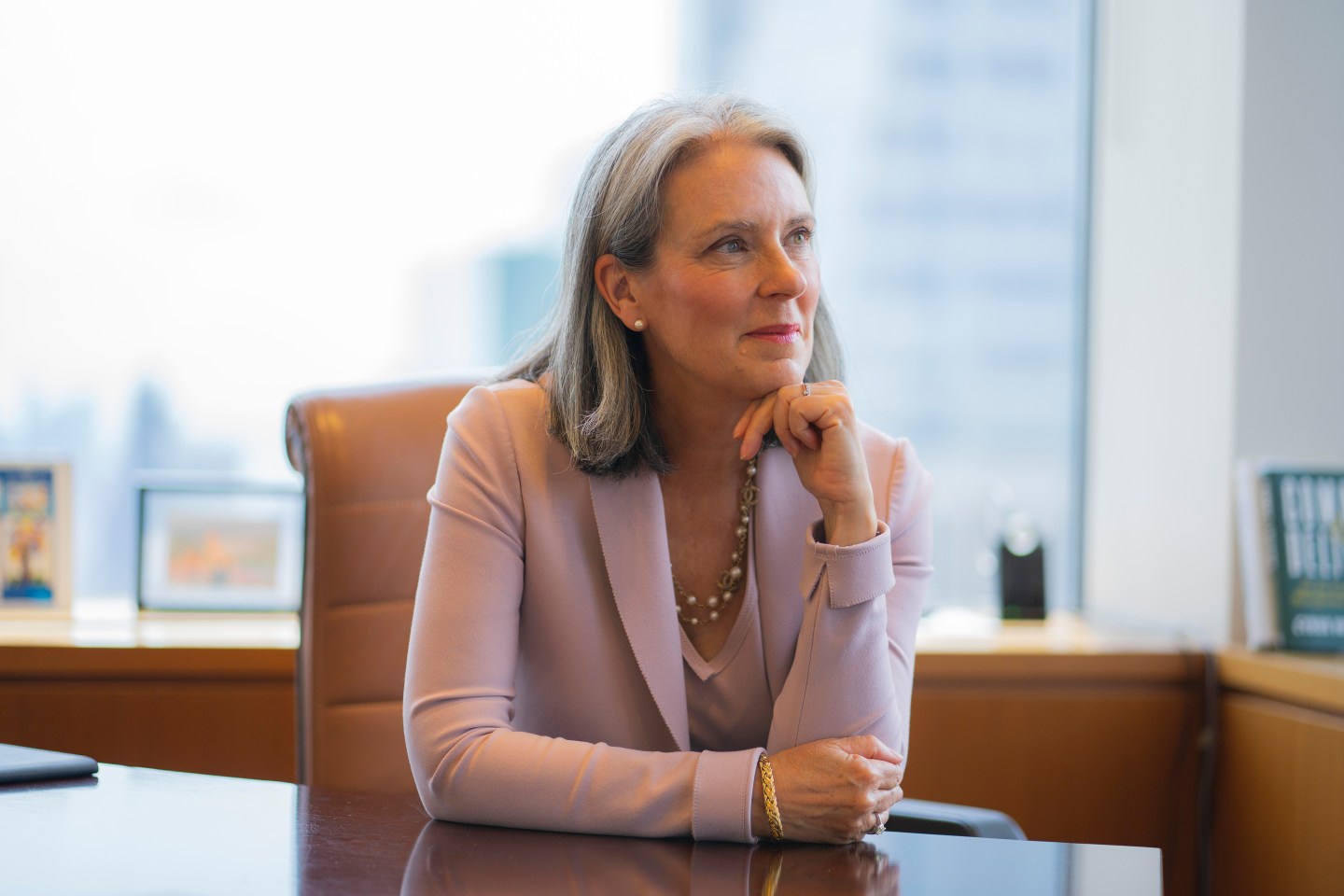 As CEO of Mercer, an employee benefits consulting firm, Martine Ferland has witnessed firsthand how the pandemic has upended the workforce. That includes employee expectations around benefits and return-to-office arrangements. While Ferland has her doubts about the effects of the so-called Great Resignation, believing it to be more so a matter of career “musical chairs,” she says the pandemic has undeniably transformed the employee-employer relationship in a permanent way.

“We’re in this super big experiment, following a huge crisis that has changed the world of work forever,” says Ferland, who has led Mercer, a division of professional services giant Marsh McLennan, since March 2019. “A new culture has been set in terms of the deal between employees and their employer,” she said.

Workers are more exacting about what perks they expect in return for continued employment and increasingly focused on their employer’s values, to name but two changes. At the same time, they are more likely to bolt from a company when the opportunity presents itself, reflecting how loyalty has waned over the past few years, accelerated by the pandemic. Lavishing employees with perks doesn’t mean they’ll be more likely to stay, warns Ferland, an actuary by trade and therefore very fond of leveraging data when advising clients. Things like flexibility, assistance with tuition, and wellness services are now “table stakes.”

In a Mercer survey conducted earlier this year, 70% of human resource professionals predicted higher than average turnover throughout 2022. That complicates things for employers, from how to structure compensation to creating and implementing future-of-work strategies. “A lot of our clients are focused on how to rebuild this culture of identity and of pride in being successful together as a team,” Ferland says.

The interview was edited and condensed for clarity.

Fortune: As CEO of a company that advises Fortune 500 companies on staffing issues, do you feel that “the Great Resignation” is a real phenomenon?

Martine Ferland: I don’t like the term itself because it’s vague. What are you resigning from? From the whole workforce or your own employer? It’s misinterpreted. There have definitely been higher attrition levels in different segments, mostly at the lower end of the wage spectrum—frontline workers and service workers, for instance. And in a way, some people have had the opportunity during the crisis to reinvent themselves, or decided that they want to do something different, so we see an exit from certain types of roles. If you look at knowledge workers, I think there’s a bit of fatigue, a need for change. So for me, it’s a bit more about career musical chairs. People are not resigning, they’re just looking for change.

And how is this shaping the work-from-home versus back-to-office debate?

The question is whether this job jumping is elevated because of what we’re currently going through. Is it going to be the norm because work is becoming more fluid, and there is less attachment to your employer? Is it because you haven’t seen your colleagues for so long? You come in two days, they’re not there. We haven’t cracked this hybrid work model yet.

Are employees less loyal to their employers post-pandemic than they were before?

But aren’t workers losing something by moving between employers more quickly?

When people left employers, they often used to say, “Oh, I’m sorry to leave my colleagues.” That’s something that was quite universal. But now, will you be sorry to leave colleagues that you haven’t seen for two years? I think that link has been frayed. A lot of our clients are focused on how to rebuild this culture of identity, of pride, of belonging, of being successful together as a team. How do you recreate those linkages? I think it’s more frayed at the knowledge-worker level, because they’re seeking experiences and a skills buildup, and they’ll go where they can get it.

Is it wise for employers to impose return-to-office diktats at this point? What are some of the mistakes you’ve seen them make?

You see the big tech companies starting to pull back a bit on their edicts. Maybe the banking sector, too. And they were very upset that people were not obeying the orders. (Read Fortune’s recent coverage of the quasi-rebellion among Goldman Sachs employees.) In contrast, you have some in the tech sector where it’s “work from anywhere.” We’re in the super big experiment after a huge, huge crisis that has changed the world of work forever. That, I truly believe.

A few weeks ago, Visa CEO Al Kelly told Fortune that work-from-home was fine if you just want a job, but not suitable for building a career. Do you agree?

I’m trying to be careful not to come across as a dinosaur, but I believe there’s some truth to that. It goes back to what I was talking about with culture and making things happen. You have to be able to navigate through the environment, and for that, you have to have more fluidity in your day. You have to have some impromptu conversations that spark ideas. You don’t get that on Zoom.

Is there anything to the stereotype that younger workers are less driven and want to work from home because they’re not as career obsessed as previous generations?

Human nature doesn’t change. It’s the environment in which you operate. That goes back to the loyalty question. I do believe that there’s a little bit more emphasis on who you work for. There’s more social awareness and a transparency expectation. Maybe previous generations would not allow themselves to set boundaries as much. The younger generation is far more willing to put up boundaries and more open to declare where they stand. The labor shortage helps a little by giving them a bit of leverage.

What can employers do to get workers back to the office? Free lunch on Wednesdays?

We’ve done pizza gatherings, ice cream Wednesdays, we’ve done all of this. But there’s a point where you have to create a genuine moment. You have to create a genuine need to be together. It is not about free lunch. It’s not really sustainable because it’s not genuine. There has to be value in coming here. It’s the old model, but I think there’s a reason why it worked that way: human nature. Free lunches can help prime the pump though.

If we end up in a place where some come in all the time and others don’t, could that create a two-caste system?

If you look at this survey that we ran, women and people of color in the U.S. are more likely to tell us they want to work remotely. You’re creating a diversity issue. That’s why we prefer a hybrid model where you come two, three days a week.

What are some of the employee benefits that have grown in popularity because of the pandemic and are even more important to talent attraction?

I would say work flexibility is probably the number one request right now from employees, surveys will tell you. Ours shows that 65% will turn down a job if it’s not flexible enough for them. Also, work-life balance through good mental health and wellness—which is broader than mental health—telemedicine, and ramping up employee assistance programs.

Will employers pull back from some of these benefits once the job market is less tight?

Will the marketplace for jobs or talent ever be less tight? Employers shouldn’t pull back, because it’s a question of retaining the best, regardless of what’s happening elsewhere. So I think it’s a trend that we’ve seen for years, and it’s not going to reverse itself.

One interesting finding in your latest survey is that organizational reputation and values are far more important to workers than they used to be. Why?

We’re all traumatized by what has happened in the last two years, and therefore, we want to do good and work for a company that has purpose and values. People have had the chance to reflect a little bit during the pandemic, whether it’s “Am I in the right industry?” “Is this industry vulnerable to shocks?” Or “It doesn’t make sense for me to do this long commute.” So there’s been more introspection, more reflection on the grand scheme of things than before, when we were in our little hamster wheels.

Get to know Ferland:

* She’s a trained actuary, educated at Laval University in Quebec City. While some see the field as dry, she says it gave her the analytical rigor needed to propel her career.

* In her younger years, Ferland was a ski instructor in her native Quebec, and her adventures included heli-skiing in the Alps and in British Columbia.

* Ferland grows vegetables in her spare time and boasts of occasionally providing neighbors on her street with homegrown tomatoes.