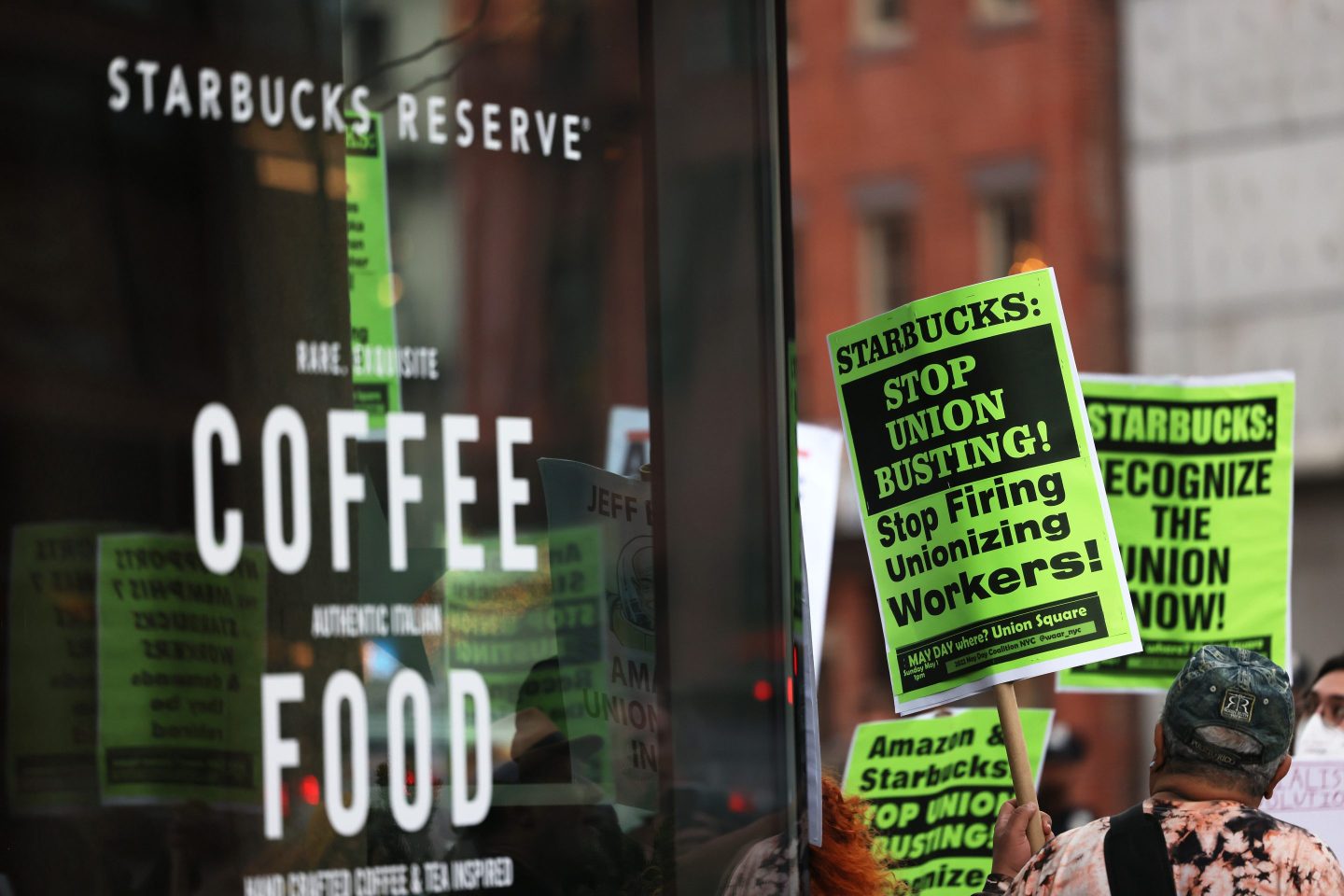 The workers’ union at Starbucks Corp. filed a complaint accusing the company of illegally shutting down a recently-unionized cafe, escalating hostilities between the coffee chain and the labor movement spreading swiftly through its stores.

In a Friday filing with the U.S. National Labor Relations Board, the Workers United union accused Starbucks of violating federal labor law by announcing it will permanently close an Ithaca, New York, store and alleged it was in retaliation for workers’ union activism.

Starbucks said the closure wasn’t related to union activism, but resulted from facilities, staffing, and “time and attendance” issues at the store.

“We open and close stores as a regular part of our operations,” Starbucks spokesperson Reggie Borges said Friday. “With deep care and urgency we continuously work to create the kind of store environment that partners and customers expect of Starbucks. Our goal is to ensure that every partner is supported in their individual situation, and we have immediate opportunities available in the market.”

Employees at the Ithaca location, located near the Cornell University campus, in April voted to unionize and mounted a one-day strike, saying an overflowing grease trap had spilled wastewater and oil onto the floor, making the store unsafe. The union is urging the agency to seek a federal court injunction to more quickly prevent or reverse the closure.

“Starbucks won’t get away with retaliating against us like this,” Evan Sunshine, one of the store’s employees, said in an emailed statement from the union. “Whatever it takes, however long it may take, we will persevere.”

In a Friday email informing the union of the planned closure, Starbucks attorney Alan Model said the company wanted to negotiate with Workers United regarding the impact on employees. “As you know, there have been many issues with regard to the condition of the store (e.g., the grease trap) and it does not make sense to further operate the store,” he wrote.

Workers United, an affiliate of the Service Employees International Union, has prevailed in unionization votes at over 100 Starbucks cafes around the country since securing its first landmark win at a Buffalo site last December. Labor Board prosecutors in recent months have issued complaints accusing Starbucks of misconduct including illegally retaliating against employees in several states, and have sued seeking injunctions against the company. Starbucks has denied wrongdoing.

Complaints filed with the labor board are investigated by regional offices and, if found to have merit and not settled, can be prosecuted by the agency’s general counsel and heard by administrative law judges. The rulings can be appealed to NLRB members in Washington, D.C., and from there to federal court. The agency can require remedies such as posting of notices and reversals of policies or punishments, but has no authority to impose punitive damages.

In a statement, regional Workers United leader Gary Bonadonna Jr. called the store closure a “blatant act of war” against the union’s members. “We have their backs,” he said.