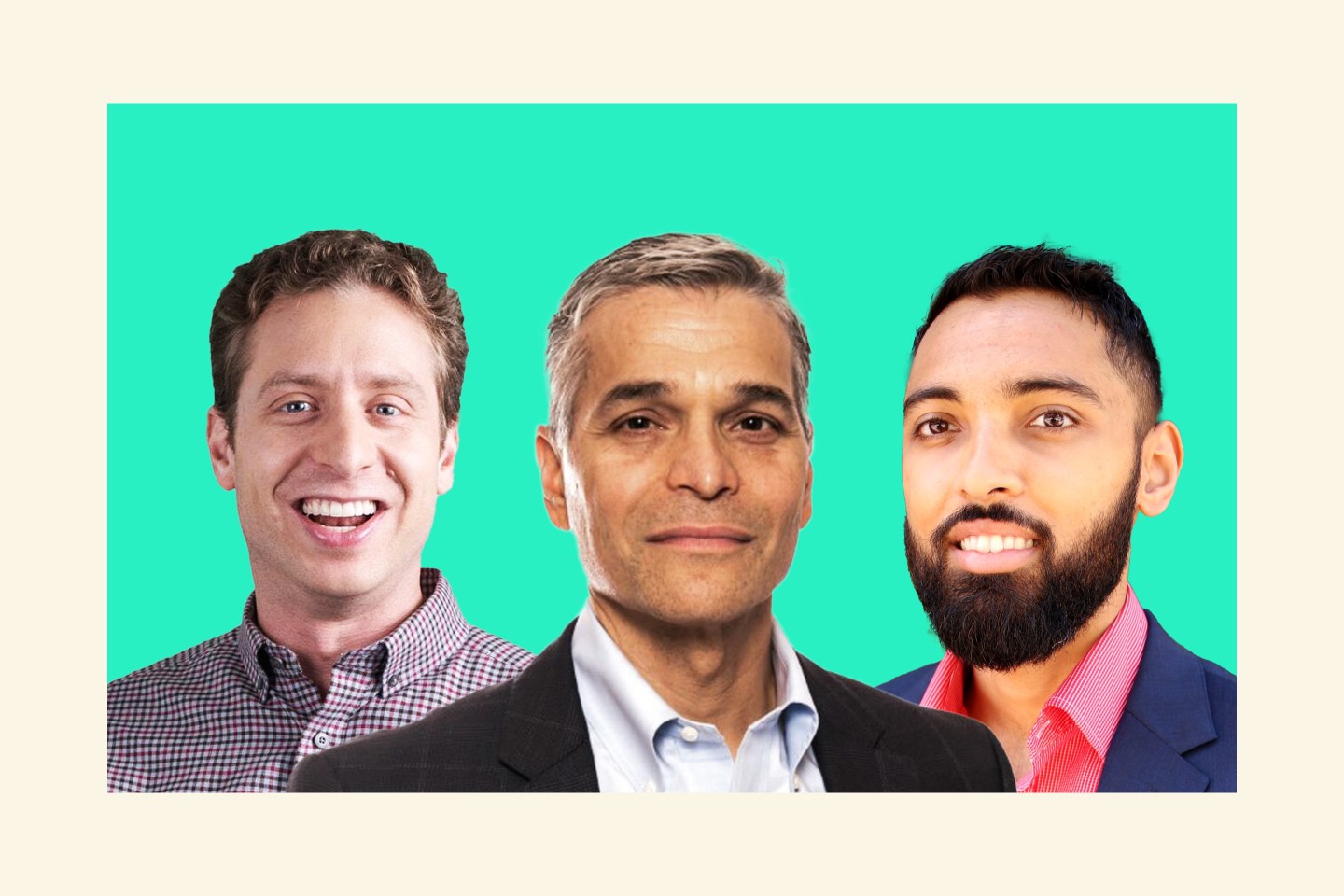 Ethan Kurzweil of Bessemer, Ravi Mhatre of Lightspeed, and Tushar Jain of Multicoin on how to value crypto startups.
Courtesy of Kurzweil, Mhatre, Jain

That’s how much venture capital investors have valued crypto startups Blockchain.com, OpenSea, and Yuga Labs, respectively. But with the crypto markets in turmoil, onlookers are wondering if those high-flying valuations are a thing of the past.

Though investors clamored to get in on startups in the rapidly-growing blockchain and Web3 space over the last year and in early 2022, things are turning fast. Though deals are still getting done, amid the current selloff in the crypto markets and the collapse of the Terra-tied stablecoin UST and Luna, there’s a sense that valuations—which some in the venture community had already pointed out were stretched beyond reality—are due to come back to earth. “Valuations definitely were running hot for a while, and is this the year that finally reverts? … It feels like a very distinct possibility,” Ethan Kurzweil, a partner at Bessemer Venture Partners, tells Fortune.

Stepping back, through the first several months of the year crypto valuations were soaring: Late-stage post-money valuations for venture-backed crypto and blockchain companies rose an average 91% to roughly $4 billion, according to PitchBook data as of April 21; Traditional global late-stage valuations, meanwhile, slumped on average 14% to about $698 million during that timeframe, per PitchBook. Many of those crypto rounds, like NFT marketplace OpenSea’s January fundraise, were in the hundreds of millions.

Bessemer’s Kurzweil argues valuing crypto startups is “a decidedly inexact science right now. That’s, I think, something that will probably come out of this correction—there’ll be more precision around that,” he suggests.

There are two areas VCs are eyeing in their portfolios right now, depending on the fine print of their investments.

VCs have to mark to market, or essentially fair value their investments, on a quarterly basis. For equity investments in crypto companies, Kurzweil and Tushar Jain, cofounder and managing partner at Multicoin Capital, say they’d usually only mark to market if there was another transaction, like the company raising another funding round. Jain, for one, doesn’t anticipate they’ll be too many valuation cuts in the crypto startup scene: “I don’t expect many companies in crypto to be raising downrounds. I’d be very surprised to see that happen,” he says, in part because many crypto companies raised lots of funding over the past year. Rather, those companies are likely to go into ‘lean’ mode to survive the crypto winter.

But in the case of holding liquid tokens in a fund (which Multicoin does), a firm would have to mark to market those investments far more frequently—which could be “arbitrarily” frequent, like “every 30 seconds,” Jain suggests, as crypto trades 24/7. So for those VCs investing in tokens, “crypto liquid portfolios will be marked down alongside the market,” he says.

But even if valuing crypto startups is more art than science, how do VCs actually come up with hard numbers and check sizes for crypto investments? And what do they look at to determine if a crypto project will yield that ever-sought-after 10x return for their limited partners? Fortune spoke to three venture capital investors to find out.

Like many crypto believers, Lightspeed Venture Partners’ founder and managing director Ravi Mhatre says he believes blockchain platforms could be “a next generation compute storage network framework,” and he looks at parallels with other big technology shifts like the internet and the Web2 mobile revolution in terms of the potential sizes of companies. With the space still in “early innings,” and with the addition of tokens, he believes that’s leading to sentiment where investors are “willing to pay relatively higher valuations for companies in crypto right now, even though the overall markets are down and even though crypto has traded down,” Mhatre suggests. He says Lightspeed’s job is to find founders with the vision and grit to execute: “If we’re right about selecting into those kinds of situations, even at today’s valuations, these companies will be able to generate venture-style outcomes in a success case,” he says.

Lightspeed has invested $600 million through the end of April in blockchain and Web3 companies (with the majority of those dollars invested in the past two years)—a sizeable chunk of the roughly $1.5 billion they’ve invested in fintech broadly since inception, the firm told Fortune. Among their investments is buzzy layer one (or L1) blockchain Solana and crypto exchange FTX.

It may look on the surface like some of these huge valuations for comparably new projects (some with non-traditional structures considering tokens, for one) come out of thin air. And according to Eric Risley, the founder and managing partner of digital assets M&A and investment advisory firm Architect Partners, there’s certainly an element of the intangible: “What’s the market willing to pay? At the end of the day, that’s what matters at any one point in time.”

Mhatre says there’s a lot of crossover when it comes to how they approach valuing crypto and more traditional companies: “It’s always about, at some really, truly fundamental level: the people, the specific idea or product or vision for products, and then the market opportunity.”

And Risley, Kurzweil, and Jain agree that a large part of the process has similar elements to typical venture investing. “What drives valuation regardless of whether it’s an investor or an acquirer, comes down to whether or not you can build a business that has a valuation that can … provide a return relative to what you’re paying for it today,” notes Risley. “In other words, if you think the business is going to be worth $10 billion in five years, you know, are you willing to pay $2 billion today? That’s the fundamental calculus.” He believes “traditional valuation methodologies and approaches are still relevant.”

That could include looking at things like a company’s books, income statement, revenue growth, and comps, if applicable (depending on the type of business and stage of its development). Kurzweil says they look at comps for later stage companies, but for earlier stage projects where comps might not be as relevant, they examine “a rough band of where valuations come out, depending on what progress has been made, but they’re very, very rough.” Others like Jain, however, suggest comps aren’t as relevant in the space, claiming he “rarely, if ever” hears crypto startups using competitors’ valuations “as a reason to support their valuation.”

Venture investors will also invest in and use tokens for various reasons, including to stake tokens (which involves putting tokens into a pool and earning a yield on them), using the tokens to secure the network, and to use the project’s products, like DeFi products, Multicoin’s Jain notes. Considering some startups’ tokens have soared thousands of percentage points, like Solana’s SOL token, for example, they can be lucrative for early investors.

Indeed, one big factor Mhatre says Lightspeed considers is the project’s token, if they’ve launched it. “There are now Web3 companies that have had successful token launches,” with “highly-traded” tokens that have “implied kind of market values for whatever the platform is, and so we’re looking carefully at those to infer what we think value creation could be for a particular new project and for a token that gets issued,” he says.

With many crypto projects, especially L1s and L2s (which stand for layer one and layer two blockchains), some of the math for those valuations is built in. Tokenomics, which is the economic structure and supply and demand dynamics of a token, is another thing VCs like Mhatre, Kurzweil, and Jain look at. “It’s a little bit of math around, ‘hey, what is the potential revenue stream for transactions in the network,'” and if you’re a token holder and earning staking fees, “what’s the sort of aggregate value of that stream that could accrue to a platform” and to validators, Mhatre notes. And you can “make some assumptions” and incorporate unit economic analysis around that and “ultimately get to a revenue stream.”

Indeed, Mhatre argues that, while some of those high valuations come from the enthusiasm (or, in less eloquent terms, hype) around the long term potential of crypto, “you can really put your finger on specific revenue scale and the rate of growth of revenues for platforms,” like Solana or Polygon, both of which are among Lightspeed’s investments and which, he argues, “have the potential over time to scale to millions of users.”

For those kinds of projects (like L1s) that are “more at scale,” tokens can create underlying revenues generated from fees and staking on the network, Mhatre notes. “These are companies that have very substantial revenues in the many hundreds of millions and that can happen very quickly for a crypto company that has some type of a viable value model where tokens are being issued, and they’re starting to be traded in a liquid way,” he says.

TVL, or total value locked, which measures the total value of crypto in DeFi projects on a blockchain, is another important metric Mhatre and others factor in for valuations. Mhatre says it can give them an indication of the market sense “for the aggregate value of the tokens that are both held in reserve and in circulation.”

Multicoin’s Jain, meanwhile, says they use a rough formula when getting to a valuation: “There’s three numbers you’re multiplying together,” he says: the “market size times value capture times some element of risk, like execution risk and other types of risk. And if you can estimate those three numbers very roughly, you can get to a reasonable valuation.” Breaking that down, he says the “most important attribute” of the three is figuring out the market size. “If there is a huge unmet market need, I think that’s more important than team, it’s more important than … timing of when you invest,” he says.

Beyond that, Jain says they are looking at the value capture, or the project’s ability to retain value from transactions—which, in crypto, is easier said than done. “Everything is open source, you have no IP, so you can’t monetize that way. Everything is permissionless.” How the project’s token is designed is “core to the value capture,” he says. Those two figures are then multiplied by a figure representing risk, which he says could include execution risk, how well they understand the project’s product, what is and isn’t built yet, their ability to ship the product, how “technically complex” it is, and whether or not they might have trouble hiring the team they need. The process of figuring that out could include things like speaking to the engineers on the team and others to get context, he says.

Ultimately, though, “there’s subjective judgment that needs to go into it,” says Jain. After all, crypto wouldn’t be crypto without a little speculation.