Should unpaid labor like childcare be part of the GDP? One group is trying to make it happen 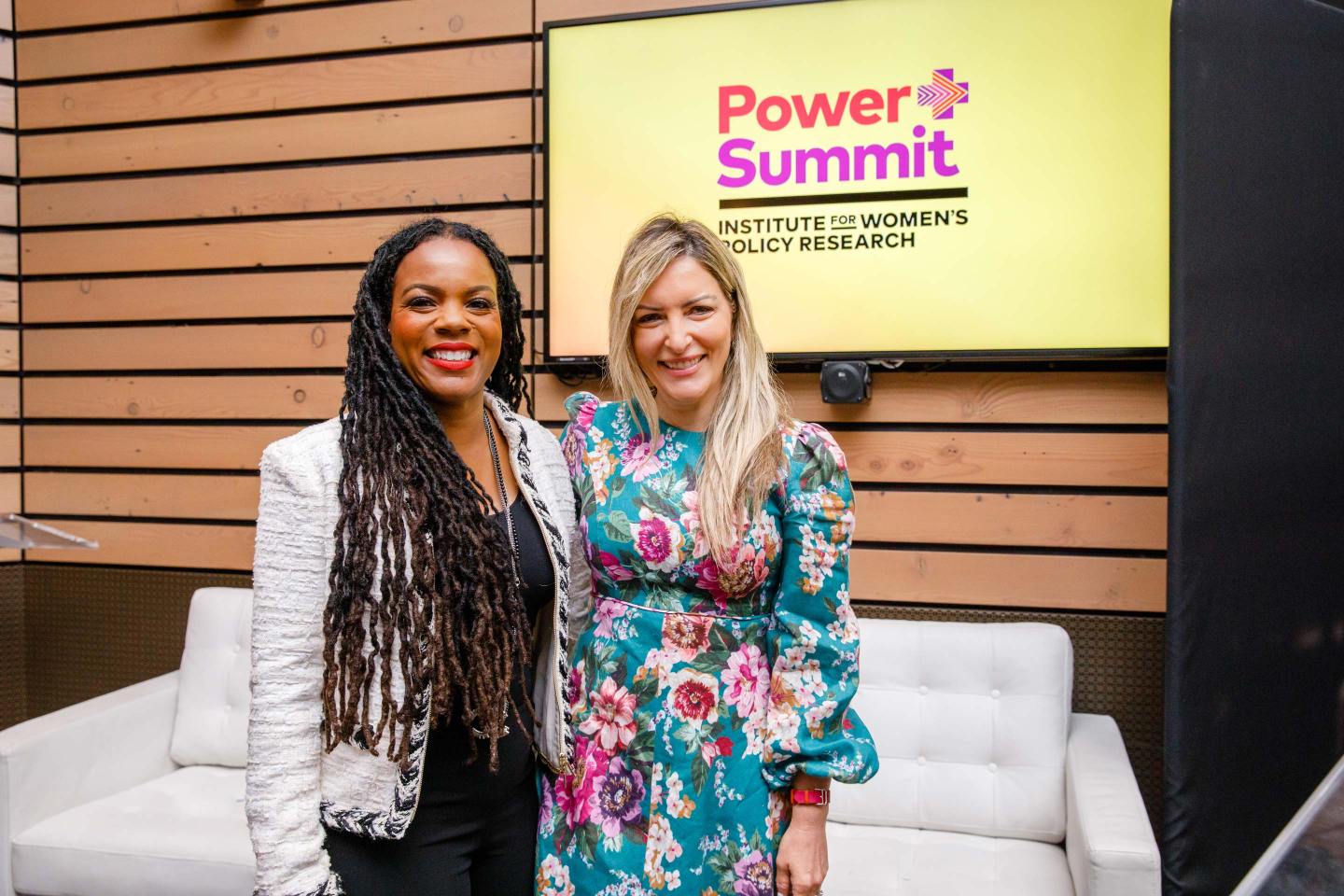 C. Nicole Mason and Eve Rodsky at the launch of Unpaid Work in the GDP by 2030, which formally kicked off last night at the IWPR Power+ Summit in San Francisco.
Danielle Flowers—Amber Iris Photo

In February 2020, about one month before the pandemic turned our family and work lives upside down, author and advocate Eve Rodsky sat on a panel at Davos and made an eerily prescient proclamation: Because of unpaid labor, our country was “one crisis away from losing 30 to 40 years of women’s economic participation in the workforce.”

Rodsky came to this conclusion based on years of her own research, survey and interviews with over 1,000 women about childcare. For most mothers, a caregiving emergency at home meant they would have to exit the workforce.

Just a month after Rodsky’s speech, when the global pandemic hit and schools closed, women found themselves facing a real-life catastrophe. They were disproportionately picking up more of the housework and childcare responsibilities while burning out trying to also do their wage-earning jobs. As a result, millions chose to leave the workforce altogether, and two years later, they have not fully returned.

This has created an unprecedented economic crisis that will likely have reverberations on society—and the economy—for decades, if not generations. Lost wages, lost retirement savings, lost opportunity.

But what if all that unpaid work counted for something? What if we assigned some monetary value to the caregiving work, or even included it as an input to the Gross Domestic Product? How would that change the structure of how women spend their time, how that time is valued, and how we view the country’s overall economic health?

Rodsky believes a more formal system of measuring unpaid work would lead to a different social contract, changing how we as a larger society see and value this crucial labor. This theory became the beginning of a campaign to bring this concept to the forefront—Unpaid Work in the GDP by 2030, which formally kicked off last night at the IWPR Power+ Summit in San Francisco.

For anyone following issues of women and the workplace, the attendees of the first in-person meeting reads like who’s who of care economy thought leadership: C. Nicole Mason, CEO of IWPR, who coined the term “she-cession,” Ai-jen Poo, co-founder of the National Domestic Workers Alliance, Reshma Saujani, who crafted the Marshall Plan for Moms. Domestic economists and psychologists are also involved in the project, including Misty Heggeness from the U.S. Census and Darby Saxbe from USC. Following the April meeting, the official kickoff for the effort will be September 29-30, 2022 in Los Angeles, with an all-day multidisciplinary conference on unpaid labor.

At the dinner Wednesday night in San Francisco, Rodsky announced the Fair Play Policy Institute, a private foundation focused on research and policy work to raise awareness of the importance of valuing unpaid labor. The goal is to take meaningful action to change the value proposition in this country, to equate the time spent with a child in the pediatrician’s office with equal worth to time spent in a boardroom.

In the U.S. many social benefits are tied to employment, including paid time off, retirement savings, and healthcare coverage, and that puts those who perform unpaid labor at a significant disadvantage. At the same time, this country couldn’t function without millions of people putting in millions of hours to care for children and elderly. Even if it’s unpaid, this work has value: Estimates from the Bureau of Economic Analysis shows that adding household production to the GDP during the onset of COVID would increase GDP growth rate by three percentage points.

So why is such vital work excluded from the GDP in the first place?

Just eighty years ago, British economists James Meade and Richard Stone devised a method of national income accounting and created the Gross Domestic Product, a way to measure goods and services bought and sold. Even then—as now—there were vocal critics who argued that excluding unpaid labor from this measurement was a grave miscalculation. Economists and anthropologists argued that unpaid labor, whether it be collecting firewood and hauling clean water in developing countries, or birthing and caring for children in literally every country, was fundamentally necessary to a nation’s economic success.

Phyllis Deane, Meade and Stone’s research assistant, argued for the need to include unpaid household labor in the GDP. Neither economist would heed her advice. In 1953, the United Nation’s first System of National Accounts for calculating GDP was created, a system that entirely ignored unpaid household labor. And ever since, it’s been one of the main indicators that economists and policymakers use to judge the health of the economy.

By failing to count unpaid work, the current GDP calculation creates a hidden tax on millions of unpaid workers—primarily caregiving women, the stay-at-home mothers and daughters who are forced to reduce hours or leave jobs to care for children or parents. One estimate shows family caregivers lose $300,000 in lifetime earnings, which cuts into social security contributions, pensions, stable retirements, and other benefits.

Faith Rashid, an occupational therapy assistant in Oyster Bay, N.Y., was used to long days of caregiving—much of it unpaid. For years, she commuted 30 minutes each way to the rehabilitation center where she worked with patients, helping them to relearn basic tasks from walking to putting on socks to using the toilet. Back home after work, she began her “second shift” caring for her elderly father who has stage four metastatic lung cancer. All of this ground to a halt during the pandemic, though, when she quit her paying job to make sure her household stayed COVID-free.

Like millions of women in the United States—and increasingly men with aging parents—the burden of her father’s care fell to Rashid—with no remuneration or economic support to show for it. She was performing the exact same work for both her paid job and for caring for her father. But our current model of GDP only counts her day of paid caregiving as valuable.

But is making such a major change to the national accounting system even plausible? “This is totally feasible,” says Misty Heggeness, principal economist for the U.S. Census who studies the care economy. “The problem is that we’ve never historically prioritized it.”

There is a current U.S. system that does measure unpaid labor already: the Bureau of Economic Analysis, the agency that works alongside the U.S. Census to measure population growth and trends. Data from the American Time Use Survey informs economists of how people spend their time, so it’s possible to track unpaid labor alongside paid work.

“It’s called Accounting for Household Production in the National Accounts,” Heggeness explains. “They essentially generate these alternative GDP measures that incorporate household production. Part of the problem of household economics and economics of care is that we don’t have a strong traditional method of systemically measuring activity in a household.”

The study of economics values using consistent measures like GDP, which allow countries to track changes over time, explains Nancy Folbre, professor emerita of economics at the University of Massachusetts-Amherst. Instead of adjusting the components of the GDP, Folbre argues that it would be more prudent to create an expanded measurement that takes into account the value of unpaid work, using the American Time Use Survey data. This “Expanded GDP” would give a better measure of the health and well-being of the country, and a more accurate measure of how society is faring.

This would show “how important unpaid work is to our living standard and for our family members who are dependent, children, sick, or experiencing disability,” says Folbre.

There are some issues to including unpaid labor in the GDP

But there can be unintended drawbacks to including unpaid labor in the GDP when it takes into account work that people are doing in place of government-provided amenities, argues Sonalde Desai, distinguished university professor at University of Maryland, who studies women’s labor force participation.

Desai cites the example of developing countries without piped water or stable fuel sources. If the unpaid labor required of the men and women who walk miles for clean water or to collect firewood were added to GDP, it would show a richer nation than is accurate. An example in the United States would be the work a parent does after hours to help a child make up for a failing school. “That time has a value, but if that value is added on to GDP that would create an image that it is producing a lot more, when it’s actually failing in providing good quality schools,” said Desai.

Instead of modifying the existing GDP, Desai recommends looking at the satellite accounts kept through BEA and the ATUS to get a better picture of overall economic health. These satellite accounts, says Solar, can be assigned a value so that unpaid laborers would be able to contribute to Social Security and retirement, or take paid family leave. The hard part would be coming up with an appropriate wage for the unpaid work, taking into account the market cost and the experience and education of the person doing the work. And valuing the care work that is done predominantly by women, often women of color who are paid low wages, is a complicated issue that the larger economy is still struggling with.

“Society has never actually fully valued all the invisible work women disproportionately engage in,” says Heggeness. “Any pushback today is probably due to those in power, who historically are advantaged by this invisible work, continuing to undervalue its real contributions to a healthy and robust economy.

Rodsky believes that a better system to value unpaid work, predominantly done by women, will lead to better outcomes for women. “How can knowledge not be power?” she says. “I can’t tell you what it will look like when [unpaid labor] is measured, but I can tell you what it looks like when it’s not. Reproductive rights held back. No paid leave. Zero childcare options. What did it do for us not to have it in the GDP? Could it really get worse? We might as well try something new.”

Rebecca Gale is a reporting fellow with Better Life Lab at New America, from which support was provided for this reporting.