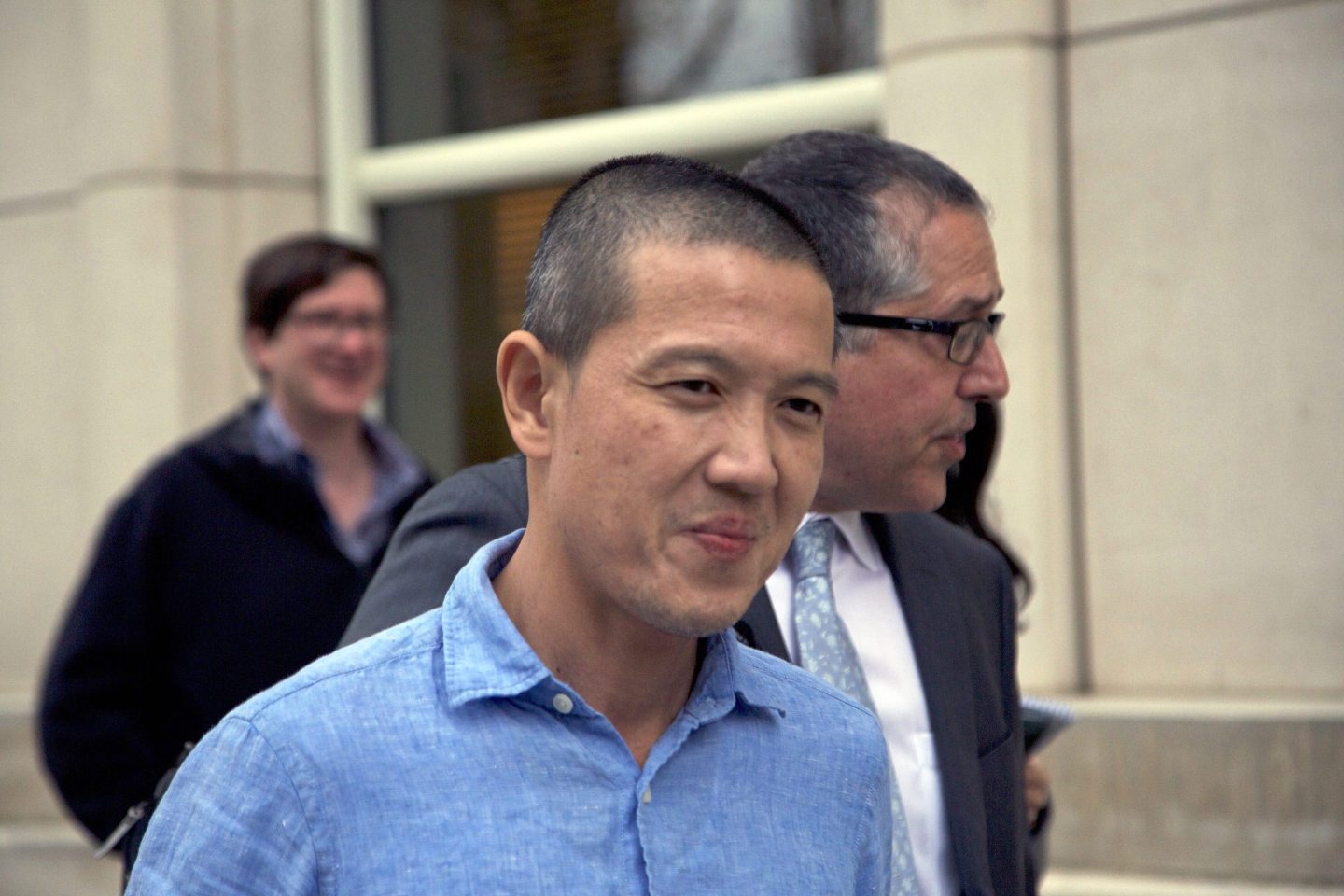 Roger Ng, the only Goldman Sachs banker to go to trial over the global 1MDB scandal, was found guilty for his role in the epic looting of the Malaysian fund.

Ng, 49, was convicted of all three counts in the case, including conspiring to violate U.S. anti-bribery laws and conspiring to launder money. He faces as many as 30 years in prison.

The verdict came after an eight-week federal trial in Brooklyn, New York, that featured startling confessions from Tim Leissner, Ng’s boss at the time. Leissner, who pleaded guilty, was the key witness against the former Goldman Sachs Group Inc. banker. On the stand, he admitted to telling a raft of personal and professional lies in the multibillion-dollar plunder of 1Malaysia Development Bhd., for which Goldman arranged a trio of bond deals.

It’s a hard-won victory for the U.S. in the aftermath of fraud surrounding the sovereign wealth fund, set up to help Malaysia’s people and economy but instead was used to line the pockets of government officials, bankers and intermediaries with an estimated $2.7 billion. Alleged mastermind Jho Low, who the U.S. says bribed government officials to win the business for Goldman—and a $1.42 billion jackpot for himself—remains at large. Proceeds from the scam were used on items including a $200 million super-yacht and to finance “The Wolf of Wall Street.”

The case was a black mark on Goldman. In 2020, a Goldman unit admitted it had conspired to violate U.S. anti-bribery laws, the first guilty plea ever for the firm, founded in 1869. The bank paid more than $2.9 billion, the largest penalty of its kind in U.S. history, and more than $5 billion globally for its role in the scheme.

Leissner, once Goldman’s Southeast Asia chairman, was the highest-ranking Goldman banker to plead guilty to the scheme to steal from 1MDB in return for more than $60 million in kickbacks. Ng was the firm’s former head of investment banking in Malaysia.

Former Malaysian prime minister Najib Razak, who prosecutors said pocketed $756 million, was sentenced to 12 years in prison after being convicted on corruption charges in Malaysia. He is free pending appeal.

Ng’s trial revealed new details of the scheme. Low hustled the stolen billions out of 1MDB immediately after each bond deal Goldman completed for the fund, according to testimony from prosecution witnesses. The FBI said those funds were then directed to co-conspirators. Among them were Najib and his stepson, who got $238 million, including $60 million he spent financing the film, according to the U.S. Jurors were shown how the scheme funded a $23 million pink diamond necklace for Najib’s wife, as well as more than $1 million in luxury handbags for her.

Central to the government’s case was an FBI chart showing that Leissner sent $35 million of the booty to a shell company controlled by Ng’s wife. The FBI said she later spent $300,000 on diamond jewelry and $20,000 on a gold hourglass.

The panel also heard testimony about Low’s lavish spending, including more than $3.6 million he dropped on a birthday bash in Las Vegas, which records show he paid “Wolf” star Leonardo DiCaprio $250,000 to attend. A casino employee testified that Low wagered almost $87 million at his resort and lost about $26 million at baccarat. Low’s partying eventually caught the attention of bankers and authorities.

Along the way, Leissner told the jurors he created phony email accounts in which he posed as his wife to talk to his girlfriend, bought his mistress a $10 million London home after she threatened to disclose the 1MDB fraud and was twice married to two women at the same time, both times forging divorce documents.

The U.S., which called 26 witnesses, argued that Ng and Leissner concealed the fraud from their superiors at Goldman, which made more than $600 million arranging the three 1MDB bond deals in 2012 and 2013. Goldman paid Leissner at least $12 million, while Ng got $3 million after two of the bond deals closed, the government said.

Leissner, who pleaded guilty in 2018, spent 10 days on the witness stand, more than five of them under withering cross-examination by defense lawyer Marc Agnifilo, who called him a “cunning liar.” In addition to his own kickbacks, Leissner testified, he paid Ng more than $35 million, which prosecutors said was laundered through a series of offshore entities.

The former star Goldman banker told the jury that he and Ng attended a February 2012 meeting at Low’s London home in which he said the financier charted out which Malaysian and Abu Dhabi officials would receive bribes. Low told Ng and Leissner they would also be “taken care of,” Leissner testified. After the meeting, Leissner said, he was “motivated” because he wanted to be “a hero” for Goldman, and Ng was “happy he was going to be paid some money.”

On cross-examination, Agnifilo noted that Leissner first mentioned such a chart to the FBI in 2021, almost three years after he began talking to the bureau. The defense also cited a 2010 report that said Ng raised “red flags” and gave “negative feedback” about Low and said he didn’t find the financier’s claims about his wealth “credible.” Agnifilo argued that Leissner falsely implicated Ng and lied repeatedly to gain favor with prosecutors.

The defense called only a handful of witnesses—notably Ng’s wife, Hwee Bin Lim. Lim testified that the $35 million infusion prosecutors called a kickback was for an unrelated transaction in China with Leissner’s former wife. The offshore entities were in Lim’s mother’s name, records show.

Prosecutors argued that emails linked to these accounts showed that while while Lim’s mother was the beneficial owner, Ng and his wife controlled the funds. Soon after investigations into 1MDB were launched in Malaysia and Singapore, Ng also deleted a series of email accounts he had used to communicate with Low and others involved in the scheme, according to the U.S.

—With assistance from David Voreacos.