Meet Jho Low, the fugitive 1MDB financier known as ‘The Asian Great Gatsby’ who paid Leonardo DiCaprio to be his friend 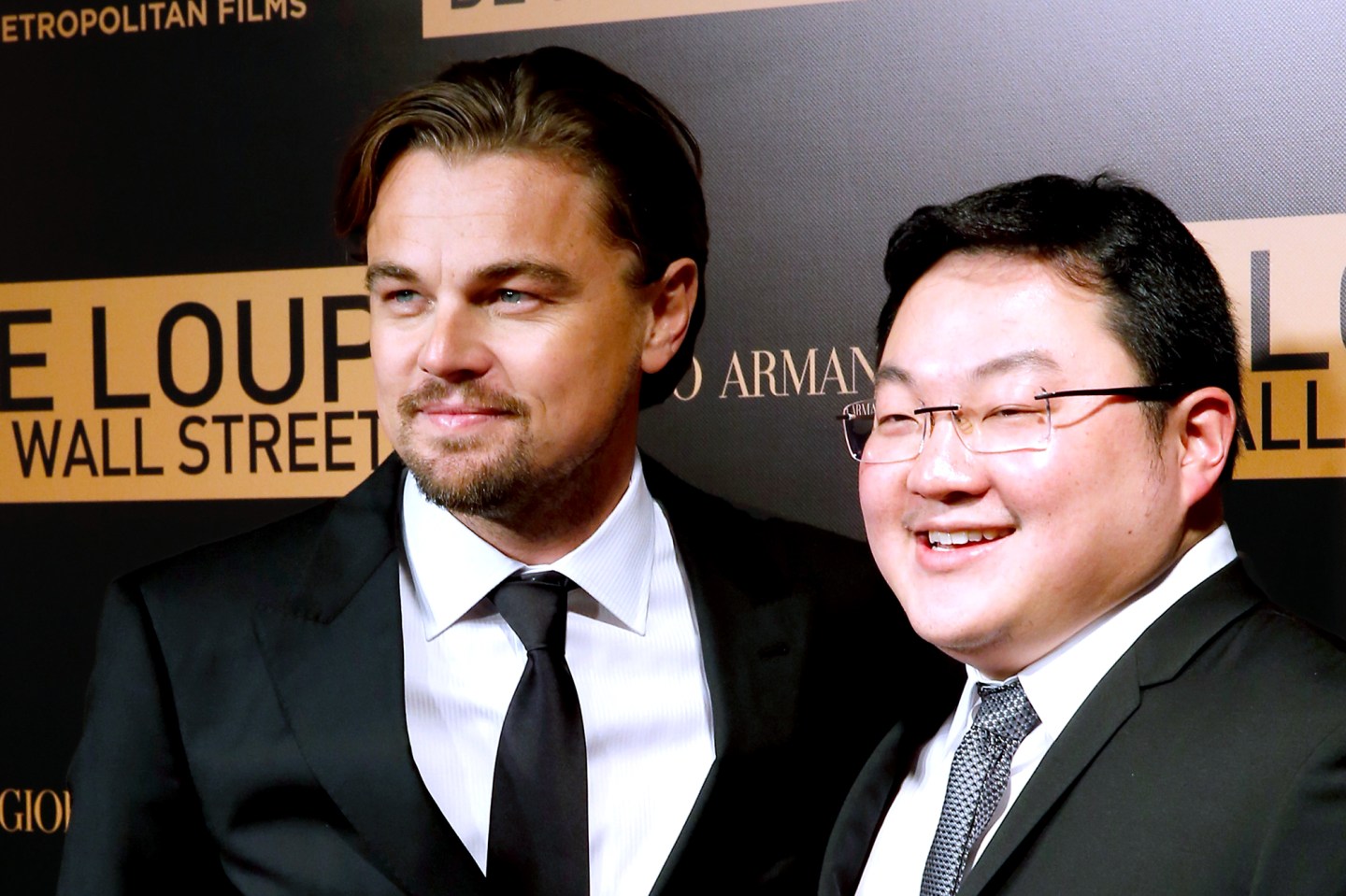 Before he was wanted for his role in 1MDB, Low Taek Jho, more commonly known as Jho Low, led a glamorous life that included paying to party with celebrities like Leonardo DiCaprio and dating supermodel Miranda Kerr.
Bertrand Rindoff Petroff—Getty Images

The 1MDB embezzlement scandal has rocked the business world, and the man believed to be its mastermind is Low Taek Jho, more commonly known as Jho Low.

Malaysian businessman Low fled the country and is now considered a fugitive. The 40-year-old faces charges for money laundering and a litany of other offenses related to the fund prosecutors say he led for many years.

Before he was wanted for his role in 1MDB, Low led a glamorous life that included paying to party with celebrities like Leonardo DiCaprio and dating supermodel Miranda Kerr.

People from his past allege that Low’s questionable behavior dates back to his days as an MBA student at Wharton.

In 1981, Low was born to a moderately wealthy family in Malaysia. His jet-setting father taught him the importance of having the right network at an early age. Like Low, his father also had the habit of flying in models for parties.

Low studied at Wharton, where he threw his first elaborate party and became known as “The Asian Great Gatsby.” For his 20th birthday, he rented out Shampoo, one of the hottest nightclubs in Philadelphia at the time, for $40,000.

Low reportedly sent a note to Ivanka Trump as his partying habits developed, inviting her to a gambling trip to Atlantic City’s Trump Plaza Hotel. He later told his friends that she declined because she didn’t want to set foot in one of her father’s casinos.

Low also developed a crush on Paris Hilton and watched her movie “House of Wax” multiple times, which caused eye rolls from his roommates, according to The New York Post.

After college, he returned home with hopes of working for the network he built at Wharton, helping them with investment deals. While this plan didn’t work out as he had hoped, he was able to connect Malaysian deputy prime minister Najib Razak with Mubadala Development, an investment fund. This connection gave Low status, giving him access to Malaysian banks that lent him billions of dollars.

Three years later, Najib Razak became prime minister, and Low reinvented himself, becoming the alleged mastermind behind offshore financing. He learned how to set up shell companies and moved large sums of money around, according to prosecutors.

As the new prime minister looked for ways to fund his government, Low came up with the idea of creating a sovereign wealth fund, and 1MDB was born. He took control of the fund and siphoned $700 million to himself. This initial amount was nothing compared to the more significant sums that came after, giving him access to unlimited wealth.

Low partied like there was no tomorrow. Expenses for parties went up to six figures as he paid celebrities like Megan Fox, Paris Hilton, and Leonardo DiCaprio to attend, according to the New York Post.

In “Billion Dollar Whale“, a book about Low, the authors write that he spent $85 million on parties between October 2009 and June 2010. Highlights included running up a $160,000 tab at New York City’s The Avenue, and sending 23 bottles of Cristal champagne to Lindsay Lohan’s table at 1Oak.

Still in love with Paris Hilton, Low contacted her manager in 2009 to see if he could pay her to attend his parties. According to the book, she told friends she got paid $100,000 per event. A year later, he rented Paul Allen’s superyacht and spent millions on champagne. These bottles were later poured by Low and his entourage, which now included Hilton.

For her 29th birthday in Las Vegas, Low gave Hilton $250,000 in gambling chips and gifted her a Cartier watch.

Low later financed Red Granite, the film company that produced “The Wolf Of Wall Street.” In 2011, the company introduced itself at the Cannes Film Festival by throwing one of Low’s usual bashes.

Celebrities in attendance included DiCaprio, Bradley Cooper, and Jamie Foxx. Kanye West and Pharell performed for guests. Jordan Belfort, the subject of “The Wolf of Wall Street” and no stranger to fraud, also attended the party. He told his girlfriend that something didn’t look right, Billion Dollar Whale reports.

The jury was also shown a contract for Leonardo DiCaprio that dated back to November 2009.

The actor was flown on an exclusive private jet to attend Low’s birthday party and was paid $150,000 to attend the party, a dinner, and private gambling activities. DiCaprio was one of his closest celebrity friends, and Low even gifted him a $9.2 million Basquiat artwork once.

In July 2012, Low held a yacht party on the French Riviera and ordered for models to be flown in. This deed was written out as “Strategic Escorts LLC.”

Low allegedly threw these parties with help from Goldman Sachs bankers Roger Ng and Tim Leissner. Leissner has pleaded guilty and is currently cooperating with the feds. According to prosecutors, Ng pocketed $35 million from these kickbacks.

Leissner also claimed that in 2017, Low said his lawyers and him were in talks with the Trump administration for a deal that would spare 1MDB from U.S. charges, according to Reuters.

Low also said he talked with Jared Kushner, a senior White House adviser under the Trump administration, to shut down the questions around 1MDB, according to The Guardian.

Someone familiar with Kushner’s schedule has denied these allegations, according to Bloomberg. However, there is still a link between Low and the Trump administration, as Elliot Brody pleaded guilty to lobbying the Trump Administration illegally on behalf of Low.

Mansions, art, and a private jet

Aside from partying, Low also invested in real estate and bought luxury homes in New York, Los Angeles, and London. He also purchased a private plane and spent around $310 million on art, setting a record for paying the highest price for a Basquiat at $48.8 million.

That same year, Malaysian Prime Minister Mahathir Mahamad found evidence of what Low had been doing in 1MDB.

In 2016, Loretta Lynch, a U.S. Attorney, said that the government would seek to recover more than $1 billion of assets bought using proceeds from 1MDB. Low’s jet, mansions, and EMI stake were seized. Granite, the production company, had to pay $60 million.

Some of Low’s friends surrendered their gifts to the government. This included Kerr’s $8 million in jewelry and DiCaprio’s $13 million in art.

Founded in 2009, 1MDB was a state-owned sovereign investment fund co-founded by Najib Razak with the help of financier Jho Low in Malaysia.

The acronym stands for 1Malaysia Development Bhd, and Razak led its advisory board until 2016. It was created to promote development in the country. It planned the new financial district in Kuala Lumpur as one of its first initiatives, and bought privately-owned power plants.

Between 2009 and 2013, the fund raised billions for joint ventures and investment projects. According to the U.S. Department of Justice, most of the money raised was embezzled and diverted to shell companies and offshore bank accounts linked to Low.

In 2018, public anger over the scandal heated up, and voters ousted former Prime Minister Najib Razak. Two years later, Razak, who faced 42 charges of abuse of power, money laundering, criminal breach of trust, and losses, was convicted in the first of many trials.

Goldman Sachs, which was also involved in the scandal, entered its first-ever guilty plea and agreed to pay $5 billion and a $2.9 billion fine in the U.S., according to U.S. News.

Low allegedly led the group of Malaysians who diverted the money invested in the fund into their personal accounts. While he claimed he did consulting work for 1MDB, U.S. prosecutors say he is the mastermind behind creating the shell companies that arranged withdrawals for payoffs and collected proceeds from the fund.

Prosecutors say he funneled $27.3 million from 1MDB to a jeweler in New York for a pink diamond necklace for Razak’s wife, who was first lady at the time.

Although he denies any wrongdoing, he has been charged for money laundering and other offenses in Malaysia and the U.S. Low is now a fugitive.

Today, 1MDB is synonymous with crime and investigations.

Where is Jho Low today?

Regardless of the scandal, some 1MDB projects like the transportation hub and a new financial district plan are still going ahead. However, the fund has been reduced to a shell, and the finance ministry has picked up its assets and debts.

What they find could help close loopholes in the global financial system that assist in corruption.

The Federal Bureau of Investigation has also said that some people have remained silent in fear of retaliation.

The Malaysian government claims Low is now living in Macau, although China denies this. Al Jazeera also reported he’s living in the gambling capital, in a house owned by a senior member of the China Communist Party.