The uncertain future of Starbucks 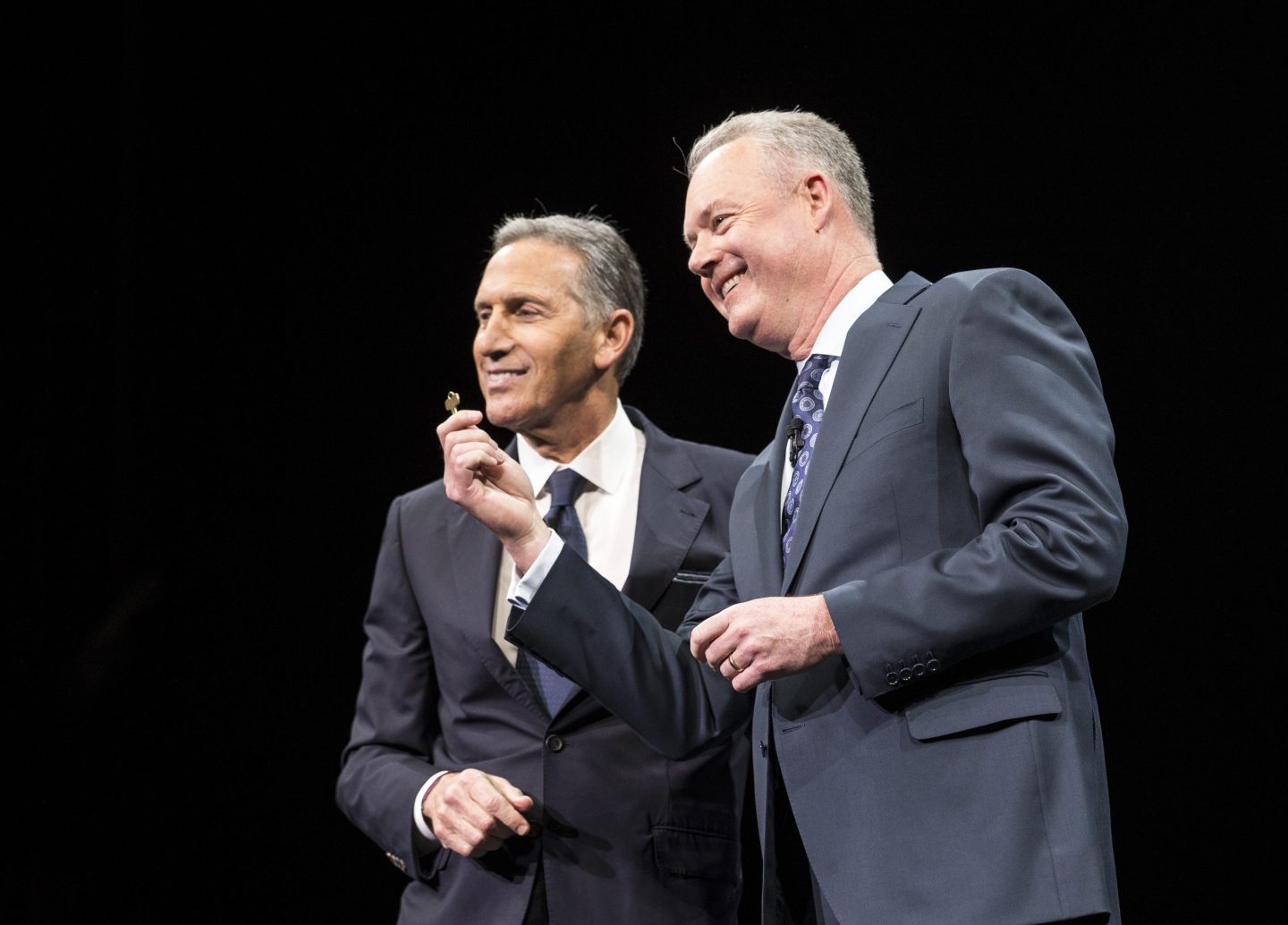 Howard Schultz (left) and Kevin Johnson pose for a photo with a key to the original Starbucks store during the company’s annual shareholders meeting on March 22, 2017, in Seattle.
Stephen Brashear—Getty Images

Starbucks has announced that its CEO, Kevin Johnson, is stepping down to be replaced by former CEO Howard Schultz as interim head of the company.

While Johnson signaled a year ago that he would soon leave his role, he has left Starbucks without a permanent leader in place.

A perfect example of how Starbucks dropped the ball over the past year, and why Schultz may not be the ideal steward, even on a temporary basis, is the company’s ongoing struggle with unionization, with which Schultz has been intimately involved.

Few of us think that any Starbucks location in the United States is unionized. Yet, as of last month, Starbucks has not one but two unionized locations, both stores it owns rather than licenses and both in Buffalo. NPR reports that the Starbucks union push has spread to 54 stores in 19 states.

There is no shortage of issues for a unionized Starbucks workforce to rally around. Employees from multiple Starbucks across the country have taken to social media to protest what they describe as unsafe working conditions owing to the ongoing COVID-19 pandemic. Other key issues for Starbucks employees include benefits and general safety at the workplace.

Ultimately, union formation works best when members have some kind of leverage over the company, such as the know-how of factory workers. The leverage that exists now is the difficulty in finding people willing to work in hospitality. Starbucks isn’t the kind of business that can run without people at the core. Technology can’t replace the work that Starbucks employees do, because the better and more advanced the tech becomes, the more specific a skill set Starbucks employees need to develop to work efficiently with it.

As the Guardian reported in November, Starbucks is very serious when it comes to its anti-union efforts.

A Buffalo barista, Will Westlake, was allegedly forced to attend a mandatory anti-union meeting in November at a hotel near his Starbucks location. There were six members of Starbucks management, and Westlake was the only employee. The entire meeting was dedicated to anti-union pressure, including informing Westlake that he could lose all of his existing benefits if the employees at that branch vote for a union.

“Workers have reported numerous captive audience meetings, one-on-one meetings, store shutdowns, closures, remodelings, and text messages—a mode of contact that was previously used only for emergencies. Dozens of corporate executives have flooded stores with the intent to deter workers from voting to unionize.”

It is unsurprising that this is the strategy Starbucks chose to follow. In early November, former CEO Schultz visited Buffalo to spread the anti-union word to all area Starbucks workers in yet another mandatory meeting.

The end result of that meeting was perfectly conveyed in a tweet from the account that represents Starbucks workers who are seeking to unionize:

As this Starbucks unionization wave heads to places such as Florida, it’s important to keep in mind that when a large company does things that their workers perceive as intimidation, they are crossing into dangerous legal ground.

There’s a lot at stake for a company that isn’t unionized and has long resisted unionization, but the law and the labor board don’t take kindly to tactics that cross the line. Starbucks has been strongly counseled to adopt a neutral policy toward union efforts. They deny using illegal intimidation tactics, including what has been described as overwhelming psychological force.

Starbucks may be realizing that they aren’t dealing with a blip here, but rather a wave. In December, Starbucks promised “good-faith talks” with their first unionized store in Buffalo. Whether the company honors this pledge remains to be seen.

The core issue here is that Starbucks has always seen itself as a great and notably generous employer. The very notion that their workers would, as a group, ask for more, runs counter to their corporate ethos. From the perspective of Starbucks, this is not only hurtful, but the company thinks it knows what’s best for its employees.

This is what Schultz was (awkwardly and badly) trying to convey at the Buffalo meeting, aside from the obvious notion that the company has zero desire to negotiate with a national Starbucks employee union or, even worse, mini unions at each individual store.

So, in an odd twist, brilliant Starbucks senior managers are fighting their employees who seek to unionize, partly because they believe they know better and have a duty to protect these employees from themselves.

This same antiquated perspective—that the way the company has always done things is best—is precisely why, with a year’s notice that its CEO was intent upon leaving, Starbucks has a Band-Aid solution in place rather than a foundation upon which the company can move into a better future.

A Pulitzer Prize–nominated writer, Aron Solomon, JD, is chief legal analyst for Esquire Digital and editor of Today’s Esquire. He has taught entrepreneurship at McGill University and the University of Pennsylvania, and was elected to Fastcase 50, recognizing the top 50 legal innovators in the world. Aron has been featured on CBS News, CNBC, and ESPN, as well as in USA Today, TechCrunch, The Hill, BuzzFeed, Fortune, Venture Beat, the Independent, Fortune China, Yahoo, ABA Journal, Law.com, the Boston Globe, NewsBreak, and many other leading publications.