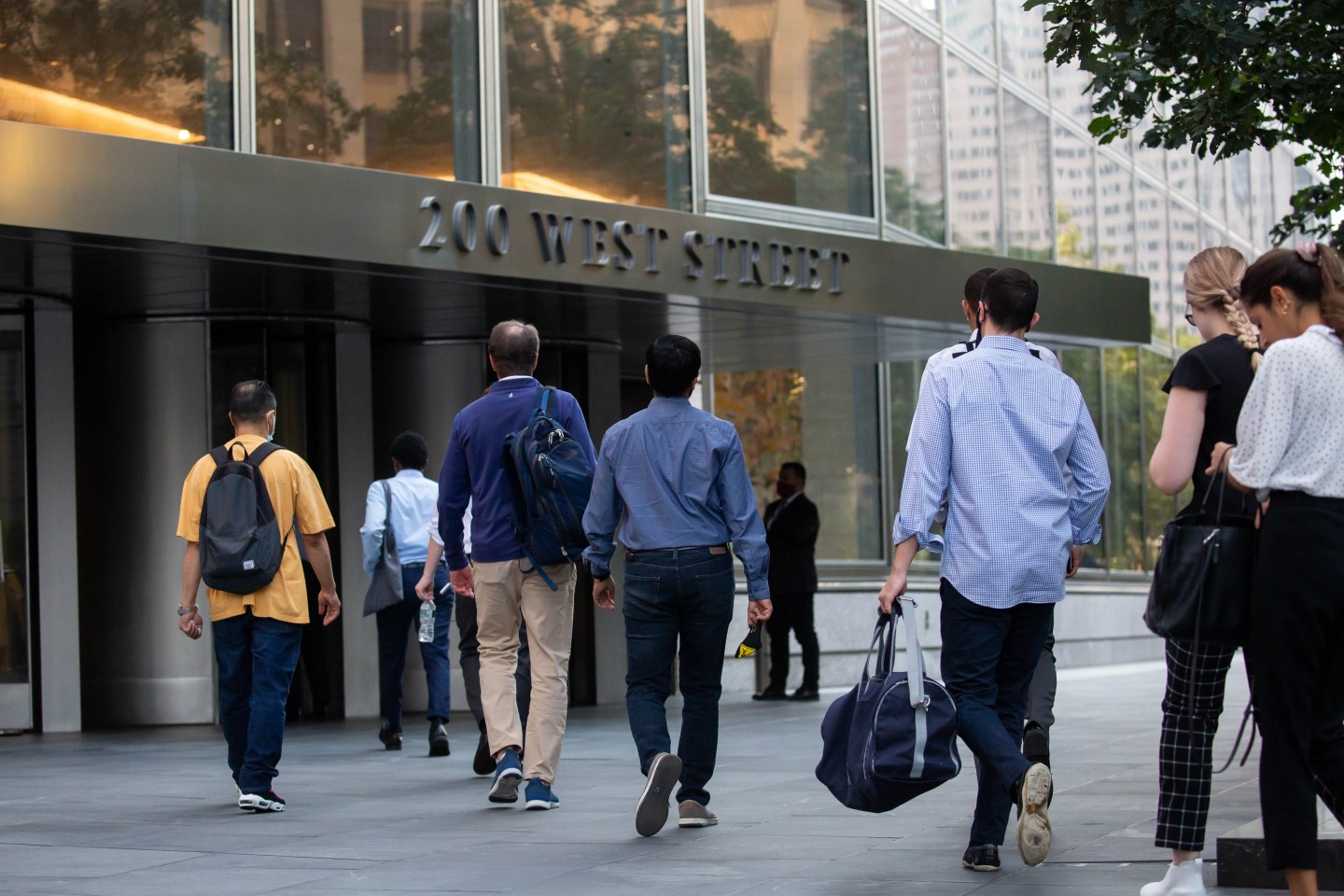 Office workers walk towards the Goldman Sachs Group Inc. headquarters in New York, U.S., on Thursday, July 22, 2021. After a year of Zoom meetings and awkward virtual happy hours, New York's youngest aspiring financiers have returned to the offices of the city's investment banks, where they're making the most of the in-person mentoring and networking they've lacked during the pandemic.
Michael Nagle—Bloomberg via Getty Images

“In GS, the top management says it’s employees choice but internally they track which team has most in office attendance,” reads one message.

The culture clash comes just after reports that banks ramped up bonuses to retain top talent.

Wall Street bonuses averaged around $257,500, 20% more than the previous year, according to the New York Post. Now that things are somewhat returning back to normal, banks want their employees back in the office.

From the beginning of the pandemic, David Solomon, Goldman Sachs CEO has been adamant about eliminating working from home, even calling it an “aberration,” according to Fortune. The company is now pushing employees to come to the office Monday through Friday.

Filled with discontent, some bankers took to anonymous online message board Blind to express discontent.

“In GS, the top management says it’s employees choice but internally they track which team has most in office attendance,” reads one message.

“It’s f**ing bulls**t from top management saying they are people first,” wrote another.

One of the commenters claimed a manager had shown them an Excel sheet that tracked whether departments met their in-office commitments.

However, a person close to the bank refuted these comments.

“Far from a scientific survey, the Post has chosen a handful of comments submitted to an online forum no one has heard of,” the source told Fortune.

Goldman Sachs was ranked No. 1 in people management in its industry in the latest Fortune list of the World’s Most Admired Companies, ahead of JPMorgan Chase, Morgan Stanley, and Bank of America.

Why going into the office is valuable

Although not all workers are happy to go back into the office, for an industry like finance, and a bank like Goldman Sachs, it can be beneficial to have employees in the office.

In a recent interview, David Solomon explained his logic of wanting workers to come back.

“The secret sauce to our organization is, we attract thousands of really extraordinary young people who come to Goldman Sachs to learn to work, to create a network of other extraordinary people, and work very hard to serve our clients,” he said in a recent Fortune article.

“For Goldman Sachs to retain that cultural foundation, we have to bring people together,” he said.

Goldman Sachs has an apprenticeship culture. More than 75% of the workforce are Millennials or Gen-Z, and people in the earlier stages of their career benefit from learning from senior leaders. This is crucial to career development and better relationships can be formed if done in person, according to a previous article in Fortune.

This is not the first time that the bank has had an in-person policy since the pandemic began. In 2021, Goldman Sachs’ summer analysts came to the office in-person for a summer internship.

The bank has also gone to great lengths to prioritize their employees wellbeing and has rolled out a suite of new benefits which include extended bereavement leave, a new miscarriage leave policy, increased retirement contributions for employees, and a sabbatical for long-tenured employees, according to the Wall Street Journal.

The path back into the office hasn’t been easy

Solomon’s quest to get workers back into the office has been a long road.

Employees were initially asked to return in June, but after the outbreak of Omicron in December 2021, the bank sent employees back home. Then, earlier this year, the bank called employees back in.

While some like Solomon see the positives in coming back into the office 5-0, some have gotten used to the flexibility of hybrid work and are therefore looking to switch to other industries.

On Blind, some bankers have shared they’ve started interviewing at other companies that offer more flexibility, like Facebook, Amazon, Alphabet, Netflix, and Google.