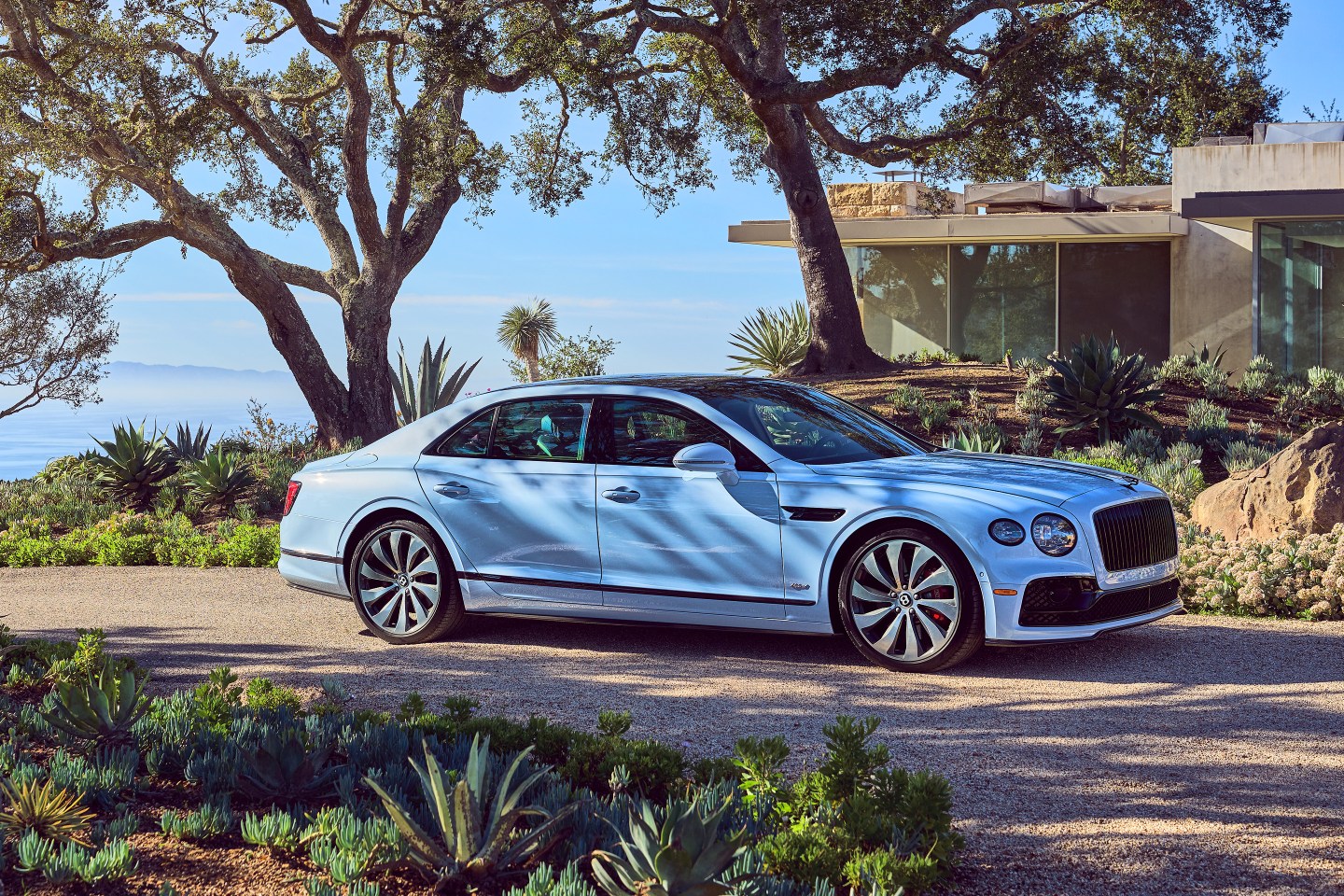 The $4 million Bugatti Chiron Super Sport is a supercar whose every exterior detail is designed to project its power—from the low-slung, long-tailed silhouette that appears to be in motion even when standing still, to the slanted LED headlights that give it the aggressive mug of a bird of prey. It rockets from zero to 60 mph in just over two seconds, and the 1,577-horsepower “ultimate grand tourer” coupe version is capable of hitting 304 mph.

But the car is also Bugatti’s swan song for the high-octane age, its final pure internal combustion vehicle. Bugatti will make only about 80 of the grand tourers before consigning its hand-built 8.0-liter, 16-cylinder engine to history. The engine is the largest of any production car—four times the size of most engines on the road. “It will most likely remain the fastest car with a full combustion engine,” says COO Cedric Davy. “There will never be anything else like it again.”

For makers of hypercars and other high-performance, ultra-luxury vehicles, 2022 marks the end of an era. The battle to build the biggest, boldest engines is giving way to a fevered race to electrify. No longer will the superlative sports car announce itself with a heart-pounding thrum, nor leave a plume of pollution in its wake. The coveted cars of tomorrow will approach in silence, leaving behind nary a carbon footprint.

This ultra-luxury auto segment, where models sell for $250,000 or more, is admittedly tiny. But the category’s high visibility and exacting standards for design and performance make these rarefied brands particularly influential in the broader industry. Though they’re slightly late to the game, the fact that they’re transitioning to battery-electric powertrains shows just how thoroughly electrification is becoming the new normal.

A V-6 engine and an electric powertrain make Bentley’s Flying Spur both smooth and fast.
Courtesy of Bentley

Some of the most hallowed names in automaking—brands like Lamborghini, McLaren, Aston Martin, Bentley, and Rolls-Royce that built their reputations on speed and power—have pledged to go all-electric by 2030. To ease their customers into the electric era, several are beginning the transition with plug-in hybrids that travel a short distance on electricity before drawing power from the gas engine.

But it may not be such a hard sell. As owners of Teslas and other mass-market EVs can attest, electric motors can outstrip gas burners when it comes to torque and acceleration. The lack of engine rumble and visceral experience may make EVs appear to be slower, but their smooth glide belies their power. “The performance that an electric car can give you is unmatched by the internal combustion engine, if you really get it right,” says Lamborghini CEO Stephan Winkelmann. And for ultra-luxury sedans and SUVs, the configuration of batteries allows for larger cabins, while routing more power to support onboard accessories like larger touch screens or more devices—so manufacturers can get the pampering right too.

Bigger economic forces, of course, are driving these changes. The entire industry is headed toward electrification, with carmakers planning to invest $330 billion in EV development through 2025. Climate consciousness is a factor, as is customer demand. “The young generation is not even sitting at our table anymore if we don’t promise sustainability,” Winkelmann says.

Lamborghini CEO Stephan Winkelmann with the Huracán, Urus, and Aventador, all of which will be electrified by 2030.
Courtesy of Automobili Lamborghini S.P.A.

As with most carmakers in the segment, Winkelmann adds, the average age of Lamborghini’s customer is dropping rapidly, possibly due to the rise of new crypto and Instagram-influencer fortunes. Bentley Motors reported that more than 60% of its customers said in 2021 that they would drive an electrified vehicle, more than twice as many as in the year prior.

Both Lamborghini and Bentley are part of Volkswagen Group, and they benefit from that company’s $100 billion investment in electrification. Next year, Lamborghini will launch its first plug-in hybrid, followed by hybrid powertrains for its Huracán sports car and Urus SUV. The brand’s first full EV, most likely a four-seat coupe, is slated to arrive by 2028, with a battery-electric Urus expected to follow. Lest drivers forget they’re driving a car known for raw power, the brand is developing a V-12 engine to support its hybrid powertrain. “There must be a DNA which is recognizable as Lamborghini,” Winkelmann says.

Bentley, meanwhile, is already embedded in the hybrid market. The British brand launched a $213,000 hybrid version of its Flying Spur sedan earlier this year; it plans to hybridize its entire portfolio by 2024 and launch its first EV the following year. The plug-in Flying Spur retains the nameplate’s performance—it can travel from zero to 60 in four seconds, with a top speed of 177 mph. It also boasts luxuries such as plush head pillows, massaging seats of hand-tooled leather, a huge touch screen for climate and audio controls, and sleek wood veneers.

The Flying Spur exemplifies the ultra-luxury electric strategy, focusing not only on power but on a whisper-quiet passenger experience. “When you think hybrid, it shouldn’t feel like a Prius, it should feel like a Bentley,” says Peter Bosch, the Bentley Motors board member responsible for manufacturing.

Rolls-Royce, owned by BMW Group, isn’t asking its customers to think hybrid at all: It’s going straight to an all-electric platform that will underpin all of its cars by 2030. It will launch its first EV, the Spectre coupe, late next year—priced somewhere north of $400,000, in line with the rest of Rolls-Royce’s model lineup.

Founder Charles Rolls, who was experimenting with EVs as early as 1900, proclaimed them clean, quiet, and devoid of smell or vibration, but lamented that charging technology was still “many years” away. A century-plus later, charging infrastructure remains a hurdle. But for buyers of ultra-luxury cars, executives say, range anxiety is not a key consideration. They’re more likely to take their showpiece vehicles for a short spin around town or, more rarely, on the track.

The value proposition for Bentley or Rolls-Royce customers is upgraded styling, cabin comfort, and higher horsepower, even if they never exploit the engine’s potential. “You’re not looking to pull a lot of lateral G’s in your Bentley,” says John Loehr, a managing director in the automotive and industrial practice at consulting firm AlixPartners.

Put two cars on the line, and the EV is going to win any drag race, and it’s not even going to be close.

John Loehr, a managing director in the automotive and industrial practice at consulting firm AlixPartners

Still, for those who want to floor the gas pedal, several production EVs have set speed records that handily surpass most combustion engines. In 2019, a Porsche Taycan sedan set a lap record for production EVs on the 13-mile course at Germany’s famed Nürburgring, finishing in seven minutes and 42 seconds. Last year, a Tesla Model S Plaid completed the circuit seven seconds quicker. “Put two cars on the line, and the EV is going to win any drag race, and it’s not even going to be close,” says Loehr.

Even Bugatti’s next car will likely be a hybrid. Sold by Volkswagen Group to EV maker Rimac Automobili last year, Bugatti is preparing to capitalize on the Croatian startup’s expertise in electrification. A joint venture with Porsche will combine Rimac’s technology and Bugatti’s “savoir faire” to produce battery-powered Bugattis, says Davy, the COO. But for now, he adds, he and his colleagues are still savoring the roar of that gas-powered Chiron: “We are going out with a bang.”

This article appears in the April/May 2022 issue of Fortune with the headline, “Supercars go electric.”