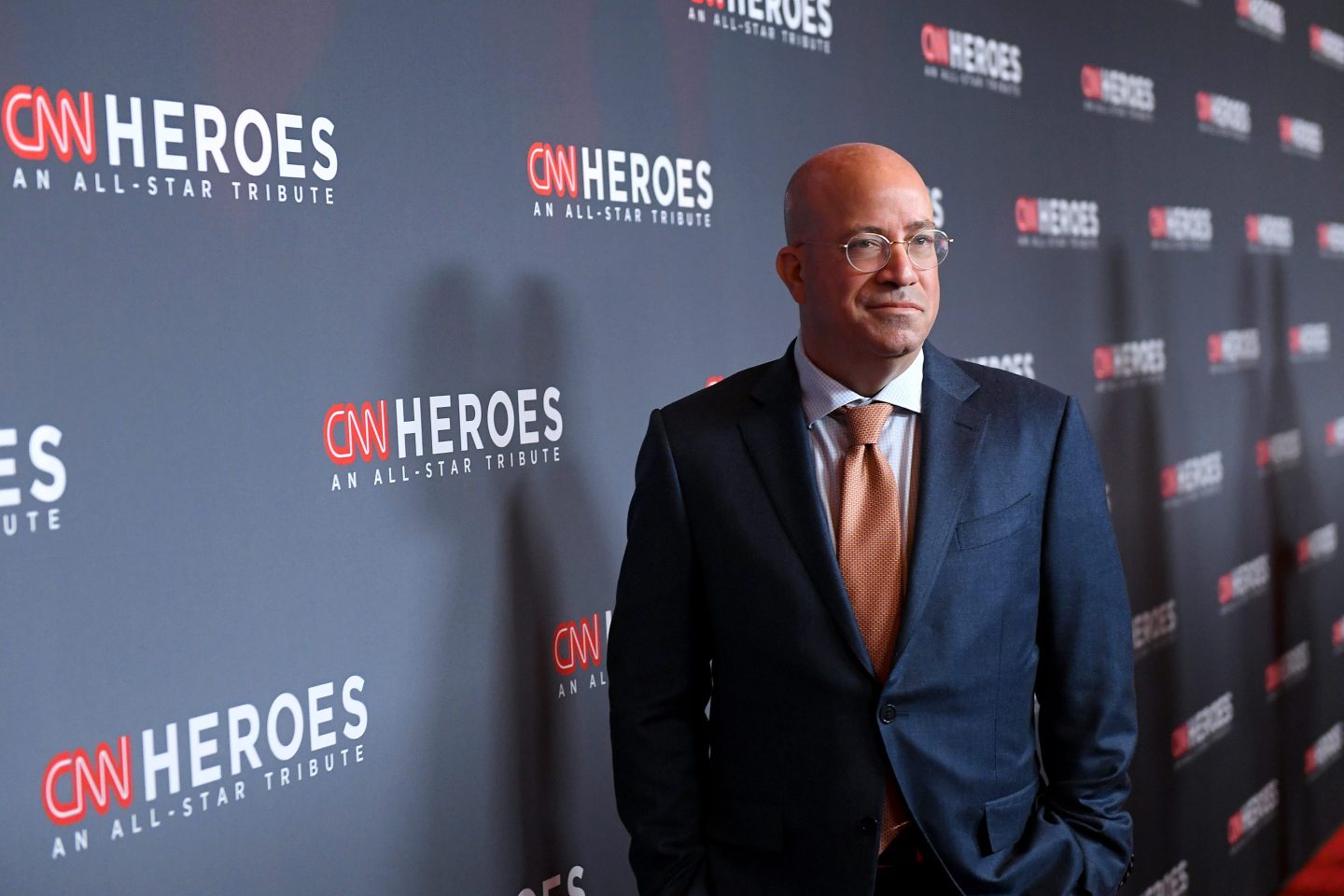 Former CNN chief Jeff Zucker in a 2019 photo. WarnerMedia’s firing of Zucker “is dreadful for CNN’s morale, its viewers’ trust, and the nation’s continuity of journalism at a time of historic constitutional threats,” the authors write.
Mike Coppola—Getty Images/WarnerMedia

In the movie Casablanca, when Captain Renault closes Rick’s Café under the pretext of illegal gambling, he exclaims, “I am shocked, shocked to find that gambling is going on in here” in faux outrage—then collects the winnings from his own bets moments later.

Ever since news broke of Jeff Zucker’s surprising, forced resignation at CNN, we have been flooded with messages from contacts at CNN and media circles expressing genuine outrage at the faux outrage from executives at WarnerMedia, CNN’s parent company. WarnerMedia leaders expressed that shock after they supposedly “discovered” the relationship between Zucker and longtime CNN marketing executive Allison Gollust, which led to Zucker’s ignominious exit. Executive departures are often clouded by shadowy corporate politics and hidden agendas—but there are too many explanations from WarnerMedia brass in this instance that are just too patently unbelievable by any stretch of the imagination, to the detriment of everyone involved, most of all CNN.

The CNN leadership turmoil over the personal relationship between two top executives raises important questions regarding regulating romance at work (just in time for Valentine’s Day). However, WarnerMedia’s handling of the situation is dreadful for CNN’s morale, its viewers’ trust, and the nation’s continuity of journalism at a time of historic constitutional threats. This is about far more than vague guidelines regarding the common pairing of work colleagues.

Speaking at an internal CNN staff meeting on Wednesday, WarnerMedia CEO Jason Kilar claimed that he was “not aware of the relationship” until it emerged as a result of legal challenges from Chris Cuomo, the star anchor whom CNN fired for advising his brother, then Gov. Andrew Cuomo, on how to deal with sexual harassment allegations. Despite the twists and turns of a complex relationship, much of which played out in public, Kilar claimed that past tensions between himself and Zucker did not play a role, saying that he was only focused “on the values that we stand for as a company.”

Really? Such a suspect explanation strains credulity, since it is so far removed from anything even remotely close to the complete, unvarnished truth. We have always celebrated courageous CEOs who do the right thing and who stand for moral courage, and condemned CEOs who have abused their positions of trust, responsibility, and authority. But despite WarnerMedia’s efforts to fill the former role while casting Zucker into the latter role, this is simply not such a case. As we have written about with Joanne Lipman, this is hardly a classic #MeToo case of a villainous male executive egregiously preying on subordinates. The relationship between Zucker and Gollust was as public a secret as there is. Indeed, the loudest voices in defense of Zucker immediately emerged from—guess where—the ranks of CNN, with on-air talent as well as behind-the-scenes staff expressing bewilderment.

Highly respected host Alisyn Camerota called Zucker’s forced departure an “incredible loss,” explaining on air that “these are two consenting adults who are both executives. That they can’t have a private relationship feels wrong. I feel it deeply, personally, but I speak for all of us and our colleagues.” Amidst reports that Zucker was given no notice and that his request to stay for a short period to ensure a smooth transition was explicitly denied, chief political correspondent Dana Bash raised the question of whether “the punishment fits the crime. CNN’s lead Washington anchor, Jake Tapper, contended that “an outside observer might say, ‘Well, it looks like the bad guy succeeded.’ He threatened Jeff. How do we get past that perception that this is the bad guy winning?”

This is not to say that Zucker is blameless. Why one of media’s savviest executives would commit the unforced error of not revealing a relationship with a coworker—even one between two consenting, divorced adults—remains an unresolved question, especially since Gollust was removed from Zucker’s direct supervision around the start of the pandemic at, ironically enough, the direction of senior WarnerMedia executives. The company policy at CNN does not seem clear about whether such relationships are allowable when they are not between direct reports, but even so, a possible violation did not require termination.

But the efforts of those same executives to now stake out the moral high ground ring hollow and insincere, and are so patently unbelievable as to be embarrassing, regardless of what Zucker should or should not have done. The thorny issues around regulating workplace romances implicated here remain ambiguous, and companies have never quite figured out how to deal with these cases, as we’ve already highlighted with Lipman.

But using “company values” as the smoke screen to carry out palace intrigue obscures the genuine unresolved paradoxes while setting back real progress on these important issues, to everybody’s detriment. If Kilar were serious about standing for company values, perhaps he would look to bona fide solutions such as enhancing clarity around his company’s policies on workplace romances and ensuring more equal application of the rules across ranks and status—both of which have been historically overlooked. Instead he seems to have considered his job done, declaring the internal investigation “complete” without any follow-up efforts to tackle the genuine root issues.

Obviously, as with most of these cases, there are many forces at play, many strong personalities involved, and many old scores to settle. Sure, Cuomo’s lawyers may be playing hardball. The capable John Stankey, AT&T’s CEO, certainly feels shareholder pressure to complete his company’s WarnerMedia divestiture and merger as soon as possible. Very importantly, Discovery’s largest shareholder, the highly respected John Malone, has long had a specific vision for CNN in alignment with Ted Turner’s original mission of ensuring that the “news is the star” and has been critical of overtly opinionated evening show hosts.

Skeptical observers might argue that once Cuomo’s legal bulldogs brought the relationship to the attention of WarnerMedia brass, it would have been impossible to get the toothpaste back in the tube—but no, this was not a tragedy in which the script was already written. There were numerous instances of what can only generously be considered missteps, if not more intentionally malicious perversions of fairness, committed by WarnerMedia leadership in their odd haste to push Zucker out the door before they depart themselves.

First, Discovery CEO David Zaslav, in line to oversee CNN once the deal closes, says that both he and Malone had nothing to do with the decision, and that he only learned of Zucker’s resignation just before it happened, when it was already fait accompli. While Discovery must legally remain at arm’s length until at least the deal receives government approval, it is hard to justify a scenario where Zucker’s presumptive boss-in-waiting is deprived of at least some formal input into such a crucial decision, regardless of everything else at play, and even if some on the Discovery side may have been less than devastated at the outcome. Such shootings at sunset reek of ulterior motives and hidden vendettas.

Second, despite rumors of rumblings from certain Discovery shareholders, it is hard to seriously envision a scenario in which having Zucker stay on, to provide continuity at the minimum, while CNN finishes a more extensive and thorough investigation, would endanger the all-important impending merger, especially if Zucker would have expressed contrition publicly. The likelihood of 51% of shareholders flipping against a broadly popular, $43 billion mega-merger on this basis seems far-fetched. What’s more, high-level media couples have long been common at the Washington Post, Dow Jones/the Wall Street Journal, NBC, and elsewhere.

Some might argue that Zucker would still have needed to depart eventually no matter what—but given Kilar’s somewhat compromised position as an exiting executive, and his apparent lack of credibility within the ranks of CNN, the question remains of whether he was the right person to make this call without any official input from Discovery. Even the slightest perception of self-interested bias seriously undermines leadership authority as well as external business relationships, which is why it is unsurprising that, as CNN’s Brian Stelter reported, there is a sense within CNN that “Jason took down the best boss I ever had”—even if this may not be entirely correct or justified.

As one prominent CEO with no direct ties to CNN confided to us, echoing many similar messages, he found the whole situation “pretty repulsive all around…This was an old-fashioned corporate assassination, led by Kilar, fearing a loss of power, fueled by Chris Cuomo and his legal team’s take-no-prisoners and have-no-loyalty ethos.”

Ultimately, the biggest loser in all this is not Jeff Zucker, nor is it Jason Kilar. The way this has all been handled leaves CNN worse off in every way at a particularly perilous time. CNN recently crossed the $1 billion profit threshold while simultaneously investing unprecedented resources in their new CNN+ streaming platform, with stars such as Chris Wallace, Kasie Hunt, and Scott Galloway leaving cushy gigs because they believed in Zucker’s vision. But these distractions risk diverting CNN from its long-term growth strategy just as the impending merger is sure to create some ripples.

Furthermore, as CNN’s Stelter pointed out, there is some irony that while any of Zucker’s detractors within CNN were always well outnumbered by his loyalists, his forced resignation has martyred him across the entirety of CNN’s ranks. There’s now a general sense that Zucker has long run protective corporate cover so that his staff could focus on journalism uncovering the truth, unencumbered by political considerations both internally and externally. Worried employees are concerned not only about the apparent double standard—with staff accused of far more egregious actions given second chances by discretion, while the core issues remain unsolved—but just as importantly, whether CNN will be able to continue to fulfill its critical mission of putting “Facts First,” with threats to democracy escalating by the day.

Even Zucker’s replacements admit they are still in shock, processing his sudden exit. But in truth, this was more than a shock—this was an avoidable and disappointing tragedy for all involved. Perhaps they will realize this under Zaslav, and reengage Zucker in two months as they did when they reinstated the scandalized CNN legal correspondent Jeffrey Toobin. Sacrificing Jeff Zucker did nobody any favors—least of all CNN.

Jeffrey Sonnenfeld is a senior associate dean and the Lester Crown Professor of Management Practice at the Yale School of Management and author of Firing Back: How Great Leaders Rebound After Career Disasters (Harvard Business Review Press). Follow him on Twitter.