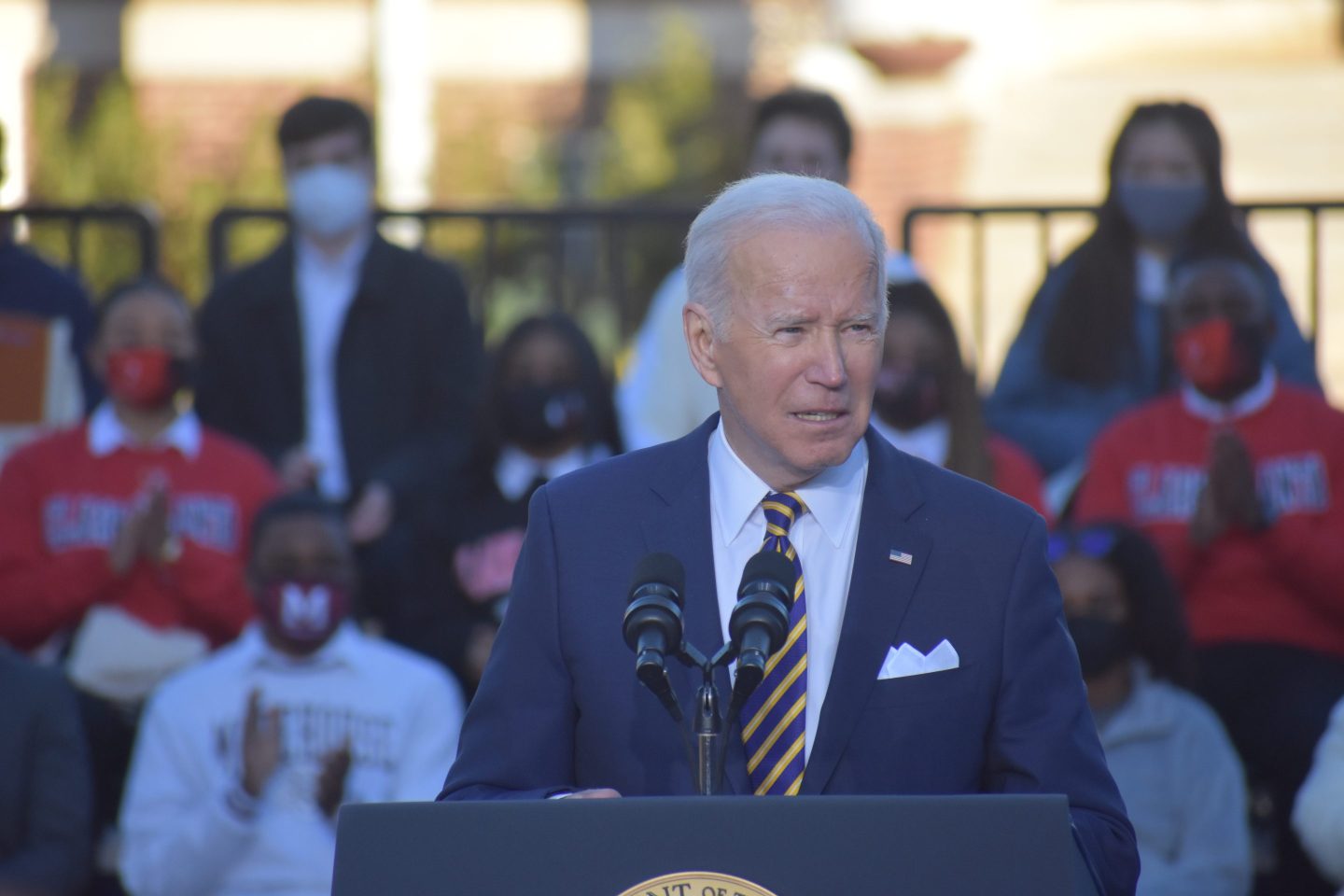 President Joe Biden spoke about the urgent need to pass legislation to protect voting rights during a speech in Atlanta on Jan. 11.
Kyle Mazza—Getty Images

Trust in democracy is a cornerstone of the U.S. economy—and no one understands this more than business owners and leaders.

When it became clear in November of 2020 that then-President Donald Trump was taking steps to overturn the election, the Business Roundtable—made up of CEOs of leading U.S. companies—issued an unprecedented statement formally congratulating Joe Biden and declaring that the election was conducted with integrity.

As Trump’s efforts persisted, the business community continued to be a critical voice in endorsing the legitimacy of the electoral results and condemning the Jan. 6 insurrection that followed. Unfortunately, trust in our democracy and electoral system is still under attack a year after that tragic day. Business leaders are rightly concerned—and their help is needed again.

A majority of Americans say the Capitol riots changed the way they think about democratic government, according to an Axios survey, and 64% believe democracy is in crisis, according to an NPR poll. Recently, Morning Consult released a new survey of more than 400 leaders and executives of America’s largest businesses that shows the business community remains deeply concerned by the state of American democracy. It found that 77% are worried about the state of U.S. democracy and believe capitalism in the U.S. is dependent on a well-functioning democracy.

Why are they so concerned? Continued misinformation spread by media outlets, lawmakers, and Trump himself is still fostering the belief that the 2020 election was stolen. Today, 32% of Americans believe Biden’s victory was the result of voter fraud.

Opportunistic elected officials are capitalizing on this disinformation by introducing more than 200 bills enabling state legislatures to politicize, criminalize, or interfere with elections. In Georgia, the General Assembly passed a law allowing its legislature-appointed State Election Board to replace officials from county election boards. That board has since taken steps that could lead to the replacement of the Fulton County election board—in one of Georgia’s most populous and culturally diverse counties—where Trump made unfounded allegations of fraud.

These types of policy changes can have disastrous consequences on our economy as we head into the 2024 election. What if one presidential candidate loses the electoral vote by the margin of a few states, and newly empowered legislatures claim fraud and alter the electoral count vote to their liking? Either the House and Senate accept that altered count and we no longer have a democratically elected government, or it does not and our country is thrown into chaos and instability.

Unstable, populist governments are generally not considered safe global investments, as they are more likely to be hostile to globalization and to interfere in free markets. The low risk in investing in the U.S. has allowed us to borrow money at low interest rates from creditors around the world, finance significant investments in infrastructure, and provide low-interest loans to businesses. If that is jeopardized, the downstream effects could be disastrous for business owners and individual Americans, driving up interest rates, and making it significantly harder for businesses of all sizes to start and grow.

To counteract this crucial threat, our organizations are working to activate business leaders to ensure that we never see another attack like that on Jan. 6 and that Americans’ faith in our system can be restored. Fortunately, there are legislative opportunities at the federal level that a majority of business leaders support, according to the Morning Consult data.

The Freedom to Vote Act—a bill that is coauthored and cosponsored by Sen. Joe Manchin—would address voter registration and voting access, election integrity and security, redistricting, and campaign finance.

The John Lewis Voting Rights Advancement Act would reinstate U.S. Department of Justice preclearance of changes in state voting laws (which was reauthorized on a bipartisan basis by Congress five times between 1970 and 2006) to ensure that local authorities do not pass discriminatory restrictions on voting. It is critical that advocates and policymakers work with the business community to advance solutions that stabilize our democracy.

America cannot be a credible, powerful, economically vibrant nation if the violence and misinformation of 2020 become the new norm for American elections. Business owners and leaders have a unique understanding of the benefits of a stable economy and a well-functioning democracy, and the inextricable correlation between the two. They should use their power and influence to help uphold it.

Daniella Ballou-Aares is CEO of the Leadership Now Project. Rhett Buttle is the founder of Public Private Strategies and senior adviser to Small Business for America’s Future. David Clunie is executive director of the Black Economic Alliance.