A.I. could make your company more productive—but not if it makes your people less happy 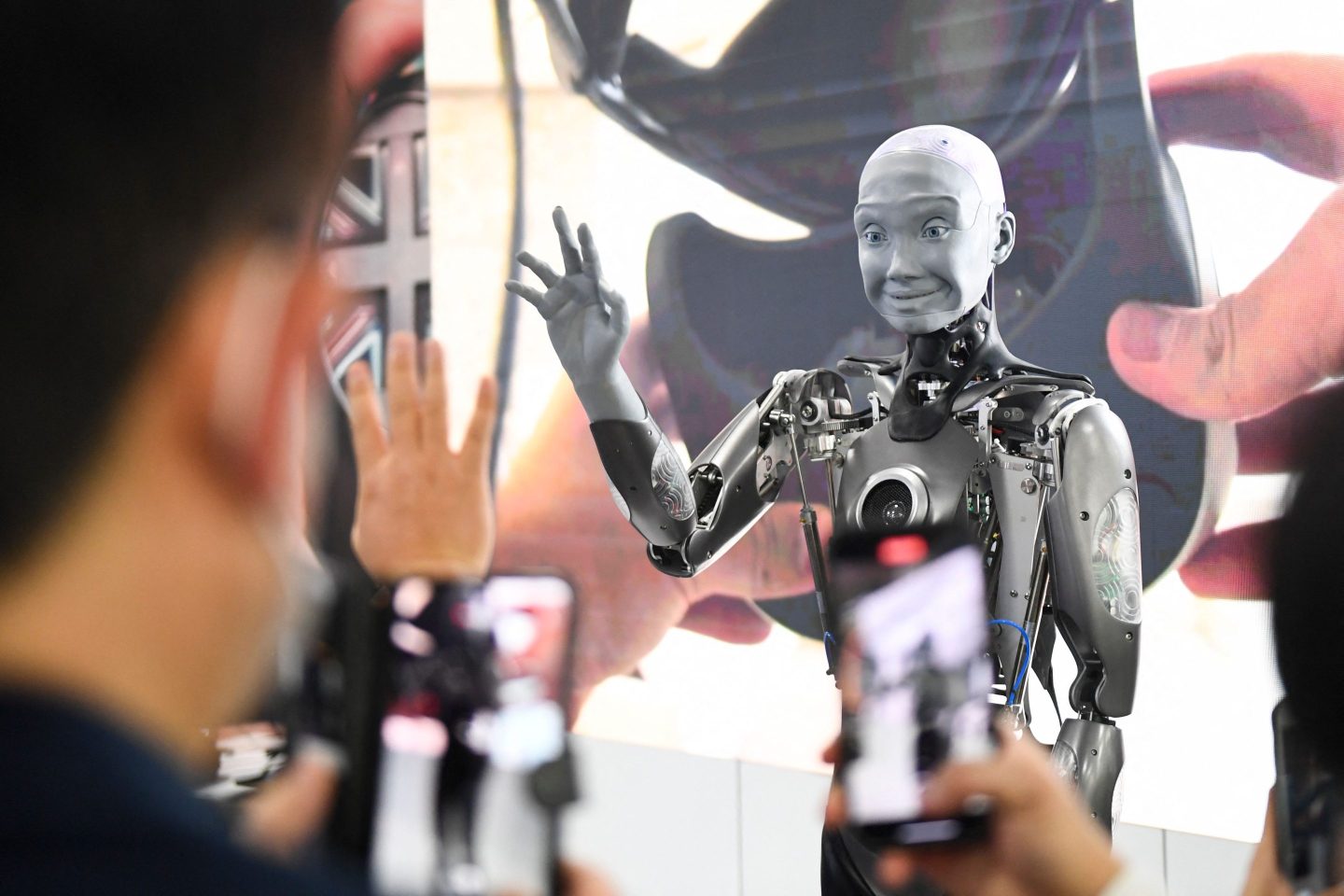 Attendees interact with the Engineered Arts Ameca humanoid robot during the Consumer Electronics Show (CES) on Jan. 5, 2022, in Las Vegas. “Companies should ensure that the productivity of both humans and A.I. rises as they work together, and that they bring out the best in each other,” the authors write.
Patrick T. Fallon—AFP/Getty Images

Artificial intelligence is all about productivity, right? A.I.-based software programs, such as Hubstaff, record keyboard strokes, mouse movements, and the websites employees visit when they work. Time Doctor uses webcams to shoot videos and pictures of users’ screens at periodic intervals to check whether employees are at their computers. Isaak monitors employee interactions, combining its data with personnel records to identify the employees that are most collaborative. And Enaible measures the time employees take to complete tasks, suggests ways they can speed up, and assigns productivity scores. Managers can use the grades to identify employees who are worth retaining—and those who aren’t.

Whatever you may privately feel about the technology, A.I. is here to stay. But have business leaders developed the right attitude to productivity in the A.I. Age?

Machine productivity, measured by the quantitative output produced every minute, hour, or day, can be mechanically monitored and managed. But we humans aren’t exactly machines. Science shows that we work best when we mix work with breaks, and that we’re most motivated when we enjoy ownership and independence. These “human” factors demand a nuanced perspective on productivity that digital technologies may not yet possess. Still, shunning the technology isn’t the answer; used in the right way, A.I. can benefit both employees and businesses, as a recent BCG–MIT research project has shown. The key is for companies to ensure that the productivity of both humans and A.I. rises as they work together, and that they bring out the best in each other.

Sadly, companies, especially those that have started using A.I. in the workplace, tend to focus only on the technology and almost forget about the human aspects while trying to optimize productivity. CEOs, we believe, must tackle four challenges to get the most out of combining employees and A.I.

Companies can use digital technologies to collect data on (almost) everything that their employees do. Doing so usually leads to executives micromanaging employees so much that the process often borders on the invasion of their privacy. Besides, using A.I. to ensure that people are working every second will increase the productivity only of those who need constant supervision. It will never inspire creativity and innovation—the capabilities that differentiate humans from machines.

One antidote may be to use A.I. for employee self-development rather than monitoring them. Microsoft’s Viva Insights, for instance, is an A.I.-powered platform that gathers data on parameters such as the time employees spend checking email and interacting with colleagues, and alerting them when they need to take breaks. One feature, Reflection, privately tells employees how they’ve been feeling; another, Send Praise, makes it easy to express appreciation to coworkers; and Virtual Commute reminds employees when they should start wrapping up as the day ends. Viva brings insights and communications to where employees work, changing the nature of education into a real-time process.

Managers can only track aggregate figures such as the percentage of employees who spent over a third of their time in long meetings (over an hour) and large meetings (over eight people); those with less than 20 hours of focus time a week; and people who spend less than an hour a week in one-on-one sessions with managers. Thus, Viva helps managers coach employees, a focus that makes the latter more open to using the A.I.-based software.

Relationships at work increase employee motivation, well-being, and productivity. According to a recent Gallup study, people who have at least one close friend at work are seven times as likely to be engaged, produce higher quality work, and enjoy greater well-being than those who have none. Still, as employees learn to work with A.I., they will spend less time with coworkers. For instance, autonomous factories will require employees to work in isolation for prolonged periods; A.I. could replace interactions between team leaders and members; and algorithms may even execute layoff decisions—as apparently already happens in Amazon’s warehouses.

That’s why companies must take care to create episodes of employee interdependence and moments of interaction. For instance, Humanyze, a people analytics firm, found while working with a U.S. bank that those of its call centers whose employees had frequent social interactions reported higher productivity and greater retention. It therefore suggested that the bank synchronize the breaks in all the call centers to create more opportunities for interaction. One year after the bank did so, its call centers reported a 23% increase in productivity and a 28% increase in retention.

As the use of automation increases, employees will often have to take on residual tasks that can be physically or mentally demanding. Some Amazon workers complain that they have to stand in one spot for hours, picking up objects from conveyor belts and placing them on shelves; grabbing is tough for the robots in the warehouse. The task is, evidently, punishing; between 2017 and 2019, Amazon’s warehouses reported 8.9 injuries per 100 employees—40% of which were related to repetitive motions—which is over three times as high as the U.S. average of 2.8 injuries per 100 employees. Similarly, when A.I. in call centers takes care of simple problems—“I forgot my login”—employees are left to deal with back-to-back calls from the most unhappy and angriest customers. That adds more stress to demanding and underpaying jobs.

Relying on employees to only do what machines can’t is neither productive nor sustainable; employee turnover will inevitably increase. Moreover, business will find it difficult to fill those bad jobs and expensive to constantly train new people for them. Companies should therefore keep both eyes focused on the human dimension as they deploy A.I. Amazon itself has doubled down on workplace wellness, launching a fresh initiative as part of a $300 million safety program it kicked off in 2019. There’s room for improvement, but injury rates in Amazon’s warehouses did fall last year.

As A.I. becomes better, companies run the risk of becoming overly dependent on the technology. One of our clients found that the accuracy of its algorithm’s predictions was apparently close to 100%, but its data scientists pointed out that it was unlikely; the accuracy could be around 85% at most. An investigation revealed that employees were assuming that the A.I.’s predictions were correct without even checking if they were. Such overreliance can cause problems both when the algorithm doesn’t work and, worse, when no one realizes that it isn’t accurate.

To avoid depending too much on A.I., companies should train employees to manually execute business processes even if they’ve been automated. It’s no different from training pilots, who must know how to take off, fly, and land a plane in case its autopilot system fails. Algorithms may be sophisticated, but it’s still necessary to build human oversight into the critical parts of business processes. And organizations should create systems so that employees can raise red flags about A.I. without worrying that they will be punished in case they’ve erred.

As A.I.’s use in business becomes more prevalent, CEOs must shift their attention in the year ahead to ensure that both the technology and their people deliver better results—A.I. + Human productivity, as the equation goes. Leaders should focus on their people, motivate them, facilitate their development—and inspire them, so they stay involved and innovative. A.I. may be a powerful technology, but nothing will get better by simply adding A.I. to anything.

Su Min Ha is a project leader at BCG and ambassador at the BCG Henderson Institute.

Colleen McDonald is a principal at BCG and ambassador at the BCG Henderson Institute.