General Electric has tried everything, except investing in American workers 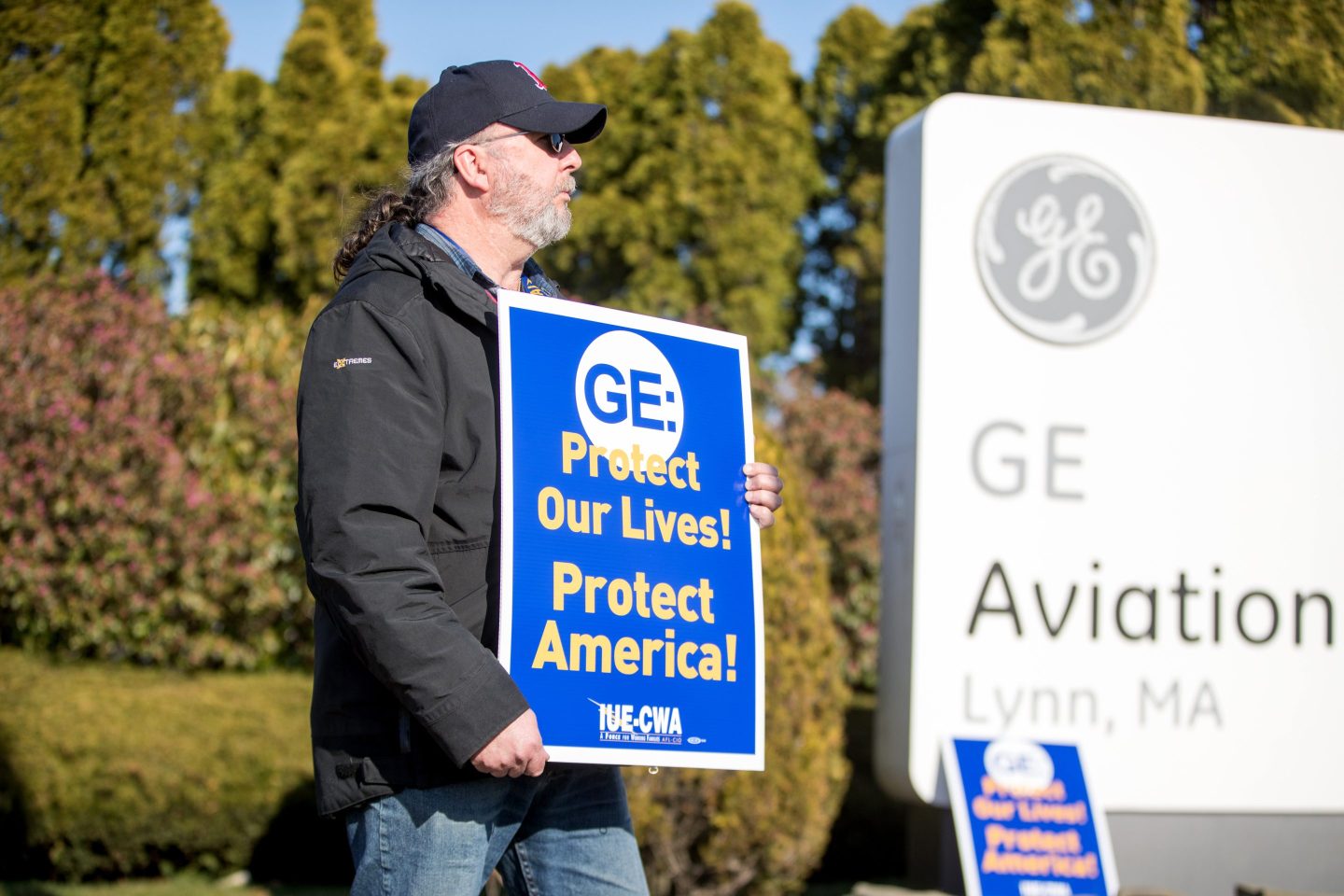 A worker holds a sign during a demonstration outside the GE Aviation facility in Lynn, Mass., after the company announced job cuts in 2020. Some 1,200 workers now remain employed by GE in the facility where skilled machinists and techs build components and engines for the U.S. military.
Bloomberg—Getty Images

General Electric recently announced that the conglomerate will divide itself into three separate companies in the course of the next three years. CEO Larry Culp stated that “each can benefit from greater focus, tailored capital allocation, and strategic flexibility to drive long-term growth and value for customers, investors, and employees.”

Unfortunately, Culp has always been focused primarily on managing investor expectations, including for the predatory hedge fund run by billionaire Nelson Peltz, Trian, which has had an excessive influence on the strategic direction of the company since 2015, despite holding a minority of the stock.

Trian has stated that they “enthusiastically support” GE’s so-called transformation, and Peltz himself has described CEO Culp as a “star” who “knows how to run a business.” But it seems like Culp and Trian Partners may just be looking for the next big payday for themselves, and not looking out for the future of American manufacturing or GE’s long-term interest. They are certainly not looking out for their employees and the communities that depend on GE jobs: Culp and Trian will likely be long gone before the destructive effects of their proposed restructuring are fully felt.

As the largest representative of GE workers in the United States, we’ve seen this before.

In 1989, GE employed 277,000 workers in the U.S. In 2019, that number was only 70,000. Years of offshoring jobs and abandoning workers and communities have left GE’s domestic manufacturing footprint a shell of what it once was.

With its decision to split, GE stands at a crossroads. Does the 129-year-old institution want to continue its 40-year track record of disinvesting, de-unionizing, and offshoring its U.S. manufacturing operations? Will GE continue putting our planet and national security at risk or will it choose to be part of a historic rebuilding of America?

GE Renewable Energy launched with a federal grant in Schenectady, N.Y., in 2011, but it is now headquartered overseas. Revenue from GE’s renewable energy products was up 34% in 2020, yet jobs are being moved to China, Poland, and Germany. GE power generation and renewables work has also been moved to India and Vietnam. We have watched in frustration as GE shipped product lines and jobs overseas, despite good faith efforts by the union to work with the company to ensure a profitable future in the new green economy.

GE remains one of the largest defense contractors in the world. Last year, the company received over $4 billion in defense revenue from the U.S. government, dollars not invested in U.S. workers, communities, or facilities. It received $20 million from the Pentagon in 2020 as part of a program to aid military contractors who lost business due to the COVID-19 pandemic. GE Aviation got $75 million through the federal CARES Act in June 2020. In January, the company won a $20 million grant from the federal Department of Defense to develop high-tech wind turbine generators.

As a recent report from the University of Massachusetts, Boston, and Cornell University documents, GE has benefited mightily from taxpayer bailouts and government contracts, yet it has continued to move jobs, shutter plants, break promises to retirees, downsize domestic manufacturing, and implement other cuts that have irreparably harmed American workers. The company has slashed its U.S. workforce by 47% in just the past three years.

In Lynn, Mass., where skilled machinists and techs build components and engines for the U.S. military, there were once nearly 13,000 unionized hourly workers. Today there are merely 1,200. In Schenectady, where Edison founded GE in 1892, there are fewer than 800 unionized workers, down from a high of 30,000, as product lines have been sent overseas or outsourced to nonunion shops. A GE plant in Salem, Va., that once employed 3,000 skilled workers, was whittled down to just 260 until it was closed altogether in 2019, devastating this once-thriving community.

Rather than innovate and invest here in America, GE and its suppliers have closed plants in recent years in Virginia, Ohio, Georgia, Arkansas, South Dakota, and Texas, decimating blue-collar communities and leaving loyal employees scrambling for survival.

GE’s business model has become over-reliant on offshoring, making supply chains more fragile for products that are critical for our country’s power supply and defense. If GE wants to help build America back better and maximize revenue from the clean energy boom, the company must modernize and reinvest in its historic domestic manufacturing sites.

Whether GE ultimately continues as one company or three, it needs to stop offshoring. Anything less is a betrayal of workers and will deal a ruinous blow to communities that are fighting harder than ever to survive.

Chris Shelton is president of the Communications Workers of America.