Despite their gloomy mood, consumers are surprisingly strong 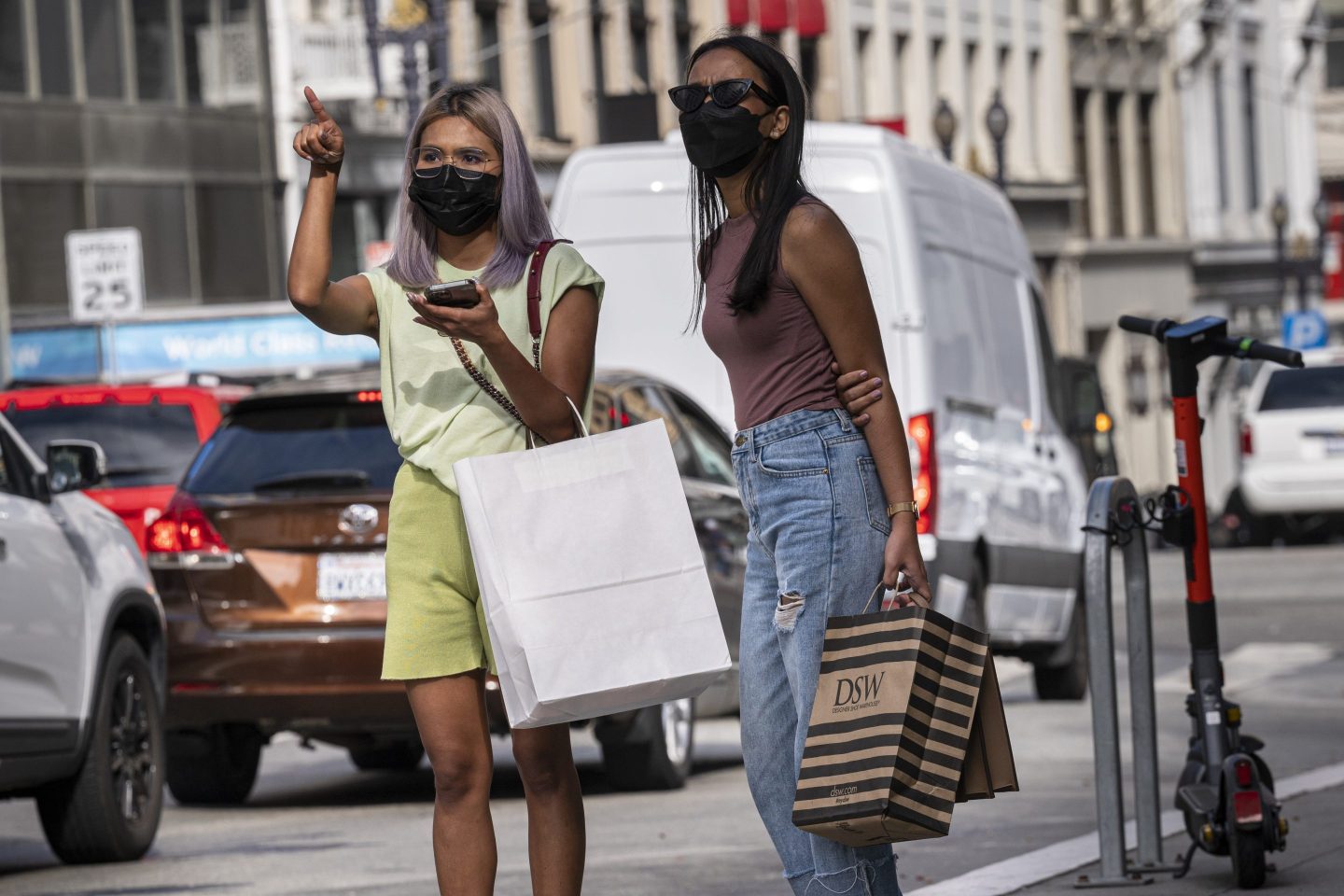 Surprisingly, 2021 is ending with an abundance of gloom. In November, a prominent survey of consumer confidence was lower than it was at the depths of the COVID crisis in 2020; indeed, there were even times during the Global Financial Crisis that also had better confidence data. Weakening sentiment shows up in other gauges too. If we were to assess the economy on grump alone, one could think we’re in recessionary territory.

The economy cannot be blamed for the pervasive pessimism. The recovery is beating expectations for a second year in a row, with output easily above pre-pandemic levels. The rebound is also decidedly broad-based. For all the talk of a “K-shaped” recovery, this one has reached much broader segments of society than was the case post-2008.

To explain the extra unhappiness, then, two main suspects require closer inspection: current-year inflation and the growing sense of a forever pandemic. While each has the potential to sustain perceptions of economic malaise, neither is likely to undermine the ongoing expansion in 2022. That makes it likely that consumer spending will stay high—despite exceptional levels of grump.

This year again, the U.S. economy is comfortably outperforming expectations. The unemployment rate was expected to be 5% in 2022, but is already down to 4.2%. Year-over-year GDP growth is likely to come in at 5.5%—compared to a median forecast of 3.9% at the start of the year, as compiled by Bloomberg. This year’s strength follows the outperforming recovery of 2020, when the onset of the pandemic triggered universal gloom that obscured the arrival of a vigorous V-shaped recovery.

Growth rates aside, today U.S. output is above pre-pandemic levels and—barring another recessionary shock—stands a good chance of overshooting its pre-pandemic trend, meaning that output is likely to be higher in the future than was expected before the COVID crisis struck.

Households, meanwhile, have not been left out of this recovery. Cash balances are more than $2 trillion higher than pre-pandemic, and net wealth of households has risen by more than 20%.

A commonly cited narrative for the disconnect between economic performance and popular sentiment is the idea that this recovery is uneven, leaving behind large parts of the population. Yet, the much-invoked narrative of a K-shaped recovery, where some rise but many lose, does not hold up that well. While economic hardship continues for many, and the struggles are far from over, it would be wrong to think the recovery has benefited only small segments of the population.

Yes, the top 20% of the income distribution grew their net wealth particularly strongly (by more than $17 trillion), but the bottom 20% also grew their wealth—by over $300 billion. That stands in stark contrast to the post-2008 recovery, when many years after the financial crisis, that lower income cohort was still struggling with shrinking net wealth. So, while inequality likely went up during the pandemic, the whole distribution has received a net wealth lift.

The middle of the income distribution is also noteworthy. Their asset base—particularly exposed to housing values—got hit hard after 2008 and then made a painfully slow recovery (although they didn’t endure as long a slump as those at the bottom). No such collapse happened during COVID—quite the reverse is true, as rising real estate values lifted housing wealth for owners quite significantly.

The top of the distribution, whose net worth is far more exposed to equities and business ownership, had a far less difficult time recovering after 2008 and recovered in next to no time in 2020. Their wealth rebounded the fastest and gained the most. While each recovery exacerbated wealth inequality, rising inequality when the bottom is falling is quite different from rising inequality when the bottom is also gaining strongly.

Neither is it true that households’ economic situation is driven only by stimulus and is thus a one-off that will dissipate. The labor market, the main source of income for nearly everyone, is booming. Unemployment has fallen so rapidly that the economy is now on the verge of “tightness”—a labor market so competitive that workers see meaningful wage gains. After the 2008 recession, it took over 90 months for unemployment to fall below a level considered to be a tight labor market—this time the economy is there after just 18 months.

What’s more, the market is particularly tight at the low end of the wage spectrum where less educated and lower-skilled workers are seeing faster wage gains than higher educated and higher-skilled workers—a very rare occurrence. And this dynamic may persist as job openings, which remain near record highs and dramatically higher than pre-pandemic, are particularly extreme in sectors such as hospitality.

Why are people so grumpy then?

It might be argued that GDP growth rates and the distribution of net worth are fairly technical and not tactile to the general public. But “help wanted“ signs are tactile, as are stock prices, and rising wages.

Of note, the disconnect is not merely between economic performance and consumer sentiment. It is also between consumer sentiment and consumer spending. Retail and food services sales are in a post-pandemic overshoot, nominally running nearly $100 billion above their monthly 2019 pace in 2021—which is 13% higher in real terms. With savings, balance sheets, and labor markets where they are, that spending is very likely to persist rather than collapse in line with what sentiment reports could have us believe.

So, if the strength of the economy can be felt, and money is being spent, we need to look for other drivers to explain extra grump. Two shapers of gloomy economic perceptions stand out: current inflation and the feeling of a forever pandemic. Each of these are real dampers today, but there are good reasons to believe they may ease, if not completely, in 2022.

First, inflation is running at a pace not seen in a generation. And while price growth hasn’t infected the full range of goods and services, it is true that household incomes are getting squeezed in areas where prices are up strongly—such as at the gas pump or in car sales. Additionally, household perceptions may be influenced by a heated public debate and press coverage that has relentlessly covered price spikes.

However, household expectations of inflation have not inflected to expect permanently higher price growth. Expectations are up significantly on the one-year horizon, but five-year expectations have moved only modestly. In other words, households do not currently think inflation is structural or permanent.

There are some good reasons to believe that’s true, no matter the frenzied tone in headlines. Inflation is being driven by the shock from a demand overshoot linked to the strong recovery and compounded by the bottlenecks that have arisen in product and labor markets. This shock inflation is not—at this point—self-sustaining and is likely to slow significantly in 2022. That said, even as price growth moderates, the tight labor market that a strong recovery delivered will persist, meaning wage gains are likely to remain robust. 2022 is likely the year when strong nominal wage gains translate into respectable real wage gains.

Will that change consumer sentiment? Not necessarily. Often forgotten, inflation is a concept that captures the rate of change—not the price levels that impact consumer sentiment. To illustrate, consider gas prices. For their contribution to inflation to moderate, they simply have to stop rising—they do not need to fall for inflation to fall. Yet, as long as price levels remind people each week of price pain, that has the power to sustain their grump. Note that it wasn’t until late 2014 and early 2015, when gas prices fell sharply, that the post-GFC cycle saw a boom in consumers‘ expectations.

The second factor is pandemic fatigue. The uncertainty and instability of living in the COVID economy is unquestionably a downer—just ask yourself. Wondering when school will close or if your travel plans will need to be scrapped, or simply having to take another COVID test, contributes to a dark cloud over many households.

However, the recurrent fears of a repeat of the economic chaos of early 2020 are misplaced. The linkage between the virus and the economy has largely decoupled as (most) economies have learned to live with community spread rather than impose sustained and broad lockdowns. Such decoupling has been true and proven through many recent waves—the resurging virus shifts out growth, rather than breaking an ongoing economic expansion. There is always residual risk of a game-changing mutation, but 2022 may well be the year when new variants are taken with an economic shrug rather than economic terror.

Not too grumpy to spend

While we cannot account fully for the disconnect between consumer sentiment and consumers’ spending, that disconnect itself gives some reason for cheer about 2022. Consumers have chosen to continue to drive economic growth despite their grump, and as some of the reasons for grumpiness may fade, retail sales may be more robust—delivering an even stronger economy in 2022.