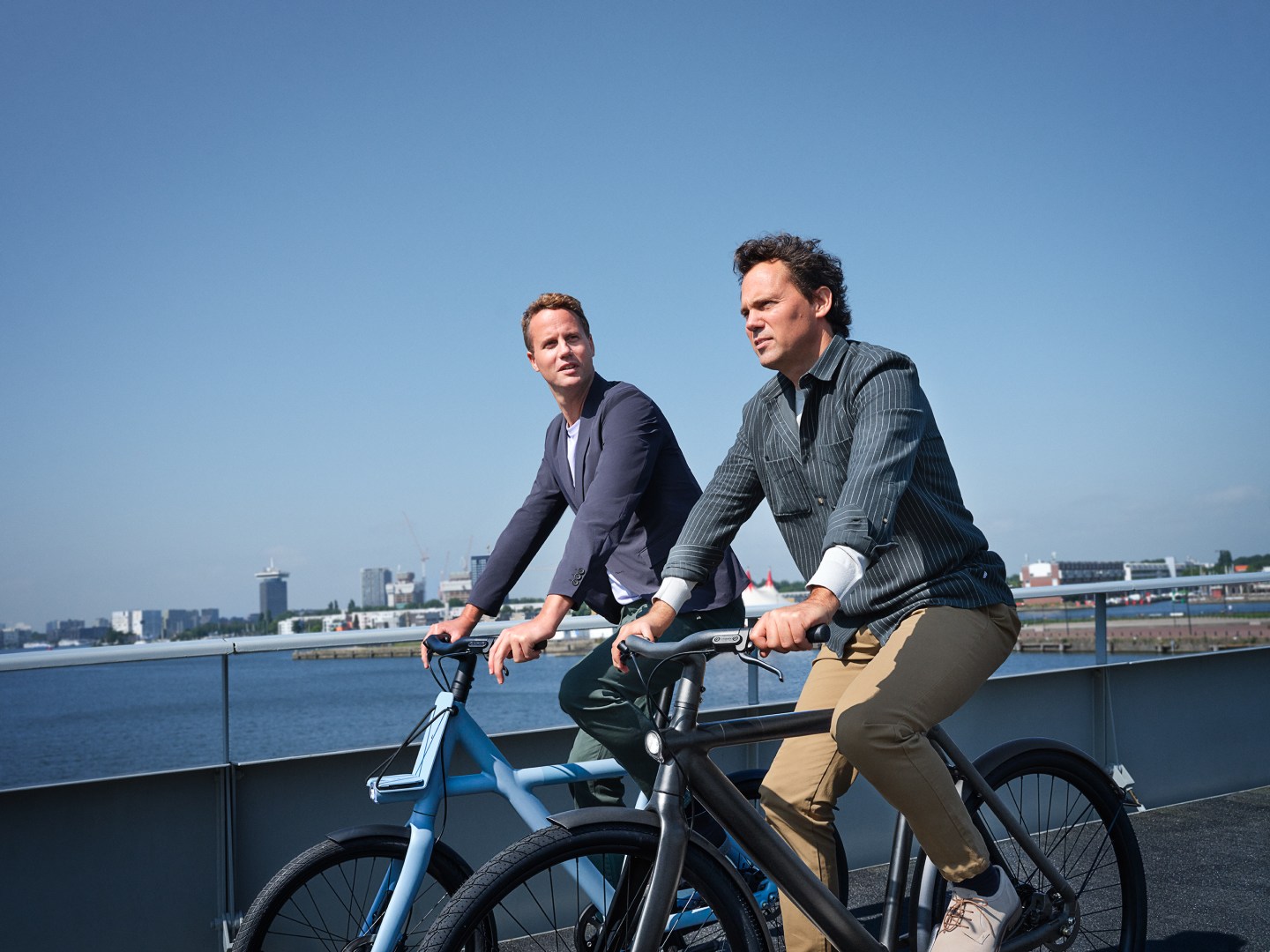 VanMoof co-founders Ties and Taco riding in Amsterdam on one of their e-bikes.
Courtesy of VanMoof

Ties Carlier is still getting re-acquainted with Amsterdam bike paths as he leads Fortune on a test ride of VanMoof’s S3 e-bike. He’s spent years away as an expat in Taiwan, but of course, this being bike riding, things are coming back to the Dutchman quickly on this tour of city’s hip Noord area. He easily navigates the bike lanes that take him back to the company’s nearby spanking new home office and shows off the bike’s features to his guest.

But one thing that has struck Carlier, back in the Netherlands temporarily from his base in Taipei where he oversees the company’s R&D facility, is how many VanMoofs there are now on the road in the Dutch capital. It’s a success he and his brother, Taco, with whom he runs and co-founded the e-bike maker in 2009, are working to replicate in key global cities like New York, Paris, Berlin and Tokyo, backed by some heavy hitting venture capitalists. They and their investors see gold in a cultural shift in how people commute that reflects growing concerns about congestion and pollution, and the big strides cities that have long catered to cars, are making building up bike-friendly infrastructure.

“This is just the beginning of the revolution, and I believe in 10 to 20 years, we will see just as many bikes on the streets of New York, San Francisco, Paris, London and Tokyo as we do in Amsterdam,” Taco tells Fortune.

VanMoof is betting e-bikes will be a big chunk of that bicycle boom. After slow burning growth for years, e-bikes have undeniably gone mainstream. Globally, the market is estimated to be about $25 billion, with projections for double that by the end of the decade. In the Netherlands, they represent 50% of all new bike sales. And in the still small U.S. market, the mother lode for VanMoof and its many competitors, NPD Group said e-bike sales had more than doubled to $681 million in the first four months of 2021. At VanMoof, global sales tripled in 2020 though the company won’t say to what level.

Those prospects have attracted a ton of venture capital to the sector. VanMoof in August raised $128 million, following a $40 million round a year earlier with backers drawn to VanMoof’s sleek design and anti-theft technology. In a display of how this has become an arms race, its rival Rad Power raised $304 million in two rounds this year. In fact, VCs have pumped $3.2 billion into e-bike companies since the start of 2017, according to PitchBook.

The COVID-19 pandemic got more people on bikes, electric or traditional, for fun. It also made many realize they could be viable way to commute as an alternative to crowded public transit or cars. “What we’re seeing is that people are buying e-bikes as an automobile alternative, rather than a bicycle alternative,” says Matt Powell, a senior industry advisor at NPD Group.

The sweet spot for VanMoof, Ties says, is people who live between three and nine miles (5-15km) from their office. That distance is short enough to bike rather than go by car or public transit, but long enough to make someone using a regular bike sweaty, especially in the summers of a city like New York.

VanMoof, whose name is a play on the English word “move” but actually rhymes with ‘loaf’ when pronounced in Dutch, says it has so far sold 200,000 e-bikes since 2016, when it pivoted from traditional bikes. The entrepreneur brothers see the potential for 10 million of its bikes on the roads of Europe, the U.S., and Japan within a few years as it rides a boom. Its bikes cost $2,300 in the U.S., pricier than a typical road bike but certainly much less than a car.

“That’s why you need an e-bike, it’s faster, it’s more fun, and it’s more affordable,” says Ties. The trick for them of course is getting consumers to choose a VanMoof.

The Carlier brothers, who both studied industrial design at Delft University of Technology in South Holland, say they got the idea for VanMoof on a trip to New York City well before they founded the company. They marveled at how biking was the best way to visit New York, yet so few people were doing it at a time the city’s bike infrastructure was still modest. “We were amazed that it was so perfect, but how few people were actually riding,” says Taco, who at 43 is a year older than his brother. They correctly predicted cities like New York and Paris would eventually build up many more bike lanes and start to tame well ingrained car cultures.

They were hardly the only ones to see the opportunity. Today, the challengers are countless: everyone from traditional bike makers like Trek and Giant to motorcycle maker Harley Davidson to fellow upstarts like RadPower are also looking for a piece of the e-bike pie.

While VanMoof bikes are instantly recognizable for their sleekness with clean lines, some of those features were the result of design rather than aesthetics. For instance, the headlight being built directly into the crossbar is to avoid having cables stick out and get snagged in a busy parking space for bikes, like those in Amsterdam, Ties says.

Where VanMoof is trying to standout from the busy pack is as a maker of e-bikes that are also smart. One of its distinguishing features is its anti-theft technology that can be managed from a smartphone app and allows the user to locate the bike via GPS if it’s stolen and get one of VanMoof’s “Bike Hunters” on the case to work in key cities with local cops to retrieve it. A user can remotely set off an alarm and get the headlight blinking remotely. The bike is unusable if not turned on via its app. VanMoof, which will replace a stolen bike if it can’t get it back within two weeks for customers who bought a protection program, says 95% of bikes stolen in Europe are recovered. In North America, though, the rate is lower given some police departments’ limited enthusiasm for chasing bike thieves.

When asked what makes VanMoof different from rivals, Ties is quick to say that it’s having control over components and parts, with manufacturers making them specifically for VanMoof and making sure it is all compatible with VanMoof tech, similarly to how Apple operates.

“We believe that’s the best way to create a seamless integration between hardware and software, we copied it from Apple,” says Taco.

The Carlier brothers feel controlling the supply chain with their own made-for-VanMoof components is essential for quality control, compared to relying on a million different suppliers also working with rivals. It’s key for things like having sensors that track the bike’s health to ensure predictive maintenance, or in simpler terms, seeing problems in a bike when they are still small. Of course, more control has a flipside: It has to get its own supply chain nailed down since substitutes for key parts aren’t easily available. And VanMoof hasn’t been spared from having the long current backlogs that have beset most bike makers: a U.S. consumer ordering a VanMoof X3 bike today won’t get it until mid-winter. (The S3 is available within two weeks.)

The big funding round VanMoof won in August will primarily go to research & development, the brothers say. And that includes finding more efficient ways to make the bikes in greater numbers. Here again, they find inspiration from Silicon Valley pioneers. “Elon Musk always says, almost every interview he says the real innovation is in production,” says Ties. (Silicon Valley is turning out to be also be a source of business for VanMoof: a number of Big Tech companies it won’t identify are providing its bikes to workers as a perk.)

The money will also go to helping VanMoof set up more service centers in key markets, crucial given that it has decided to largely avoid selling via bike stores and sell directly to consumers. VanMoof has decided to focus on a few key gateway global cities and build a beachhead that way, rather than trying to have a physical presence in a large number of cities.

Taco says that to complement its own support centers, VanMoof has created a network of bike experts in different markets who can help customers with their bikes. (VanMoof has also had to contend with a problem of bikes arriving at customers’ homes with nicks and dents, showing some of the limits of direct-to-consumer retail.)

NPD’s Powell agrees with that strategy. “There’s a serious service component that comes with these bikes,” Powell says. “There’s going to have to be some infrastructure out there.”

And building that infrastructure is all the more essential given that rivals are building up their own networks through their own stores or with partners: Bird, Super73, and Swft are among the e-bike makers Best Buy has begun to sell at a few stores ahead of likely expansion, and the retailer’s Geek Squad can be hired to assemble and set up bikes for a $99.99 fee, to cite only one example.

While their to-do list is long, the Carlier brothers remain buoyed by what they see as growing demand from people in major hubs for better bike infrastructure, with most of that growth set to come from e-bikes. New York recently opened a new bike lane on its iconic Brooklyn Bridge; Paris has miraculously become quite bike friendly with 1 million Parisians riding a bike every day as part of a commute, and Amsterdam is expanding many bike lanes to accommodate all the bicycle traffic that increasingly includes e-bikes that young customers like.

“Now, two months after I came back, I see all of Amsterdam on electric bikes, and people are often in their 20s, and that’s the best and coolest shift,” he says as we head off for another jaunt around the city.