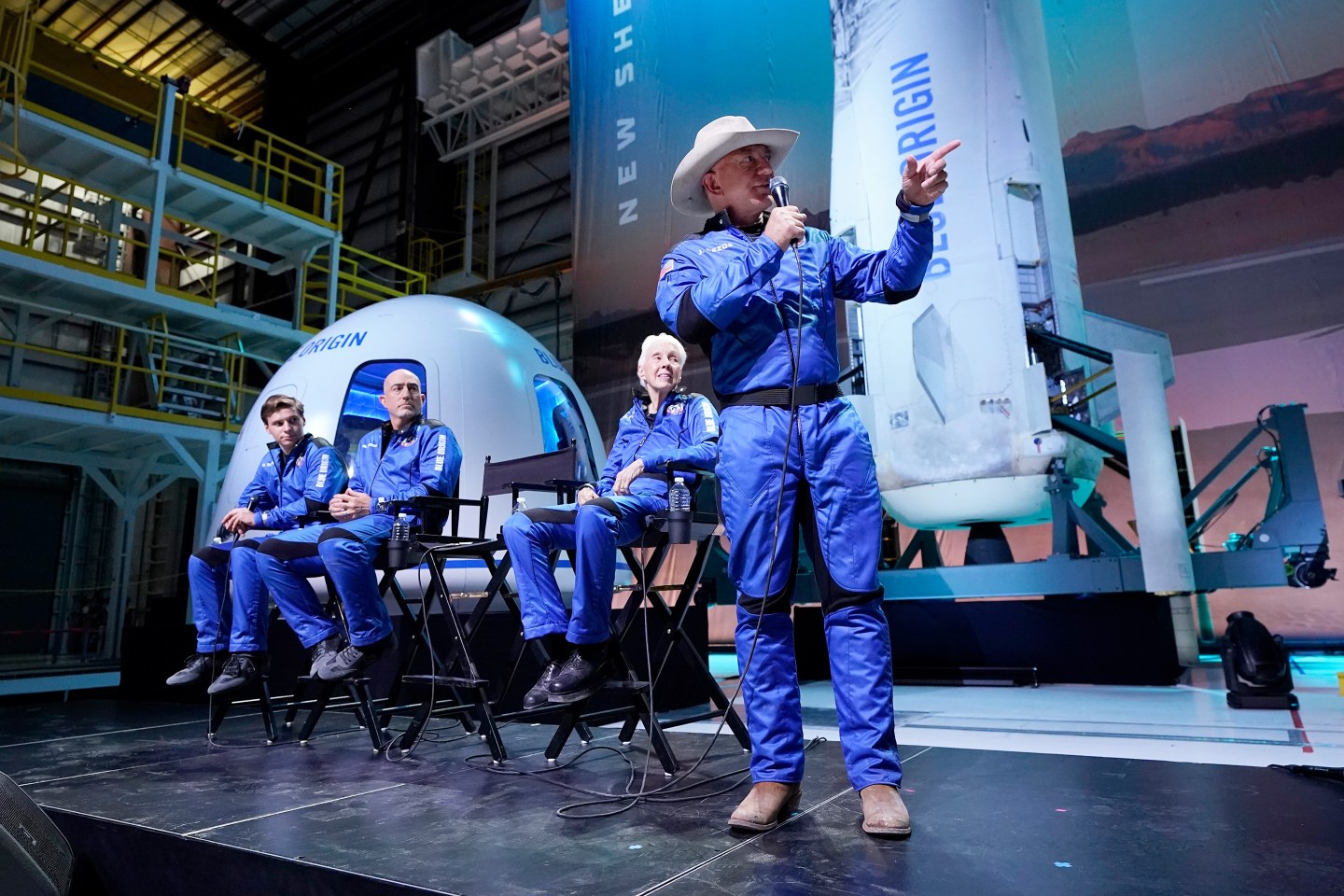 – Space race. A few weeks ago, I got in touch with Ally Abrams. A former head of employee communications at Blue Origin, she wanted to talk about her experience working at Jeff Bezos’s commercial space flight company.

Yesterday, Abrams was one of 21 current and former Blue Origin employees (the rest anonymous) to publish an open letter alleging a “toxic,” “sexist,” work environment at the company—one that they say also compromises vehicle safety. (Blue Origin did not respond to specific allegations but said that the company “has no tolerance for discrimination or harassment of any kind and “will promptly investigate any new claims of misconduct.” Abrams was fired from the company in 2019.)

“I believed we were saving humanity,” Abrams told me in an interview before the letter published via the online platform Lioness of her one-time belief in Blue Origin’s mission. “We’ve had to grieve losing our dreams—or realizing they never existed in the first place.”

In their letter, the employees provide specific examples of sexism in the workplace, including claiming that one executive had a pattern of addressing women as “baby girl” or “sweetheart” and one allegation of groping. They also bring up safety concerns about Blue Origin rockets, saying that meeting launch schedules took priority over safety; the Federal Aviation Administration said yesterday that it would review those allegations.

What stood out to me, though, was how those two issues were connected. Women were often the ones to raise safety issues, the employees said, and were sometimes “demeaned” for doing so. The treatment of women at Blue Origin was part of a general atmosphere in the male-dominated work environment that stifled “dissent,” they say.

The ex-employees see high stakes in bringing forward these claims. Blue Origin’s mission is to enable “a future where millions of people are living and working in space to benefit Earth.”

“Jeff Bezos and the rest of the leadership at Blue Origin must be held to account, and must learn how to run a respectful, responsible company before they can be permitted to arbitrarily use their wealth and resulting power to create a blueprint for humanity’s future,” they write.

- Get vaxxed. The Centers for Disease Control yesterday urged pregnant women to get vaccinated against COVID-19 in its strongest guidance yet. The agency reported that 161 pregnant women have died of COVID, the CDC said, with 22 deaths in August. NBC News

- Abortion story. At yesterday's House hearing on abortion rights, Rep. Cori Bush shared the emotional story of her own abortion. She was raped at 17 and became pregnant; she chose to end the pregnancy. "We have nothing to be ashamed of," the congresswoman said, specifically addressing Black women and girls who have had abortions. You can read or watch the full speech here: Elle

- Safety in soccer. National Women's Soccer League players say that North Carolina Courage Paul Riley verbally and sexually abused them and coerced a player into a sexual relationship. He was fired shortly after the news broke. Similar allegations have surfaced about other coaches in the 9-year-old league recently. Riley has denied the allegations. The Athletic

- Medical essentials. Rep. Ayanna Pressley is working on legislation that would require Medicare to pay for wigs for people who experience hair loss from disease or medical treatments. (Wigs are often covered by private insurance, but not by Medicare.) "It’s so much more than cosmetic," says Pressley, who has alopecia. Vanity Fair

- Border crossing. In a court filing this week, the state of Texas argued that its restrictive abortion law stimulates interstate commerce because women are forced to travel to other states to seek abortions. The state made the argument because the Biden administration has cited the law's impact on interstate commerce as grounds to sue. Fortune

- Streaming with the Sussexes. How did Meghan and Harry secure their multi-million-dollar Netflix and Spotify deals? This story dives deep into their entry into Hollywood as producers and asks the big question: will the pair serve as a draw for the streaming audiences when their programming is unrelated to their own lives and the Royal Family? WSJ

'How did you get pregnant?': How disabled mothers are neglected by modern medicine LA Times

The rise of the childfree movement on TikTok Mashable

"If you don’t hope that your actions can make a difference, then you sink into apathy."

-Jane Goodall, on the cover of Time