OZY learns that yes, it can get so much worse 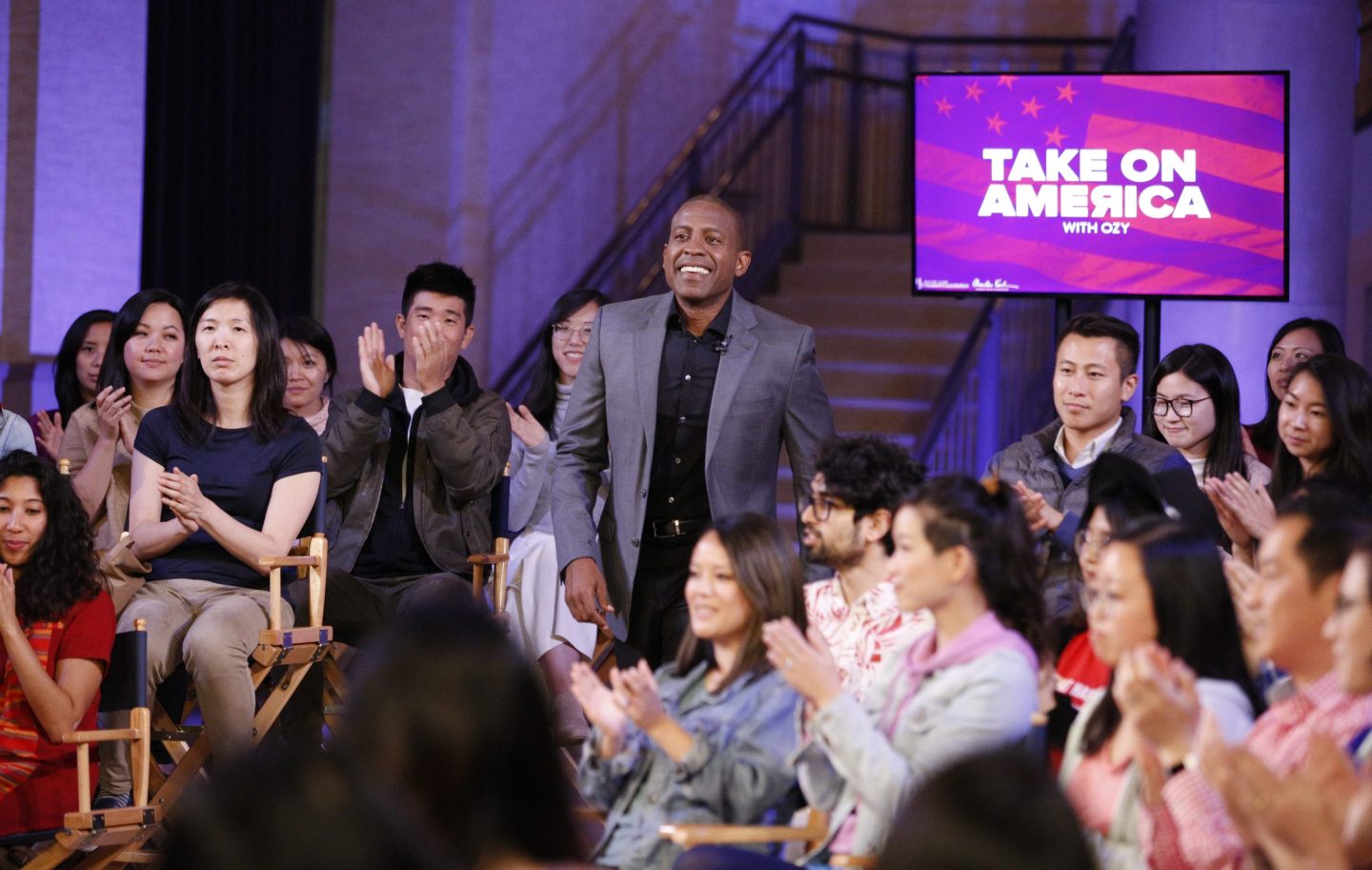 Earlier this week, the New York Times published a bizarre story about OZY, the media startup backed by some big names including businessman Marc Lasry. Beyond questions about whether the company fudged its subscription numbers, it also included an anecdote in which a co-founder impersonated a YouTube executive on a call with potential investors.

Despite the very real concern of fraud that the incident brought up (the FBI is said to be looking into the company, though the company says it has not received an inquiry), the company’s CEO Carlos Watson dubbed it as a mental health crisis on the part of his co-founder, Samir Rao, and the board of the company reportedly did not take any action. Rao in turn took some time off, before returning. That lack of consequence however elicited shock this week from those who read the story.

And it eventually turned into shockwaves.

Watson backed out of hosting the documentary section of the Emmy Awards Tuesday, while investor SV Angels, led by Ron Conway, backed away from OZY by telling the company it no longer wanted to stock it acquired back in 2012, per Axios. OZY also suspended Rao following the story’s publishing, and has hired law firm Paul, Weiss, Rifkind, Wharton & Garrison to conduct a review. Not only is the company receiving pressure from its investors and outsiders, it’s now also facing a raft of angry employees speaking out about the abusive work culture to CNN and being pressured into stock options pay raises to Bloomberg —options that are now looking horribly unattractive.

Then on Wednesday, notable journalist Katty Kay, formerly of the BBC, resigned very publicly on Twitter writing: “I had recently joined the company after my long career at the BBC, excited to explore opportunities in the digital space,” she wrote. “The allegations in the New York Times, which caught me by  surprise, are serious and deeply troubling, and I had no choice but to end my relationship with the company.” Ironically, with 5,500 likes as of this newsletter’s publishing, that Tweet received greater traction than that of Watson defending himself against the NYT’s story: “Heartbroken by the ridiculous hitjob from the NYTimes,” his Monday post with 136 likes read. “But we are undeterred.”

It’s hard to find any poetry in this, but somehow, there is. Back in 2015, Fortune’s Mathew Ingram asked Watson what OZY stood for. Here’s the passage with the CEO’s response: “Watson said the name of the company came from one of his favorite poems—Shelley’s Ozymandias—which tells the story of an ancient king whose broken statue now sits forgotten in the desert. Some have taken the poem to mean that even mighty kings are eventually forgotten, but Watson said the lesson he takes from it is that you have to dream big… A spokesperson for Ozy Media clarified that Watson interprets the poem Ozymandias to mean: ‘Think big, but be humble, lest you end up ‘two vast and trunkless legs in the desert.’”

Amid allegations of inflated numbers and fake-it-until-you-make-it behavior, the legs, it seems, are coming off of OZY.

NASHVILLE’S SECOND UNICORN, AND VERMONT’S FIRST: The recent surge in venture dollars and deal making has bolstered states outside the typical trifecta (Massachusetts, New York, and California) including Georgia. On Thursday, Tennessee got its second ever unicorn, per data from Pitchbook: Nashville-based Built Technologies, a maker of software for construction financing, raised $125 million in Series D funding valuing it $1.5 billion. TCV led the round and was joined by investors including Brookfield Technology Partners, 9Yards Capital, XYZ Venture Capital, and HighSage Ventures. The state’s first $1 billion-plus startup, Clover Health, agreed to go public via SPAC earlier this year.

Built may not be Tennessee’s first unicorn, but 2021 did ring in a first for Vermont: BETA Technologies, an aerospace and electric aircraft maker in Burlington, Vt., raised $368 million in a round led by Fidelity, valuing it at about $1.4 billion. The first manned electric aircraft company to receive airworthiness from the Air Force in May, the valuation minted BETA as Vermont’s very first unicorn.

FORMER BUMBLE COO’s NEXT ACT: Sarah Jones Simmer had undergone nine months of treatment for stage-three breast cancer when her then employer, Bumble, was going public. Now, the former COO of the dating company is leading a company herself. Per my colleague, Emma Hinchliffe, Found, a weight care startup, has raised $32 million in funding from investors including GV and Atomic. Jones Simmer has been named its CEO. Read more.

- Meesho, an Indian e-commerce platform, raised $570 million. Fidelity Management & Research Company and B Capital Group. led the round and were joined by investors including Prosus Ventures, SoftBank Vision Fund 2, and Facebook. It values the company at $4.9 billion.

- Perfect Day, a Berkeley, Calif.-based animal-free milk protein maker, raised $350 million in Series D funding. Temasek and Canada Pension Plan Investment Board led the round and were joined by investors including Horizons Ventures, SK, and Bob Iger. A source familiar with the deal values it at $1.5 billion.

- OfBusiness, an India-based seller of industrial goods, raised $207 million in Series F funding valuing it at $3 billion, per TechCrunch. Tiger Global led the round.

- Konfío, a Mexico City-based fintech, raised $110 million in extended Series E funding valuing it at $1.3 billion valuation. Tarsadia Capital and QED Investors led the round and were joined by investors including Softbank, VEF, Kaszek Ventures, the IFC, and Lightrock.

- Expansion Therapeutics, a Boston-based biotech company focused on oral medicines for severe RNA-mediated diseases, raised $80 million in Series B funding. Cormorant Asset Management led the round and was joined by investors including Westlake Village BioPartners, Surveyor Capital and Logos Capital.

- Kore.ai, an Orlando-based conversational A.I. company raised $50 million in Series C funding. Vistara Growth and PNC led the round and were joined by investors including NextEquity Partners, Nicola Wealth, and Beedie Capital.

- Wider Circle, a Redwood City, Calif.-based health organization, raised $38 million in Series B funding. AmeriHealth Caritas led the round and was joined by investors including Blue Venture Fund and Chicago Ventures.

- Tonic.ai, a San Francisco-based company maker of fake data for testing, raised $35 million in Series B funding. Insight Partners led the round and was joined by investors including GGV Capital, Bloomberg Beta, Octave, Heavybit, and Silicon Valley CISO Investments.

- QC Ware, a Palo Alto, Calif.-based quantum algorithms company, raised $25 million in Series B funding. Koch Disruptive Technologies and Covestro led the round and were joined by investors including Samsung Ventures.

- QisstPay, a Pakistan-based buy-now-pay-later company, raised $15 million in seed funding. MSA Capital led the round and was joined by investors including Global Founders Capital; Fox Ventures, and First Check Ventures.

- Loop Health, an India-based health insurance startup, raised $12 million in Series A funding. Elevation Capital and General Catalyst led the round and were joined by investors including Khosla Ventures, YC Continuity Fund, and Tribe Capital.

- MaestroQA, a New York City-based maker of support team software, raised $25 million in Series A funding. Base10 Partners led the round and was joined by investors including Talkdesk Ventures, Itai Tsiddon (lead investor at Frame.io), and Tokyo Black.

- Gelato Network, a maker of a blockchain protocol, raised $11 million. Dragonfly Capital led the round.

- Genetika+, an Israel and Boston-based personalized medicine platform, raised $10 million  in Series A funding. GreyBird Ventures led the round and was joined by investors including Meron Capital, Jumpspeed Ventures, Sapir Venture Partners, Howard Morgan (Chairman of B Capital Group), and Michael Zeisser of FMZ Ventures.

- Visor, a New York City-based maker of a connected spreadsheet, raised $5 in seed funding. General Catalyst led the round.

- GrayMatter Robotics, a Los Angeles-based maker of robotic assistants focused on surface treatments, raised $4.1 million in seed funding. Stage Venture Partners and Calibrate Ventures led the round and were joined by investors including 3M Ventures, OCA Ventures, Pathbreaker Ventures, and B Capital Group.

- Botco.ai, a Scottsdale, Ariz.-based conversational marketing company, raised another $1.6 million in seed funding from VamosVentures, bringing the total seed round to $3.6 million.

- CodeSee, a San Francisco codebase visualization tool, raised $3 million in seed funding. boldstart ventures and Uncork Capital led the round and were joined by investors including DCVC, Precursor Ventures, and Salesforce Ventures.

- KKR is in talks to acquire Probe Group, an Australian outsourcing company, for A$1.2 billion ($871 million), per Bloomberg.

- AstraZeneca (Nasdaq: AZN) will take control of Caelum Biosciences, a New Jersey-based rare disease drug maker, for up to $500 million.

- Walgreens Boots Alliance (Nasdaq: WBA) is reportedly weighing an acquisition of Evolent Health(NYSE: NVH) a health IT company, per Bloomberg. Evolent is currently valued at about $2.5 billion.

- Hong Kong’s government plans to wind up Next Digital, the Hong Kong-based publisher of Apple Daily.

- Olaplex Holdings, a Santa Barbara, Calif.-based hair care brand, raised $1.5 billion in an offering of 74 million shares priced at $21 per share—it previously planned to raise up to $1.3 billion. The company reported net sales of $99.6 million in 2020 and a net loss of $22.4 million. Advent International owns a majority stake in the company, and Mousse Partners back the firm.

- Claire’s, a Hoffman Estates, Ill.-based jewelry company, filed for an IPO. The company reported $1.3 billion in net sales in 2020 and a net loss of $198 million. Goldman Sachs, JPMorgan Chase, Elliott Capital Management, and Monarch Alternative Capital back the firm.

- Rakuten Bank, the banking unit of Japanese online retail company Rakuten Group, is preparing for an IPO, per Reuters.

- Ensemble Health Partners, a Cincinnati, Oh.-based revenue software company for health systems, filed for an IPO. The company reported $600 million in net revenue in 2020 and net income of $101 million. Golden Gate Capital and Bon Secours Mercy Health back the firm.

- Theseus Pharmaceuticals, a Cambridge, Mass.-based cancer treatment company, plans to raise up to $133 million in an offering of 8 million shares priced between $14 and $16 per share. The company reported a net loss of $12 million in 2020 and has yet to post revenue. OrbiMed Advisors, Foresite Capital, and Takeda-owned oncology company ARIAD Pharmaceuticals back the firm.

- Ventyx Biosciences, an Encinitas, Calif.-based inflammatory disease and autoimmune disorder therapy company, filed for an IPO. It posted a net loss of $28 million in 2020 and has yet to post revenue. New Science Ventures, venBio, and Third Point Ventures back the firm.