She ran Bumble’s IPO while being treated for breast cancer. Now she’s becoming a CEO 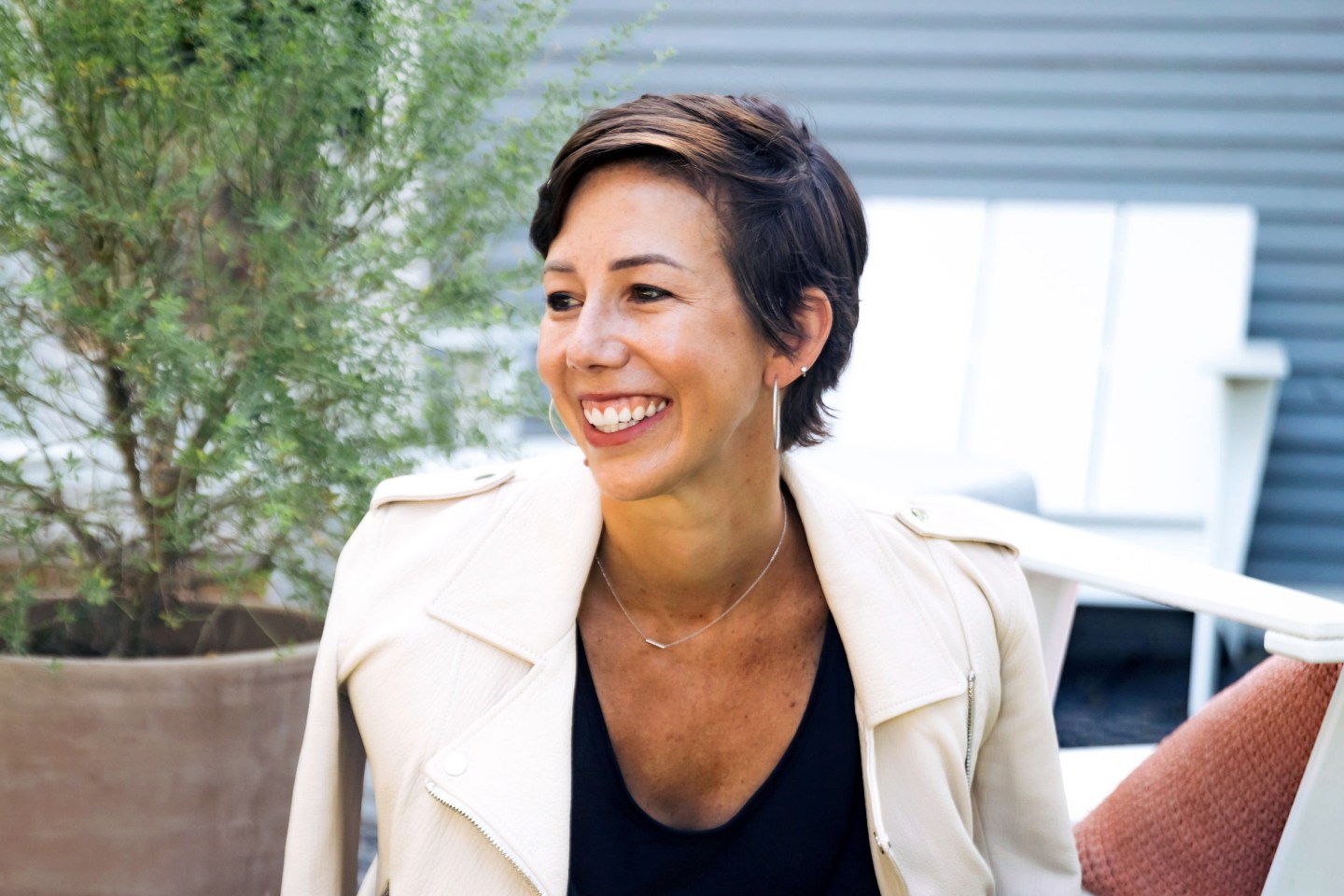 On the day of Bumble’s initial public offering last February, Sarah Jones Simmer felt vulnerable as she arrived at the dating app’s Austin office. After nine months of treatment for stage 3 breast cancer, the company’s big day—and hers—was the first time she saw her coworkers without wearing a wig or head covering. Instead, she showed up with her slowly regrowing hair fully visible.

“I was stepping out as myself in this new form,” Jones Simmer says. As she took the floor next to Bumble CEO and founder Whitney Wolfe Herd, who held her young son on her hip, it occurred to Jones Simmer that the two of them seemed to represent “women going through all chapters and forms of their journeys.”

Former Bumble COO Sarah Jones Simmer is seen in the background to the left of Bumble founder and CEO Whitney Wolfe Herd, on the day of the dating app’s IPO.
Courtesy of Kristen Kilpatrick

Jones Simmer was Bumble’s chief operating officer turned chief strategy officer, who joined in 2017 to help scale the business. So the company’s market debut was a milestone for her professionally, too; throughout her breast cancer treatment, her laser focus at Bumble was “quarterbacking” the startup’s IPO.

Seven months later, Jones Simmer has been cancer-free for six months and is stepping into a new role—this time as a CEO. But, just in time for Breast Cancer Awareness Month, beginning Oct. 1, she wants to tell the story of her illness, treatment, and recovery—and the significance her job played for her throughout.

The journey to an IPO

When Jones Simmer received a breast cancer diagnosis in May 2020, one of the first people she told was Kelley Morrell, an executive with Bumble majority shareholder Blackstone, who had served as the dating app’s president during Wolfe Herd’s parental leave. Jones Simmer rarely missed a meeting, and when Morrell checked in with her after she skipped one for a doctor’s appointment, she blurted it out: “I was just diagnosed with breast cancer.”

Jones Simmer was 37, with no family history. She was the mother of two young children, ages 3 and 5, and working a demanding C-suite job. Her cancer was “triple positive,” which meant there were several options for treatment—but also that it was aggressive. Jones Simmer quickly froze her eggs in anticipation of the damage her doctors expected chemotherapy to do to them; she started chemotherapy three weeks later.

Amid this upheaval, Jones Simmer realized one thing: She didn’t want to stop working. “My work was a big part of my identity,” she says now. And cancer comes with so much loss. “You lose your hair, you lose your chest, you lose your fertility. I wanted to feel like I was bringing something into the world.”

She spoke to Wolfe Herd about her role at Bumble, which, as COO, was wide-ranging. They narrowed her focus to the upcoming IPO, which Jones Simmer, who earlier in her career worked at a hedge fund, felt better equipped to handle. “In the COO role, I was responsible for people’s professional growth and development,” Jones Simmer says. “I love that work normally, but I didn’t feel like I had the emotional bandwidth. But something like figuring out how to articulate Bumble’s positioning and market and value—that really did energize me.”

Jones Simmer spent the next several months drafting Bumble’s S-1, often from her chemo chair—and she submitted to the board the first draft of the document the morning of her double mastectomy. She served as the point of contact for all things IPO between a majority-women team across Bumble, Blackstone, and bankers from Goldman Sachs and Citi (including Jane Fraser, who joined a Bumble IPO call before she was named Citi CEO). Alongside Wolfe Herd and chief financial officer Anuradha Subramanian, who joined the company in September 2020, Jones Simmer represented Bumble to Wall Street.

As she did that work, her treatment continued. In total, in the weeks and months surrounding the IPO, Jones Simmer had nine surgeries, 21 sessions of chemo, and 37 rounds of radiation.

“Sarah has been incredibly instrumental in our success—well before and during our IPO,” Wolfe Herd said in a statement to Fortune. “It was an honor to ring the bell by her side that day, knowing all she’s been through and all she’s overcome.”

While Jones Simmer knew intuitively that work would energize her during her treatment, the realities of a serious diagnosis affected her long-term career perspective, too. At one point, a doctor gave Jones Simmer a potential five-year “worst-case” scenario (that outlook has since changed). “The five-year framework really stuck with me,” Jones Simmer says now. “If you had a month, you would change everything and make sure every day truly counted, right? But five years—what are the changes I want to make? Am I leaning into the things that matter? I knew that meant choices around my career. A piece of that was becoming a CEO.”

While that reaction may sound foreign to some who, faced with a devastating diagnosis, would forget work and focus solely on family and friends, Jones Simmer quickly surrounded herself with a group of women who understood how she felt. As she navigated cancer treatment, she connected with a handful of women who had faced down similar diagnoses at similar points in their lives and careers, among them Anthos Capital president Emily White, Charity: Water chief revenue officer MZ Goodman, and Charter cofounder and former Away exec Erin Grau.

“Cancer was taking so much,” says Grau, who was diagnosed with breast cancer about a year before Jones Simmer and also worked through her treatment as Away’s VP of people and culture. “It wasn’t going to take her career. And it didn’t take my career.”

The group offered practical advice, like the best time to schedule chemotherapy appointments around a work calendar (Thursday, because the full force of the treatment will hit over the weekend) and to remember to get her eyebrows microbladed before starting chemo, which would cause her brows to fall out.

The perspectives of these women helped Jones Simmer as she realized that her most important professional goal, with both a successful IPO and cancer treatment behind her, was to strike out on her own.

A CEO job of her own

Today, Jones Simmer is announcing her new position as CEO of Found, a year-old weight loss company that has been led by COO Swathy Prithivi. It’s a space that comes with baggage in an age of body positivity and growing popularity of a “health at every size” approach to medicine, but Jones Simmer sees parallels between her old job and her new one. In a CEO position, she was searching for a mission that matched the purpose she found in her work at Bumble. Online dating and weight loss have both been “stigmatized,” she says. “Health was the only thing that rose to the same level as relationships,” she says.

Found—its name a play on the “loss” in “weight loss”—offers customers “weight care” that includes telehealth services and the option for prescription medication. The weight loss approach is informed by the kind of treatment available at clinics like Columbia University’s Metabolic and Weight Control Center, and the company says its strategy is more holistic than calorie-counting online programs, factoring in elements like stress, sleep, community, and biology.

The program has “thousands” of members, and Jones Simmer is joining at a time that reminds her of where Bumble was when she signed on to help scale the business. The company has raised $34 million in funding from investors including GV, the former Google Ventures; GV partner Frederique Dame is now joining the company’s board.

While Jones Simmer’s cancer experience helped her realize she wanted to make becoming a CEO a priority, it’s also informed her approach to a health business. “My exposure to health care—it made me rethink my body and what it’s capable of, and those are the messages we want to communicate to our members,” she says.

Jones Simmer has already led one IPO, and Found likely has a long path before any sort of exit. But Jones Simmer will be making the most of the journey. “I have this very real understanding of how precious our time is that I could only get as a result of cancer,” she says. “Now, I had to take that bet on myself.”