Popular outrage, not economics, will determine the fate of Big Tech 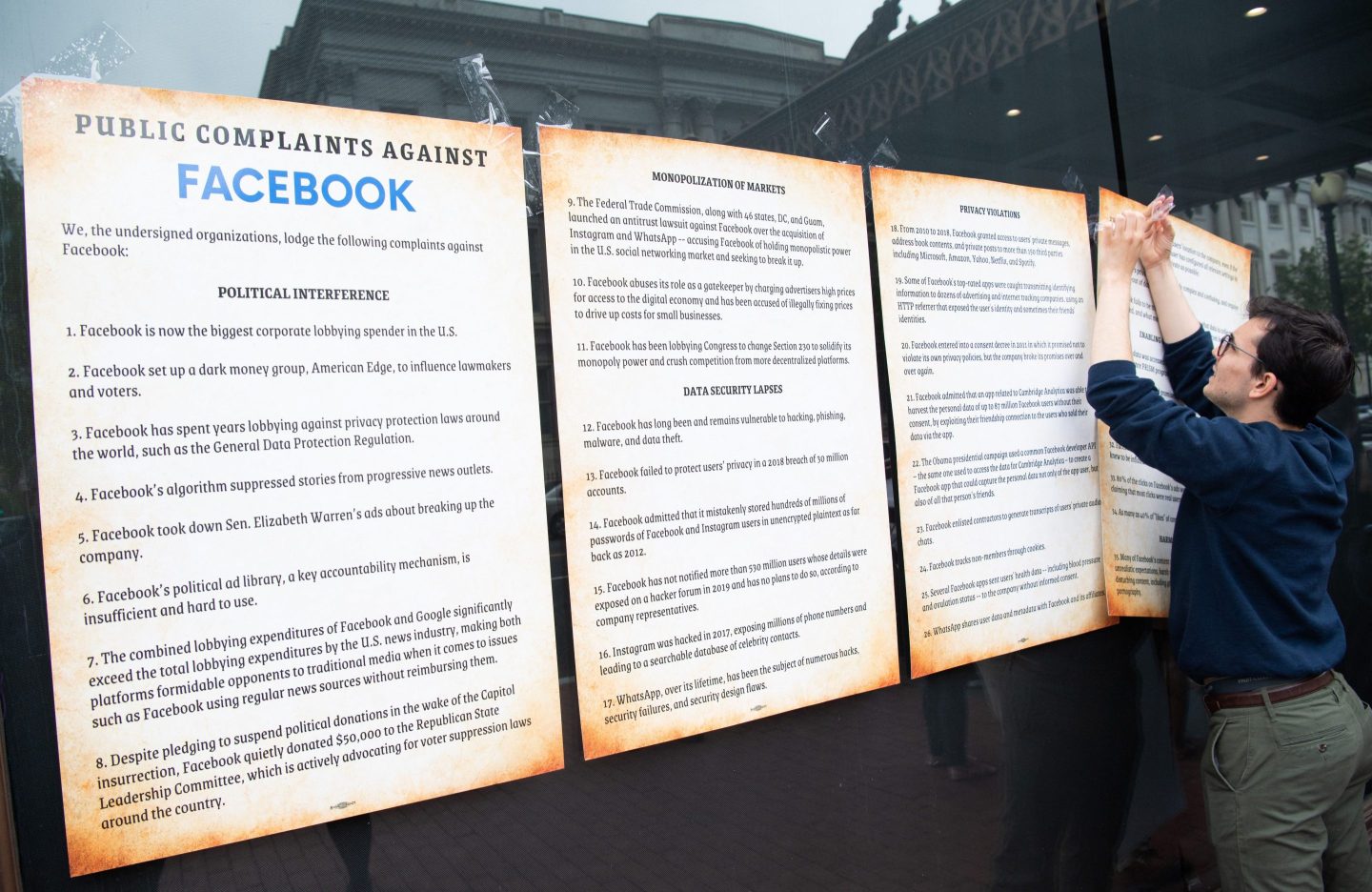 A protester posts a list of “public complaints” against Facebook at a rally in Washington, D.C., in May 2021. “The path from corporate power to regulatory backlash is neither linear nor predominantly about economics,” the authors write. “What’s overlooked in today’s debate is the catalyzing power of popular outrage.”
SAUL LOEB—AFP/Getty Images

Recent developments might suggest that Big Tech is nearing its regulatory reckoning.

The power of the biggest tech companies has grown too ubiquitous to ignore—their dominance can be felt in the stock indexes, in segments of the labor market, and in the oversight (or lack thereof) of public discourse, to name just a few areas of influence. Little surprise, then, that the political script appears to be at a turning point: Regulatory agencies, now staffed with vocal critics of the industry, are accelerating the pursuit, with Facebook and Google squarely in the crosshairs of antitrust litigation.

Yet predicting Big Tech’s comeuppance could be a losing bet. The path from corporate power to regulatory backlash is neither linear nor predominantly about economics. What’s overlooked in today’s debate is the catalyzing power of popular outrage. The presence of such anger has reliably aligned political will and driven regulatory pushback in the past—and its absence has slowed or prevented such pushback.

To see why the political economy of outrage will likely shape Big Tech’s regulatory fate, a brief tour of U.S. history is a good starting point.

The legacy of Ida Tarbell

The Sherman Act and the dismemberment of Standard Oil in 1911 are often invoked today to highlight regulatory risk and power. However, a more interesting question is why the Sherman Act, passed in 1890, sat idle for nearly 20 years, even as politicians watched Standard Oil’s growing abuse of its market power. What changed?

What forced Teddy Roosevelt’s hand wasn’t economic benchmarks such as peaking market share or high prices. It was Ida Tarbell, a star of the emerging field of muckraker journalism, who was on a mission of personal revenge to expose the Rockefeller empire. Her History of the Standard Oil Company (1904) was a bestseller, serialized in McClure’s Magazine to great effect, and successfully galvanized public opinion against the Rockefellers and their monopoly. Growing up, Tarbell had witnessed Standard Oil bullying her father to sell his oil business—when he refused, the family had to mortgage their home.

As such, the birth of U.S. antitrust action captures enduring political-economy dynamics: Standard Oil had enormous political clout and averted regulatory action for years. Yet, a groundswell of popular anger was sufficient to align political incentives to apply the law to Standard Oil.

It would be a mistake to see Tarbell’s victory as a case of idiosyncratic history. On the contrary, the force of public outrage—surprisingly often channeled via the vehicle of literature—plays out again and again in the 20th century.

Consider the emergence of the Food and Drug Administration, for example. Upton Sinclair, a contemporary of Tarbell’s, published The Jungle a little after Tarbell’s History. Despite being a work of fiction, The Jungle spawned massive popular backlash against the disgusting conditions in the meat processing plants of Chicago—the reading remains revolting to this day. The public reaction to Sinclair’s story, initially published in 1905, pushed President Roosevelt to sign the Pure Food and Drug Act, which passed by an overwhelming bipartisan majority of 63 to 4 in the Senate in 1906 and founded what is now the FDA.

There are many other examples of popular resentment driving regulatory action: The financial Panic of 1907 helped create the Federal Reserve; Rachel Carson’s Silent Spring contributed to the swaying of another Republican President, Richard Nixon, to create the Environmental Protection Agency; the Great Financial Crisis of 2008 led to the Consumer Financial Protection Bureau—and so on.

While the historical examples above draw straight lines from anger to regulatory shock, it is true that some of the biggest antitrust cases in U.S. regulatory history meandered for decades—antitrust cases against AT&T, IBM, and later Microsoft come to mind. Here, too, popular backlash—or the lack of it—played a critical role in shaping their regulatory fates.

Yes, AT&T was broken up—in 1982. But its conflict with antitrust regulators had begun all the way back in 1913. Over the years, the company bounced around from being viewed as a good monopoly to being a state-sanctioned monopoly (recall you had to rent your phone from Ma Bell—but couldn’t own it). After a meandering 70-year regulatory pursuit, AT&T lost its case and agreed to break up on Jan. 8, 1982.

By contrast, on that same day in 1982, a 30-year–long regulatory pursuit of IBM was dropped. Yet despite avoiding a breakup, the cumulative impact on IBM was arguably more significant than that on AT&T. IBM had been pushed into unbundling hardware and software, which successfully opened space for new software behemoths—leaving IBM strategically on the back foot.

Popular anger did not underpin the regulatory pursuits of Ma Bell and Big Blue. They did not inspire indignation, perhaps because expensive long-distance calls and clunky computers did not spark emotion—or perhaps because their stories lacked their Tarbell or Sinclair. That did not prevent regulatory action, but that action played out on the battlefield of technocratic concern, which translated into a long-winded regulatory dance and yielded outcomes far preferable to Standard Oil’s fate.

Microsoft, which moved into the space that IBM’s curtailment had opened, remains an interesting case in the context of outrage and regulation. For there was—some—outrage. It’s easy to forget how loathed in some quarters the firm and Bill Gates were in the late 1990s, just around the time when regulatory scrutiny peaked: the bullying of Netscape, the bundling of software, Gates’ widely panned deposition performance in testimony before Congress, all drove popular dislike if not quite mass resentment.

What remains mostly forgotten today is that the judge ruled, in 2000, that Microsoft should break up—delivering a fast judgment aligned with popular sentiment of recent years. Yet the outrage didn’t sustain itself through political transition and appeal. In 2001 the Justice Department said it was no longer seeking a breakup and agreed to a settlement.

Is Big Tech more like Standard Oil, or IBM?

While history should always be used with care, the correlation between popular backlash (or lack thereof) and sharp regulatory backlash (or lack thereof) remains compelling. In some ways, this is more surprising if we think of antitrust regulation as a field of technocratic economic analysis, and less surprising if we think of it as politicians responding to incentives—such as when the influence of corporate power is outweighed by the electoral threat of outrage.

So, is there outrage today that can drive political backlash? Not so much. There are two types of popular resentment—economic and political—and we need to look at both.

Economic resentment typically boils down to consumers’ reaction to abusive pricing (prices are too high) or low quality (the product is hazardous). But Big Tech is providing high-value products for free—at least in the eyes of most consumers, who do not put a price on their personal data, privacy, and on the attention they willingly give and that platforms crave so much. It remains a barter trade, not a transparent economic transaction, and so economic outrage is unlikely to grow against a backdrop of ever more potent tech offerings.

Political resentment about tech firms’ societal impact looks like it could become a stronger force. This applies in particular to concern about the control of platforms of speech. The political right is infuriated by deplatforming. On the left, opposition centers on the platforms’ amplification of misinformation and divisive speech. What’s lacking today is unifying outrage that aligns political momentum behind a potent argument—an exceedingly high bar in a highly partisan and tightly divided polity.

All this makes a bet on a regulatory dismemberment of Big Tech firms look like long odds. But if Big Tech is not headed the way of Standard Oil, might it be headed the way of IBM? The long and meandering path of regulatory pushback looks much more likely today. Here the game is more likely to be played in bureaucracies of regulatory power. Today’s regulators are in the midst of a legal debate about the meaning of antitrust, with the “New Brandeis” school arguing for a broader definition of competition, not just a narrow focus on costs and benefits to consumers.

This path is likely to be long and winding, strewn with legal and political hurdles, including the lobbying clout of the firms themselves. While this potential pushback remains a significant challenge for Big Tech’s corporate strategy, it looks more like the long game, not the big bang that would dismantle their power in the short run. Expect evolution, not revolution: Big Tech is here to stay.