The future of Parisian retail is also its past 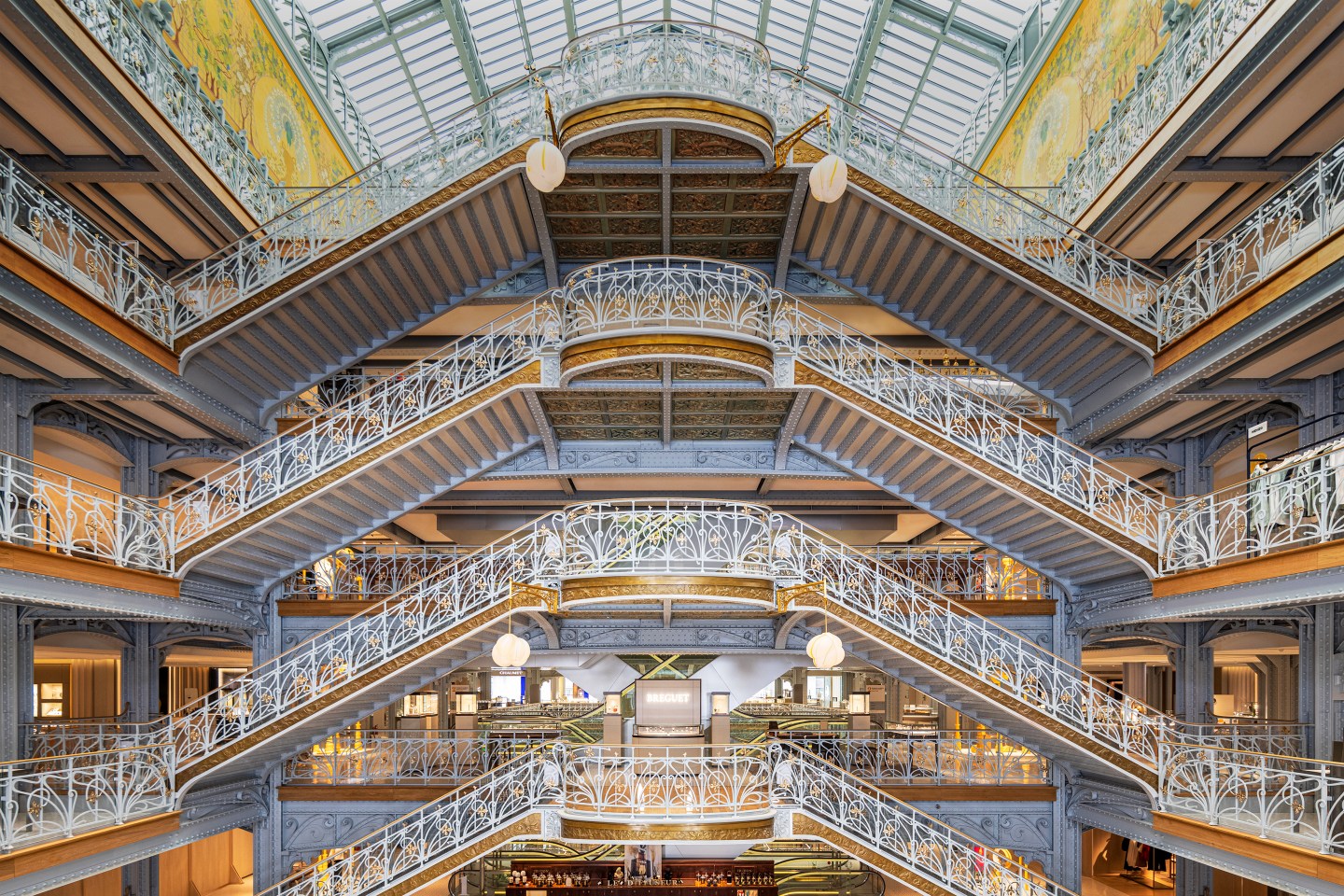 To restore the grandeur of the Samaritaine’s Art Nouveau staircase, 16,000 gold leaves were used.
Courtesy of La Samaritaine

“One finds everything at La Samaritaine!” went the popular slogan of Paris’s iconic Art Nouveau department store overlooking the Seine. That’s no longer true, as evidenced by the Samaritaine’s highly anticipated reopening this June as a luxury emporium after a 16-year closure and $900 million restoration by luxury goods conglomerate LVMH. The eccentricity of the landmark’s former incarnation—where locals shopped for everything from light bulbs and garden supplies to dresses and stationery—has been replaced by a sleek and splashy curation of designer clothes, upscale beauty brands, a Cinq Mondes spa, and 12 food and Champagne concept spaces spread across four buildings.

President Emmanuel Macron’s presence at the store’s inauguration, alongside LVMH chairman and CEO Bernard Arnault, Mayor Anne Hidalgo, and 800 applauding store employees, is a signifier of the Samaritaine’s totemic role in France’s post-COVID economy. The space is anchored firmly in the city center, bookended by major draws such as the Louvre, Notre-Dame, and the newly opened Pinault Collection museum. For pro-business Macron, the development “highlights the capacity to reinvent the places that have defined the city’s history.”

That history for the Samaritaine began in 1870, when Ernest Cognacq, a salesman who got his start peddling fabrics underneath a red umbrella on the Pont Neuf, opened the shop with his wife, Marie-Louise Jaÿ. Their pioneering approach to retail—organizing merchandise by department, displaying prices on goods, running regular promotions, and allowing customers to try on clothing—would go on to inspire other iconic stores abroad, namely Macy’s and Selfridges.

The accessories floor features boutiques from the likes of Louis Vuitton and Celine.
Sipa/AP Images

By the time LVMH bought a majority stake in the landmark in 2001 (and took full ownership in 2010), the Samaritaine was run-down and losing influence. When the store was forced to close in 2005 for fire-safety reasons, it became a flash point for residents and former employees. Accusations were made that LVMH had allowed the store to deteriorate so that it would need to close—enabling the group to build what it had wanted all along: a luxury real estate project. Naturally, there is a lot riding on the store’s success given its prolonged closure, a number of highly public legal battles, and controversial additions.

While it may have historic bones and a strong nostalgia quotient, the store’s retail strategy needed an update. “Customer expectations have completely changed in the last 16 years,” says Éléonore de Boysson, president of DFS Europe & Middle East, LVMH’s duty-free arm that will operate the store. “We had to create la Samaritaine for the 21st century.” To achieve this, de Boysson and her team have brought in 650 brands, of which 50 are exclusive to the store, and conceived multiple pop-up spaces that will rotate throughout the year, such as the Perrotin art gallery and areas reserved for Champagne-bottle customization.

The shopping footprint is just 215,000 square feet, making it the smallest of the city’s grands magasins. The remaining real estate is devoted to a day-care facility, office space, 96 social housing units, and a Cheval Blanc five-star hotel, which opens in September. A translucent, rippling glass facade designed by the Japanese Pritzker prize–winning firm Sanaa (which critics have likened to a shower curtain) marks the more industrial entrance on the Rue de Rivoli, and an underground walkway connects the Louvre to the store’s vast beauty department.

Inside, the light-infused atrium and filigreed balustrades feel just the right amount of Parisian to offset the could-be-anywhere aesthetic of Sanaa’s spaces. Because as fresh and ever-changing as the retail focus is meant to be, the Samaritaine’s heritage and celebration of French savoir faire will be vital in attracting both tourists, as they start to trickle back, as well as native Parisians.

If it succeeds, particularly when large retailers struggle to stay relevant, it will be for striking that balance and playing up the French exception, as Macron called it. “Far from homogenized malls, it’s French art de vivre that is highlighted here,” said the President. “When there is the best of France—a sense of tradition, an anchor in history, and creativity—not even difficult times can stop us.”

This article appears in the August/September 2021 issue of Fortune with the headline, “Paris: Past & Future.”