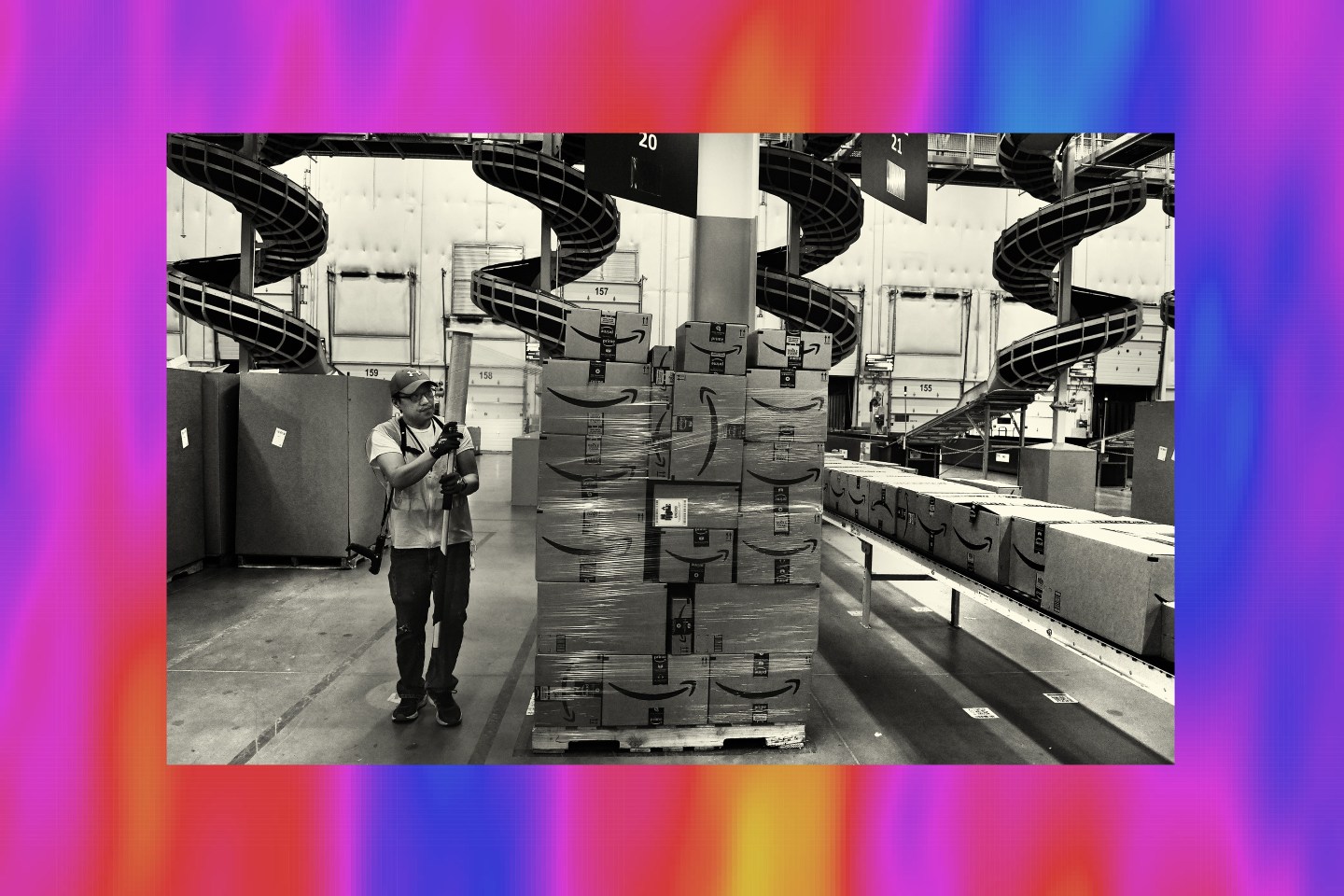 This story is part of The Path to Zero, a series of special reports on how business can lead the fight against climate change. This quarter’s stories go in depth on sustainability in supply chains.

By 2022, Amazon plans to put 10,000 electric vehicles on the road.
Courtesy of Amazon
At an Amazon fulfillment center in Colorado, a warehouse associate wraps a pallet of boxes in plastic.
Helen H. Richardson—MediaNews Group/The Denver Post/Getty Images

Amazon is bigger than ever, commanding a Prime Day shopping event that has forced the competition to follow suit and was expected to bring in over $10 billion in just two days.

But the company’s astronomical growth throughout the pandemic has raised questions about its sustainability commitments and the progress it’s making.

In early 2019, its founder and CEO, Jeff Bezos, unveiled the Climate Pledge at the National Press Club in Washington, D.C., announcing the company’s commitment to “building a sustainable business for our customers and the planet.”

Achieving these stated goals would mean shrinking its carbon footprint across all of its businesses to achieve carbon neutrality by 2040, a decade ahead of the Paris Agreement’s timeline. The pledge also included reducing greenhouse gas emissions in its operations and in the making of its own products, including packaging and shipping, as well as across its supply chain.

Fortune’s review of ESG data compiled by CSRHub—which provides corporate social responsibility ratings for thousands of public and private companies worldwide—shows that while Amazon has in fact been making progress over the past several years, it still has room for improvement and currently ranks behind competitors such as Walmart and Alibaba in the climate change subcategory, which tracks energy use and CO2 emissions.

In the environmental category, Amazon has reached the 63rd percentile, a significant improvement from its position in the seventh percentile back in April 2016, according to the most recent CSRHub data shared with Fortune.

Most recently CSRHub gave Amazon an overall score of 52 out of 100.

That’s a significant improvement, said CSRHub cofounder and CEO Cynthia Figge, though it lags Walmart and other competitors.

“A few years ago, they were as low as you get for a major corporation. But as they’ve gotten a lot more scrutiny, they’ve upped their game,” she said, noting that Amazon has put significant resources into its sustainability initiatives. “They’ve come a long way, and it is a journey.”

As the company’s sustainability approach has grown more ambitious, with frequent announcements about new initiatives, industry analysts say Amazon still misses the mark because it isn’t putting enough pressure on its suppliers and third-party sellers to use renewable materials in their products, and it isn’t transparent enough about the progress it is making.

The company’s overall ESG rating was downgraded from medium risk to high risk by Sustainalytics, an ESG research firm owned by Morningstar, in its most recent report. The rating indicates the company’s “overall risk of experiencing material financial impact due to ESG factors,” Sustainalytics noted.

“Given their size and prominence, they could do more if they really wanted to walk the talk,” said Christopher Marquis, the Samuel C. Johnson Professor in Sustainable Global Enterprise at Cornell University, adding that the company could incentivize consumers to group their purchases into a single order to reduce packaging waste.

To achieve its ambitious goal of carbon neutrality, the tech giant aims to power its operations with 100% renewable energy by 2025; place 100,000 electric delivery vehicles on the road by 2030; and make all of its shipments net-zero carbon.

It has persuaded more than 100 companies across multiple industries in 16 countries, including brands like Unilever, Microsoft, and Verizon, to sign the Climate Pledge, each one committing to address climate change and reach net-zero emissions by 2040.

More recently, it joined other tech giants such as Facebook and Alphabet in pressuring the Securities and Exchange Commission to make companies report their greenhouse gas emissions.

Amazon has also set up funds to invest $2 billion in the development of technology that reduces emissions and $100 million in reforestation projects and “climate [change] mitigation solutions,” according to a company statement.

Still, it’s challenging to track the progress Amazon is making on sustainability, because the company has yet to release numbers on key metrics, from its use of recycled packaging to its purchase of electric delivery vehicles.

The company received an F grade from the Carbon Disclosure Project watchdog group in 2020, which has routinely criticized its lack of transparency on climate efforts.

“Amazon works with manufacturers worldwide to help improve their packaging through our Frustration-Free Packaging certification program,” the company said in a statement.

The pandemic has amplified these shortcomings, as Amazon scrambled to meet the unexpected surge in demand for e-commerce, with cargo jets and its ubiquitous trucks making still more deliveries around the world and its cloud computing division all the more crucial to businesses forced to work remotely.

As a result, its environmental footprint keeps growing despite the measures it’s taking to reduce emissions and tap renewable energy sources.

Amazon indicated it’s five years early on its path to achieve the goal of powering its operations with 100% renewable energy, adding that it’s the largest corporate buyer of renewable energy globally, with a total of 232 renewable energy projects, including 85 utility-scale wind and solar projects and 147 solar rooftops on facilities and stores worldwide.

But it disclosed in 2020 that emissions from its business operations increased 15% from the prior year, to more than 51 million metric tons of CO2. In February, however, it began testing its new electric vehicles via customer deliveries in Los Angeles and has since expanded its use of EVs in a number of other cities, with the aim of putting 10,000 such vehicles on the road by 2022. Amazon also recently deployed 1,800 electric vans as part of its European delivery fleet.

Critics, including its own employees, have pressured the company to do more to revamp its business operations, noting that vehicle emissions from freight trucks coming and going from Amazon fulfillment centers are associated with asthma and other respiratory illnesses.

“Even as the United States government includes environmental justice as a critical part of solving the climate crisis at large, Amazon has yet to acknowledge that its pollution is concentrated in communities of color,” noted a spokesperson for Amazon Employees for Climate Justice.

And analysts say the pace may not be aggressive enough. “To reach that 2025 goal, they’ll have to accelerate renewable-energy project investment and developments far faster than global operations growth,” said Rhys Roth, executive director at the Center for Sustainable Infrastructure.

As for the sustainability of the millions of products it sells, Amazon recently expanded a program that marks items as Climate Pledge Friendly, if they are certified by at least one of several worldwide organizations focused on environmental issues; the company now offers more than 75,000 such products. Amazon also noted that the latest Echo and Fire TV devices released in October contain 100% recycled aluminum and fabric and 30% to 50% recycled plastic and feature a low-power mode to reduce energy consumption when the devices aren’t in use. The company has in addition expanded its program for repairing, recycling, and refurbishing its electronic devices.

Zeroing in on the supply chain

Amazon said it’s also focusing its sustainability efforts on its supply chain—the key components of a product’s life cycle from suppliers and product warehousing to inventory management and delivery. Supply chain emissions are estimated to make up 80% of its total carbon footprint.

The company said it’s reducing the environmental impact of its own Amazon-branded apparel by working with suppliers to find solutions that promote the use of sustainably produced cotton, leather, and cellulosic fibers as well as recycled materials.

And in the name of transparency, Amazon released a supply chain map showing the suppliers that produce its apparel, consumer electronics, food and beverage, and home goods items. In 2019 it conducted 4,082 assessments of suppliers as part of its due diligence, ensuring that they are adhering to Amazon’s standards. Amazon-owned Whole Foods, for example, was recently credited for taking “adequate measures to ensure sustainable agricultural business practices, e.g., regarding sustainable palm oil and aquaculture,” according to an assessment conducted by ISS Corporate Solutions.

“If our goal is to reduce the impact on the planet, we have to focus on product manufacturing and the supply chain upstream, which is a greater part of the carbon footprint than disposal,” said Roth. “And if Amazon can be a leader among the Climate Pledge signers, that is a really important step forward.”

Though Amazon has improved in recent years, it still ranks behind competitors, noted Roxana Dobre, an analyst for Sustainalytics, adding that Amazon does “not perform very well when it comes to ensuring that they have sustainable products they sell,” both in terms of eco design and use of materials.

Dobre also noted a recent controversy in Germany, where Amazon was caught destroying unsold electronics, among other items. And in June, the company made headlines when millions of items in a British warehouse, from new smart TVs to hair dryers, were marked for destruction.

“[The incident in Germany] was an isolated event, but it raises a lot of questions about whether Amazon is able to deal with E&S [environmental and social standards]. Because a lot of their peers are looking into implementing the circular business model,” she said.

Analysts note that Amazon’s sustainability policy has yet to focus on third-party sellers, the source of a majority of products on its platform.

The company could take steps to pressure those sellers by requiring “an accounting of the carbon footprint of anyone that sells on the platform, and Amazon’s algorithms could enhance and promote those that have a smaller footprint,” said Marquis. “The company could be more proactive in trying to shape consumers to make smarter choices, [and give] incentives to consumers to group certain orders into one delivery and one package and save 5% on their purchase, for example.”

In terms of packaging, Amazon set a goal in September 2020 of using 100% recyclable materials for its devices by 2023. Though it has not yet released an update on the progress it’s making to achieve that goal, Amazon said it had eliminated over 27 million plastic bags from its devices packaging in 2020. Still, the company was responsible for 465 million pounds of plastic packaging waste in 2019, according to a report from nonprofit ocean advocacy group Oceana, which also estimated that more than 22 million pounds of this waste was funneled directly into freshwater and marine ecosystems. Overall, more than 86% of the nearly 86 million tons of plastic packaging produced in the world each year is not recycled.

“[Amazon] could say, ‘We want to be totally plastic-free by a certain date.’ Think about the creativity and innovation that would spur in the world among their millions of sellers,” noted Marquis, comparing the company with an online marketplace such as Grove Collaborative, which is reducing its use of plastic by selling plant-based dishwasher pods and uses carbon offsets for every shipment it makes.

It’s laudable that Amazon has set such ambitious sustainability goals, according to Dobre.

“They’re acknowledging the issue and that they have a place at the table,” she noted. “But what they’re going to do with that is still unknown.”

Update, June 24, 2021: This article has been updated to include a statement Amazon provided after publication.