Why scooter startup Bird may be worth $2.3 billion–or more 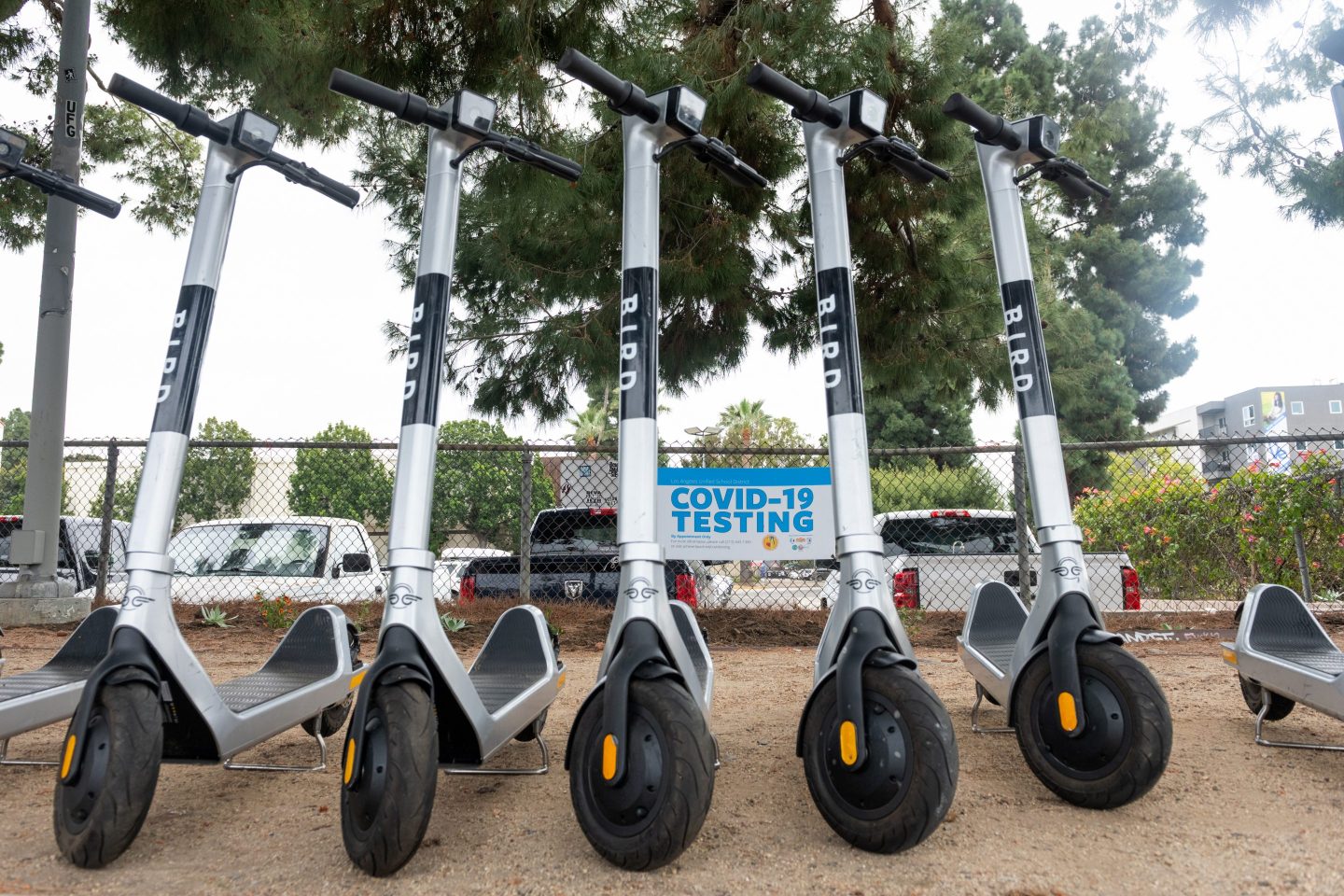 Scooter rental service Bird is going public by merging with a SPAC at a valuation of $2.3 billion.
Alexi Rosenfeld—Getty Images

For a little while, it seemed like some rationality had entered the world of special purpose acquisition companies, or SPACs—the recently popular and convoluted alternative to initial public offerings. But a quick review of the recent deal flow shows no such luck.

It’s still a SPACtacular world of hype and overvaluation. The true SPACpocalypse is yet to come.

This came to my attention thanks to a mistake I made in Wednesday’s newsletter. In writing about indoor farming startup Bowery Farms, I named a couple of other similar privately-owned agtech companies that don’t disclose their financials. Turns out one, AeroFarms, which is going public through a SPAC, recently disclosed its financials.

And, oh, what financials they are.

This year, AeroFarms expects revenue from its sales of lettuce, watercress, and other leafy produce from its single indoor farm in New Jersey to total $4 million. After expenses, it forecasts an annual loss before interest, taxes, depreciation, and amortization, also known as EBITDA, of $39 million. And yet in the deal to go public by merging later this year with Spring Valley Acquisition Corp.—SPACS always involve combining a company with a shell—AeroFarms will be valued at $1.2 billion. That’s an eye-popping 300 times revenue.

This being a SPAC merger, AeroFarms also provided a financial forecast (if it had filed for an IPO, the company wouldn’t have been allowed to disclose such guidance). It sees revenue racing to $553 million in 2026, producing EBITDA of $332 million.

Looks like an impressively fertilized growth forecast for the indoor farmer.

And the list of newly announced SPAC mergers continues to grow. Yesterday, consumer fintech startup Acorns said it would combine with Pioneer Merger Corp. Meanwhile, in the past few weeks, all the following companies also revealed plans for SPAC combinations:

But the biggest recent SPAC headline to me was scooter-as-a-service startup Bird agreeing to merge with Switchback II in a deal valuing the company at $2.3 billion. That big valuation is partly because Bird actually has a growing pool of customers in more than 200 cities. It’s also of note because this Data Sheet column from October 2019 still draws new clicks today: “Why Scooter Company Bird Is Worth $2.5 Billion.” (You’ll notice that the number in the headline is presciently close to the company’s current valuation).

COVID-19 lockdowns initially crushed Bird’s scooter rentals, but 2021 is looking much better. The company says it had $4 million in weekly gross revenue at the beginning of April, a zillion times more than the same time last year and almost triple what it did that week in 2019. After paying fees, it projects 2021 revenue of $188 million. While looking to expand into new cities, Bird is rolling out a new version of its proprietary scooter and an electric bike is “coming soon.”

The far bigger change is that Bird says it got its expenses under control during COVID. So its rides were actually profitable in 75% of its cities for the second half of last year, even during winter months and even factoring in depreciation of its scooter fleet.

The key was Bird having more gig workers manage its scooter fleet instead of employing its own workers, though the strategy has drawn some criticism over the risks those workers take. Under the revised economics, Bird now shares $4.17 of every $10 rental fee on average with gig fleet managers, but its own costs for running the fleets dropped from $10.83 to $1.55. Whereas before Bird lost an average of 83 cents on every $10 ride, it now makes a gross profit of $4.28. Prest-o, change-o, watch me pull a profit out of this scooter?

In terms of its forecast, Bird’s is at least based on pretty well-defined trends (and more reasonably, peers a mere two years into future). In 2023, the company’s expects revenue to exceed $800 million and adjusted positive cash flow of $144 million.

So while there’s a lot of overvalued dreck going public via SPACs, maybe this scooter maker is an exception. Data Sheet and other Fortune newsletters are off on Monday for the Memorial Day holiday, so we’ll see you back here on Tuesday. Have an easy ride into your weekend.

(Correction: This story was updated on May 28 to correct the location of Aerofarm’s initial location.)

Set fire to the rain. The Gates divorce has gotten uglier and that's stoking worries that the couple won't be able to manage the $50 billion Gates Foundation as easily as they have previously. Amid talk of a restructuring, foundation CEO Mark Suzman says the divorcing couple have “reaffirmed their commitment to the foundation and continue to work together on behalf of our mission.”

Turning tables. After the biggest hack ever of a pipeline operator, all pipeline operators will be required to conduct a cybersecurity assessment. The Biden administration wants to uncover any vulnerabilities in the nation's 2.7 million miles of pipelines and avoid further hacker attacks that could shut down the crucial energy viaducts, as happened recently to the Colonial Pipeline. In other cybersecurtity news, Microsoft says the Russian hackers behind the massive SolarWinds attack have gone after another 150 targets via emails purporting to be from the United States Agency for International Development.

Rumor has it. Controversial facial recognition service Clearview AI has already gotten roughed up by the New York Times. Now it's the regulators' turn to beat up the startup. On Thursday, the company was hit with complaints across France, Austria, Italy, Greece and the U.K., that its services violated the EU's General Data Protection Regulation, or GDPR.

Rolling in the deep. Billionaire investor Carl Icahn may throw some money into crypto like Bitcoin and Ethereum in a “big way." Though he hasn't bought anything yet, Icahn signaled he may soon. “I’m looking at the whole business, and how I might get involved in it,” he said in an interview on Bloomberg TV. Elsewhere in cryptoland, VC firm Andreessen Horowitz is raising a third digital currency-focused fund and wants to bring in at least $2 billion.

Don't you remember. On Wall Street, the pandemic-induced laptop boom showed no signs of slowing but still didn't quite match investors' heady hopes. Dell Technologies reported its revenue gained 12% to $24.5 billion, much better than analysts had expected. “There has been a substantial acceleration in digital transformation across the globe, and you can see it in our results,” CFO Jeff Clarke said. Dell's stock, already up 43% in 2021, was largely unchanged in pre-market trading on Friday. At HP, strong laptop and printer sales also fueled a not-quite-impressive-enough beat, as revenue rose 27% to almost $16 billion. HP's shares, up 31% this year, fell 6%.

Don't have enough things to worry about now that the pandemic is under control, at least in the United States? Some scientists worry that after the demise of the Arecibo radio telescope, the giant dish in Puerto Rico, we are vulnerable to a major asteroid striking the earth. Sarah Scoles reports for Scientific American.

Arecibo's radar efforts fell under the umbrella of “planetary defense”: the attempt to identify and prevent potential collisions between asteroids (and comets) and this planet, which, ideally, we would like to keep intact.

On any given day the likelihood is low that a space rock will devastatingly smash into Earth. But the consequences of such a catastrophe would be severe. And our solar system's history—planets pocked with craters, crashes on other planets in recent memory, huge objects hurtling through Earth's atmosphere and captured on dashcams—demonstrates the statistical truth that events unlikely to happen on any given day do happen, given enough days. That's why NASA has an entire office dedicated to the problem; why a slew of astronomical facilities gather preventive data; and why an upcoming space mission will demonstrate what earthlings can do if a space rock does come knocking.

But is it enough? With Arecibo and its radar out of commission, our planetary defense arsenal comes up short. The U.S. and other nations are assessing the risk, brainstorming new ways to stay ahead of the threat and formulating plans for what might come next.

A few great long reads I came across this week:

Computers Will Be Able to Read Images From Your Brain Within a Decade (OneZero)
The potential applications are both amazing and alarming.

A death in Cryptoland (CBC)
When the CEO of Canada’s largest cryptocurrency exchange reportedly died in 2019, it left over a quarter of a billion dollars of customers’ funds in limbo. While authorities investigated, one online sleuth decided to dig deeper to find the money.

The Absolute Best Way to Cook a Hot Dog, According to So Many Tests (Food 52)
Spiral-cut? Boiled in beer? Microwaved? Columnist Ella Quittner sets out to find the ultimate hot dog.

My Conversation With Haruki Murakami Never Really Ends (Inside Hook)
Sean Wilsey chats with the prolific novelist about music, racism, and a writing process that never stops evolving.

Who would we be if we had never ‘forgotten’ the Tulsa Race Massacre? By Ellen McGirt

I am a pretty fast reader but it still took me only two nights to race through Zero Fail: The Rise and Fall of the Secret Service, the new book by Carol Leonnig, an investigative reporter for the Washington Post. Leonnig broke many of the crazy scandal stories about the Secret Service over the past decade. Remember the one about hiring prostitutes in Colombia the night before a presidential visit? That was Leonnig. In her book, she traces the rise of the service in the wake of Lincoln's assassination and the subsequent murders of more presidents through JFK, the attempts on our most recent commander-in-chiefs, and the utter chaos in the White House of the Trump years. A history that's also a fast-paced thriller? Don't miss it.