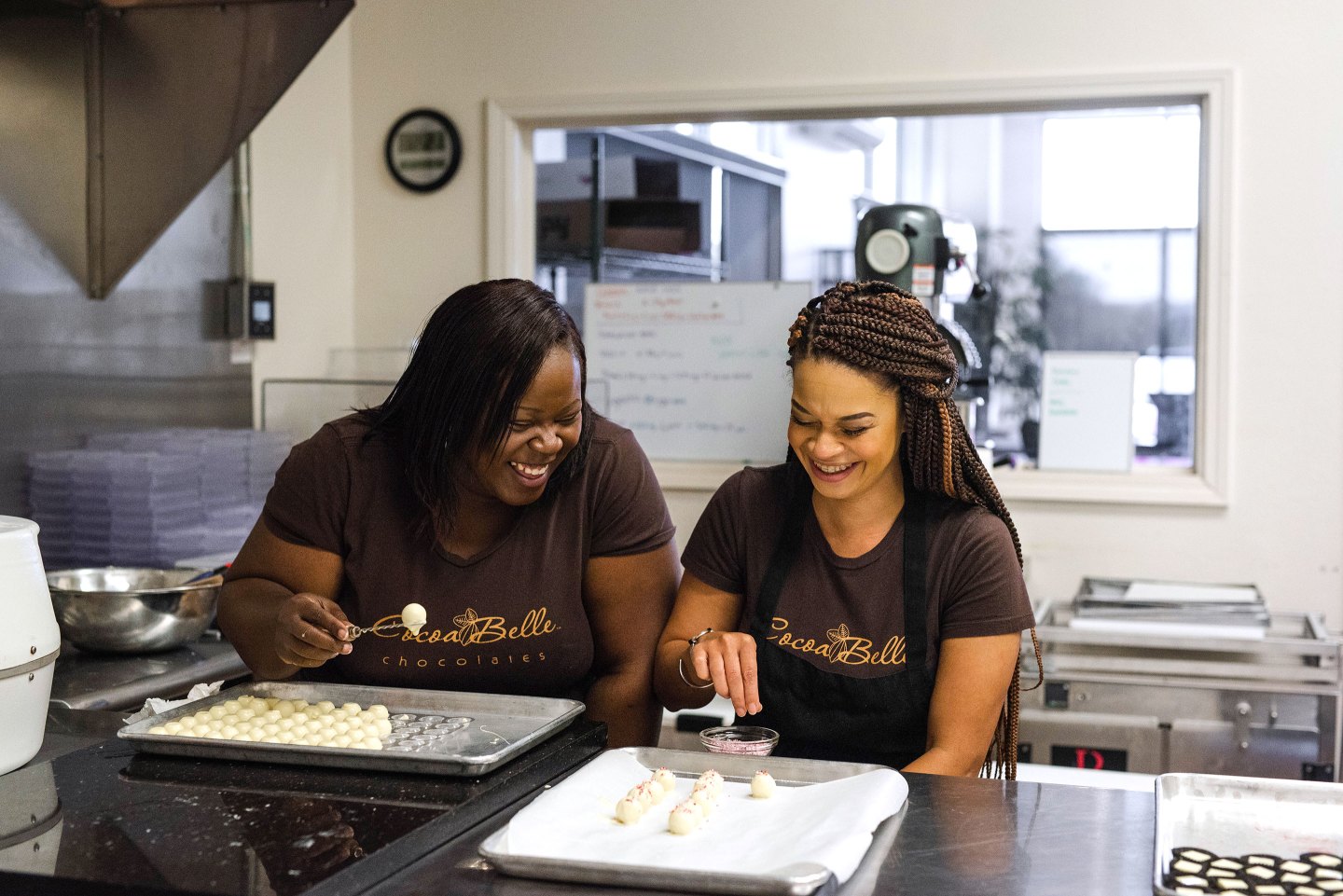 Our collective resolve continues to be tested in the COVID-induced economic crisis. We are grappling with the loss of vibrancy and humanity that small businesses bring to our communities.

The pandemic has laid bare a 40-year slow decline in American entrepreneurship. Over that time, we have lost our understanding of what it takes to build a successful small business.

The one-in-a-million tech entrepreneur grabs headlines. But our relief efforts should focus squarely on helping the vast majority of American founders.

They are people like Carmen Portillo, whose business is hurting now. She fell in love with fine chocolate at age 19, while traveling in England. She got over a bad breakup with the help of her obsession. The business she started after she came home, Little Rock–based Cocoa Belle Chocolates, saw her become the first certified chocolatier in Arkansas. “I’d never known that chocolate like that existed…exquisite, beautiful,” she told us.

The vast majority of entrepreneurs still work at the grass roots. They start shops, restaurants, and professional firms—today, adapted for a remote reality.

Together, small businesses employ nearly half the labor force and generate nearly 40% of annual GDP.

But consider that even before COVID, 29% of small businesses were unprofitable, and 47% had two weeks or less of cash, the JPMorgan Chase Institute found in a 2019 study. From 1998 to 2014, small businesses’ share of GDP fell from 48% to 43.5%, according to the Small Business Administration.

While applications to start new businesses rebounded in the second half of 2020, new companies will find a tough environment. Since the mid-1980s, the number of firms that close every year has been rising, sometimes faster than the number that open.

One reason is the lack of access to capital. The number of banks has declined to 5,000 from 14,400 in 1994. There is a huge disconnect between today’s entrepreneurs and the largely white men who run finance and whose energies focus on big companies or hunting unicorns. Today, 80% of small businesses don’t get bank financing to start, much less venture capital, which funds less than 1% of all businesses.

We live with a lot of illusions about small businesses. One is the illusion that our small-business economy is thriving. Another is that grit is the main ingredient for success. If that were true, today’s founders would find their paths easy.

In 2007, after attending confectionary school, Carmen bootstrapped, opening a 300-square-foot market stand. Cocoa Belle failed in its first iteration. “When gas is $4 a gallon, [people are] not going to spend $20 on nine pieces of chocolate.”

But she kept afloat with a few wholesale clients among businesses, and a few years later relaunched a retail operation. This time, she got financing from an institution, Arkansas Capital Corp. That relationship helped her survive 2020.

Right now, despite the groundswell of support for companies like Carmen’s, federal and state policymakers focus on tech companies, aiming to replicate Silicon Valleys. For instance, states chose to spend a third of the $1.5 billion in an Obama-era program for small businesses to establish government-supported venture capital. A current proposal increases that program to $10 billion.

Abundant government aid to tech businesses—which are likely to get private sector funding as well—increases inequality. This is the wrong path. Likewise, aid for tech companies started by women and people of color is laudable, but will help only a few people.

The tech obsession crowds out better ideas to spur a broader recovery. One of those is to increase funding for community development finance institutions, like the one that helped Carmen. Another is to reexamine banking regulations, which stabilized large banks after 2008–09, but hurt small and community banks.

The government can also continue innovation in equity investment regulations to enable people to invest in neighborhood businesses. And it should solve the “thin-credit” problem, where lenders don’t extend capital because a new business doesn’t, by definition, have a track record.

When COVID-19 hit, Carmen lost a wedding, a shareholders meeting, and a hotel opening all in the same week. “That was thousands of dollars for us,” she said. But she’s holding on, and as the world reopens, she plans to be there. Long after her fateful trip to England, Carmen still loves chocolate. “The day I don’t love it is the day I quit doing it,” she said.

The fast growth promised by tech is mostly an illusion, because it’s narrow. We need a broad-based recovery, not one that only boosts a handful of companies. The same way Carmen builds her boxes of chocolates, piece by piece, is the same way we rebuild a better economy: business by business.

Seth Levine and Elizabeth MacBride are the authors of the forthcoming The New Builders: Face to Face With the True Future of Business, which will be published on May 4. Levine is a partner and cofounder of the venture capital firm Foundry Group and MacBride is an award-winning business journalist.