The dual symbolism of Harris and Pelosi’s history-making night 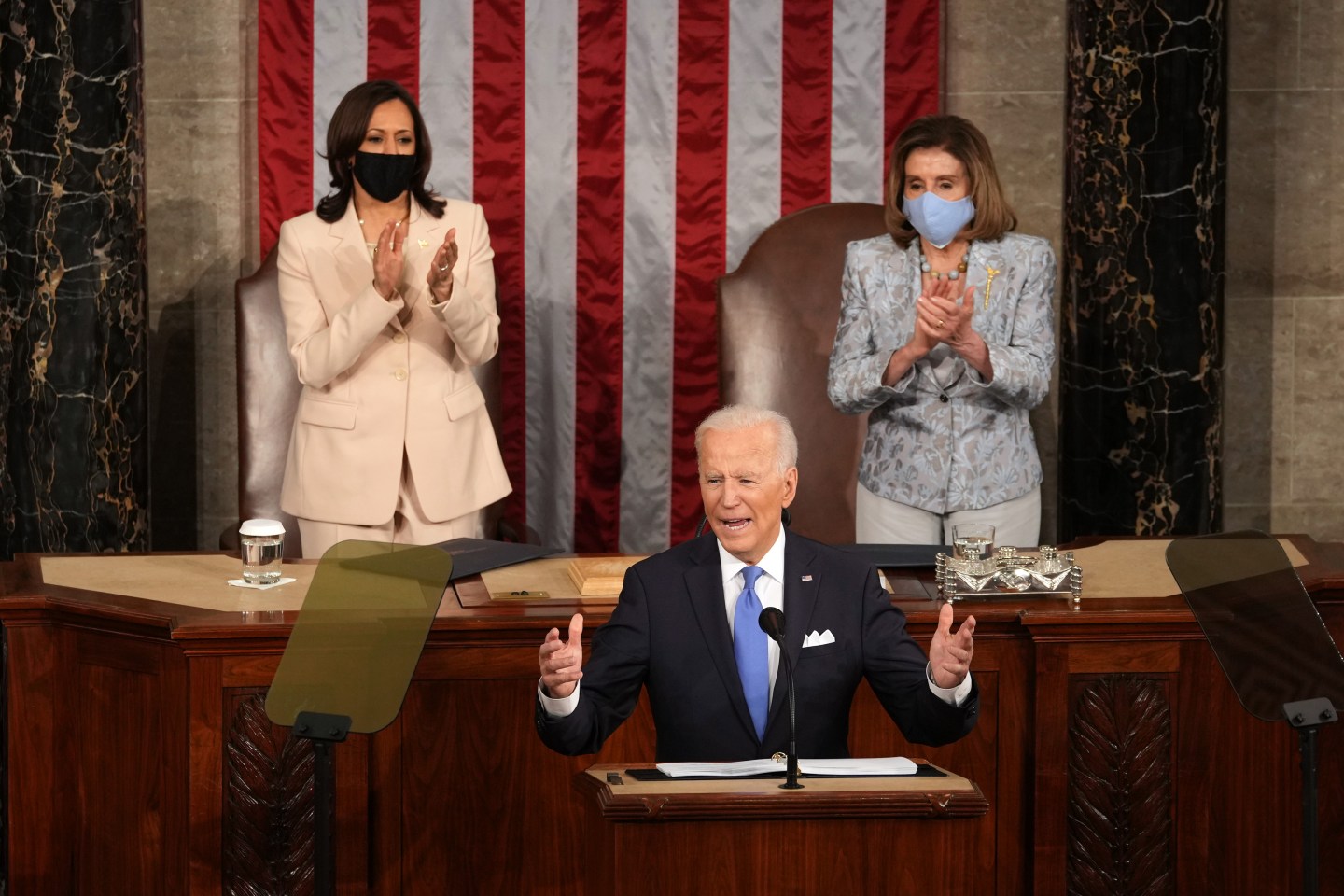 – ‘It’s about time.’ The first 100 days of the Biden administration has been full of firsts and last night was no different.

During President Joe Biden’s speech to Congress, two women—Vice President Kamala Harris and Speaker of the House Nancy Pelosi—assumed the seats usually designated for the government’s No. 2 and No. 3 officials for the first time.

Harris and Pelosi greeted one another on the dais by clasping hands and exchanging an awkward elbow bump.

“Madam Speaker. Madam Vice-President,” Biden said at the start of his address. “No president has ever said those words, and it’s about time.”

“I am extremely excited that all of America’s daughters—and our sons—will be able to see two strong, powerful women, including a Black woman, occupying the dais with the President of the United States,” Rep. Val Demings (D–Fla.) told USA Today. “When a child sees something for the first time, it becomes achievable in their mind. We should not discount how powerful this moment will be.”

“It’s critical that girls across the country see women at the highest levels of government and know that they too can serve as Vice President and Speaker of the House,” said Sen. Cynthia Lummis, a Republican and the first woman from Wyoming to win a Senate seat.

But to some, the vignette was a reminder of what’s left to achieve. “We’ve come a long way in a short time, but it will mean even more when we finally have a woman president addressing Congress,” said Sen. Dianne Feinstein (D–Calif.).

Washington Post opinion columnist Christine Emba argued that the scene reinforced how women in politics have been relegated to supporting roles. “And yet, for their troubles, there the women stood in their nonthreatening pastels: cheering Joe on from the back, masked and silent while he spoke.”

Harris, for her part, seemed determined to cast the moment as nothing out of the ordinary. When asked about the significance of two women sitting behind Biden, Harris told reporters it was “normal.”

The image of Harris and Pelosi on the dais can, of course, be both things at once; an achievement worth celebrating and just one milestone on the ongoing march toward a female presidency.

- Hey, big spender. In his speech to Congress last night, President Biden bet that America is ready to invest even more in itself. He ticked off his legislative accomplishments so far and proposed a new $1.8 trillion plan that would shore up education, child care, and paid family leave. Fortune

- Lost income. A new report from Oxfam International puts an eye-popping number of the amount of income women have lost in the pandemic: at least $800 billion, which is equal to the combined GDP of 98 countries. Oxfam says that's a "conservative estimate" since it doesn't capture the wages lost by women in the informal economy. CNN

- SAG takes on sexual harassment. SAG-AFTRA, the union representing Hollywood performers and news broadcasters, has a new initiative to address sexual harassment in the industry and support performers. The union is unveiling features that let members report harassment via an app and web portal, and is introducing a training and accreditation program for intimacy coordinators. SAG-AFTRA president Gabrielle Carteris talks to Fortune about the news. Fortune

- Cover up. Does gymnastics need the leotard? At a recent competition, German athletes wore less-revealing full-length unitards rather than the standard attire. The gymnasts say their clothing was a statement against "Sexualisierung," or sexualization, in the sport. Slate

MOVERS AND SHAKERS: Marie-Josée Kravis, president emerita of the Museum of Modern Art, will become its chairman after the exit of investor Leon Black, who has faced scrutiny for his ties to Jeffrey Epstein. Banker Shriti Vadera will be chair of the Royal Shakespeare Company, the first woman or person of color to hold the role. Mary O'Connor, who led KPMG U.K. as acting CEO this year, will depart the firm after being passed over for the permanent CEO job. Whip Media promoted chief revenue and strategy officer Carol Hanley to co-president. Rhia Ventures hired Erika Seth Davies, founder of the Racial Equity Asset Lab, as CEO. Maggie Wilderotter joined the boards of TripActions and Legends Hospitality. Uber named Caitlin Donovan head of Uber Health.

- Party revolt. Arlene Foster is stepping down as leader of the Democratic Unionist party and Northern Ireland’s first minister after facing an internal party revolt. The party members who pushed for her ouster are seen as trying to avoid voter backlash against the unpopular Northern Ireland protocol agreed to as part of the EU-U.K. Brexit deal; Foster was a strong supporter of Brexit. Guardian

- Bishops v. Biden. U.S. Catholic bishops are considering declaring that President Biden and other Catholic politicians who support abortion rights should not take Communion. Biden, who attends Mass regularly, is only the second Catholic President and is the first to publicly support reproductive rights. AP

- NYC allegations. Scott Stringer, city comptroller and a progressive candidate for NYC mayor, has been accused of sexual harassment. Jean Kim worked on a Stringer campaign in 2001, and says that the politician sexually harassed and groped her. Stringer says they had a consensual relationship. Wall Street Journal

‘Floyd was my man. But George Floyd is a movement' Washington Post

"I want to make a lot of women a lot of money."

-Reese Witherspoon on the motivation behind her production company and growing media empire, Hello Sunshine