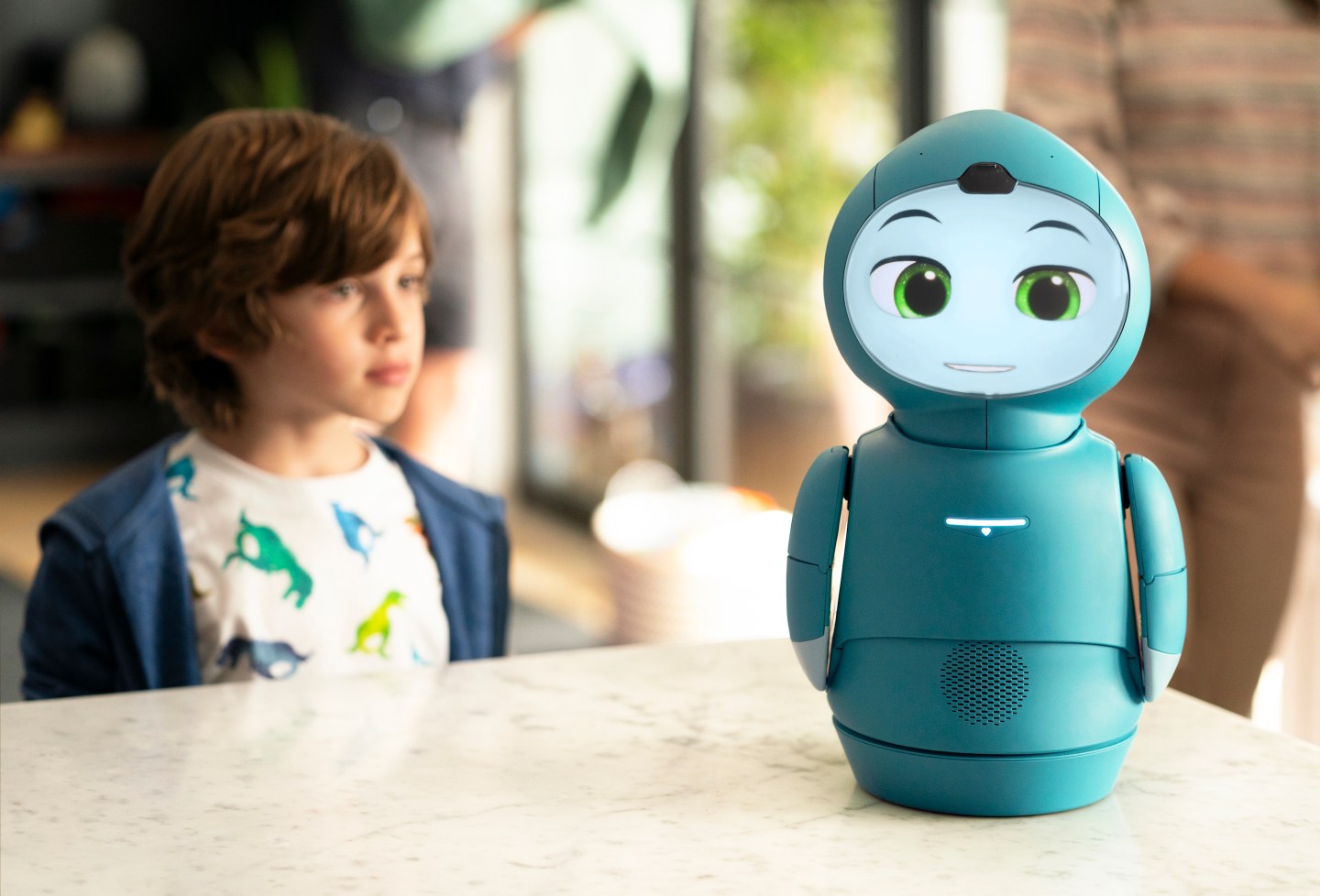 Moxie is an adorable robot that helps kids with social and emotional development skills and was named one of TIME's Best Inventions of 2020.
Courtesy of Moxie

From the province of science fiction to a pervasive technological reality, robotics today has undeniably powerful market potential. The question now is not whether robots and humans should coexist—but to what extent. Plenty of robotic tools have seamlessly been integrated into our daily lives without much of a second thought: the Roomba (also known as an unintended vehicle for cats), is perhaps the most mainstream example. But there are others: household companions like Aibo, vocal assistants like Alexa, and self-driving vehicles, all of which are familiar, widespread concepts.

For roboticist and former NASA scientist Paolo Pirjanian, CEO of the robotics and A.I. company Embodied, Inc, the next big wave will be powered by human-machine interfaces with social and emotional intelligence. That very well may begin with the company’s first innovation: Moxie, named one of Time’s Best Inventions of 2020.

“We wanted to start where we could have the most impact and that’s with children,” says Pirjanian, from his home in California.

Founder Paolo Pirjanian is a roboticist who previously worked at NASA and iRobot and sits on the board of Happiest Baby, maker of the Snoo bassinet.
Courtesy of Moxie

An “animated” companion designed to help children build social and emotional skills through play-based learning, Moxie runs on SocialX, a proprietary platform developed by Embodied which enables users (in this case kids aged five to ten) to engage with the tool through natural interactions such as facial expressions, speech, and body language. In turn, the machine learning technology fueling Moxie (plus microphones and cameras in the tool’s head collecting the data) allows it to process and react believably to the child’s behavior, remember people, places, and things, and carry on fluid conversations.

The more a child engages with Moxie, the more it adapts to their individual developmental and learning needs. Gradually, both the interactions and conversational content become more complex. In testing, the possibility for realistic social exchanges proved particularly beneficial for neurodivergent children who struggle with expressing and interpreting emotion and sustaining eye contact.

Still, Pirjanian insists that Moxie is suitable for neurotypical children as well.  “If you have a child that has been socially isolated for any reason and they don’t have the opportunity to improve their skills, Moxie is a tool that can step in and assist.” It would have been a helpful ally, he went on to explain, through a period of great disruption in his own life.

With a wait list of more than 10,000 people, Moxie began shipping units to families this year.
Courtesy of Moxie

The Armenian-born innovator fled Iran as a teen and found himself in a refugee camp in Denmark, displaced and disconnected socially. “I stood out as a foreigner and felt singled out, to the point where I didn’t want to attend school. I was a strong student before that but I started ditching for a time as a result of my isolation.” It was during this turbulent time that sixteen-year-old Pirjanian saw his first Pixar animation and experienced what he considers a revelation. “I couldn’t believe my eyes. I asked myself how a computer could create such emotion,” he said.

Once he bought his own computer and taught himself to code and animate, he reshaped the trajectory of his academic and professional life. After fifteen years as a pioneer in what he calls, jokingly, “robotic floor care”, he went on to pursue mission-driven development with Embodied, hoping to redefine the way machines interact with humans for their well-being.

Designed in collaboration with fuseproject’s Yves Béhar, one of Pirjanian’s longtime creative partners, Moxie’s teardrop head and curved face, large joyful eyes, tilting frame, and youthful voice are key to its believability as a character that appeals to children. From there, it’s the creative play that Moxie offers that is instrumental in the learning progress. Reinforced with positive affirmations, a host of activities—drawing, storytelling, problem-solving, reading, conversation, and even breathing exercises and meditative practices—help children develop crucial cognitive and life skills.

Moxie’s holding company, Embodied, is in talks with a major hospital to pilot a program for pediatric patients.
Courtesy of Moxie

Ashley Nanayakkara, a middle-school teacher in Northern California, joined Moxie’s pilot program at the end of 2020 in the hopes of helping her five-year-old son Ansel better manage his emotions. “He goes from zero to 60 super fast, with no communication before the meltdown. It’s a constant power struggle for me and my husband to get him to do the things Moxies teaches, like deep breathing and conversations about feelings,” she explained. “None of those things were brand new for us but Moxie brought it into the household in a neutral way.” Soon, they noticed they were better able to address their son’s challenging moments using Moxie’s techniques.

The company even joined forces with Merriam-Webster to incorporate a dictionary into Moxie’s software, expanding its knowledge base in order to consistently teach the child age-appropriate words and ideas.

“One of our key strategies has been around content, borrowing from child therapy and child development but wrapped in fun and playful activities,” explained the CEO, adding that without such a focus, the novelty will wear off once the child figures out the functionalities and the tool could end up collecting dust. Backed by a team of neuroscientists, creative storytellers and child development specialists, continuous software and content updates keep Moxie fun and relevant to users. The subscription plan also includes printed materials dispatched monthly that recommend activities to pursue with Moxie while parents can track their child’s progress through a smartphone app.

“We’ve chosen to build massive volumes of content and have employed people from Pixar, Jim Henson, and Disney who know how to make entertaining and useful content,” he said. That means Moxie weaves in history, math, science topics into conversation but is also capable of responding to themes initiated by the child. “My son told Moxie he played with dinosaurs and Moxie engaged him on all sorts of facts and stories about dinosaurs; the knowledge was incredible,” Nanayakkara recalls.

Moxie’s play-based content has become even more critical with so many kids remote learning and away from social environments for the past year due to the pandemic.
Courtesy of Moxie

When pressed on privacy and security, not only with the data Moxie takes in but with respect to the content children are exposed to, Pirjanian acknowledged Embodied’s role in responsible use. “It takes time to build trust with consumers. Even with self-driving cars, we’re gradually adding those functionalities, such as automatic braking, into regular cars.”

In this case, parents must consent to their child’s use of the tool while the company insists it only has access to collective and anonymous data from its robots in circulation. If there are thematic areas the tool has not yet mastered, Moxie refers the child to an adult. “We filter conversations that are even marginally sensitive, like religion for example, and have integrated responses that encourage the child to speak to an adult. We’re not trying to replace the parent,” he says.

All of this high-powered technology comes at a cost, of course. The first batch of Moxie robots shipped to buyers in March for nearly $1,500 (a monthly subscription of around $40 kicks in after the first year), more affordable than most robotics but, Pirjanian admits, still not affordable for 90% of the population. He sees it as a therapeutic alternative, a parental sidekick. “You could pay for a therapist for your child, the cost of which adds up especially if it isn’t covered by insurance. Parents are struggling to do it all and that adds emotional distress within the family.”

Much in the way that the Snoo smart baby bassinet, another high-end innovation (whose founder sits on the board of Embodied), is being tested widely for use in hospitals and in companies as employee perks, Pirjanian’s goal is to broaden Moxie’s reach through schools and hospitals. He’s off to a good start: Embodied was selected as one of only 13 innovative start-ups to join the inaugural cohort for KidsX, an international accelerator pairing leading pediatric hospitals focused on improving digital health innovation through collaboration with early-stage digital health companies. Throughout the program, Embodied will partner with healthcare organizations to test Moxie’s success within pediatric healthcare.

“Technology can create a connection with people at such a deep level,” Pirjanian says. “My mission now is to further that for the greater good.”