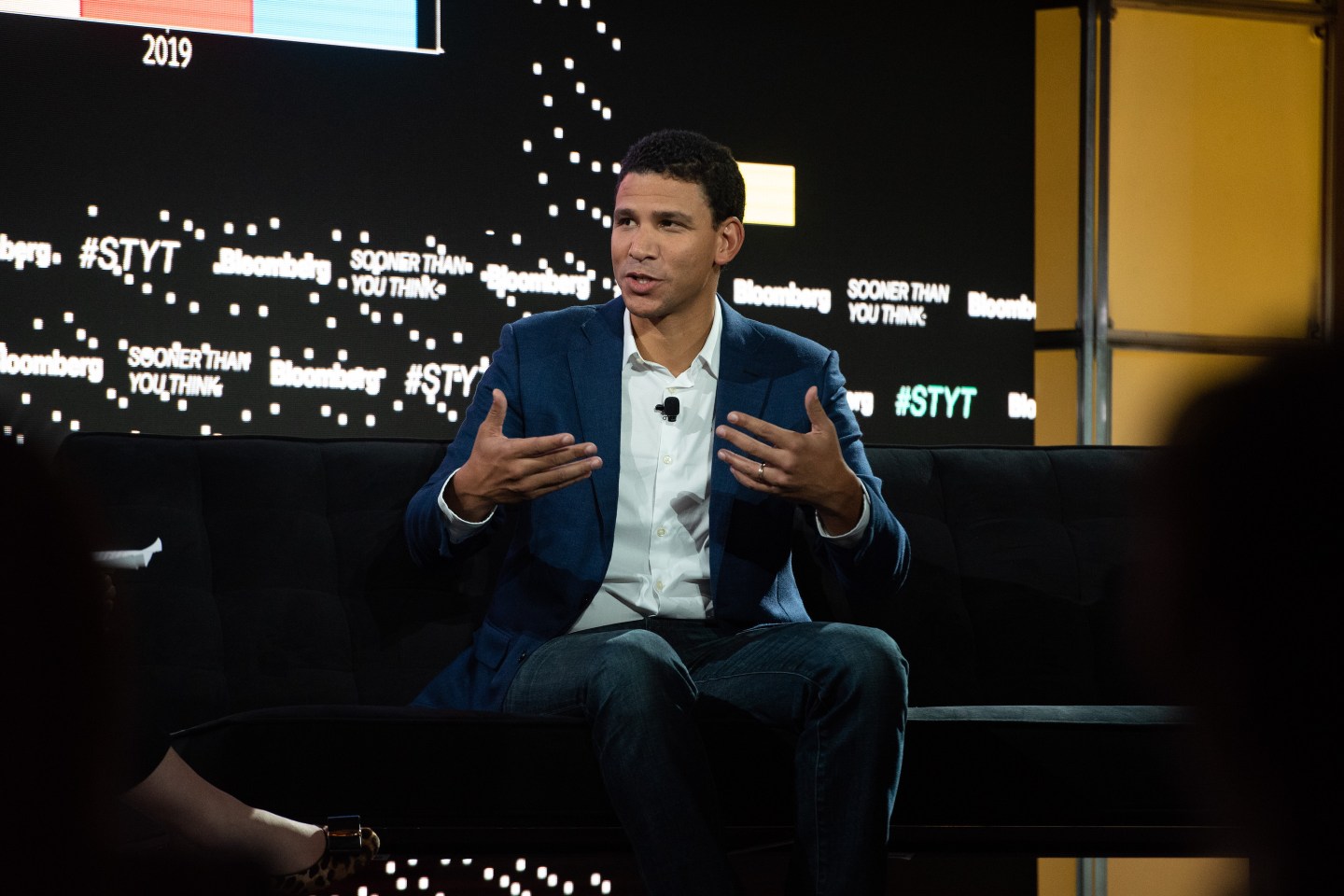 Robert Reffkin, founder and chief executive officer of Urban Compass Inc., speaks during the Power of Data: Sooner Than You Think global technology conference in the Brooklyn borough of New York, U.S., on Wednesday, Oct. 30, 2019.
Cate Dingley/Bloomberg via Getty Images

Compass Inc. Chief Executive Officer Robert Reffkin started his career working in the inner sanctums of American power, from McKinsey & Co. to the White House to Goldman Sachs Group Inc. But it was a real estate startup that vaulted him to the ranks of the ultrarich.

Compass, the tech-focused brokerage that Reffkin co-founded in 2012, raised $450 million in an initial public offering Wednesday. The sale was cut in half from the company’s prior target as tech shares sank this week, and it priced at the low end of a reduced range with investor enthusiasm waning for high-flying startups that got a boost from COVID-related demand.

Now Reffkin, whose company has yet to turn a profit, must show that his investments in tech talent can justify Compass’s roughly $7 billion valuation.

“It’s been a very challenging market environment, I’m very happy we were able to realize our goal successfully,” Reffkin said in an interview. “The goal was never a valuation — the goal was a successful capital raise and with today’s IPO we’ve raised hundreds of millions of dollars from great investors.”

Fueled by funding from SoftBank Group Corp., the New York-based firm has grown into the second-largest brokerage in the U.S. It has benefited from a pandemic-driven housing boom and soaring investor demand for real estate-related technology.

But skeptics say it has yet to differentiate itself from traditional real estate companies or create a path toward making money. Reffkin said the new capital from the IPO will help the company turn a profit.

“We have a clear path to profitability,” Reffkin said. “We’re still going to grow fast, but we’re growing more efficiently.”

Reffkin’s roughly 6% stake in Compass is valued at $472 million at the IPO price. He stands to receive another 14.9 million shares in coming years contingent on tenure and share performance, which would boost his stake by about 50%.

That makes him one of corporate America’s wealthiest Black entrepreneurs, and one of only three Black founders to have taken their venture-backed companies public in the last decade, according to Crunchbase.

Compass recorded $270 million in losses last year, even as its revenue soared 56% to $3.7 billion. Realogy Holdings Corp., owner of the Coldwell Banker and Century 21 brands, has almost twice the annual revenue and a market value of just $1.8 billion. The company was valued at $6.4 billion in its last funding round in 2019.

“There’s no doubt that the growth has been extraordinary,” Clelia Warburg Peters, a venture partner at Bain Capital Ventures, said of Compass. “Is that a sign of innovation, or a sign that Rob brought investment-banking style aggressiveness into a sleepy industry?”

Reffkin, 41, describes Compass as a company designed to elevate real estate agents, who work as independent contractors under its brand. In a letter to potential investors, he said the group is “remarkably underserved,” despite playing a central role in the $2 trillion U.S. housing industry.

He was inspired by his mother Ruth, a single parent who supported the family by working as a real estate agent. She “didn’t have the right tools or support” to build her business, he wrote.

Reffkin’s early career, by contrast, was marked by a procession through America’s most storied institutions, including Columbia Business School, the Obama administration and a stint at Goldman, where he served as chief of staff to Gary Cohn, the bank’s president at the time. He founded a nonprofit called America Needs You, to help first-generation college students, and ran marathons in all 50 U.S. states to raise $1 million for charities.

In 2012, as tech was emerging as alternative to Wall Street as place for the young and ambitious to seek riches, Reffkin and Ori Allon, a software engineer who had sold his previous startups to Google and Twitter Inc., decided to launch a company together, going on to raise money from the likes of Josh Kushner’s Thrive Capital and former American Express Co. CEO Ken Chenault.

Armed with capital, Reffkin and Allon hit on a two-pronged approach. Compass hired coders to build software to help its agents run their businesses more efficiently. Over time they assembled a staff of 650 product and engineering professionals and hired a top artificial intelligence executive from Microsoft Corp.

Compass also dangled rich incentives to recruit agents from competitors, offering top performers stock options and the opportunity to keep a greater share of their commission revenue. At the same time, the company went on a buying spree as it ramped up its business in San Francisco and other markets.

Its critics say that Compass acquired growth without demonstrating the ability to improve margins and it will need to reduce compensation — and risk alienating agents — in order to profit. Doubts about its strategy grew loud enough that Chief Financial Officer Kristen Ankerbrandt penned a companywide email highlighting eight ways the company wasn’t like its fellow SoftBank-backed real estate startup, WeWork.

Reffkin’s rise is notable in other ways. Black Americans are strikingly underrepresented among the ultrawealthy. Out of the 156 Americans ranked on the Bloomberg Billionaires Index, only one — private equity magnate Robert Smith — is Black.

“It’s a long journey for any CEO and, candidly, it is much longer and more arduous for CEOs of color,” said Tyler Scriven, who leads the startup Saltbox. “Robert, having successfully brought such an incredibly ambitious company to market, provides one the best such examples that we’ve seen in generations.”

—With assistance from Anders Melin.