Weight rooms, swag, and the ‘March Madness’ brand: How the NCAA is shortchanging women’s basketball 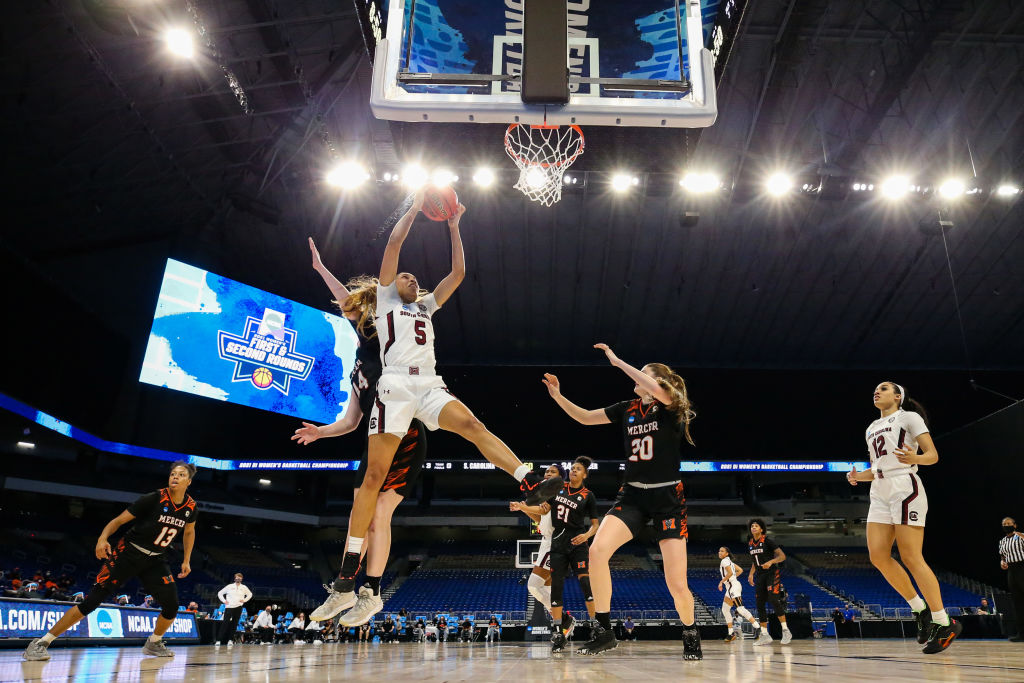 – Competitive disadvantage. After a year with no NCAA tournaments, Americans and college basketball fans across the world were thrust back into March Madness this past weekend as men’s and women’s play got underway. Underdogs triumphed, brackets were busted, and I suddenly found myself deeply invested in the outcome of a game between Texas and Abilene Christian, a school I’d never heard of. (The Longhorns fell victim to the upset, 53-52). The action did not disappoint—but the inequality between the men’s and women’s tournaments surely did.

It all started on Thursday, when Stanford sports performance coach Ali Kershner tweeted about the disparity between training equipment given to women’s teams—some yoga mats and a tower of dumbbells—and the men, who had access to a state-of-the-art weight room. Initially, the NCAA blamed “limited space” in San Antonio’s convention center, which measures 514,000 square feet. Later, Lynn Holzman, the NCAA’s VP of women’s basketball, apologized for “[falling] short this year,” and the organization upgraded the women’s facilities, adding strength machines and other gear.

But there were disparities in other resources too, like food, swag bags, and COVID tests.

Parsing these types of differences always prompts scrutiny of tournament revenue. There’s no doubt the men’s tournament mints money. Its 22-year TV deal alone is worth $19.6 billion. Meanwhile, ESPN paid $500 million over 14 years to broadcast the women’s tournament as part of a bundle of 24 other sports championships.

But the popularity of the women’s game is skyrocketing. In-person attendance was on the rise pre-pandemic, superstars like Sabrina Ionescu elevated the sport’s profile, and TV viewership is up; more than 3.6 million people watched the 2019 championship, a 24% increase from 2016.

Still, it seems the NCAA is not doing all it can to promote the women’s game. As The Wall Street Journal reports, women’s teams take home zero dollars for a run in the tournament, while a 2019 tournament appearance for a men’s team earned the team’s athletic conference at least $280,000, with the payments coming over six-year rolling periods.

Holzman told the Journal that discussions about giving women’s teams a similar bonus had not yet reached “the level” of governing bodies that could institute such a change.

What’s more, the NCAA is withholding a benefit that could increase the value of the women’s tournament at little—or no—cost. The association for years has reserved its powerful ‘March Madness’ brand for the men’s tourney, even though its trademark for the moniker extends to women’s games. The NCAA told the Journal it would consider using March Madness logos as it determines “the best way forward for women’s basketball.”

All this would sting in normal years, but it’s especially painful coming at the end of a season in which the NCAA has championed equality and togetherness. Dawn Staley, South Carolina’s celebrated coach, called on the organization to do better: “It is…time for the NCAA leadership to reevaluate the value they place on women.”

- Tragedy in Colorado. Former Congresswoman Gabrielle Giffords weighed in on yesterday's shooting in Boulder, Colorado, which killed 10 people—reminding us that she, like the victims in Boulder, was also shot at a grocery store. "This is not normal," she said. Boulder Police Chief Maris Herold said her department is working as quickly as possible to reach families of the victims before sharing more information. CNN

- Inside Pinterest. What does the reckoning at Pinterest say about sexism and racism in Silicon Valley? The experiences of Françoise Brougher, Ifeoma Ozoma, and Aerica Shimizu Banks at the tech company intersected in ways that shed some light on the future of the industry. Time

- Single parents band together. Rep. Nancy Mace, a South Carolina Republican, is in her first term in the House of Representatives. She's already making changes: she formed Congress's first Single Parents Caucus for members who are raising kids on their own. Congress approved Mace's request for the caucus this week, and she's invited Reps. Katie Porter, Cori Bush, and Beth Van Duyne to join her. The State

- Rising star. In conversation with Gayle King, CNN reporter and anchor Abby Phillip talks about her rise in television news, her priorities as a journalist, and becoming a mom; her first child is due this summer. "It has been a reminder of what I am capable of," she says of her pregnancy, "and what so many women do every day." The Cut

- 'Revolting' scandal. The scandal over sexual harassment in the Australian government reached a new low this week, with allegations that male staffers masturbated on desks belonging to female members of Parliament. Tanya Plibersek, shadow women's minister for the Labor party, called the allegations "extraordinary" and "revolting." Guardian

- Soccer scores. BBC and Sky Sports signed a £8 million annual deal for broadcast rights for the Women's Super League—a landmark moment for women's soccer. The deal is the largest for any women's league in the sport in the world. Guardian

- Draft decision. The Supreme Court will soon hear a case in which it will decide whether to allow a U.S. military draft that only applies to men. Lawyers for the American Civil Liberties Union are drawing on the legacy of the late Justice Ruth Bader Ginsburg as they argue against a gender-specific law that both "imposes selective burdens on men" and "reinforces the notion that women are not full and equal citizens." New York Times

- FCC rules. Jessica Rosenworcel stepped into her role as acting chief of the Federal Communications Commission understanding the magnitude of the task ahead: "We've been handed some problems to solve," she says. The FCC's mandate right now includes balancing regulation of a recent multi-billion-dollar investment in 5G technology with ongoing work to ensure broadband access in rural America as students and employees struggle to work from home. Wall Street Journal

"Can you imagine the reaction if I had said that?"

-Marianne Williamson, responding to Elon Musk on Twitter. The billionaire said he was "accumulating resources to help make life multiplanetary & extend the light of consciousness to the stars."