China has secured 100 million doses of BioNTech’s vaccine. Why hasn’t it approved the jab yet? 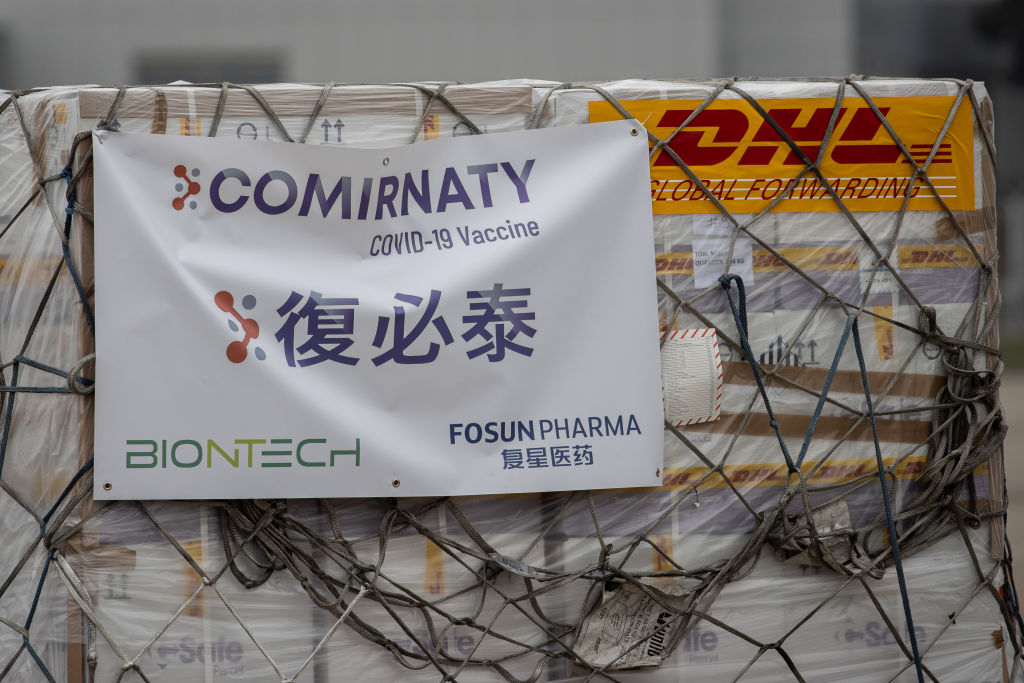 Chinese authorities have yet to approve the COVID-19 vaccine produced by German maker BioNTech and distributed locally by Chinese firm Fosun Pharma. The delay means China can’t access 100 million doses of the proven and effective COVID-19 vaccine it has procured as the country ramps up an ambitious effort to inoculate hundreds of millions of people at home and abroad in coming months.

Since first releasing data last November, BioNTech’s mRNA vaccine has become the gold standard of COVID-19 vaccines. BioNTech and Pfizer, the U.S. pharmaceutical giant and BioNTech’s distribution partner outside China, said it was 95% effective in preventing COVID-19 infections, a claim that was later backed up in both peer-reviewed medical journals and in real-world outcomes.

Some 72 countries have approved the BioNTech vaccine, and it was the first COVID-19 vaccine authorized for use by the World Health Organization (WHO) in December. But China has remained a notable holdout in granting approval for the jab even though Fosun secured over 100 million doses last December to deploy in the Chinese market.

In a December statement, Fosun said the vaccines initially will be manufactured in Germany, though the two sides reportedly have been in talks to build an additional manufacturing facility in China.

Approving BioNTech’s vaccine could help speed up China’s vaccination campaign and ease supply constraints on other Chinese manufacturers. But Beijing may see unleashing a foreign-made vaccine domestically as undermining the interests of China’s own homegrown competitors.

In most of the world, BioNTech is partnering with Pfizer to distribute its COVID-19 vaccine. In mainland China, Hong Kong, Macau, and Taiwan, BioNTech is instead relying on Shanghai-based Fosun, according to a deal struck in March 2020.

BioNTech and Fosun’s partnership has been rocky in Taiwan. Beijing and Taipei have provided conflicting accounts of why Fosun and BioNTech haven’t struck a deal to supply the island with the vaccine, despite Taiwan’s interest in the shots.

But the pairing has proved fruitful elsewhere.

In January, Hong Kong authorities approved the vaccine for use in the city, citing data shared by BioNTech and recommendations from the WHO. Fosun delivered the first doses of BioNTech’s vaccine to Hong Kong in February and began distributing doses to city residents on March 10.

In mainland China, meanwhile, the vaccine’s approval remains in limbo.

On Nov. 24, Fosun launched Phase II trials of BioNTech’s vaccine in China, testing its safety on a group of 960 volunteers, though similar trials in the U.S. and Germany already have concluded the vaccine is safe.

China typically requires foreign vaccine makers to conduct safety trials in China before approval, says Jennifer Bouey, an epidemiologist and China health policy expert at Rand Corporation. But in 2016 China started relaxing requirements for foreign drugmakers, which would allow the government to approve a vaccine without conducting safety trials in China first.

Fosun said the trial was an important step in meeting China’s regulatory requirements. The clinical study “provides key data for the launch of the vaccine in China,” Aimin Hui, Fosun Pharma’s chief medical officer, said in a November statement.

Fosun and BioNTech did not return Fortune’s request for comment.

Bouey says the vaccine’s trials in China could be completed any day since such tests typically take between three and six months.

Yanzhong Huang, a senior fellow in global health at the Council on Foreign Relations, argues the safety trials should be an unnecessary hurdle for Fosun given the WHO’s approval of the vaccine and its authorization in dozens of other countries.

“It’s surprising that instead of approving it right away, China is asking Fosun to repeat the same tests that have already been done elsewhere,” says Huang. “The data is already there.”

China’s National Health Commission did not respond to Fortune’s question on whether it is considering bypassing the safety trials and accepting the WHO’s recommendation.

China’s delay in approving the vaccine may involve more than regulatory concerns.

In January, Chinese state media outlets—including China’s largest newspaper, People’s Daily—published articles questioning the safety of BioNTech’s vaccine amid reports that elderly people in Norway had died after getting injected (Norwegian authorities found no link between the injections and the deaths.)

“We are in a time when vaccine use itself is becoming politicized,” says Huang. “You have seen state media promoting the safety and efficacy of the domestic Chinese vaccines, and discrediting the foreign vaccines.”

On March 8, Chinese foreign minister Wang Yi spoke out against vaccine nationalism but touted the efforts of Chinese vaccine producers. “The safety and effectiveness of Chinese vaccines are earning recognition across the world,” he said.

China has approved five vaccines for domestic use, but none of China’s vaccine makers have published late-stage trial data in peer-reviewed medical journals proving that they are effective. The latest COVID-19 vaccine approved for the Chinese public was developed by Anhui Zhifei Longcom Biopharmaceutical and the Chinese Academy of Sciences. The two entities have yet to release any data from Phase III clinical trials.

The public health benefits of approving BioNTech’s effective and proven vaccine are obvious, but in such a politicized environment the optics of releasing BioNTech’s vaccine domestically may be unpalatable for Chinese authorities, Bouey says.

Chinese authorities may want to avoid the possibility of the BioNTech vaccine proving more popular than the domestic shots, Bouey says.

“The rich and powerful could grab BioNTech’s vaccine first and cause social tension,” says Bouey.

Still, the pressure on China to approve the BioNTech vaccine may increase as Chinese vaccine manufacturers feel the squeeze.

China has set a goal to inoculate over half a billion of its citizens by the end of July. Beijing also has committed to sending at least 560 million doses to low- and middle-income countries around the world as part of its vaccine diplomacy campaign.

Currently, China is relying on homegrown vaccine makers like Sinovac, Sinopharm, and CanSino to fulfill those pledges. Together, the companies are exporting vaccines to at least 43 countries. But experts note the manufacturers are facing supply constraints amid rising global demand.

Ernan Cui, a China consumer analyst at Gavekal Dragonomics, said in a research note that China has the capacity to produce 460 million vaccine doses in the next few months, but that China’s actual output may prove significantly lower as manufacturers struggle to source products like vaccine vials.

Approving the BioNTech vaccine could help ease that pressure by adding the 100 million doses bought by Fosun to China’s domestic supply.

“China’s production [capacity] is slow compared to the urgent and unprecedented quantity of demand from domestic needs and countries they have signed contracts with,” says Bouey. “Additional vaccine supplies would be helpful.”