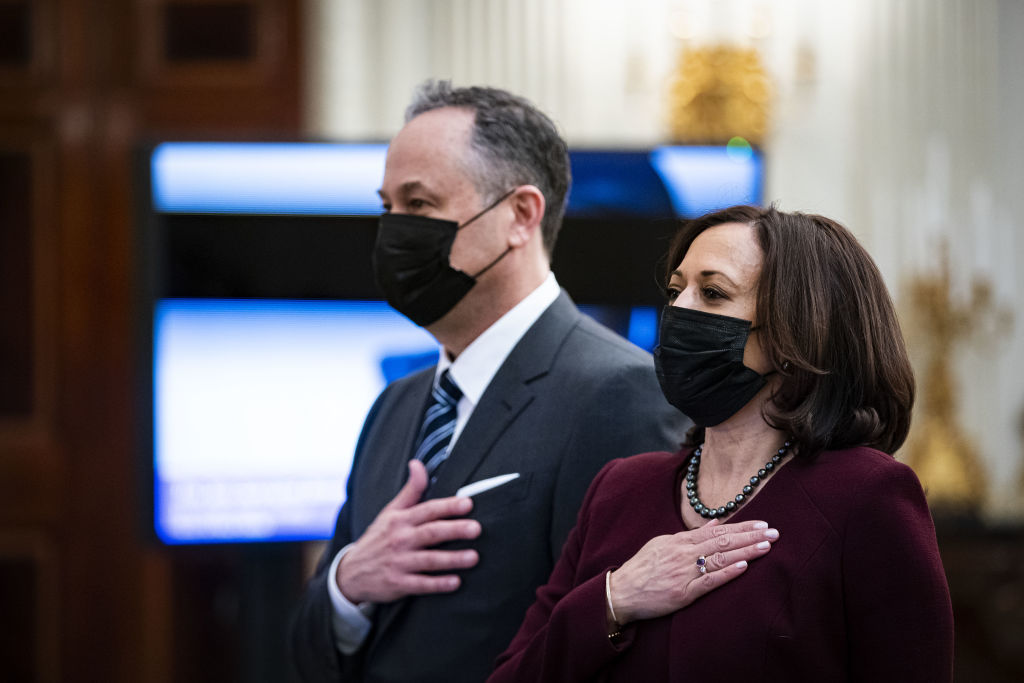 – Power couples. The many ‘firsts’ in the Biden administration aren’t alone in their history making; their spouses are breaking the mold too.

These husbands are now taking on the tasks usually associated with wives in Washington, from the practical—like settling the family in a new residence—to the politically advantageous—stepping back from previous professions, making public appearances, and carving out their own identities and agendas in D.C.

The new dynamic is no doubt forcing Americans to rethink the profile of a political partner, just as they shed preconceived notions about who’s fit to wield power in Washington.

At the same time, I appreciated the insight of Connie Schultz, a Pulitzer Prize-winning writer and wife of Sen. Sherrod Brown (D–Ohio). “We’re having these conversations now because men are becoming recognized in their spouse role,” she said. “Which is also frustrating when you’re a woman and have been doing this for quite some time.”

Even as we celebrate the actions of Emhoff and Buttigieg for shattering stereotypes, we can’t overlook that political wives have long provided the same kind of support and made the same kind of sacrifices with little to no fanfare.

- L says farewell. The Wexner era at Victoria's Secret is officially over after Les Wexner and his wife, Abigail Wexner, both announced they won't stand for reelection to L Brand's board of directors. Les Wexner was forced out as CEO of the company last year because of his relationship with Jeffrey Epstein. Wall Street Journal

- Court reform. Scotland’s second-most senior judge, Lady Dorrian, led a review of the country's handling of rape cases. The group recommended establishing a national specialist court to process sexual assault cases, where lawyers on both sides would be specially trained in dealing with vulnerable witnesses. The group's recommendations will now be considered by Scotland's lord justice general. Guardian

- Presidential succession. Vice President Samia Suluhu Hassan is set to take over as president of Tanzania after the death of President John Magufuli. She is poised to serve out Magufuli's term through 2025 and would be the first woman to be president in the East African Community bloc. Her first challenge would be addressing the COVID crisis, which has been severe in Tanzania following Magufuli's banning of the publication of infection data and declaring the country to be "free" of the virus. Bloomberg

-Know their names. One of the many upsetting things about mass shootings is how much we learn about the perpetrator—and how little we sometimes know about the victims. Learn more about Xiaojie Tan, Daoyou Feng, Delaina Ashley Yaun, and Paul Andre Michels—four of the eight people killed in the Atlanta shooting this week (the other four names have not yet been released) here: New York Times

- Weighty issue. NCAA coaches and players are calling out the blatant disparity between the weight rooms available to men's teams versus women's teams as each March Madness tournament gets underway in separate bubbles. The men's facility in Indianapolis is filled with dozens of sets of strength equipment while one women's facility in San Antonio features a single dumbbell tower that reportedly tops out at 30 pounds. The NCAA blamed space restrictions for the issue and said it was "actively working to enhance existing resources." Yahoo

- Olympic saga. As if the Tokyo Olympics needed another scandal, now the creative director for the opening and closing ceremonies, Hiroshi Sasaki, has resigned after he proposed dressing comedian Naomi Watanabe, who is plus-size, in a pink costume and calling her an "Olympig." Sasaki apologized "to all those whom [he has] upset;" Watanabe said she "hope[s] that we can all accept and respect each others’ individual traits and views to make the world a happy and bountiful place." Wall Street Journal

- Road to reauthorization. The House of Representatives voted this week to reauthorize the Violence Against Women Act, but most Republicans voted against the move. This version of the legislation strengthens protections for victims of sexual violence on tribal lands by non-tribal offenders and bars anyone convicted of stalking from obtaining a gun. Vox

- City and state. Some of the strongest critics of New York Gov. Andrew Cuomo throughout his sexual harassment scandal have been the female candidates for mayor of New York City. Several, including Maya Wiley and Kathryn Garcia, contrast their style of leadership with his; if either were to win this race, she would be the first female mayor of the city. New York Times

Racism against the AAPI community is a beauty industry problem Elle

"I'm lucky; I'm in control, unlike our protagonist."

-Comedian and actor Ilana Glazer on her own pregnancy. Her new movie is False Positive, a horror movie spin on Rosemary's Baby set at an IVF clinic.