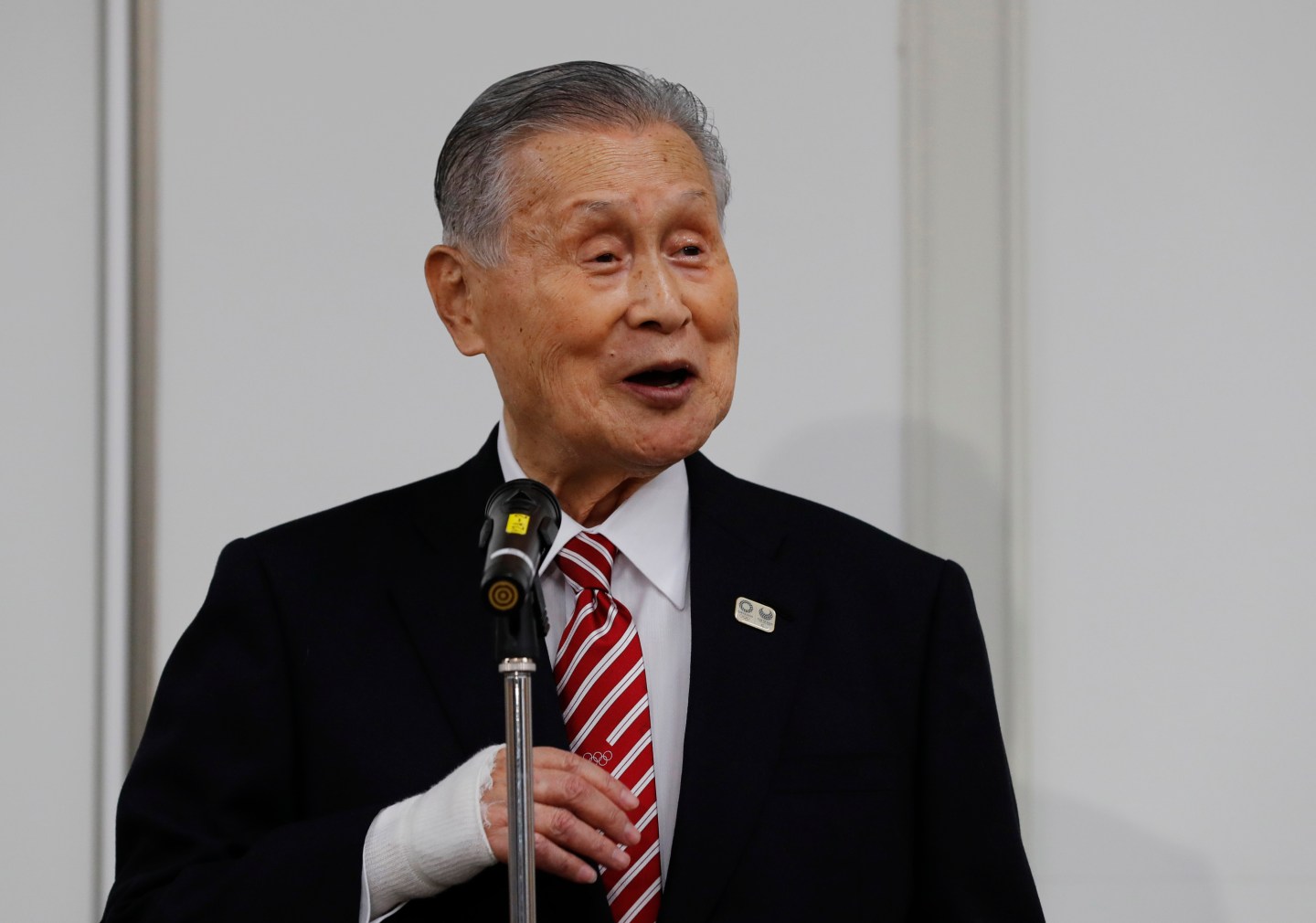 Good morning, Broadsheet readers! The House voted on the fates of Liz Cheney and Marjorie Taylor Greene, 23andMe will go public through a SPAC, and the Tokyo Olympics’ organizer is wrong about who chit-chats. Have a relaxing weekend.

– All talk.  The Tokyo 2020—now 2021—Games had enough problems. The Olympics slated for this summer have already been postponed because of the pandemic, public opinion in Japan is turning against the Games, and it looks like any spectators allowed to attend the event will be banned from cheering. (Claps only, please.)

And then on Wednesday, Yoshiro Mori, head of the Tokyo 2020 Olympics organizing committee, said that meetings with too many women drag on because women talk too much.

Mori explained the phenomenon this way: “Women have a strong sense of rivalry. If one raises her hand to speak, all the others feel the need to speak, too. Everyone ends up saying something.”

He made the comments as the Japan Olympic Committee Council discussed increasing the share of women members on sports organizations’ executive boards. “If we increase the number of female board members, we have to make sure their speaking time is restricted somewhat, they have difficulty finishing, which is annoying,” Mori said, according to Reuters.

Not only are Mori’s comments sexist, research suggests they are wrong. A review of research from 1951 to 1991 found that of 56 studies of mixed-sex interaction, only two said that women talk more than men. A 2012 study from researchers at BYU and Princeton discovered that women spoke much less than their proportional representation, spending roughly 75% less time talking than their male counterparts.

Still, women are perceived as talking more than men, even when they don’t, and while men benefit from talking more—listeners find them to be more competent—women don’t get the same bump.

To be fair, most of that research has studied English language interactions, but it’s hard to imagine the outcomes being much different in Japan, where men dominate politics and corporate settings. Japan ranks No. 166 out of 200 for female representation in parliament, according to the Inter-Parliamentary Union, well below Saudi Arabia and Pakistan. Japan was 121st out of 153 nations on the World Economic Forum’s global gender gap report last year.

Of the 24 members on the Japan Olympic committee, five are women.

Kaori Yamaguchi, a former judo champion, accused Mori, 83, of undermining the Games’ goal of promoting equality and inclusion. “Gender equality and consideration for people with disabilities were supposed to be a given for the Tokyo Games,” she said, according to the Kyodo news agency. “It is unfortunate to see the president of the organizing committee make a remark like that.”

Mori later acknowledged that his comments ran counter to the Olympic spirit, but he rejected calls to resign. And when asked if he really thought women talk too much, he said, “I don’t listen to women that much lately so I don’t know.”

Media coverage of his remarks mention that Mori, a former prime minister, is prone to gaffes like making insensitive references to AIDS and insulting his country’s Olympic athletes. He was one of the least popular prime ministers in Japan’s history and resigned after a year with an approval rating in the single digits.

It would be easy to read that history, roll your eyes, and think, ‘Well, what did they expect?’ But instead, perhaps we should be asking how he got his job in the first place.

- Cleaning House. Representatives in the House voted yesterday on two questions: whether to keep Rep. Liz Cheney in a leadership position after her vote to impeach President Trump, and whether to strip Rep. Marjorie Taylor Greene of her committee assignments over her past comments, including support for conspiracy theories and violence against Democrats. Cheney survived her vote; the House voted to boot Greene from her committee seats, 230 to 199.

- Continuing crisis. The NYT weighs in on the mental health crisis among America's moms with a multi-part package exploring women's experiences during the pandemic—and what might be done to help. New York Times

MOVERS AND SHAKERS: Katherine Maher will step down as CEO of the Wikimedia Foundation. Carol Juel, chief information officer at Synchrony, and Kimberly Scott, founding executive director of the Center for Gender Equity in Science and Technology at Arizona State University, join the board of nonprofit Girls Who Code. Mehvish Femia joins Resilience as general counsel.

- In conversation. For the cover of Time, poet Amanda Gorman and Michelle Obama are in conversation. The duo discuss Black art, calling this moment a renaissance. Time

- First mom. First Lady Jill Biden spoke to Parents magazine about her own time as a mom of young children working and studying for her degree. Of earning her doctorate in her 50s, Biden says, "I thought, 'What's stopping me?'" Parents

- Football firsts. Women have earned a lot of "firsts" in the NFL this year, from working as a full-time coach to officiating in the Super Bowl. Ahead of Sunday's game, many women in the sport say they're looking forward to a time when their presence is no longer a big deal. New York Times

- App issues. One of the financial supporters of the controversial app Parler is Rebekah Mercer, the GOP donor. The app's CEO, John Matze, says he was fired after a disagreement with Mercer. He says that she doesn't support imposing any restrictions on what users can say on the app—the issue that got Parler booted from app stores and Amazon Web Services. Mercer didn't respond to request for comment. New York Times

"You have to surrender to it and be like, 'This is what it is.'"