Disney+ is booming in India. Its secret? Cricket 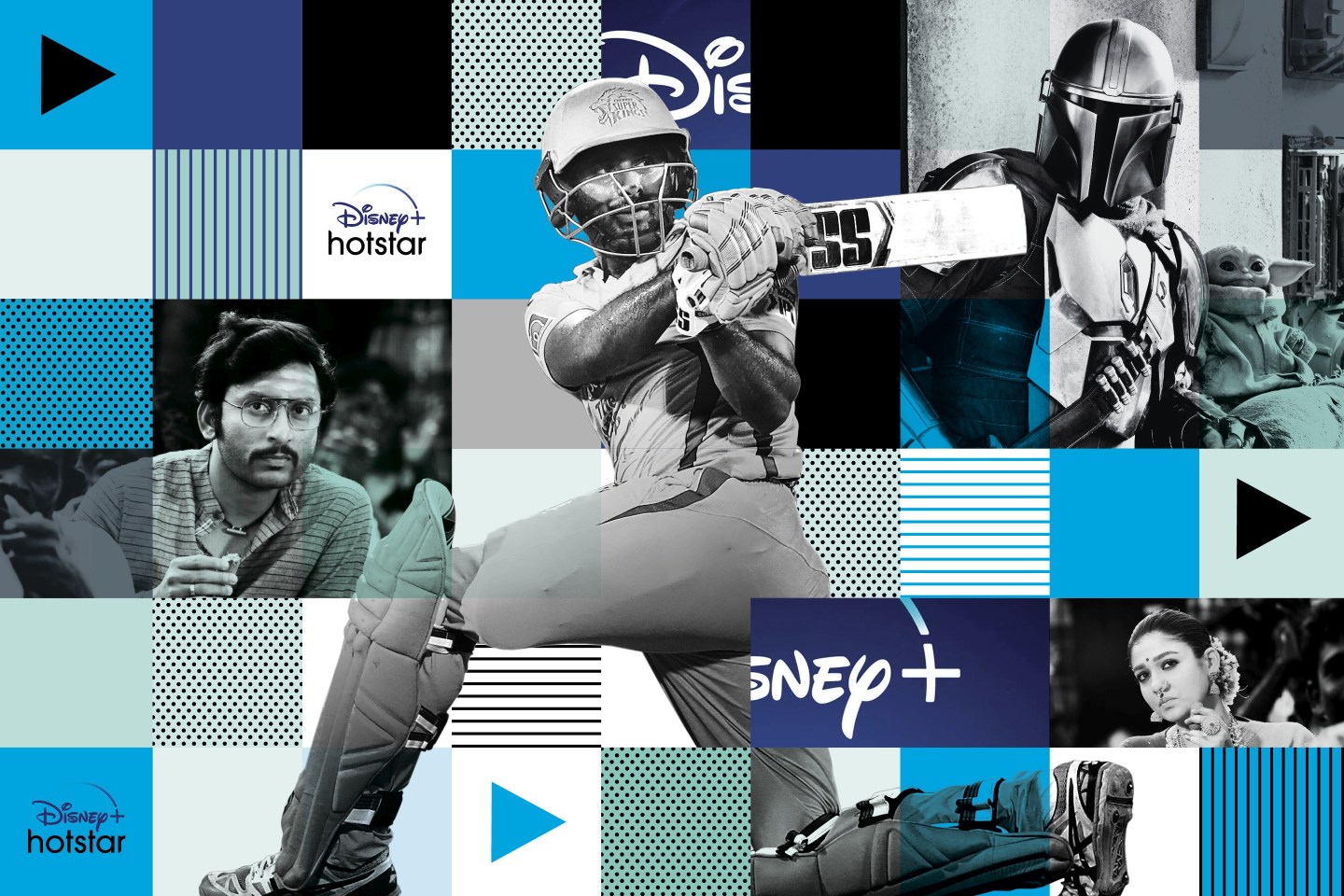 The cheer of a crowd erupted throughout the Sheikh Zayed cricket stadium in Abu Dhabi when Ambati Rayudu, batsman of the Chennai Super Kings, hit for six in the opening game of the Indian Premier League (IPL), smacking the ball out of the pitch. But as the camera tracked the ball’s arc into the stands, the roaring fans were nowhere in sight.

Like many major sporting events in 2020, the September season opener of the Indian Premier League had no spectators. The crowd sounds were recordings, piped through loudspeakers. But an empty stadium doesn’t mean no one’s watching.

In fact, 200 million viewers tuned in to watch the match live on TV and livestream, setting a new audience record for the IPL and scoring a victory for the league’s new and unlikely digital broadcaster: Disney+.

Disney+, the on-demand streaming service the Walt Disney Co. launched in November 2019, has proved more popular than even Disney dreamed. On the service’s first anniversary, Disney reported that the platform had over 70 million paying subscribers—10 million more than it expected to have by 2024.

“The real bright spot amid the pandemic has been our direct-to-consumer business, which is key to the future of our company,” Disney CEO Bob Chapek said on a November earnings call. Investors have responded with similar enthusiasm, pumping Disney’s stock up 30% since the call.

Few places have been as critical to that early success as India. In the year since Disney+’s launch, Disney+ acquired roughly a quarter of its new subscribers through a separate service Disney operates in India called Disney+ Hotstar. And India is key to Disney+’s future. Disney+ Hotstar users will account for 40% of the 260 million Disney+ subscribers the company expects to have in 2024, according to its projections.

When tallying up its Disney+ users, Disney pools subscribers from India along with subscribers from elsewhere, but customers on the subcontinent stand out for two reasons: They pay far less than American and European users, and Indian viewers aren’t necessarily signing up to view The Mandalorian or browse the Marvel Cinematic Universe. For the most part, they’ve come to watch cricket.

Star India, a domestic TV network with more than 70 channels, originally launched Hotstar in 2015 as a video-on-demand app. The ad-funded app gave users access to 35,000 hours of Star content—local and foreign shows, movies, and sports. The app’s launch coincided with Star’s acquisition of digital rights to the IPL—the most popular league for India’s most popular sport.

The Mandalorian on Disney+.
Courtesy of Disney+ Hotstar

“India is a cricket-crazy country, and it’s always been part of our strategy,” Disney+ Hotstar president Sunil Rayan says. When Hotstar first launched its streaming service, sports were available to all users. But after acquiring the five-year broadcast rights for the IPL in 2018, Hotstar moved its sports broadcasts behind a “VIP” paywall.

When Disney completed its $71 billion acquisition of Star India’s parent company, 21st Century Fox, in March 2019, Hotstar and its broadcast rights were brought into the House of Mouse. At the time, Disney’s plans for a streaming service were already in the works; buying up Fox’s assets expanded not only Disney’s content offerings but its access to India too. Disney has dubbed its original content in three Indian languages through Hotstar and commissioned original local-language programming.

The growth spurt came, in part, from the delayed start of the IPL season, from March to September. With all matches held in empty stadiums in the United Arab Emirates, Hotstar was the only place to stream league matches. Another source of growth was the expansion of Disney+ Hotstar into Indonesia in September, which introduced the brand to a market of 270 million people.

India is a cricket-crazy country, and it’s always been part of our strategy.

Unlike in the U.S., Disney+ Hotstar operates a three-tier subscription service. The most basic service is free but funded by ads; the VIP and Premium tiers cost roughly $5 and $20 a year, respectively. Users must subscribe to at least the VIP tier to view sports content. Premium users get sports, plus more Disney+ originals.

Users of the free service don’t count in Disney’s tally of Disney+ subscribers, but paying VIP and Premium customers do. As of December, the Disney+ Hotstar base had increased to roughly 26 million subscribers—30% of Disney+’s 87 million customers worldwide.

The rapid rise of Disney+ has captivated investor interest, but some analysts think hype about subscriber growth has obscured some troubling economic fundamentals. The one-third of Disney+ subscribers who are Disney+ Hotstar users are paying bargain-basement prices, dragging Disney’s average earnings per user down by $1 since Disney+ launched in 2019.

“While it is impressive that Disney has quickly created a business that is annualizing revenues of nearly $4 billion, the driver for future growth has to be more than just adding subscribers in India,” MoffettNathanson, a media consultancy, said in a November report.

Disney+ subscribers in the U.S. pay $70 a year, more than three times the Disney+ Hotstar Premium fees. According to MoffettNathanson, Disney’s revenue per user is roughly $1.65 in India, compared with $5.30 across its other markets. That’s because Disney+ Hotstar’s paying subscriber base is skewed toward cheaper VIP packages—the bare minimum for getting sports, which underscores how tightly Disney+ Hotstar’s success is tied to retaining its sports broadcast rights.

“If you were going to name a [league] that Disney will be extremely keen to keep, I’d say it’s the IPL,” says Vivek Couto, director of consultancy Media Partners Asia (MPA). Star India’s IPL deal expires in 2022, as does its partnership with the English Premier League and Formula 1. Its other sports rights last until the end of 2023.

Disney+ Hotstar’s revenue growth will likely come from adding new subscribers or upgrading VIP users to Premium rather than increasing fees. In December, Disney announced a $1 price hike for its monthly service plan in the U.S., effective this March, but Rayan says there are no plans to increase the price for Disney+ Hotstar subscribers at the moment. “Right now we’re in scale mode,” Rayan says.

According to PwC, the subcontinent is the world’s fastest-growing market for video-on-demand services in terms of revenue. If projections are right, India will be the sixth-largest market for video streaming worldwide by 2024.

Disney already has the second largest share of India’s online video market, with a 16% slice, according to MPA. That still leaves it far behind YouTube, which entered the market in 2005 and generates 43% of total market revenue, and only slightly ahead of Netflix. With competition growing in the congested market, where some 40 providers are jostling for position, sports is seen as key to stealing space.

Last November, Amazon Prime bought rights to broadcast New Zealand Cricket matches in India, starting late this year. Meanwhile, Facebook is trying to build up its Watch platform after underbidding on IPL streaming rights in 2017, offering $600 million. But in 2019, Facebook bought “digital content” rights for the International Cricket Council, enabling the social network to show match recaps and highlights on its Watch platform until 2023.

With Facebook and Amazon now challenging Disney+ Hotstar’s dominance in cricket, Disney will have to hang on to its broadcast rights while it finds ways to convert its sports fans into Disney fans.

This article appears in the February/March 2021 issue of Fortune with the headline, “Disney+ finds its all-star.”

Correction: This article was updated on February 1 to show Disney+ Hotstar has a 16% share in the India market. A previous version said 14%.