The case for disbarring Rudy Giuliani, other Trump lawyers—and even some lawmakers 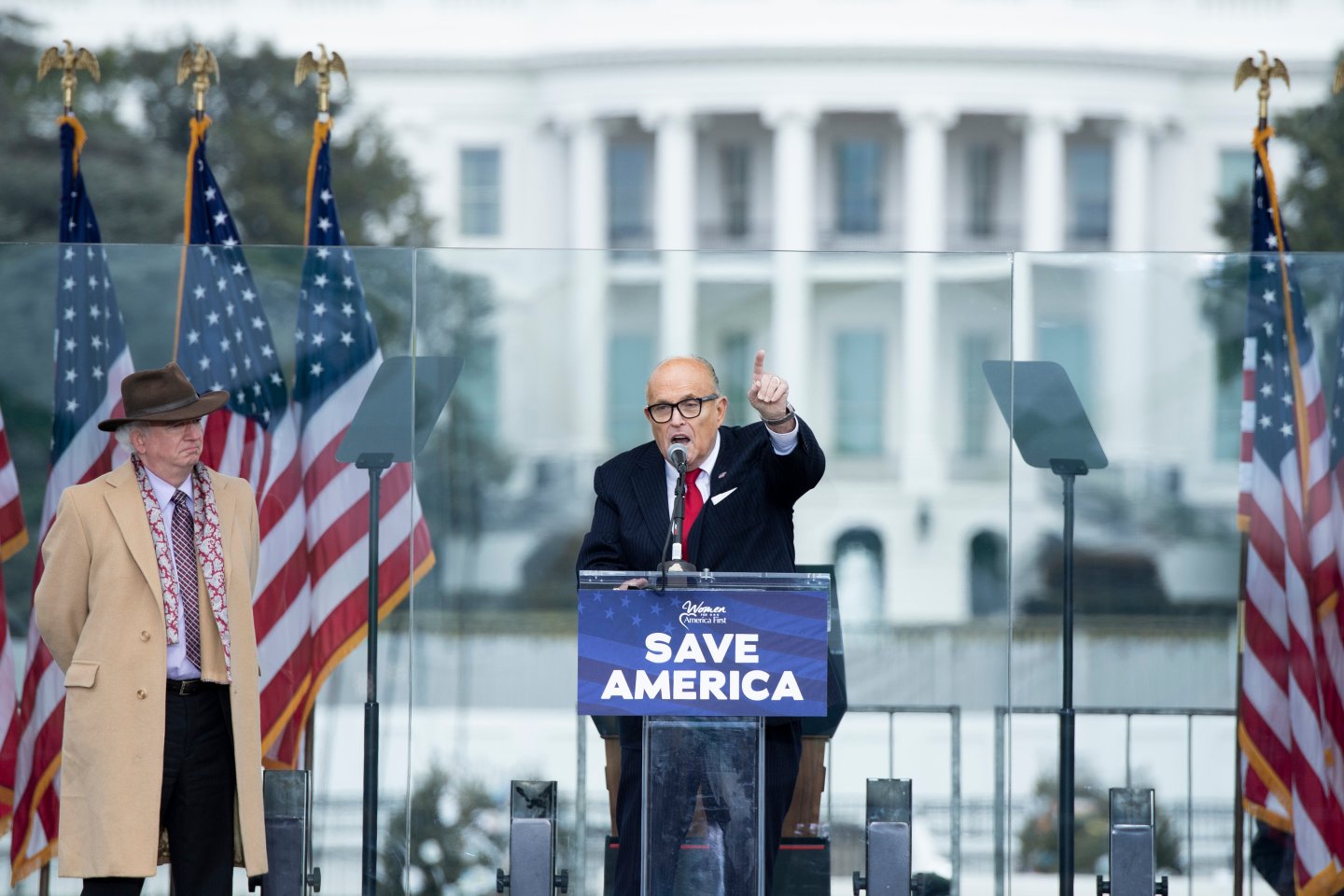 Given his role in promoting false election-fraud claims, “severe professional repercussions for Rudy Giuliani are necessary in order to show [that legal ethics] standards have any meaning,” writes the author.
BRENDAN SMIALOWSKI—AFP/Getty Images

The lawyers who have been complicit in Donald Trump’s efforts to overturn the election, bolstering both his baseless legal claims and his dangerous rhetoric, must be rejected by the legal profession.

Under professional codes of conduct across the country, attorneys are prohibited from engaging in “frivolous” conduct, and legal ethics generally prohibit lawyers from bringing claims for “improper purposes,” such as undermining an election. Conduct outside the courtroom matters, as well. And Scott L. Cummings, a legal ethics expert at UCLA Law School, summarized that being an attorney means “ultimately standing up for and promoting the rule of law as a core democratic value.”

To start, severe professional repercussions for Rudy Giuliani are necessary in order to show these standards have any meaning. As the President’s lead attorney, Giuliani championed ludicrous efforts in the courts to undermine President-elect Biden’s clear electoral win and foment the anger and distrust that led to the attack on the Capitol. Further, after failing to secure any meaningful victory in court, in the hours before that attack, Giuliani explicitly endorsed violence when he told the pro-Trump mob they should turn to “trial by combat.”

In New York state, an attorney can be automatically disbarred for serious drunken driving convictions. Waging a meritless legal campaign aimed at dismantling democracy and then encouraging an angry mob to swarm the heart of our nation’s government should result in penalties no less severe.

But focusing solely on Giuliani would belie the depth of wrongdoing that has occurred at the President’s behest. Giuliani did not act alone. More than 20 additional campaign attorneys worked to advance the President’s meritless lawsuits. Sidney Powell and Lin Wood parroted far-right talking points and brought claims meant to advance the President’s lies and conspiracy theories. Recognizing this, requests for Trump’s attorneys to be disbarred have been submitted in jurisdictions across the country. And in fact, judges themselves have begun holding these attorneys accountable. In Delaware Superior Court, for example, a judge removed Wood from a case, noting Wood’s role in contributing to the Capitol riot in addition to Wood’s “toxic” conduct. These are important, needed developments.

The seriousness of the harm that the President’s actions have brought, however, demands that the entire legal community take even broader action to protect the ethical standards of the profession.

A total of 126 House Republicans, many of whom are attorneys, signed on to a widely derided lawsuit filed in the U.S. Supreme Court that sought to overturn the election by blocking the results in Georgia, Pennsylvania, Michigan, and Wisconsin. The suit was spearheaded by the Texas attorney general and endorsed by well over a dozen additional Republican attorneys general—though not the Republican attorney general of Georgia, who called the suit “constitutionally, legally, and factually wrong.” To no surprise, the justices swiftly rejected the suit.

Yet just weeks later, 147 Republicans voted to overturn the election results, with many attorneys again being included in these ranks. Making these votes even more repugnant, they were cast just hours after the pro-Trump mob had descended on the Capitol and threatened the line of succession by putting Vice President Pence and House Speaker Pelosi in danger.

These actions were a clear threat to the rule of law, a threat these officials disregarded as they sought to advance their political careers. Those who assisted in Trump’s attempt to overturn the election to such a dangerous degree should also be barred from practicing law.

While it is true that disbarment is a punishment that’s rarely handed out, the extraordinary harms done to our country demand it. And for those lawyers in the President’s orbit who, for whatever reason, emerge with their licenses intact, the legal field as a whole must not provide shelter by extending lucrative employment.

We have already seen evidence of some firms acknowledging their responsibility in this regard. Prominent law firms withdrew from the President’s legal efforts. In addition, former Foley & Lardner partner Cleta Mitchell resigned just hours after her firm announced it would be investigating her involvement with the President’s campaign, after she was caught on an audio recording assisting Trump in pressuring Georgia officials to overturn their election results for him. This trend must continue, with pressure from the public and from clients to ensure wrongdoers face consequences for attacking our democracy.

Disbarment of dishonorable attorneys is far from the only type of accountability needed in the wake of the Capitol assault. But the legal profession must demonstrate its commitment to its own ethical standards by rejecting those who have advanced the President’s attempt to overthrow American democracy.

Maggie Jo Buchanan is the director of Legal Progress at the Center for American Progress.